Very few people know about an organization that has remained active in Genesee County for around 130 years. An essay commemorating the centennial, … And Fellow Members: A History of The Garland Street Literary Club of Flint, Michigan 1888-1988, was written by Alice Lethbridge in 1988 and published by the University of Michigan-Flint Archives. Since then, every new member receives a copy, and not only is the history of the club passed on, but most of the original rules are followed to this day.

According to Lethbridge, in 1888, at the elegant home of Sarah Durand at 718 Garland Street, seven women met: Jennie Chase, Minnie Jones, Lydia Beagle, Nell Randall, Kate Hotchkiss, Anna Hubbard and the hostess, Sarah Durand. These women were the wives of some of Flint’s most prominent men, and they all lived on Garland Street.

Motivated by the Victorian era’s urge for self-improvement, Durand invited her neighbors to form a literary club. This was not a book club; it was focused on learning and self-improvement. The Garland Street Literary Club required that members research and write papers on various topics, then present them to the rest of the members for discussion and a debate of ideas. 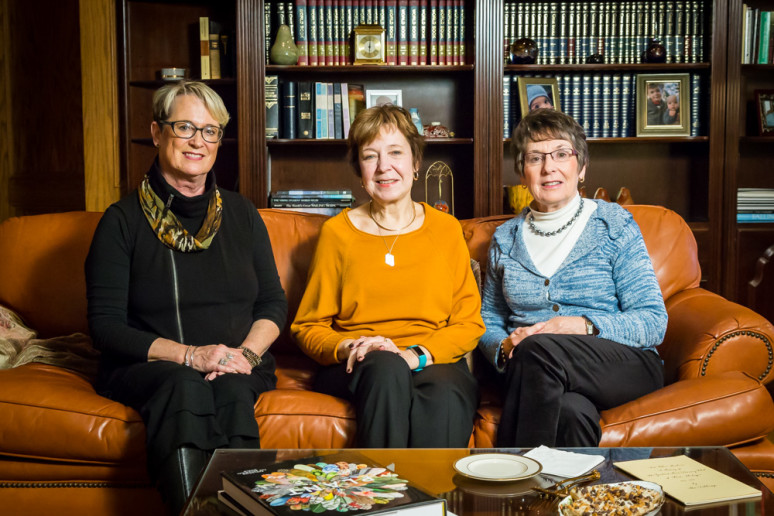 Lethbridge writes, “At the second meeting, eight more women joined, and articles, a constitution and bylaws were drawn up, approved and signed.” Positions such as president, secretary and “Critics in Pronunciation” were filled; membership was originally capped at 30 and only admitted by invitation, with approval by secret ballot. Barring some slight amendments through the years, the same Constitution stands and the current members abide by it faithfully, proud of their ties to the past.

As time went on and transportation became more readily available to women, rather than walk to each other’s homes on Garland Street, the group expanded to what now includes women across Genesee County; it wasn’t until 1914 that the group decided to begin holding meetings away from Garland Street. Lethbridge recounts, “Caroline Rankin is one notable member who was one of Flint’s first woman drivers, around 1912.”

Originally, the women met every Monday at 1pm to discuss their research papers, but that was changed in 1948 to every two weeks. Many of the handwritten papers and meeting minutes still remain archived. The papers range in topic, but often reflected their concerns at the time. For example, Lethbridge writes, “in its 50th year, they took up study on the industrial revolution. With Flint’s sit-down strike still fresh in memory, they heard papers on the labor movement, the contributions to America by immigrants and modern educational movements,” while papers in the 1940s reflected World War II. 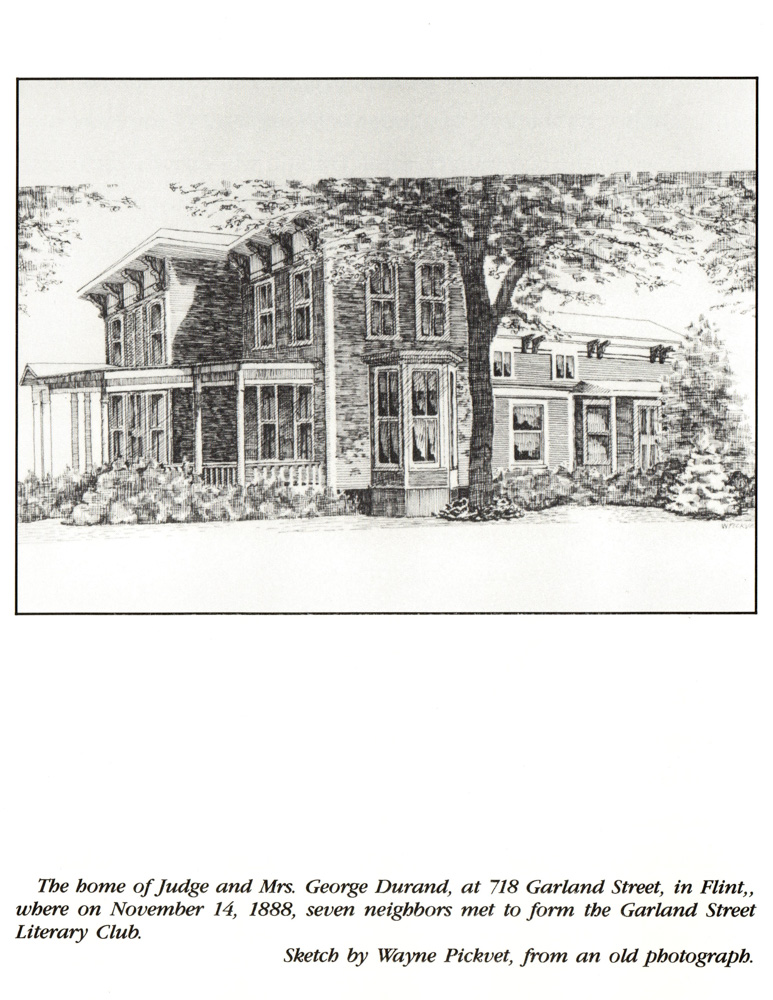 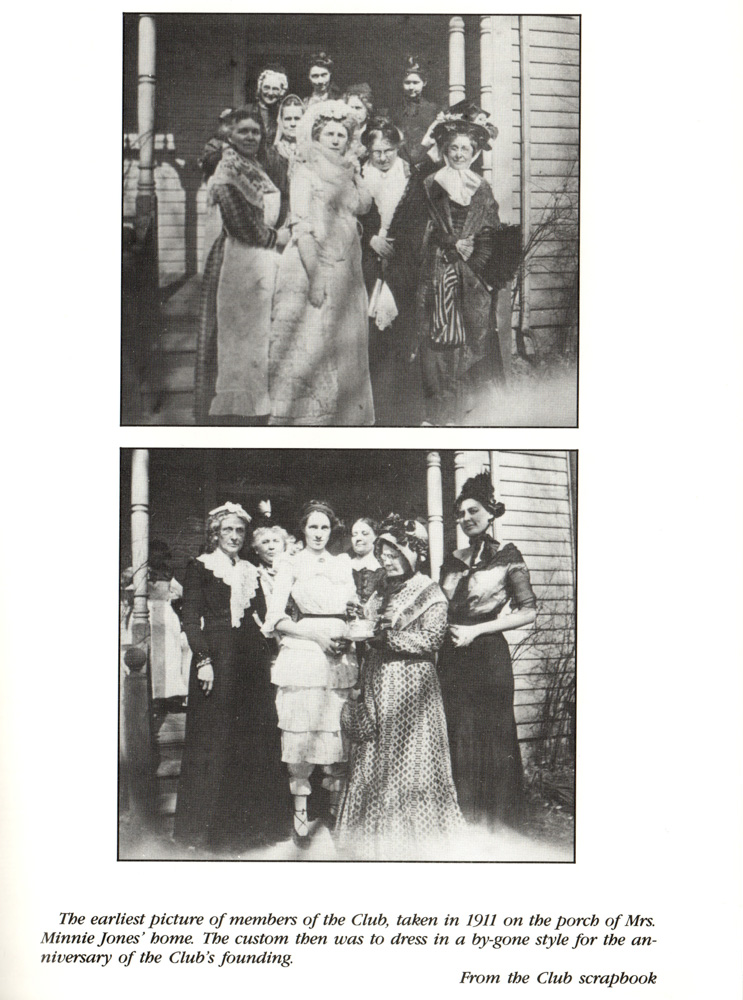 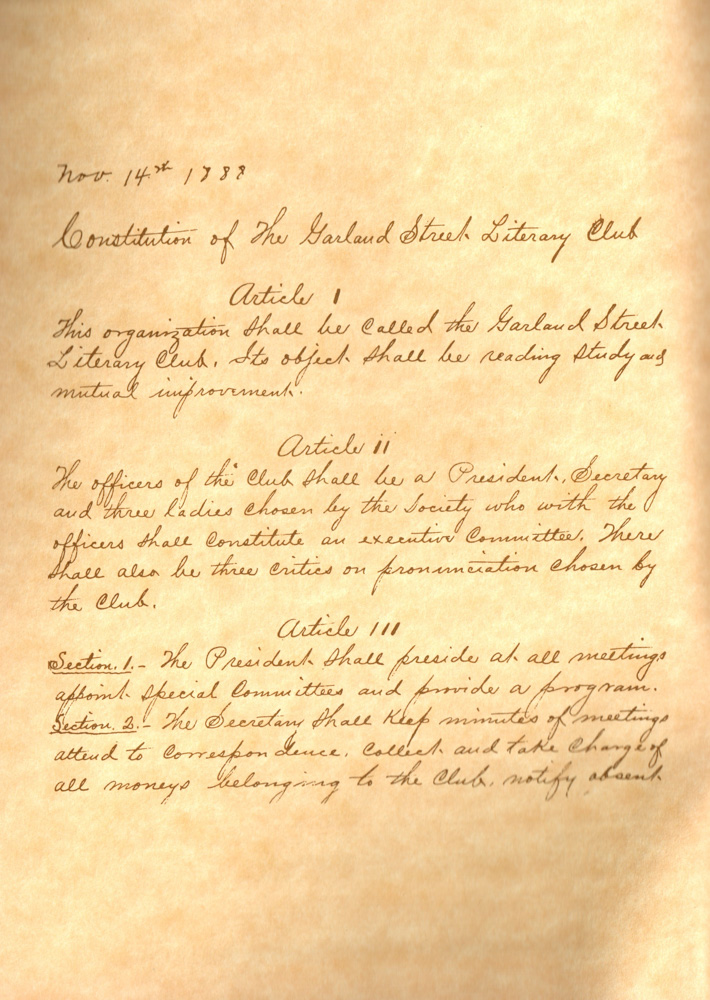 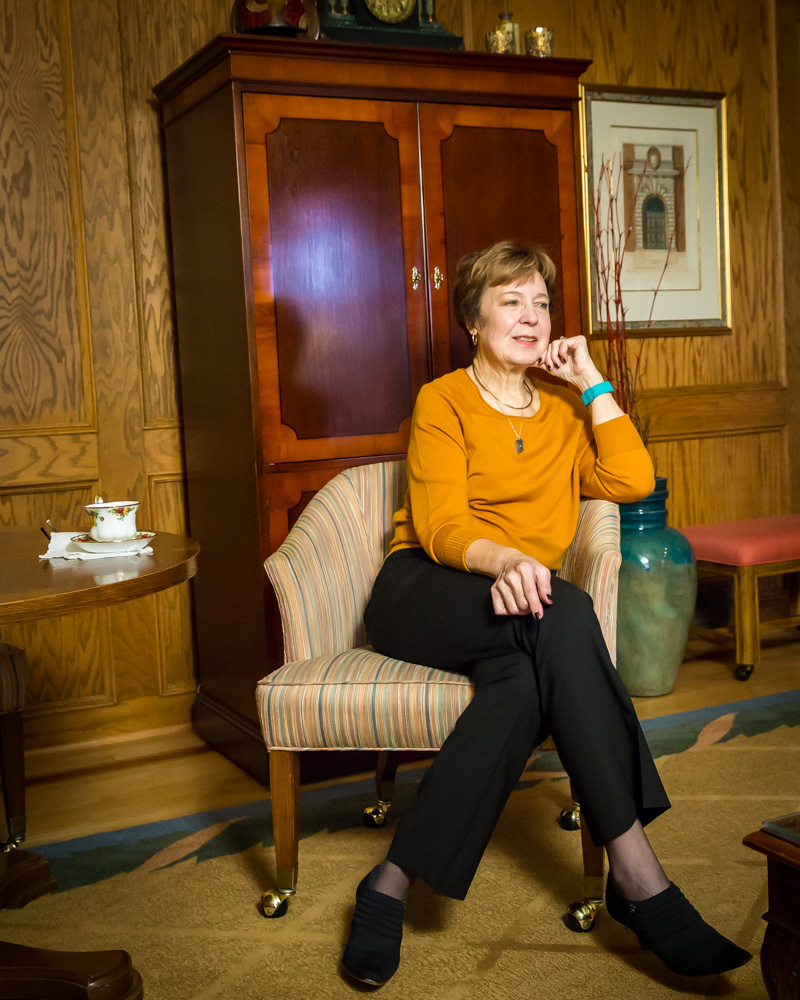 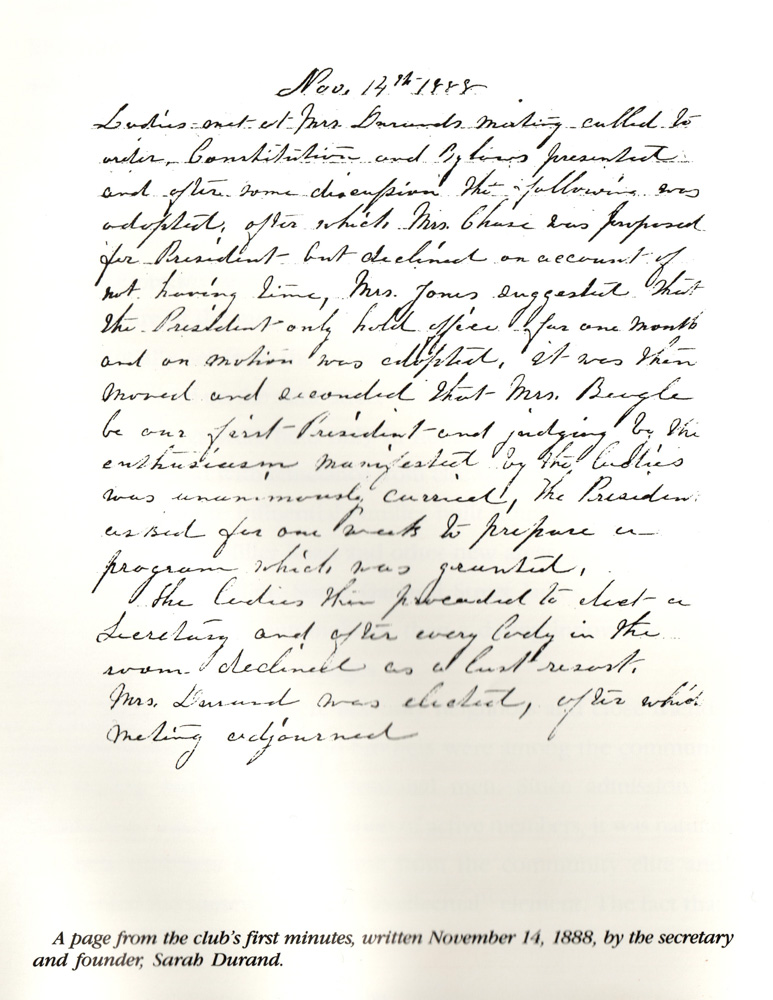 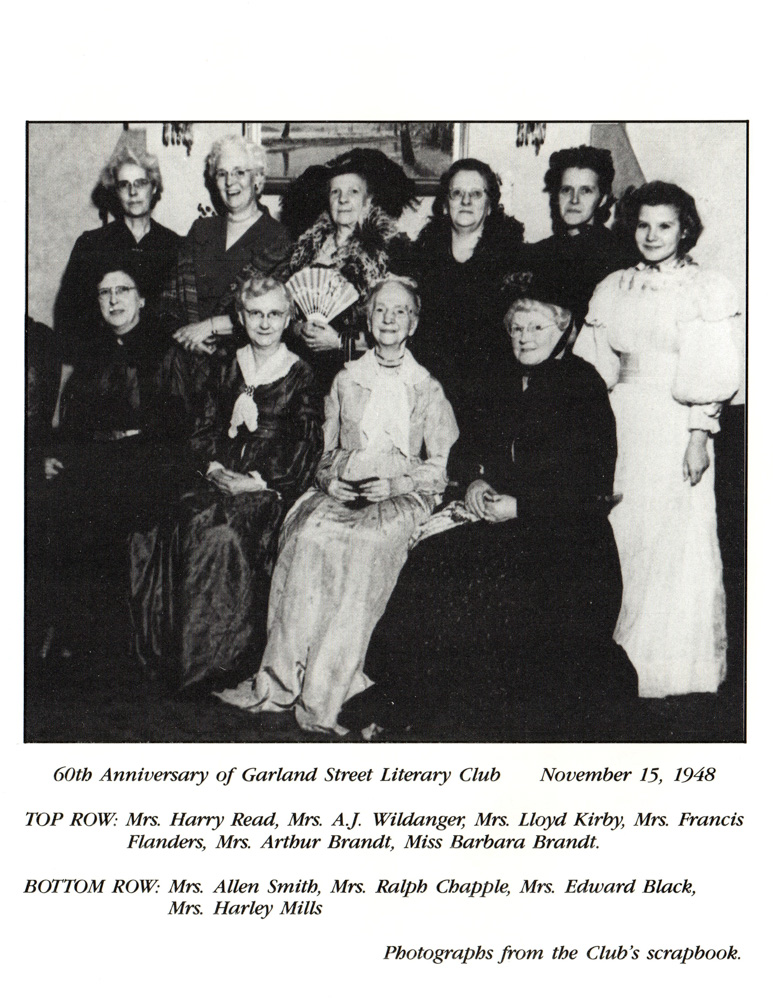 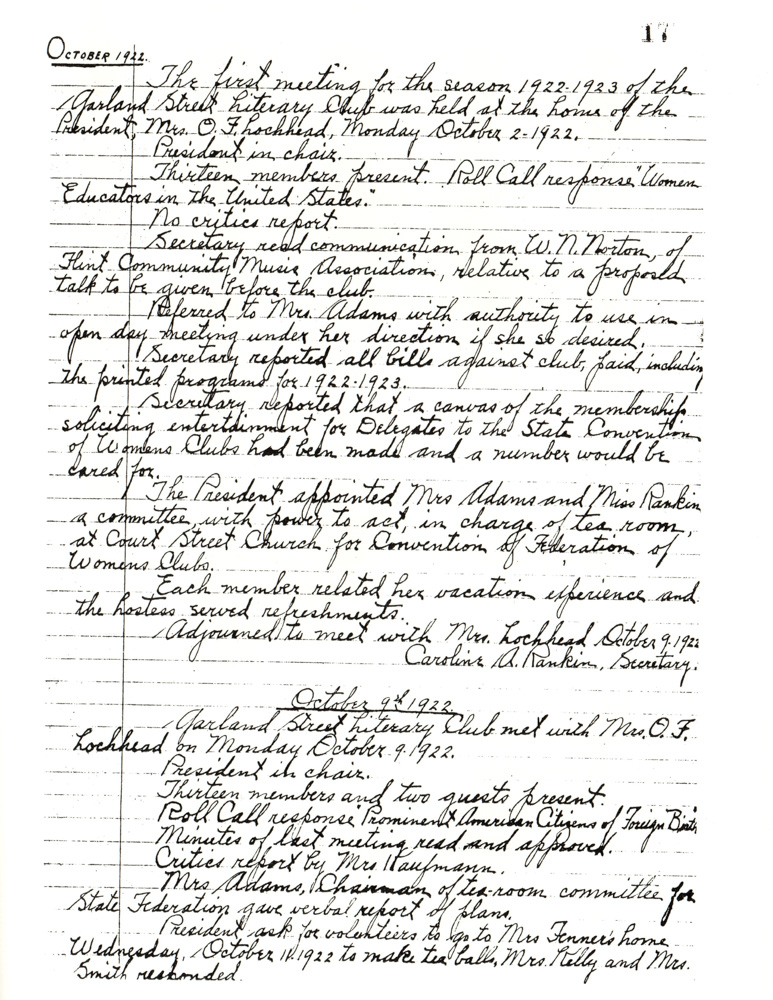 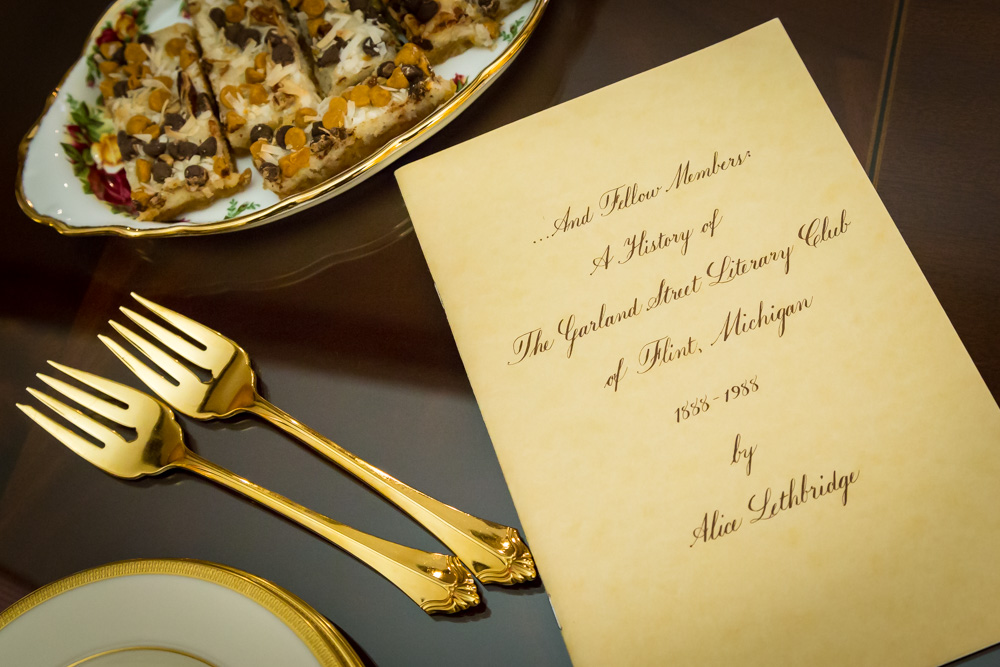 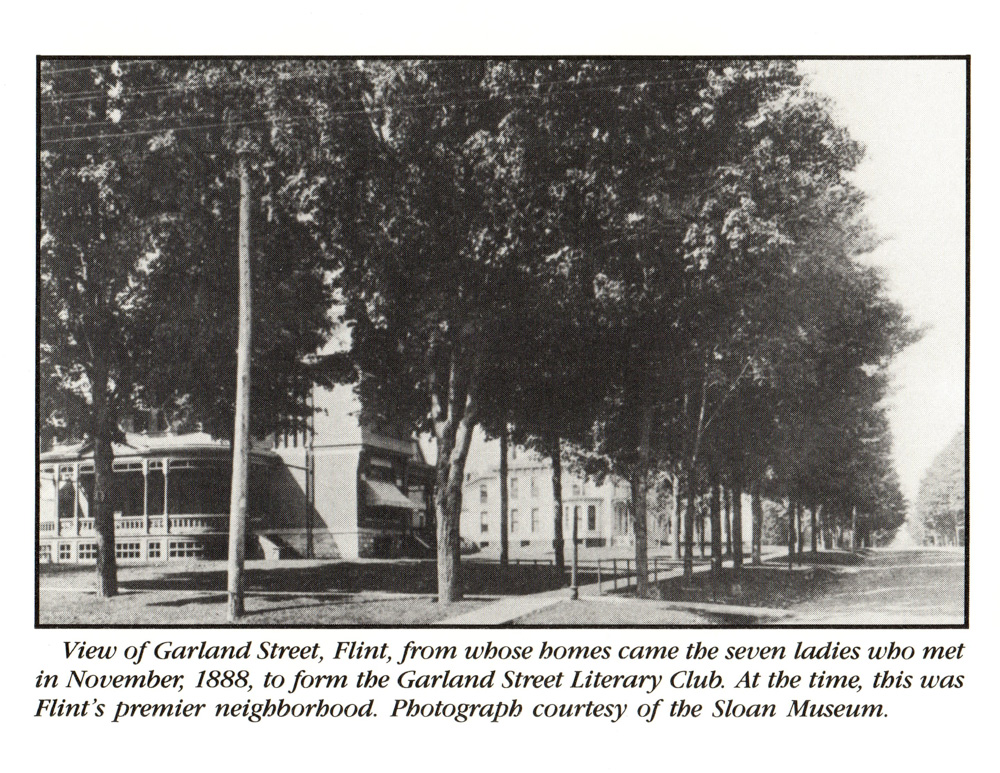 Pam McCarthy, Mary Kerscher and current President, Mary Ann Cardani are examples of the connecting threads found throughout the organization. McCarthy was invited into Garden Street Literary Club by a member, her daughter’s high school English Lit teacher, Sally Stevens. “She was so adamant about me joining, she said ‘you are going to love it’. It was at least ten years ago that I went with her and I have stayed ever since.” Cardani, a retired biology lecturer at UM-Flint, was invited by McCarthy. “Pam and I had been friends, and she mentioned the Garland Street Literary Club. At first, I thought it was a book club, and then she told me about the organization. I thought it sounded terrifically interesting, so it didn’t take much to convince me.” Kerscher, a retired middle school teacher at Davison Community Schools, was invited by Cardani. “I became a member one year ago with an invitation from Mary Ann to come experience the club and the speakers. There is an introductory period for a couple months when you can decide whether you would like to join, and they can decide if they would like you to be a member.”

In the late 1800s, when the club was formed, newspapers had “society” pages that would track the meetings of clubs such as this. Since that fell off decades ago, perhaps around the 1950s, the only way to know that the Garland Street Literary Club exists is to be invited by a member. Cardani explains, “It’s not an organization that advertises, so you won’t read about it; but if someone approached us, having heard about it, we would certainly invite them to come to a meeting and see if they would be interested in what we are doing.”

Membership requires that you present a topic at least once every two years, and you host once every two years. Cardani explains that it takes that long to get through all of the current members since they focus on one paper per meeting. “We have around 15 or 16 members. A few are inactive, which means that they have been with the organization so long that they come to the meetings, but do not have to present a paper.”

After she retired, Cardani was looking for something interesting and somewhat challenging, and found that in the Garland Street Literary Club. “Not only are the research and presentations interesting, but the women in this group are such interesting individuals. We get to know each other and learn things about each other that are always surprising.” Starting with the original members, the women of Garland Street have maintained active roles in their community, as well. According to Lethbridge, the club records show that the women often responded to the needs of the community and many were associated with the Red Cross and the YWCA, for example. McCarthy, who considers herself “a professional volunteer,” has been a lay counselor and lay teacher through places like The Gerholz Counseling Center, housed in first Presbyterian Church of Flint.

The club has another charming attribute: each member has a pendant that signifies their membership. Cardani explains, “maybe a generation ago, these pendants were made by a member’s niece. They are not ours to keep – when we leave the organization or pass away, they’re sent back to the group so that new members can have them. It’s a beautiful little symbol, because it is a book with a pretty stone in it, as a reminder of what our founding women set as a goal: to enrich themselves, intellectually.”

They agree that what keeps the Garland Street Literary Club going is the camaraderie, the idea that you are never finished being educated, and the sense of history. McCarthy, a long-time Flint resident, explains, “there is a sense of wanting to continue, of feeling connected to Flint and keeping the history going. It is quite a record, and you get a real sense of pride from these women who have been in it 20, 30 and up to 40 years. They have raised families and traveled and done all of these things and still have always been a part of Garland Street.”

Cardani adds, “I was delighted that Pam invited me and I have been really delighted to work with the organization. I served as secretary for a couple years, and am now serving as president. I am interested in making sure the organization has a history beyond us.”
Photography by Eric Dutro