Fernando Silverio Solis asks this question of his audience and most importantly, himself, in an original song that more than any other expresses his perception at this point of his life. After decades on tour performing for thousands of fans in musical genres that never quite felt like his own, the singer/songwriter has finally found his inner voice and a new way to express it; a style he found long ago but never had the time or the confidence to try. “I always dreamed of becoming a singer/songwriter,” says Solis. “I was fascinated by the sort of ‘blue-collar’ songwriters like Bruce Springsteen, Neil Young and Billy Joel. It feels good now to do it myself.” Today, Solis describes his music genre as “Americana; a portrait of the working class in the United States – of love and loss,” and it’s something very different for his past fans and a far cry from the music of his beginning …

I make my music and I’m creative and expect nothing in return. Whatever happens is cool with me.

Solis grew up in Flint and attended Flint Central High. “I was born in Fairfax, VA but it’s just where I was born, not where I’m from,” he states. “I’m from Flint and that’s something I’m proud of.” As a child, he was interested in music but it wasn’t until middle school when his love affair with it began. “I really got into punk and nu metal – bands like Korn and the Deftones,” he remembers. His love continued into his high school years when the relationship started to become serious. “A friend took me to Flint Local 432 for the first time and I was blown away,” he shares. “The energy was incredible and being there, I felt like I was really a part of something. Everyone was so welcoming. The show featured a lot of punk and ska bands and one had a bassist who was having the time of his life. He looked so cool. From then on, I wanted to play the bass. I was hooked.” Solis, who was beginning to learn acoustic guitar at the time, immediately put it down and asked his parents for a bass and, although they didn’t understand why, they indulged him. “They got me a black Squier brand bass that I still have somewhere, all beat up,” he laughs. From then on, Solis made it a point to attend as many shows at the Flint Local as possible and even began volunteering there. Through a magnificent loophole, he was able to use his time working at the Flint Local to meet the community service requirements for the National Honor Society in school. “I still can’t believe that worked,” he says with a chuckle. 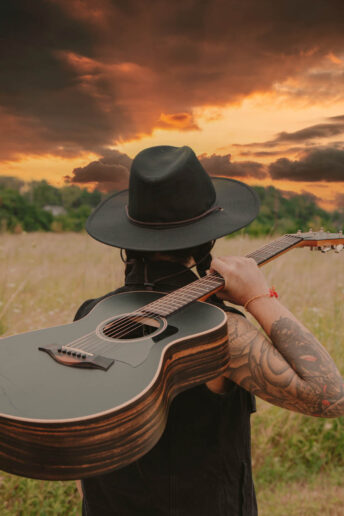 Working at The Local and meeting other musicians gave him confidence and soon enough, he was in a band of his own: Offing Ingus. They played nu metal and high-energy shows and enjoyed a small amount of local popularity. “While growing up, I always felt apart from other people in a way,” Solis remarks. “Being in that first band made me feel valued and connected.” He finally became devoted to music full-time and he dedicated the majority of his time to the wild thrash scene. “I loved everything about it,” he adds. Still, something was missing. “I was having fun but the music we were making didn’t sound like me,” he explains. “There was something about myself that wasn’t being explored.” When Offing Ingus began to dissolve, a friend introduced Solis to a band called Bright Eyes. “It was exactly what I needed at the time,” he explains. “It was a different type of music that showed it was okay to explore mood and emotions and following that, I picked up my acoustic guitar for the second time.” He just as quickly dropped it again when he and friends formed the indie-rock band Remember Me, and Solis tried his hand at writing lyrics for the first time. “They were the worst,” he admits. Next, came the band The Transatlantic Sail and its offshoot, I Am the Sky. “With those early bands, I had no idea of monetary success. We didn’t care about money at the time. We were so naïve – we thought success would just magically happen,” he states. After high school graduation, his parents began to question the path he was on and wondered about his future. Solis was beginning to wonder, himself. “I had no idea what I wanted to do or where I was going,” he says. “I went to college for a little while but that didn’t last long. So, I decided it was time to get serious about music.” With friends, he formed nu metal band 1876 and began to set immediate goals. He and his bandmates thought they had it all figured out; they had a plan and felt as if stardom was inevitable. It was during this time that Solis got married and had a daughter. “I had a family and I was working a job while traveling with the band,” he states. “We were doing well and filling venues, or so we thought. It still wasn’t working and we kept pushing back our goals. We were getting frustrated.” Solis soon realized that his time with the band was a strain on his marriage and made the tough choice to step away. “I told the guys that I had important things to attend to at home and couldn’t go on. I felt like I was letting them down.” Although his marriage would eventually end, Solis cherishes the time he spent with his wife and still maintains an amicable relationship. “She loved the Beatles and I heard them nearly every day. I started to listen to how they wrote music,” he says. While separated from 1876, Solis finally found the time and place to write the kind of music he needed to. “The whole time, through all the early chaos, I was learning to be a musician but I wasn’t learning to be the singer/songwriter I always wanted to be,” he says. He picked up his acoustic guitar for the third time, dusted off an old MacBook given to him by his uncle for college, and began to write and record music that was closer to his heart. He released a collection of songs under his full name and complete with music video.

After all of it, it’s the tenacity that comes from being a part of Flint that has helped me continue creating. It’s a part of everyone here. It’s in our blood.

“I shot and scored a short film called ‘Memories’ with a friend and we were able to show it to a live audience,” he adds. Solis had taken his long awaited first steps. His world was quieting down and he began to listen to his inner self and show vulnerability in his music.

Solis took one more chance with 1876 and played some big shows but the band self-destructed, essentially tying off one more loose end and allowing him to go into his singer/songwriter career – leaving metal behind, with no regrets. “Things were becoming more important,” he explains. “I couldn’t use the music to support my daughter and I was finally beginning to understand. We had been too impatient. As a musician, I have realized that patience is important. I was making music, continuing to be creative and putting it out there … and people were responding.” Solis jumped into Americana and played and wrote for a band called Goldblum for a little while, which ended around 2018. “I held some songs back for myself and as Goldblum was ending, I recorded them with veteran musician Nick Diener (The Swellers) at his studio. During the pandemic, I released a four-song EP and never looked back.” 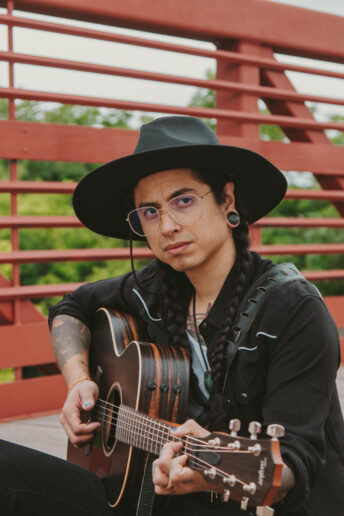 Through all of the ups and downs, failures and success, Solis wouldn’t change a single step of his journey. He has learned about patience, confidence, humility, understanding and most importantly, himself. He remarried in 2019 and now spends his days being of service to people in his full-time job. His recent music is some of the most heartfelt, melodic and relatable of his career and has brought him more success than he dreamed. Every positive word he hears and every show he plays is a gratifying surprise. “I feel like I am finally starting,” he smiles. “I have a whole new perspective and I am grateful for what I still get to do musically.

I make my music and I’m creative and expect nothing in return. Whatever happens is cool with me.” Since performing solo as Fernando Silverio Solis, he has opened for notable acts such as Craig Owens (Chiodos, badXchannels) and Mike Kinsella (Owen, American Football), has played numerous local shows in Flint and Detroit and gained a whole new fan base. The acoustic guitar, he is proud to say, is finally here to stay.

Recently, Solis put together a new band: Fernando Silverio Solis Y El Sueño with John Guynn (guitar), Jacques Doucet (guitar/slide), Austin Conquest (bass) and Ryan Gregory (drums) to help expand his new sound. Out of all of his past confusion and chaos, Solis has made his peace with music. So, is he happy here? “I am happy. Here is pretty good,” he says with a smile. “After all of it, it’s the tenacity that comes from being a part of Flint that has helped me continue creating. It’s a part of everyone here. It’s in our blood.” 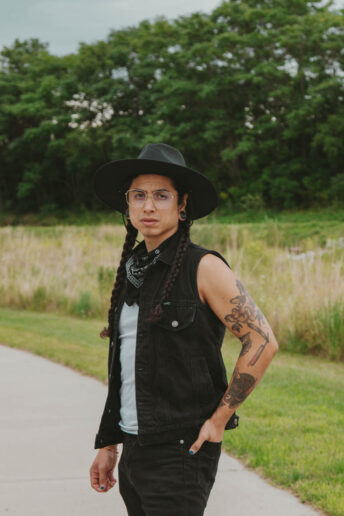 The music of Fernando Silverio Solis is available on all streaming platforms and YouTube, including his newest album “Somebody That You Keep Around,” past favorite songs “Are You Happy Here” and “When the Good Starts to Fade” and more.