The holiday season had just ended, but she was receiving a bonus gift.

One of the finest soccer talents Genesee County has ever produced, Webber assumed she had played her final game in the area when her storied Grand Blanc High School career concluded in 2019. She moved on, making an immediate impact at Michigan State before transferring to Indiana last season and establishing herself as one of the Hoosiers’ most dangerous offensive weapons.

Returning to Grand Blanc late last spring, Webber spent the college offseason playing for Corktown AFC, based at The Corner Ballpark on the site of what was once Tiger Stadium in Detroit. She helped Corktown to a 15-4-2 combined record in two leagues – United Women’s Soccer and UWS 2.

Webber was intending to endure the 60-mile commute to again play for Corktown this year, but on January 5, Corktown announced it was forming a partnership with the wildly-successful Flint City Bucks and rebranding as Flint City AFC. Both teams will share Atwood Stadium.

“I was super excited and relieved that I would not have to drive an hour nearly every day for practice or meeting up with the team to travel to games,” says Webber, who scored more than 100 career goals for the Bobcats and was an All-State Dream Team pick as a senior. “Now, it will be easier not only for me, but for friends and family to see me play. We are all elated to play in front of the Flint City Bucks great fan base.”

Webber, one of two Flint-area players on the roster along with Fenton’s Emma Hiscock, has a message for that fan base which saw the Bucks win the most recent of their four national championships in 2019:

They will love watching the new team in town just as much when Flint City AFC kicks off its season by hosting Ann Arbor FC on May 7.

“Fans are going to see very exciting, winning soccer in a great atmosphere, just like at Bucks games, because we have top-level players from some of the best college programs in the country who all set high standards for themselves,” Webber says. “They will see skilled, physical and very competitive players coming together to win games.”

Not surprisingly, Corktown Founder and now Co-owner Eddie Hudson also can’t wait for Flint-area fans to experience the product Flint City AFC puts on the pitch. The pre-professional team will compete in the Great Lakes Division of the new USL W League.

“We want to maintain the high standards set by the Bucks,” Hudson says. “If you enjoy soccer and a good night out, you are going to enjoy watching Flint City AFC. We play the game beautifully and we win. That’s what most supporters are looking for from their club.”

The club has been exactly what Webber was looking for when seeking a place to strengthen her skills.

Webber, a forward, joined Corktown after a notable first season at Michigan State during which she was the only freshman to start every game and finished second on the team in points (14), goals (six) and game-winning goals (two).

The pandemic, however, canceled Corktown’s 2020 season and postponed Michigan State’s fall season until the spring of 2021. Webber played a few games before entering the transfer portal and deciding to go to Indiana soon after Corktown’s season began.

After helping Corktown reach the UWS playoffs, Webber joined Indiana and led the Hoosiers in goals last season with five, including becoming the first Indiana player to score three goals in a game in nine years. She added an assist and totaled 17 shots.

“Being among all this talent has been a great, competitive environment to work on improving my skills,” Webber says. “All of us bring different approaches to the game and styles from our college programs which we all benefit from.”

Hiscock, a midfielder, has four goals and an assist in 23 games for the University of Louisville the past two seasons. She also contributed to a Cardinals defense that allowed only 1.69 goals per game last season and is another of this year’s returning players. 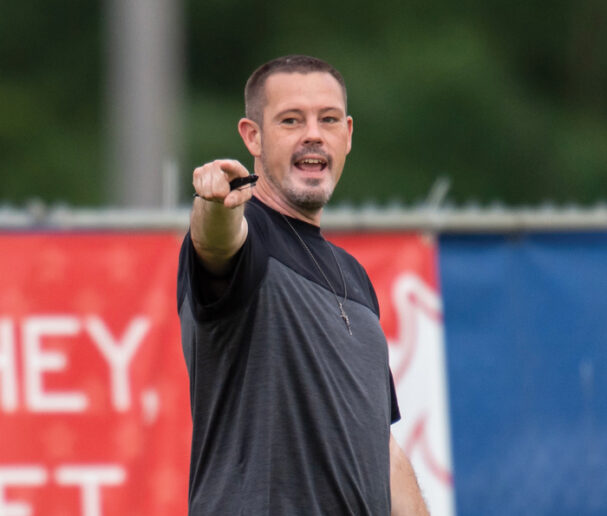 “I expect Emma to be a big-time player for us,” Flint City AFC coach Aaron Roy says.

As gifted as Webber and Hiscock are, however, they are not even among the eight players on this season’s roster who have made college all-conference teams, five of whom also earned UWS honors last season.

“We have a large, deeply-talented player pool to draw from which means we are going to be pretty good,” says Roy, whose team lost its playoff game on penalty kicks last season. “We will always be able to put a talented, competitive lineup on the field. Our biggest strength will be the ability to defend our goal with such a strong backline and goaltending.”

Leading that defense is UWS Midwest Division Defensive Player of the Year Lexy Smith (Ball State), also an overall UWS second team pick last season. She led the squad in minutes played and was a major reason Corktown gave up only 17 goals in 11 UWS games, including two shutouts.

Leading scorer Itala Gemelli (University of Dayton) is also back. She is a two-time Atlantic 10 Conference Offensive Player of the Year and finished with 12 goals and 28 points in 17 games for Dayton last season. She also made the UWS third team and Midwest Division first team. 

Ashley Barron (University of Cincinnati), a center back, made the UWS Midwest Division second team last season and is the two-time American Athletic Conference Defensive Player of the Year and a three-time, first-team All-AAC pick.

“I know we are going to do very well in our first season in this new league,” Barron says. “We have more depth than last season and many players who are ready to make an impact. We’ll have a very competitive practice atmosphere which will really help us in game settings.” 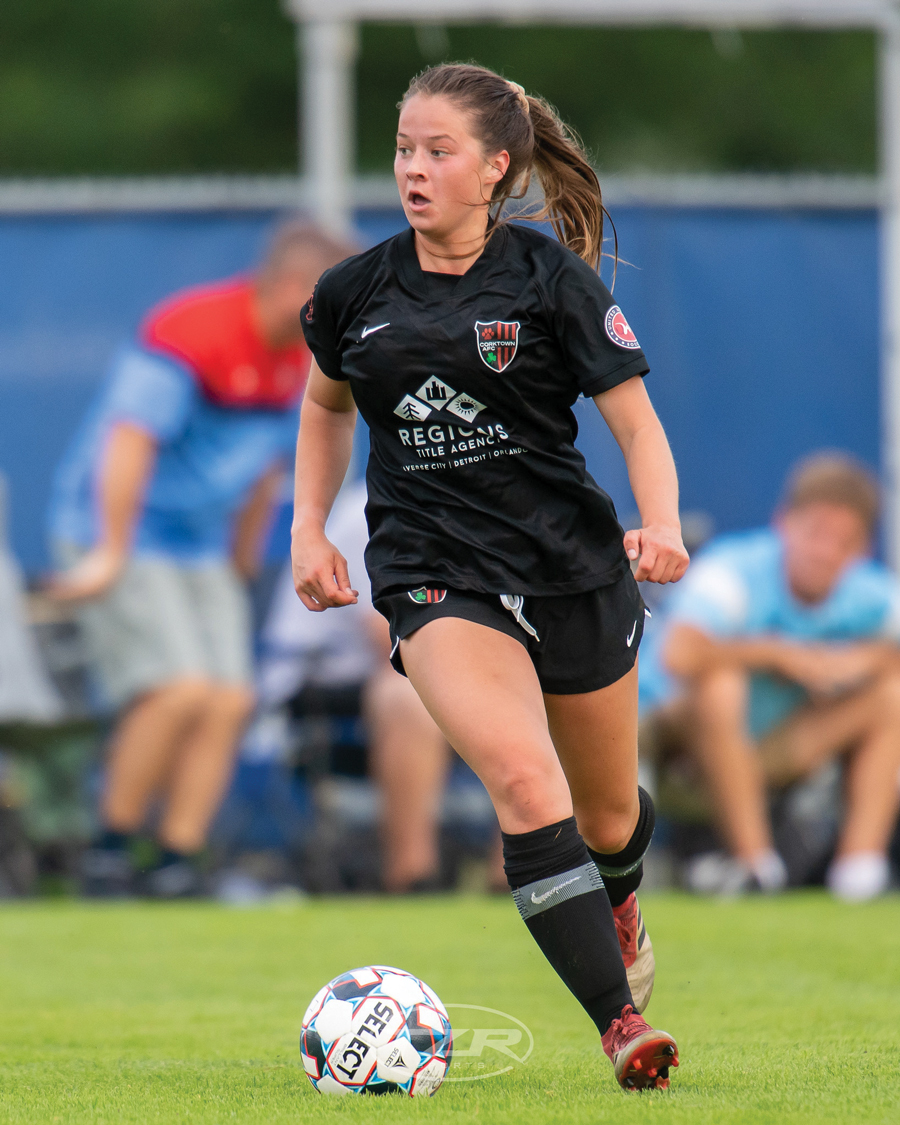 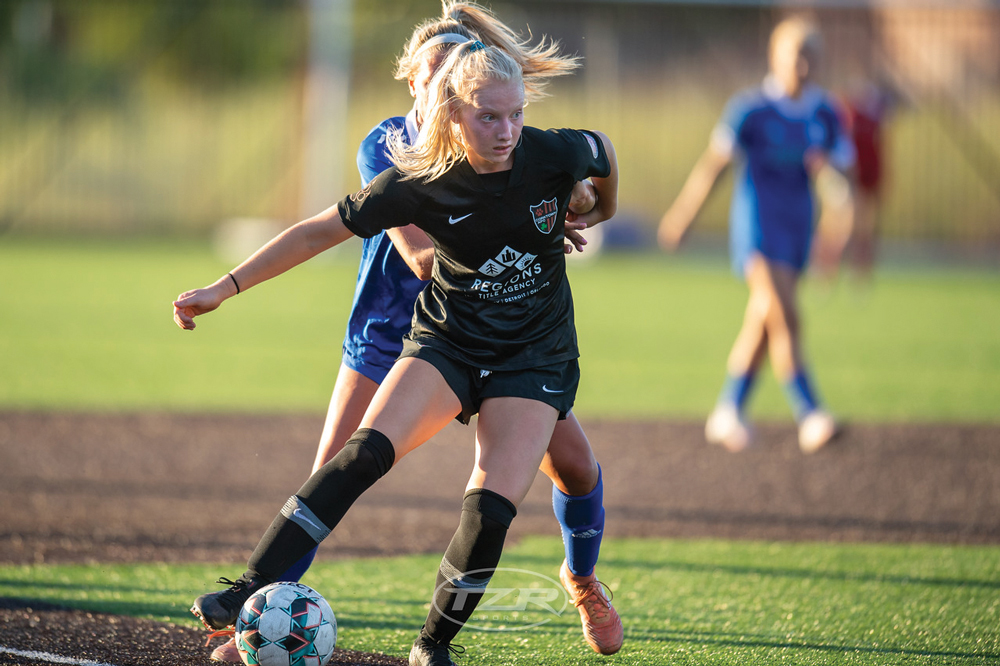 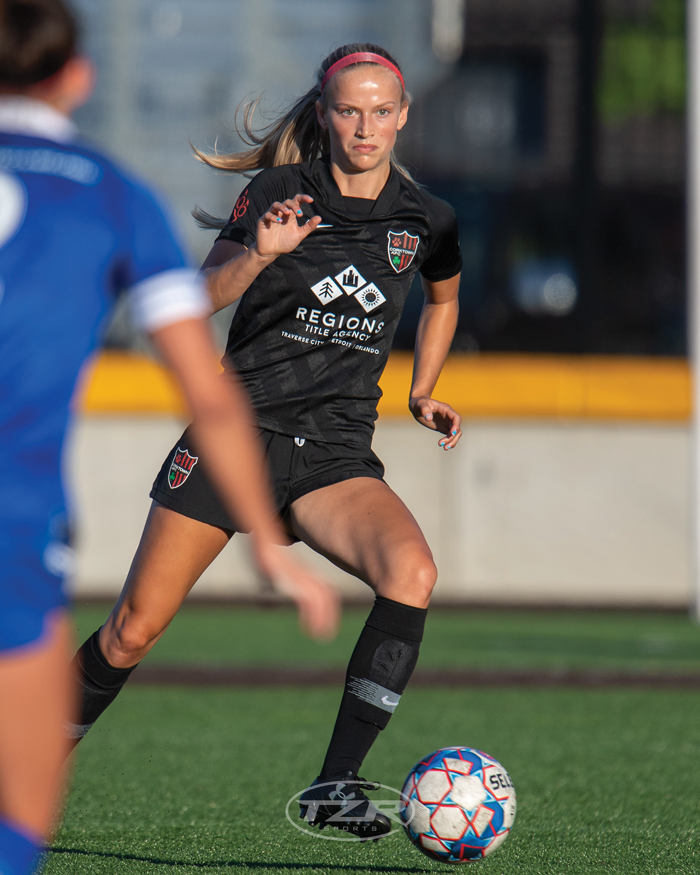 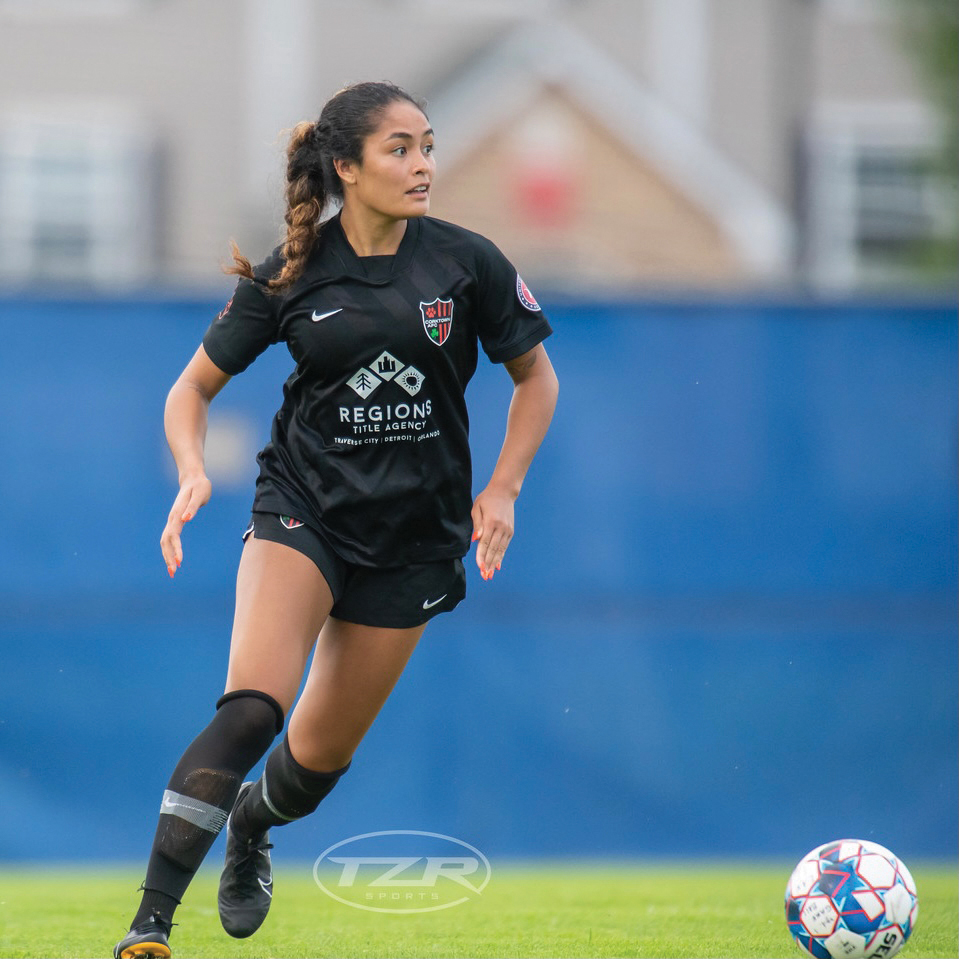 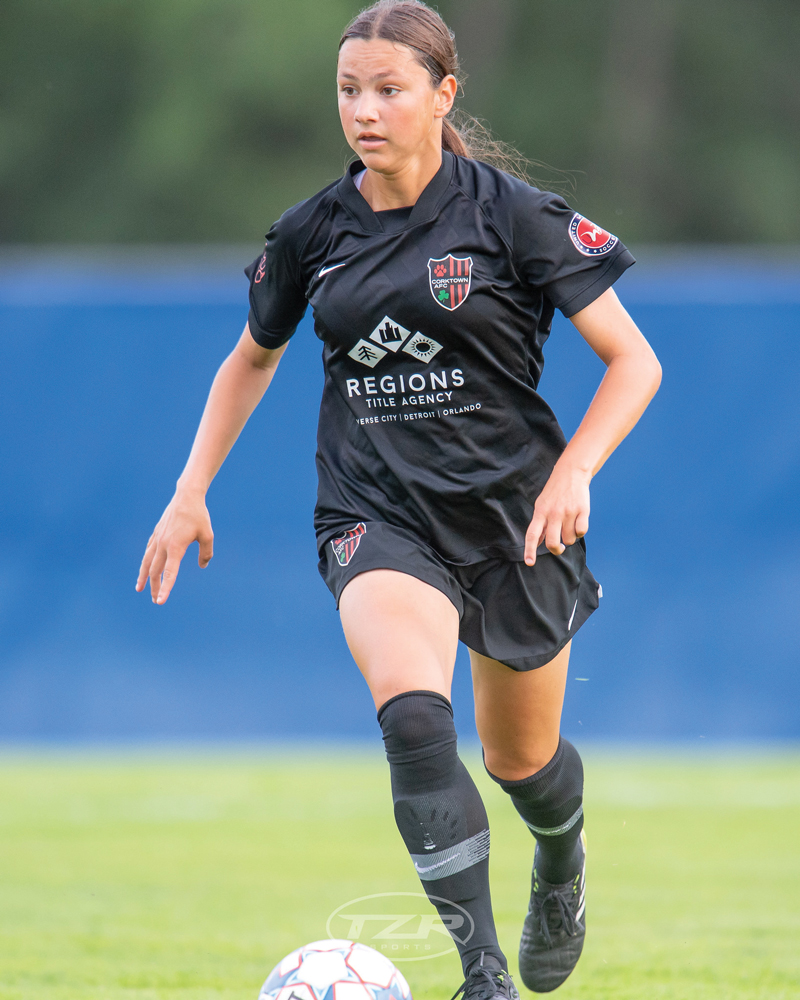 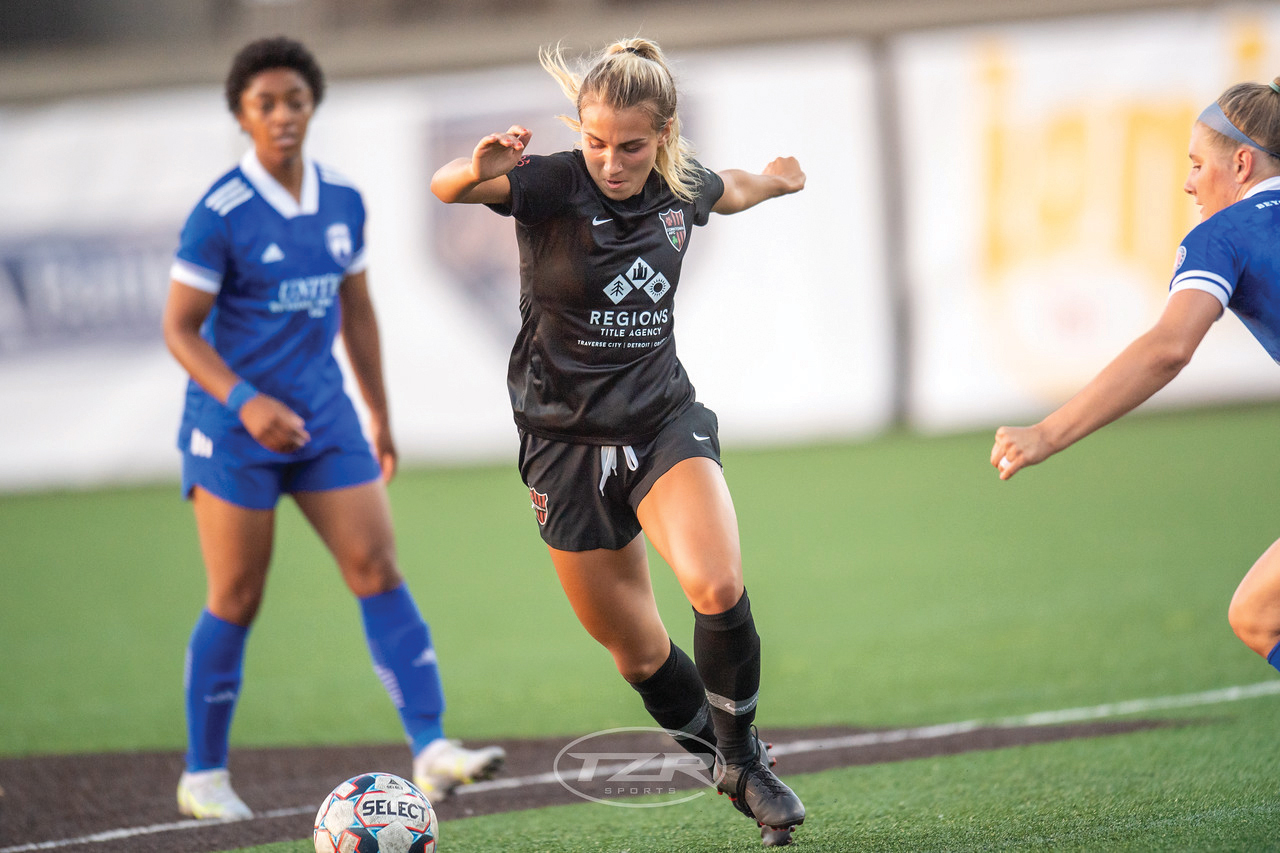 Outside back Zoe Hudson (Bowling Green), also a second-team UWS Midwest Division choice, will be with the team for the first part of the season before she joins The Philippines National Team.

Anchoring the defense will be returning goalkeeper Haley Craig (Stanford), a recent member of the under-age-19 national team. She has also been part of the national U17 and U15 squads.

Another goalie is Emma Martin (Butler), a Big East All-Freshman Team member, who gave up a scant .73 goals per game last season while posting a 15-4-1 record with nine shutouts, 15th in the nation, and an .805 saves percentage.

Midfielder Sami Lopez (Oakland) is a two-time Horizon League first-team pick and made the All-Region third team last season when she topped the league in points (19) and points per game (1.73), tied for first in goals (seven) and was second in assists (five).

Forward Alexa Sabbagh, Lopez’s college teammate, was a UWS 2 first-team pick last season and is a two-time, Horizon League second-teamer. She also became the first Oakland player to score three goals in a game since 2016. 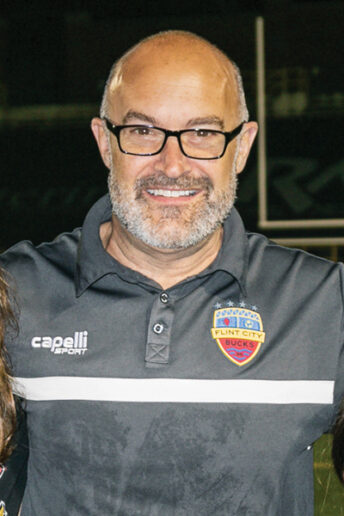 “Fans will have an opportunity to see the future National Women’s Soccer League stars and matches will be family friendly and affordable.”

Outside back Abby Werthman (Madonna University) was a first-team Wolverine-Hoosier Conference pick last season, finishing with 12 goals and four assists.

Among the new faces is center back Caitlin O’Malley (Butler), an All-Big East Freshman team pick in 2020 and a major reason the Bulldogs’ have allowed only .85 goals per game the past two seasons.

Hudson and the Bucks began discussing a partnership last fall when the USL announced it was forming a women’s league. 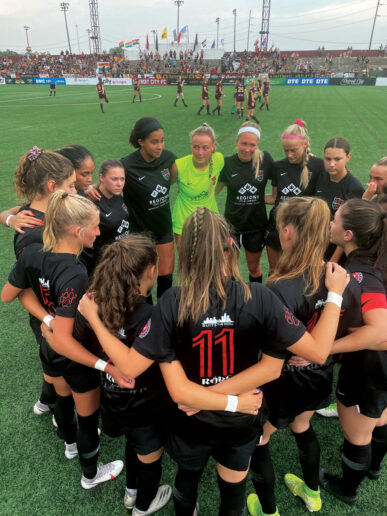 “Part of our mission and ethos is to play the absolute best competition in the region,” Hudson says. “We feel the (USL) offers the best competition currently. After some conversations with (Bucks President) Costa Papista, we made the transition and have been welcomed with open arms.”

Papista, who has overseen bringing the Ontario Hockey League’s Flint Firebirds and the Bucks to Flint, is elated to welcome another team to the city.

“We are excited to partner with Eddie Hudson to bring this elite-level soccer franchise to the area,” he says. “Like our men’s side, the women will represent some of the top pre-professional players in North America. Fans will have an opportunity to see the future National Women’s Soccer League stars and matches will be family friendly and affordable. We can’t wait to kick off.” ®