Everyone in attendance was responding in their own way to the rollicking music filling Downtown Flint’s Totem Books being performed by a gifted quartet fronted by area native and renowned boogie-woogie-style pianist, Mark Braun.

Among those standing, a tall, lanky man with long gray hair wearing his cap backward shuffled through some dance moves while grasping a bottled beverage. Another man, also with a beverage in hand, moved to the music while pointing to the band. Others on their feet recorded the sounds on cell phones while nodding with enthusiasm.

Most seated audience members joyfully moved their heads and feet to the beats as Braun, fellow pianist Luca Filastro, drummer Phil Siers and organist Carnez Wright ripped through one of their high-energy, blues and jazz-infused instrumentals.

The April 24 performance was part of an annual series of shows entitled “Blues & Piano Boogie Celebration” organized by Braun at quaint venues in Metro Detroit in addition to Totem Books. The event is celebrating its 25th anniversary this year and culminated in a signature show at The Ark in Ann Arbor.

While Braun has spent more than four decades performing around the world, sharing stages and recording studios with Grammy-nominated blues and jazz greats and releasing albums, intimate gigs like the one in his hometown are what really keeps the 65-year-old, National Boogie Woogie Piano Hall of Famer going.

“Nearly my whole life has been about music and I’ve discovered over the years that performing for people in small-scale settings, not arenas or stadiums, is where it’s at for me,” says Braun, also known in entertainment circles as “Mr. B.” “Being close to the audience softens that barrier between you and them. You can really feed off their energy which is exactly what happened at Totem Books. Everyone there gave us a fantastic reception.”

Another thing that enriches Braun’s musical soul is the purity and simplicity of performing outdoors for tips as crowds gather, something he does regularly throughout warmer months at the corner of Detroit and Catherine Streets across from Detroit Street Filling Station in Ann Arbor, his home base for the past 45 years.

The unique contraption has three tires and can seat three cyclists – one in the front, two in the rear – as they pedal the piano to its next show. The front rider can also power the bike solo, which Braun has frequently done.

Braun, however, was without the bike on May 11 during his debut performance on a new piano gifted to him by National Public Radio station WEMU in Ypsilanti. He has made regular appearances on national NPR programs like “Mountain Stage,” “All Things Considered” and “Here & Now.”

“Playing outdoors, especially in a place like Ann Arbor which has always provided a great atmosphere for live music, is something I’ve always loved, but it also helped me make up for some touring dates lost during the pandemic,” Braun says. “It’s another great way to connect closely with the audience and it’s been a hit at one of the best corner spots in town with large crowds coming out on some nights. I love doing the street musician thing.”

“Mark and I have enjoyed performing with each other all over Michigan in a variety of concert settings for more than 30 years,” Keller says. “We love sharing musical ideas and trying to make beautiful and amazing music out of nothing – starting with silence and filling a room with joy. Mr. B is an especially gifted pianist and composer and his bread and butter has always been his unique and artistic take on piano blues and boogie-woogie.”

Braun was drawn to that style of music, which spread from the deep south during the 1920s and 1930s, soon after discovering a love for playing piano in his early teens. That passion originated from his family winning an organ in a raffle (before trading it in for an upright piano and color television).

“Like many of my peers, I was listening to blues-based rock albums from bands like Led Zeppelin and the Allman Brothers; but then, I began discovering more of the original music those songs came from by blues artists like Sonny Boy Williamson and Muddy Waters,” Braun recalls. “I went nuts for that kind of music, got really deep into it.”

The teenage Braun was also influenced by a Jimmy Yancey record his father gave him. The pioneering boogie-woogie pianist was a member of the Rock & Roll Hall of Fame’s first class.

After graduating from Flint Southwestern High School in 1975, Braun began attending the University of Michigan. He found Ann Arbor’s thriving music scene and venues like The Blind Pig a perfect place to grow his budding music career which by then was expanding into jazz, influenced by the likes of legendary jazz artists like Duke Ellington and Horace Silver. Braun continues to play The Blind Pig, The Ark and Kerrytown Concert House to this day.

After three years, he left school to devote his full attention to music and was not shy about seeking the mentorship of famous, still-living musicians linked to the golden age of blues and jazz.

“I was fortunate to come of age in the music business just in time when a fair number of guys with ties to the first generation of that music were still around,” Braun says. “I traveled around the country, hoping to find and learn all I could from them.”

For the most part, the legends obliged. 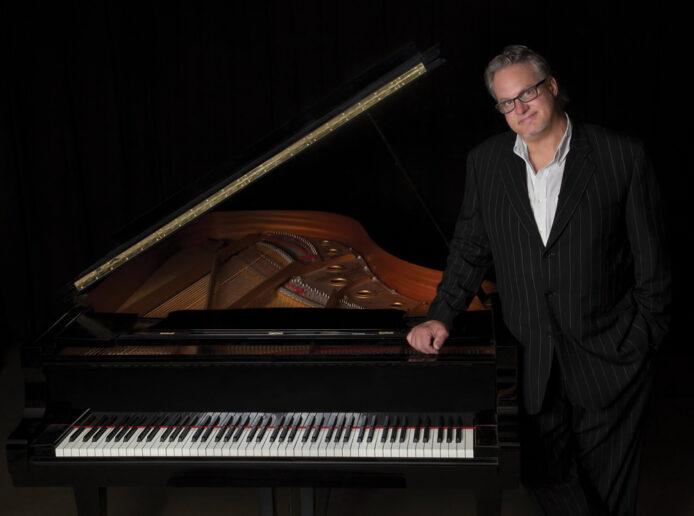 “They could see how sincere and eager I was to learn from them, which made a difference,” Braun shares. “Obviously, we were completely different when it came to age, social background, talent-level and life experiences which made staying with them and soaking up all I could invaluable. I learned to do what I do today because of them.”

“Partners in Time,” one of the works he’s most proud of, was recorded four years later with jazz legends JC Heard (drummer) and Marcus Belgrave (trumpet player). Heard recorded or performed with countless blues and jazz giants, including Ray Charles, Duke Ellington, Benny Goodman and Billie Holiday while Belgrave recorded with Charles, Tony Bennett and great Motown artists like The Temptations and Four Tops.

“One of my most profoundly cool experiences was working with JC Heard – what a legendary Detroit drummer,” Braun says. “I learned plenty from him and us playing together was special. Working with the likes of John Hammond and Duke Robillard were very rewarding, unforgettable experiences as well.”

“The changes in direction serve to literally amaze the listener, taking them through a range of moods and colors that are generally not experienced in such a setting … This is not just a case of a local boy making good, this is a statement of a world class musician playing for his hometown fans,” a review in Detroit Metro Times read. 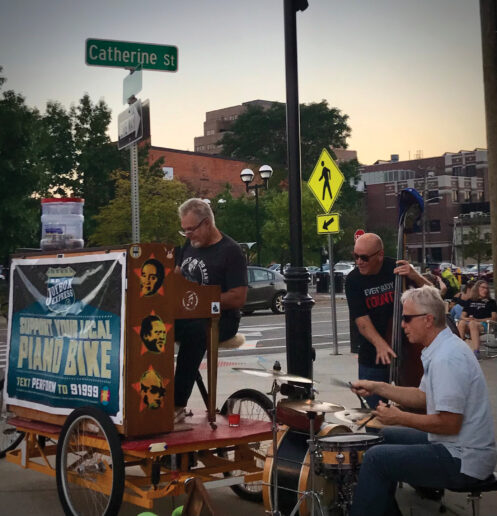 Construction of Braun’s Joybox Express piano bike coincided with a charity he founded in 2009 to raise funds for Flint-area athletic and artistic youth programs by riding the bike to various locations and playing concerts along the way. In 2017, Braun and his entourage pedaled it all the way from Flint to Mackinaw City to benefit YouthQuest – a high-quality, no-cost Genesee County after-school enrichment program. The journey culminated with Braun’s performance at Mackinac Island’s Grand Hotel.

That trip followed an even more ambitious one two years earlier, a 2,000-mile, 90-day journey following the entire length of the Mississippi River.

“I have always taken part in sports as well as being an artist, so starting a charity to help children involved in both in my hometown seemed like the natural thing to do,” Braun says. “I also felt it was a way for kids to see they can pursue athletic and artistic excellence at the same time. No reason to choose.”

Braun has simultaneously pursued excellence in furniture building and music which has served him well ever since the pandemic began curtailing his touring schedule. It has still not returned to pre-pandemic levels.

“It became important to increase my income from furniture building when the gigs started drying up and I’ve been pleasantly surprised by the response,” he says.

Braun also began a series of Facebook Live webcasts entitled “Live from the B Hive” from his living room eight days after Michigan’s first coronavirus case was reported. Some viewers left tips via PayPal.

Paul Keller expects Braun’s musical growth to continue, even after decades on stage.

“Mr. B is always searching for the next great song to learn and actively working on his next awesome original composition,” he says. “Mark’s original music resonates with people because his songs have a bluesy earthiness that everyone can relate to. They also contain interesting compositional ideas beyond the blues that keep listeners and performers engaged and excited.”

The remainder of 2022 will be busy for Braun, who married wife Wendy in the winter wonderland of Porcupine Mountains State Park in January. He will continue performing before having both of his knees replaced and intends to recover in time to play a series of long-postponed concerts in the western U.S. this fall. Next year, he hopes to finally perform in Europe again.