After spending the last 20 years working tirelessly as Bishop Airport’s Chief of Public Safety, Chief Christopher Miller was ready for retirement. It was time to relax and enjoy life. “I had worked professionally non-stop for almost 39 years,” he says. “I was ready to slow down, do some traveling with my wife, Kimberly.” When Mayor Sheldon Neeley gave him a call out of the blue, he didn’t know what to expect. “He congratulated me on my retirement and told me that the city would be holding a Martin Luther King Day celebration honoring five people with the City of Flint Lifetime Achievement Award and a key to the city,” Miller recalls. “When he told me that I would be one of them, I was humbled. I had no idea. He told me that it was the highest award a citizen can be given and I am deeply honored to receive it.” At the ceremony, Miller spoke about his life in law enforcement and the people who got him there. “I didn’t do this all by myself. A lot of people helped get me to this point and I owe a lot to them,” he says. “It started with God, my mother and my father. They instilled good moral values and taught me how to communicate with and respect others the right way. Those lessons kept me out of trouble growing up.”

“I didn’t do this all by myself. A lot of people helped get me to this point and I owe a lot to them.” 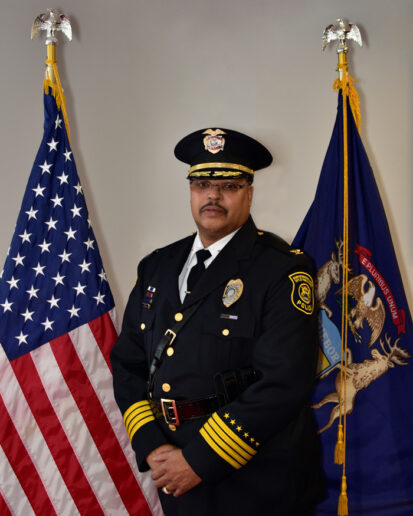 As a young man, Miller never dreamed of becoming a police officer. “I didn’t ever think of it,” he said. “I was a musician who played bass guitar and sang at gigs all over town, even opening for large recording acts. It wasn’t until I met a police officer working security at one of those shows that I even considered law enforcement. Honestly, at first, I thought he was nuts.” That officer continued to work security at a number of Miller’s shows and eventually offered him a job. When his music career began to slow down, Miller decided to accept that offer.

“I started working security and decided that joining the police wasn’t a bad idea. I applied to the State Police and also with Flint,” he says. “Flint immediately went through layoffs and the State Police wanted me to relocate. I love Flint and it’s where I wanted to be, so I had to turn them down.” Next, his officer friend suggested he apply at the Genesee County Sheriff’s office. They accepted and in 1982, Miller began his career. In 1986, he joined the Mt. Morris Police Department on a part-time basis while continuing to work with the sheriff. Then, in 1989, Miller left Mt. Morris for a position at the newly-formed Flint Bishop Airport Department of Public Safety, and worked there part-time for ten years. In 1999, the chief at Bishop retired, opening that position. “I walked in for my shift and one of the senior officers pulled me aside, encouraging me to apply for the job. He knew I wanted to be full-time at the airport and told me that this was my chance,” Miller explains. “I thought about it all night. When I got home, I told my wife and she loved the idea. I met all the requirements, so I applied and was chosen out of almost 30 candidates. The airport director took me to breakfast and offered me the job.” Miller retired from the sheriff’s department and a weekend later, was in his new office at Bishop.

Just as he was settling in, the world was shocked by the tragedy of 9-11. The airport and its security procedures changed overnight. “It changed the way we operated 100 percent,” Miller states. “The federal government had us shut everything down. We instituted new protocols and heightened scrutiny on everything. For weeks afterward, we had the National Guard, state and local police at Bishop. The response from the state and local departments was awesome. To this day, the airport is not as it used to be and it never will be again.”

June 2017, Miller dealt with his own terror situation when one of his staff was attacked. It was a day Miller will never forget. As he spoke with his fire lieutenant in the Bishop lobby, they heard a scream. Officer Jeff Neville had been stabbed in the neck by a Tunisian assailant, Amor Ftouhi. Along with two other officers, Miller and Fire Lieutenant Dan Owen jumped into the fray. “We were able to disarm him, get him on the ground and handcuff him. He fought like a wild animal the whole time. EMS was there quickly to save Neville’s life,” he recalls. “There was so much blood all over me. I remember looking down at my hands and they were covered. I immediately locked down the airport to make sure the assailant didn’t have anything else planned or any accomplices.” Officer Neville survived the ordeal, but doctors told Miller that Neville had been very lucky. According to the FBI, Ftouhi was looking to purchase an assault rifle before the attack. “If he had that with him, I wouldn’t be here today,” Miller says. “We plan extensively for this kind of incident. We collaborate with the local hospitals, police departments, transportation and others. On that day, everyone did their job.”

For the most part, however, Chief Miller will tell you that his job at Bishop Airport was amazing. He saw and did some incredible things, including meeting multiple presidents, vice presidents and working with many members of the Secret Service. Perhaps his favorite highlight was his tour of Air Force One. “It was awesome,” he recalls. “I got to see everything. The pilot gave us a tour of all three floors and even let me sit in the cockpit. I’m pretty sure that I am the only person in Flint who has done that. I remember waving from the cockpit to my co-workers in the terminal and seeing their shocked faces.”

As for retirement, Miller is ready to drive his Corvette and travel. He is a co-founder of the Corvette Reunion that takes place during Back to the Bricks when nearly 600 Corvettes are driven into town from locations across the United States. He hopes to visit with friends in other states and to see Italy, France and Great Britain. “We have friends in Germany who have always asked us to visit,” he says. “Now that my wife and I are both retired, we have time for something like that. My bucket list is full, believe me.”

On his last day as Chief of Public Safety, Miller went up into the traffic control tower to get a good look at the airfield one last time. He visited each and every building as he said his goodbyes. “My goal was to leave the department in better shape than I found it and I believe I did that,” he smiles. “My job was to make sure that everything was ready and that everyone had whatever they needed to be effective when the time came. For years, my cellphone has been a ball and chain and I always had to be ready to get on my horse at a moment’s notice. Now, I can exhale and relax.”