The last eight months have been a whirlwind for Bishop International Airport’s new Director, Nino Sapone. He was hired last March as the deputy director of operations and maintenance, and four months later found himself the interim airport director. On October 22, he was officially named director of BIA. My City Magazine sat down with him to learn a little about his background and plans for the future of Bishop. 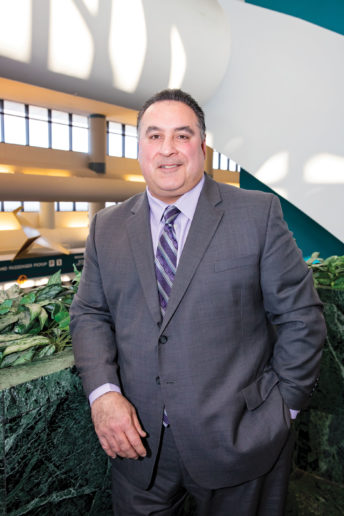 “I’m originally from Pittsburgh,” starts Sapone as he begins to share his story. “Flint is a lot like Pittsburgh – they are both blue-collar towns that suffered greatly when they lost their industry. The steel mills took a hit in Pittsburgh, but the city has reinvented itself, becoming more tech- and medical-oriented. Flint took a hit when GM left and is now reinventing itself. I want to be a part of that.”

Sapone didn’t start out with his eyes on the sky; instead, he had classroom aspirations. In 1993, he graduated from the California University of Pennsylvania with a teaching degree. “My second love was always aviation,” he states. “I subbed and taught classes for a little while, but at the time, the market was extremely saturated. Pittsburgh International Airport had just opened and I got a job and worked there for 26 years in operations and public safety.” Sapone worked his way up to vice president of airport operations and last year, decided he wanted a new challenge in a smaller market. Flint’s Bishop International Airport fit the bill.

When Sapone first arrived in Flint, he was quick to notice two things that made BIA unique. The first was the unerring dedication of the Flint community and airport staff to the airport, and the second was the amount of opportunity the airport held for growth. “What I have seen both in our airport personnel and the community is the passion they have for this region and for their airport,” he shares. “Coming from outside the city, I heard all the negative stories and wasn’t sure what to expect. I immediately saw the potential of Flint. It’s really building itself back up and I was impressed.” The airport itself, however, offered nearly unlimited potential to Sapone. “Bishop has so much opportunity. It’s location alone is phenomenal and it has such a great transportation network around it,” he states. “I just felt that Bishop should be bustling and we are working hard here to make it so.”

“Things are starting to fall into place. People are really paying attention to Bishop. It’s an absolute jewel.”

Sapone has hit the ground running. His team has added new non-stop flights to Sarasota and Charlotte, NC and are working to open up flights to Las Vegas. In order to increase business traffic through the airport, plans are in the works to potentially offer flights to Washington D.C., Dallas and New York. The recently-added Charlotte flight is something that the airport is very proud of. Charlotte is the country’s seventh-busiest airport hub, and being able to offer a direct flight to Charlotte will open the door for travelers to head to the Caribbean and overseas. “If we can get good connections like Charlotte, it’s just as good as a non-stop, because of all the possible opportunities,” Sapone explains. “It puts us into a global network.” Making connections to large hubs is very important if BIA is going to continue to compete with large airports like Detroit Metro. The BIA has great plans but there is much more work to be done. 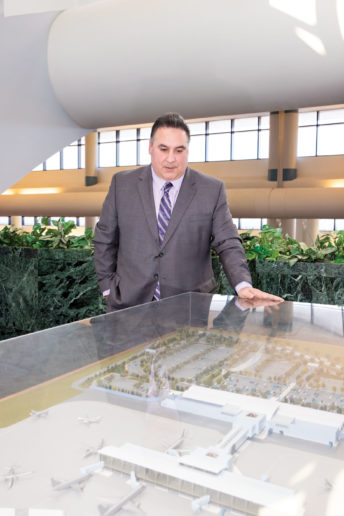 Nino Sapone is focused on maximizing the potential of Bishop international airport.

Adding flights and offering more destinations is only one part of the plan, however. Sapone sees more than aeronautical opportunity. “On the business side, I am looking at cargo. I want to utilize the transportation network we have all around us,” he says. “We have hangars that are available and we are reconditioning them. We have land we want to get ready for use. We want to kickstart some development in the area around the airport. If we can get some industry and some business here, we can really take off. We want to utilize all our assets, including our community.” Sapone would also like to partner with the community businesses, schools and stakeholders and has already started with businesses like Wings and Wheels. He has recently begun a partnership with Genesee Intermediate School District and the flight training school, Crosswinds. “We had 30 kids sign up the first semester and it was surprising,” states Sapone. “The enthusiasm for aviation is there.”

BIA is beginning to make a push to capture more travelers from other markets and are going to offer travel package incentives that will include reserve discounted parking rates. Plans include upgrading parking lot automation and installing chargers for electric vehicles. They are even shrinking their carbon footprint by changing to LED lights. The push to capture more travelers is ongoing, and will remain a priority.

Nino Sapone is already seeing some results from his team’s efforts. Flight travel is already up for the first quarter of next year and as things continue to progress, he is confident that he will see more. “Things are starting to fall into place. People are really paying attention to Bishop. It’s an absolute jewel,” he says. “All of the feedback we get tells us that we are user-friendly, we have a nice, relaxed climate and easy access. We take a lot of pride in that.”