The strength and grace that comes from generations of oppression is manifested in local women who love their community. In the Flint Institute of Arts’ latest exhibition, Women of a New Tribe, photographed by Jerry Taliaferro, display the essence of black women in one black and white photograph; a photo intended to capture each one’s physical and spiritual beauty.

Largely self-taught, Taliaferro became interested in photography during his time in the U.S. Army. As he built his portfolio, he experimented with models and lighting; this, and noticing that black women weren’t typically photographed in this way, eventually led him to begin this project over 20 years ago. Taliaferro currently lives in Charlotte, NC with his wife, Debra. 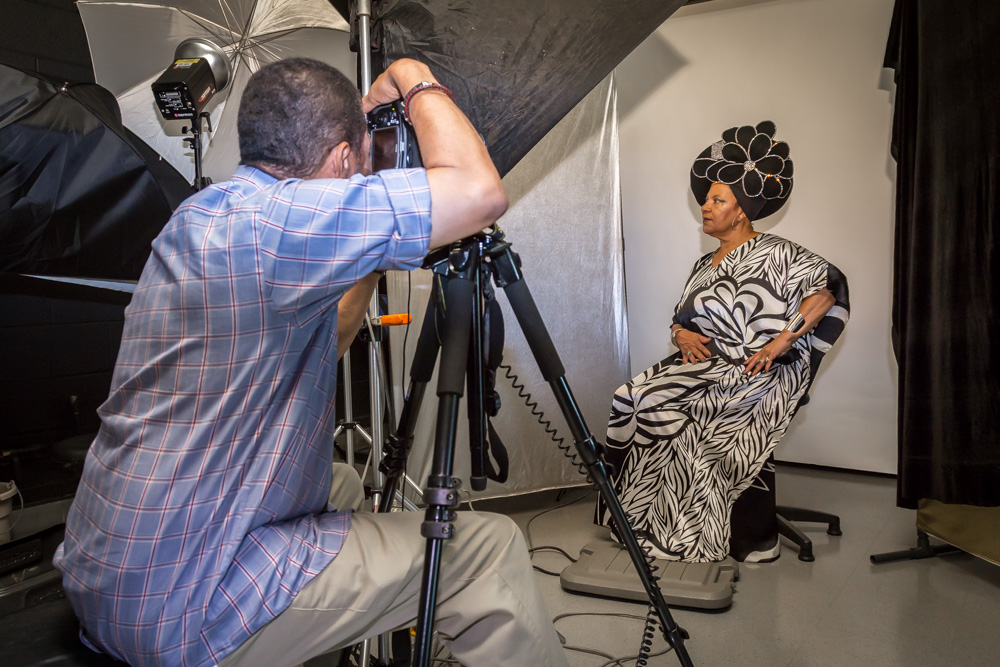 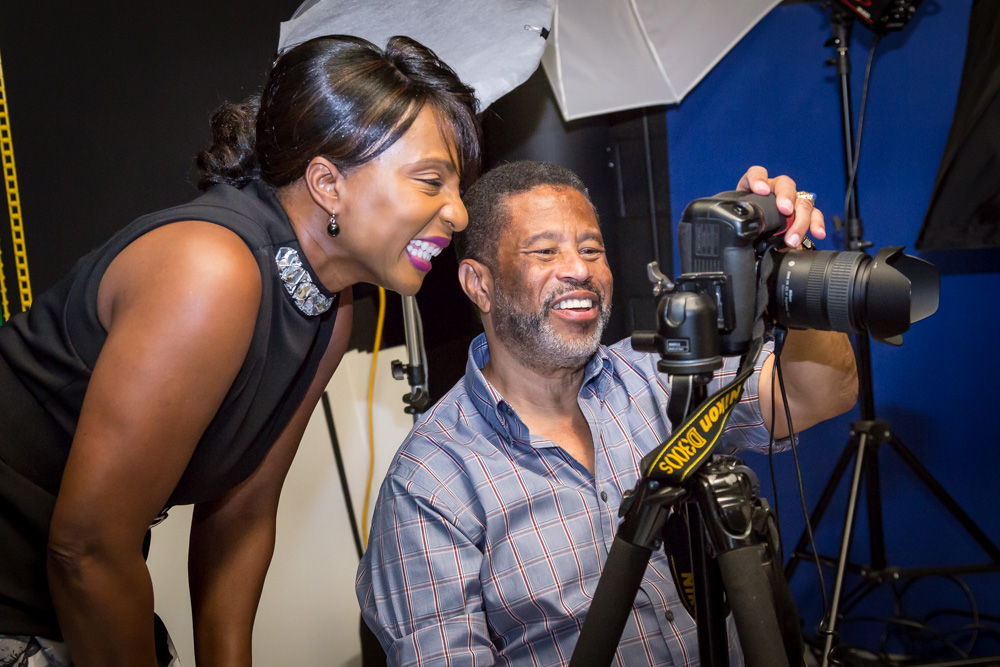 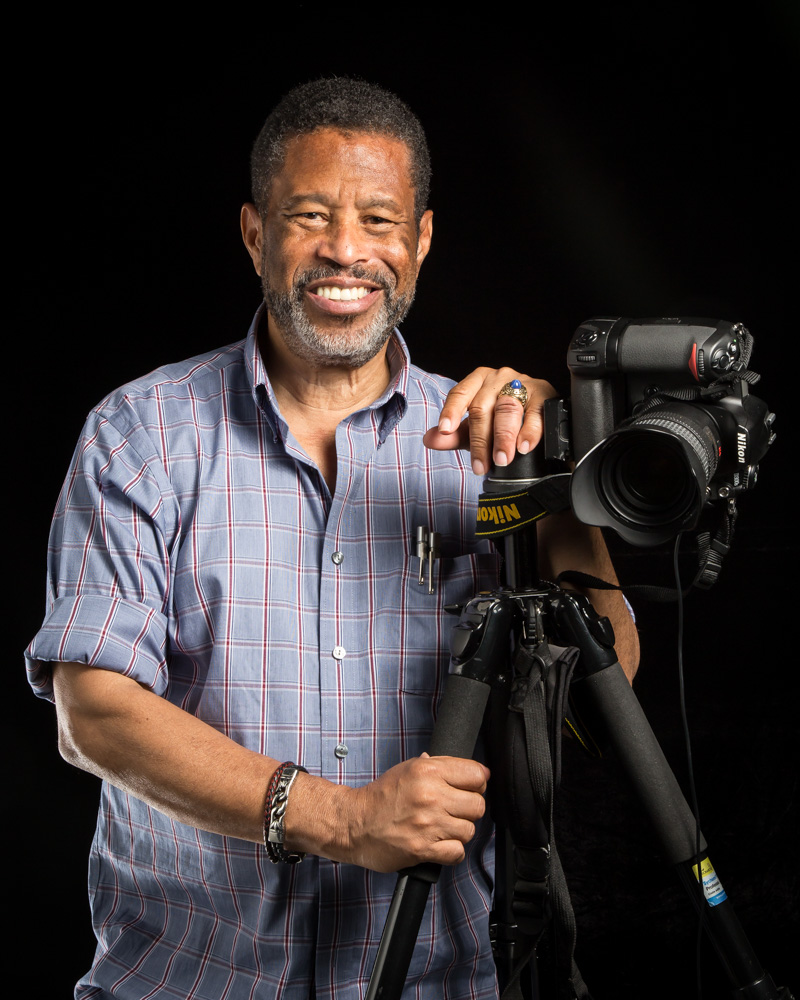 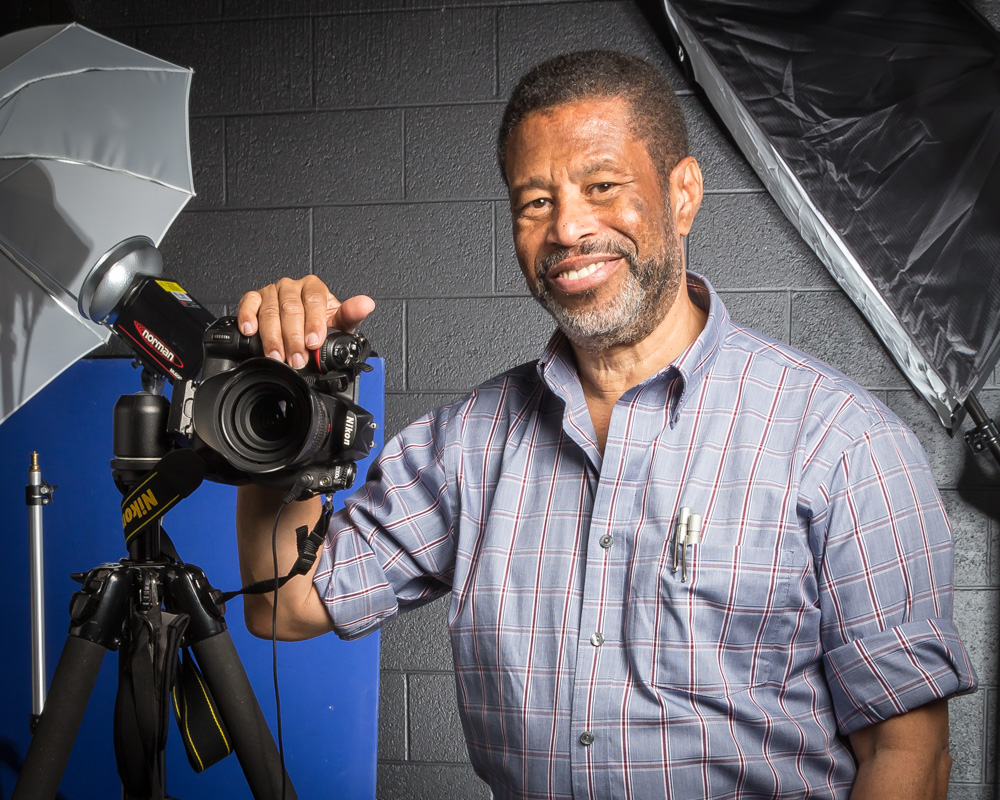 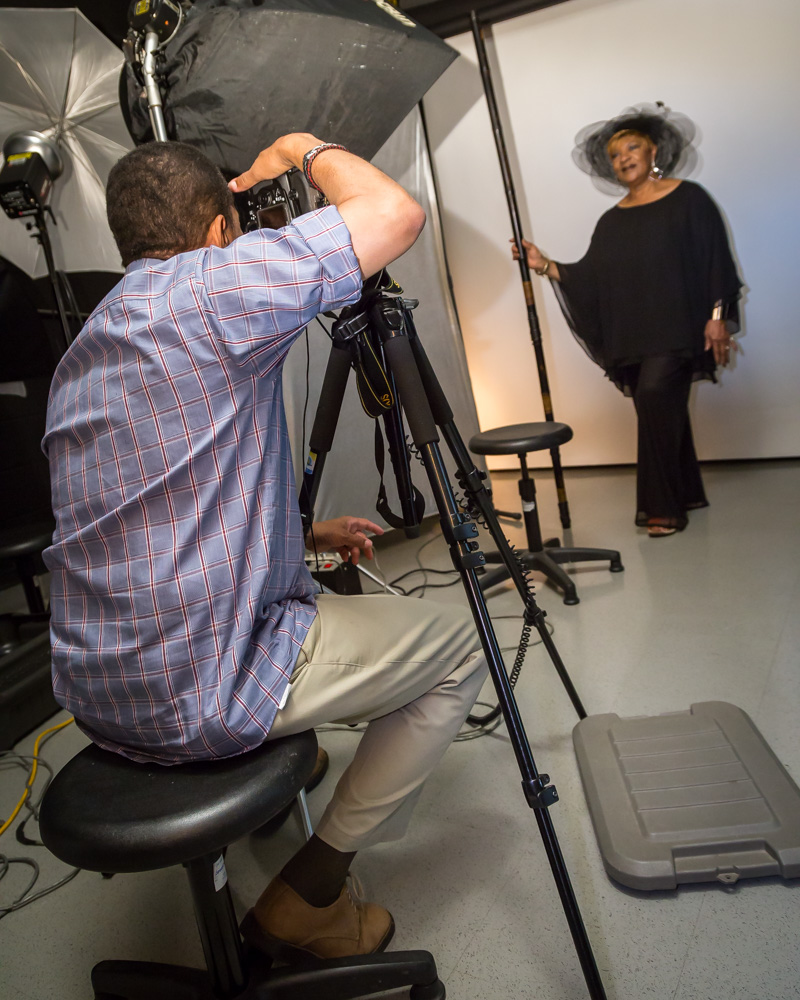 “Some people’s definition of a beautiful woman was a little more constrained,” Taliaferro explains. “Women of a New Tribe pushes against that. Beauty can take many forms. You are kind of cheating yourself if you’re not looking for the beauty in all women, versus trying to find those who meet a very narrow definition.”

The exhibition is part of a larger project that has traveled across the U.S. for 20 years. Inspired by old Hollywood glitz, Taliaferro uses dramatic lighting and poses to show that black is not only beautiful – it’s glamorous.

“I was always fascinated by the photography of early Hollywood and photographers who did portraits for the major studios,” Taliaferro says. “I studied their style, their lighting, and I liked the effect. Black women weren’t often photographed like that; with dramatic, more meticulous lighting. Everybody’s face is different. I have to be conscious of how the light strikes facial features.”

Taliaferro enjoys explaining his process to his subjects, wanting the women to be comfortable and part of the collaboration. In addition, the FIA curators used a nomination process that involved the community. “That gives the community ownership of the exhibition,” explains Taliaferro. “It’s their women.”

Flint citizens nominated 110 community women; 50 were chosen and 49 were photographed for this local project. Here are a few of the subjects featured. 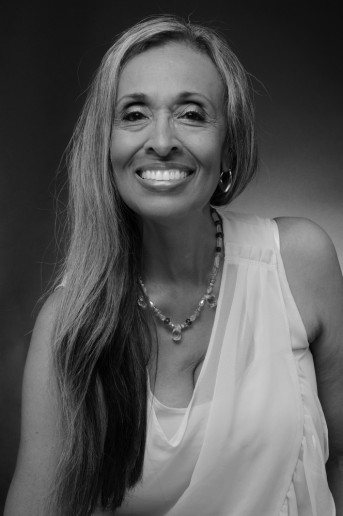 Originally from Chicago, Dr. Sharon Simeon moved to Flint in the late 1980s. She received her doctorate in education from Wayne State University, and taught general and special education at Flint Community Schools. As a teacher, Dr. Simeon worked with students who had learning disabilities and emotional impairment. She has also worked as a teacher consultant, helping teachers develop lesson plans to fit the needs of students with disabilities.

Having retired in 2012, Dr. Simeon is anything but idle, working part-time at Powers Catholic High School and volunteering with the Red Cross as at team lead. In that role, she works with people who have experienced disasters, like fires, and she educates students about fire prevention and tornado safety. She volunteers with VSA (formerly known as Very Special Arts) helping individuals with disabilities through the arts, and participates in external reviews with a group called AdvancED, which helps schools get accreditation. Dr. Simeon and her husband are on the FIA’s School Committee, and she is on the FIA Founders Board. “We’re trying to give back to our community as much we can,” she adds.

Dr. Simeon’s friend, Billie Fisher, nominated her for the Women of a New Tribe project. “It was so sweet,” she shares. “I was very surprised.”

“It was fun, very relaxed,” she says of her experience working with Taliaferro. “He made me feel at home, as if I’d known him for years. He was very open and shared his knowledge. It was a wonderful experience. He made me feel like a movie star!”

Dr. Simeon is optimistic about the group with whom she was photographed. “Many women have contributed so much to making our community successful,” she says. “They haven’t let the passion – that has always been in Flint – die. It’s because of their strength and vision, the hard work that is still here, that Flint is making a comeback.” 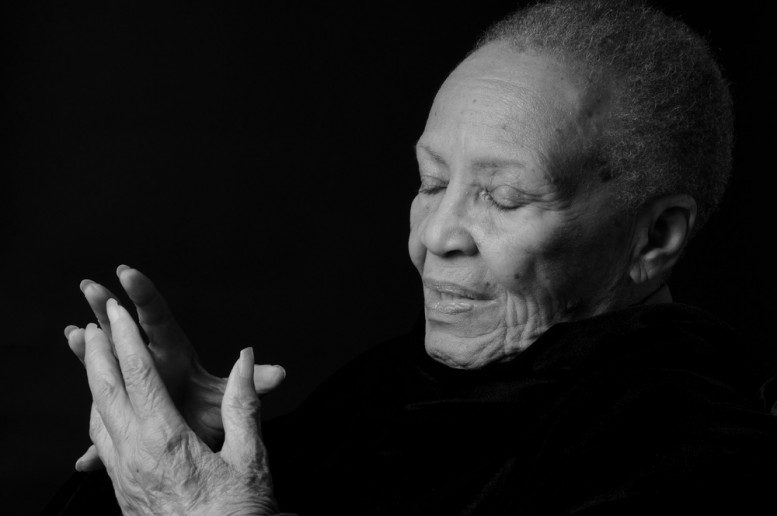 A West Virginia native, Edith came to Flint after she married in Atlanta, GA. She and her husband owned a funeral home from 1955 until 1989, and they were part-owners of a restaurant on Grand Blanc Rd. Edith earned a bachelor’s degree at Shaw University in North Carolina, then earned her library science degree from Atlanta University School of Library Service in 1947. She was initiated into the Alpha Kappa Alpha sorority (the first sorority for black college women).

In 1951, Edith began working at the Flint Public Library as a cataloger, retiring in October of 1987. She earned her mortuary credentials in 1962 at Wayne State University. Shortly after coming to Flint, she became involved with the Urban League, the original Planned Parenthood board, the Salvation Army board for 38 years, Friends of Film Museum, the NAACP (of which she is a life member) and its Youth Group. To celebrate her 90th birthday last November, she established a scholarship fund for the Community Foundation of Greater Flint.

For her many achievements and involvements, Edith has received many awards: from her sorority, the Larry Thompson Award, and an award from the Jewish Federation. She was inducted into the Genesee Regional Women’s Hall of Fame, and she and her husband were donors for the Cultural Center, having attended all of the openings of the buildings.

“I was pleased that someone felt that I was worth recognizing,” she says. “I was impressed by [Taliaferro’s] technique and vision. It was a very interesting experience.”

Having dedicated her life to improving the circumstance of African Americans, Edith is proud to be part of an artistic project that shares her goals and values. “Any kind of exposure for black people is important, because prejudice is still a vital part of our society,” she states. “The matter of color is very ingrained in our society. Race is a big factor in my psyche. Anything that I can do to improve that circumstance, I feel compelled to do.” 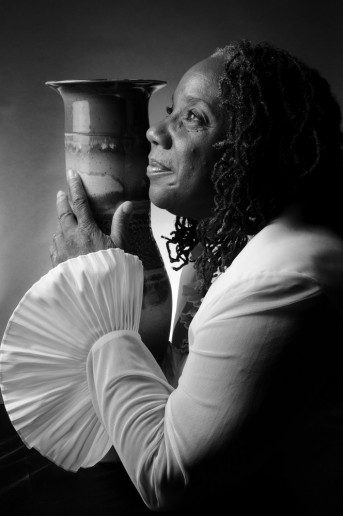 Valorie was born in Flint and attended Southwestern High School. A retired General Motors executive, she has spent 30 years with GM; 25 as a manger, 21 as a skilled trades manager, and in the last four years, she has been a quality manager. She received a Master’s of Science in Administration from Central Michigan University.

She was nominated for the project by FIA Director of Development, Kathryn Sharbaugh, who was her pottery instructor for ten years. “This was a great opportunity,” she says. “A lot of fun. Mr. Taliaferro was wonderful to work with. The process was very comfortable. He shared each shot with me during the process.”

Valerie has been doing pottery for 20 years; she is currently a featured artist in FIA’s Art Sales and Rental Gallery. In 2000, she began The Chosen Few Arts Council with her family. The non-profit teaches Fine Arts in underserved communities, with classes at Berston Field House and The Chosen Few Music Studio.

“I believe this exhibition is valuable because we have so many accomplished women in the community. Flint needs wins right now,” she shares. “These women should be celebrated.” 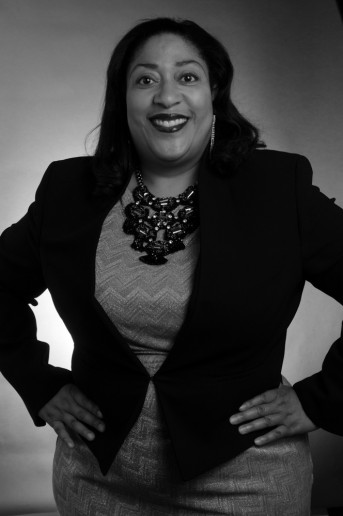 Erica Leverette-Traorè is Flint native and all-around business professional. She holds a Bachelor of Arts in Public Administration, a BBA in Human Resources, and an MBA in Management. She has experience with non-profit, business development and administrative healthcare, and has had various interesting opportunities to work in community programs with youth, seniors, mental health services, IT and healthcare. She actively supports volunteerism in her community, and believes in helping others.

“I felt humbly honored, elated and appreciative to be a part of the Women of a New Tribe exhibition,” Erica shares. She was nominated by her longtime friend, brother and classmate, Ulise Nedson, who believes that she loves people and works toward the best for the community, as well as individuals in need. Nedson shared with her that he feels she has done a lot for people; she fights against injustice and strives to share knowledge and enlighten others.

“It was absolutely awesome working with Mr. Taliaferro!” she says of her photo shoot. “He is so talented and gifted. He made me feel completely comfortable and beautiful, and he welcomed those who were with me to be part of the session.”

In resounding agreement, the women of this new tribe are happy for the exhibition’s timing and theme. Erica says: “With all of the negative publicity that has surrounded Flint over the last 20 years or so, including the water crisis, this exhibit gives us an opportunity, collectively, to celebrate women for their community efforts in and on behalf of the City of Flint and its residents; our work, our contributions, and our beauty.”

Women of a New Tribe opened on January 22, 2017 at the FIA’s Community Gala, and will continue through April 15. A catalog for the exhibition will be available for purchase at the FIA Museum Shop throughout the show’s run.

“The best part of Women of a New Tribe is that I meet the most impressive women,” shares Taliaferro. “I’ve heard the most incredible stories, and I am enriched by every installation.”