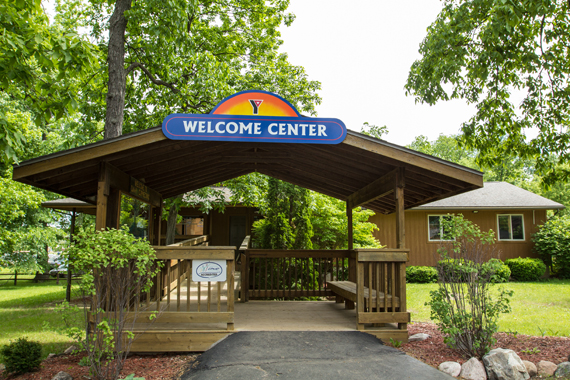 Since its founding in 1915, YMCA Camp Copneconic has created special memories for countless children and families including those with special health needs. On May 17, a groundbreaking ceremony was held for a new Health and Wellness Center currently under construction on the beautiful, 700-acre property in Fenton Township.

The new facility was made possible by a recent challenge grant of $250,000 from an anonymous organization. To date, $1.4 million has been raised to fund the project. John Carlson, Executive Director of Camp Copneconic, is excited about the opportunities represented by the new building, which is expected to be completed by the end of 2013. “With this addition, we will have arrived as one of the Midwest’s premier camps,” says John.

The main floor of the new 11,580-square-foot Health and Wellness Center will house two treatment areas. One area will be for overnight and day-campers, the other dedicated to examining and treating children and young adults with chronic and serious health issues. The facility’s lower level will provide housing for volunteer medical staff. There will also be a resting area for kids to take a break when they are not feeling well, as well as a pharmacy and a community room. The furnishings will feature warm-toned walls and ceiling tiles decorated with raccoon footprints. “It won’t feel like a hospital,” said John.

The $2 million Health and Wellness Center will especially enhance the camping experience for kids with serious illnesses and chronic diseases. Partnership camps are available at Copneconic for kids who have debilitating illnesses such as diabetes, Asthma, Crohn’s Disease, and cancer, to name a few. The Kids Living with Diabetes Camp, for example, is now the largest diabetic camp in the nation. The American Diabetes Association brings in the medical expertise and personnel, and Camp Copneconic provides the fun, food, lodging, and counselors. “The whole idea is for the kids to just be kids, and have a chance to embrace life even though they’ve been thrown a curve ball,” said John.

Bernie Riker, Director of Fund Development, is thrilled about the new Center. “It’s quite the facility!” he exclaimed. He’s even more enthusiastic about the partnership camps that have been created with various groups such as the National Kidney Foundation and the Crohn’s & Colitis Foundation. Bernie says he has a passion for working with kids who are ill. “Camp is a wonderful experience for them, and can be life-changing,” he said. “Children get to spend time with others who have the same disease that they have and say, ‘Hey, I’m not the only one.’ Lifelong friendships are formed,” he said. The most recent partnership camp is for kids with autism. John said the idea for this program came about through parent suggestions. The Autism Support & Resource Center got involved and Camp Copneconic now partners with the Center in serving 60 kids on the autism spectrum.

Jeff Cram of Flint Township is the current director of Camp Quality USA – Children Living with Cancer. The group holds a partnership camp at Camp Copneconic in July. A few years ago, Jeff and his wife Traci lost their 11-year-old daughter, Peyton, to Ewing’s Sarcoma. “Radiation, chemo, we just couldn’t get rid of it,” Jeff said through tears. He said it broke his heart when he had to tell his daughter there was nothing more the doctors could do. “But, I’m still going to camp, right?” was Peyton’s reply. “Camp means so much to these kids,” Jeff said. “It gives them a goal to shoot for. It is a great time for them, a time to just be normal.” Jeff now puts all of his effort into providing a quality camping experience for other children who have cancer. He is joined in this endeavor by his father, two uncles, and his niece.

Jeff is very excited about the new Health and Wellness Center at Camp Copneconic. “I can’t wait until it’s done,” he smiled, admitting that he is just a little disappointed that it won’t be completed in time for their camp stay this year. It is his understanding that the new facility will have quiet rooms where the kids can rest when overcome by the heat or the effects of chemotherapy or other treatments they are receiving; about 60 percent of the kids at the camp are in some sort of active treatment for their illnesses, he added.

Camp is held year round at Camp Copneconic. School groups from all over Southeastern Michigan participate in outdoor and environmental education programs from September through June. Groups such as Boy Scouts, Girl Scouts and church organizations host camps on weekends. “We want the kids to feel safe and secure,” John says. “The new Health and Wellness Center will help us accomplish that goal.”

Are you interested in purchasing photos from this story? Go HERE and select the “Camp Copneconic” category.

Share. Twitter Facebook Google+ Pinterest LinkedIn Tumblr Email
Previous ArticleSo You Say That There’s Nothing To Do In Flint?
Next Article Fun on the Fairway My City Takes Trophy at Flint & Genesee Chamber of Commerce Golf Classic