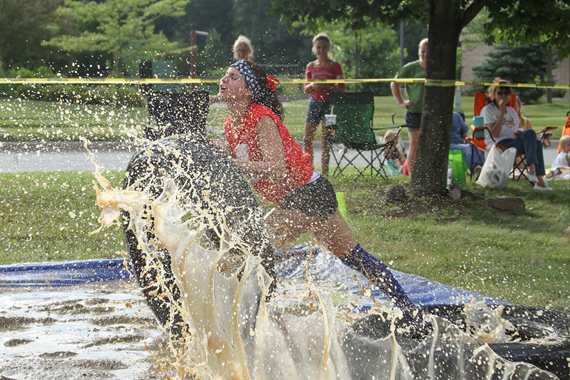 On July 4, the Freedom Center of Fenton celebrated its 19th annual Independence Day festivities at Silver Parkway with inflatables, food, music and activities for the whole family.

The Freedom Center has gained a reputation for serving the community over the years. The church holds several food, clothing and gift drives each year, and the Fourth of July event is known as one of its largest community outreaches. The church faithfully marches in the Fenton Fourth of July parade by day, with ensuing activities at a designated spot that evening.

Each year, the staff and members of the Freedom Center try to include new activities and consider different causes to assist. This year’s agenda featured what was called a “Hero Dash” obstacle course, which placed participants in a race with walls and fences to scale and monster truck-sized tires to flip through mud. Participants paid $5 to run the course, and all the proceeds went to the Fenton Fire Department. Cooperative sunny weather and the occupation of a field of green space on Silver Parkway made for a great venue not only for the Hero Dash, food, and inflatables, but also for viewing the Fenton City fireworks, which close out every Fourth of July celebration.

Fenton native Terence Wilkerson has long attended the Freedom Center’s Fourth of July events. He would go on to serve at the Freedom Center before assisting a pastor in Lansing. Not being intimately involved with the most recent event gave Wilkerson a new perspective on the impact that it has on the community. “I’ve been to many July fourth events, but this year in particular was very special to me,” he said. “It was amazing to see the charity work that was being done for the fire department and the love that was poured out all over the community. I’m very encouraged to love God more and do more for others.”

Jim Wiegand has served as the Senior Pastor of the Freedom Center for 20 years. He’s always excited to explain why the church does so much for Fenton. “People ask us every year why we do this huge event, and our answer has been the same for the past 19 years. It’s because we love God and we love this city and this is the best way that we can think of to love both together at the same time. This year, we gave away over 1,250 hotdogs, 800 ears of corn, and 2,400 bottles of water, but most of all we gave the love of God in a tangible way to thousands of people in a single evening.”

As homogenous as some label Fenton to be, and as exclusive as many would like to paint the church to be, the grounds of this particular community-oriented event were littered with people of all ages, backgrounds and faiths. Pastor Wiegand believes that this type of community engagement is what is required of the Church. “The Church belongs outside the four walls of its building as often as possible,” he said. “The world that Jesus gave his life to save is worth our very best.”