Raymond Kusch felt suspended in time after an improvised explosive device (IED) sent him hurtling through the predawn air near a Taliban hotbed in Helmand Province, Afghanistan. 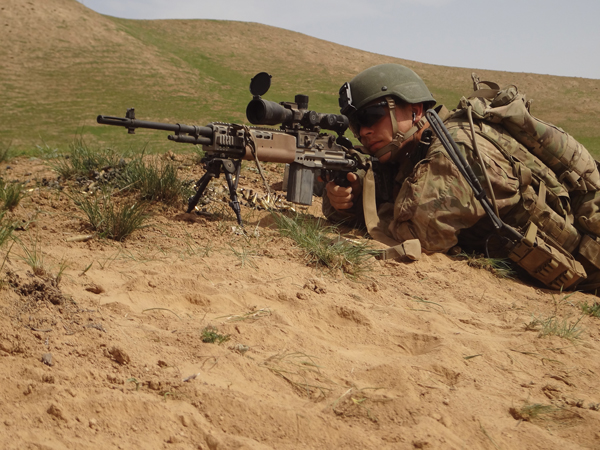 Yes, there was time for the 21-year-old Army infantry leader and sniper to ponder thoughts while ten feet off the ground, on his way to landing to nearly 15 feet from where he set foot on the IED in the early morning hours of July 9, 2012. “I was flung forward and worried I was going to land on my neck,” recalls Kusch, who was part of a mission to ambush an IED factory. “I had to get my body twisted around to be sure I landed on my back. So many things were running through my mind, but time seemed to slow down significantly which I later learned is a sign of a traumatic brain injury.”

Kusch did come to rest on his back, but had no idea how extensive his injuries were. A portion of Kusch’s left leg was gone, his left hand was broken and muscle was blown from his right arm, causing nerve damage to his hand. Shrapnel wounds littered his body, burns darkened his abdomen and his ear drum was punctured. And, that was just the visible aftermath.

Clinging to life, Kusch had indeed suffered a traumatic brain injury and post-traumatic stress disorder was a given if he survived. “I landed hard, my helmet was knocked back and night vision goggles were no longer on my face,” says Kusch, who later endured gastrointestinal problems and chronic kidney disease as a result of the blast. “I remember thinking ‘I guess I’m going to be dead now,’ before checking to see if I could still breathe. It was difficult, but I started pulling air into my lungs.” The unit’s medic reached Kusch and confirmed the gravity of his situation, but quickly assured the popular soldier he was going to make it. “We are trained that shock is real and sometimes, adrenaline in battle situations is so strong that people don’t even realize they’ve been wounded,” says Kusch, who also spent a year in Iraq. “I thought I had just lost part of my leg and taken shrapnel to the groin, but then was told about everything else. I had no idea if I was going to survive.”

After being stabilized, Kusch began his long road to recovery, first in Germany and then at Walter Reed National Military Medical Center in Bethesda, MD. Eight years and more than 20 surgeries later, the Clio resident wears a prosthetic left leg and still bears physical and mental scars from his near-death ordeal, but Kusch’s life could hardly be more fulfilling. 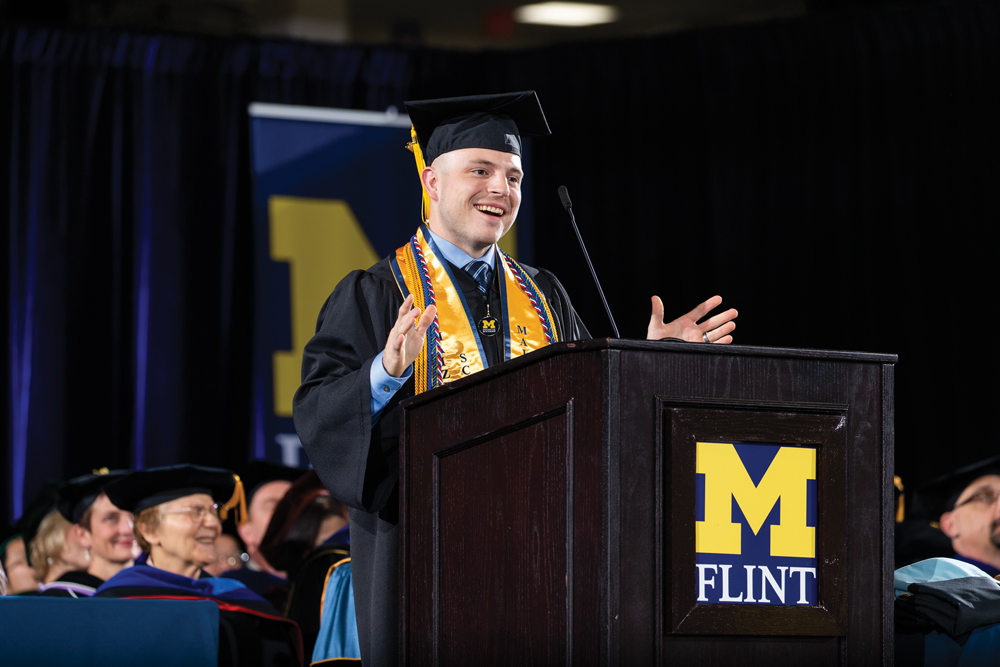 The 29-year-old is a successful businessman and graduated from the University of Michigan-Flint last December with a 4.0 GPA and a collection of academic honors. Later this year, Kusch celebrates ten years of marriage to high school sweetheart, Alyssa. He also began playing hockey at a friend’s invitation about three years ago and overcame a shaky start to join the Saginaw-based Spirit Warriors disabled veterans’ team, another adult league squad and UM-Flint’s team of otherwise able-bodied skaters. Earlier this year, Kusch was named to the United States standing amputee squad for the now-postponed International Disabled Hockey World Cup in Las Vegas. 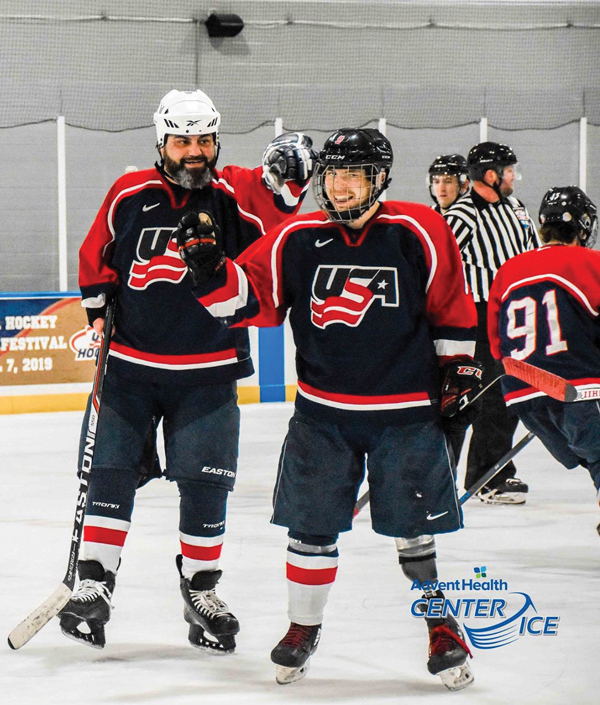 In late April, Kusch was stunned to learn he was USA Hockey’s Disabled Athlete of the Year. “J.J. O’Connor (USA Hockey Disabled Section Chairman) called to say he had some good news which left me speechless,” says Kusch, who officially retired from the military in 2015 after nearly eight years of service. “A couple of friends had said they were going to nominate me, but I was not even thinking about it. The award is huge because it’s another way I can inspire others in my situation to not let their disability stop them.”

His first experience with hockey, however, was a nightmare when friends invited Kusch and his wife to an open skate. In fact, he has a name for the production that it was. “I call it ‘Bambi On Ice’ because I could barely stay upright,” he says. “I was holding on to the side boards and my prosthesis was not working well with my rented skates. It was painful, terrible and I didn’t make it around the rink once.” Less than a year later (fall of 2017), Kusch began his second year at U-M Flint and was working at the Student Veterans Resource Center when his boss, also a disabled veteran, invited him to join the Spirit Warriors, who play mostly charity events. Kusch was understandably leery, but agreed to give the sport another shot. “I told my boss I had already tried hockey and it didn’t go well, but he was convincing and my second experience with the sport was completely different,” he says. “The coaching staff was amazing and within 15 minutes, I was chasing pucks around the ice. I was hooked.” As with everything else he takes on, Kusch thrust himself into his new favorite sport, soaking up knowledge from Warriors coaches and taking private lessons. “Being named Disabled Athlete of the Year is a great tribute to the person Ray is,” said Warriors Coach, Bill Paige. “It has not always been easy for him, but Ray has always wanted to do anything extra to improve. Our team is blessed to have him.”

His confidence growing, Kusch responded to an email later that year inviting UM-Flint students to hockey tryouts. However, Kusch soon realized how much of a leap in competition attempting to join an able-bodied college team was. “It was pretty clear, at that point, I did not belong on the ice with those guys, but the coaching staff invited me to continue practicing with the team,” he says. “It was a great opportunity to show I was willing to learn and build my skills.” Kusch’s academic load eventually forced him to step away from the team, but he continued taking lessons and playing for the Spirit Warriors. Impressed by his progress, friends encouraged Kusch to give college hockey another try last fall. 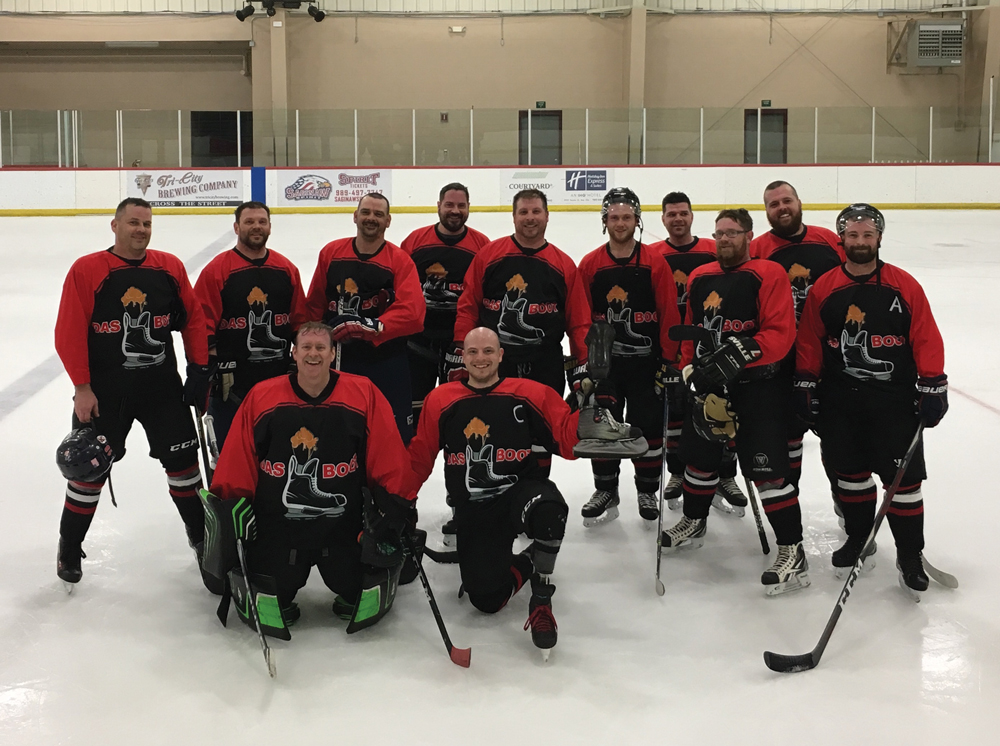 This time, Head Coach Mike Schunot and his staff granted him a roster spot. “I was a better player the second time around with better hockey sense,” he says. “I proved myself physically and coaches gave me more and more shifts during games. The guys showed me nothing but love and even let me be the victim of some good-natured pranks.” As a December grad, Kusch was only eligible for the season’s first 11 games, but tallied an assist. He was also a defensive pest, forcing several turnovers. “We were all ecstatic to have Ray on the team,” Assistant Coach Nick Karstens said. “He was ready to push himself further whenever he touched the ice. The biggest thing Ray brought was leadership. Every player and member of our coaching staff looked up to him.” 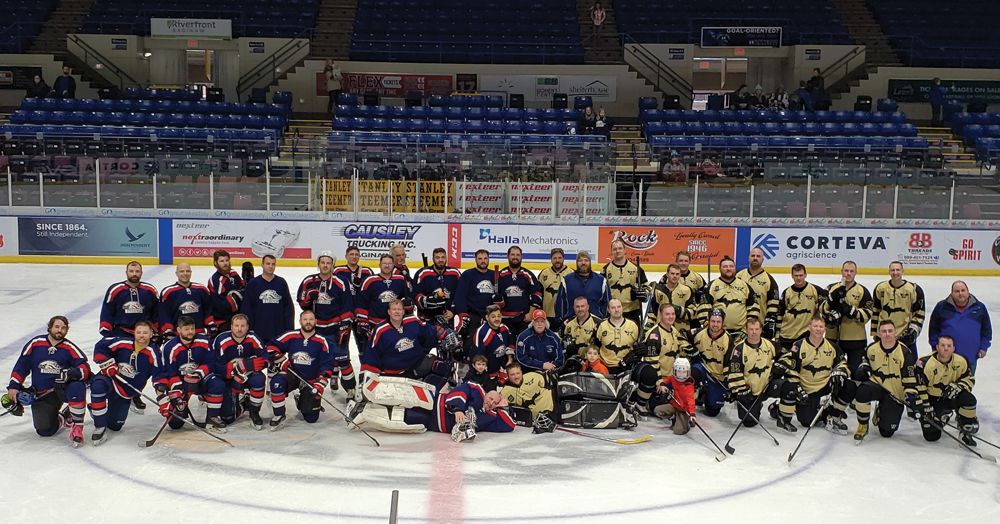 To prepare for the World Cup, Kusch continued skating with the team following graduation as well as the Spirit Warriors and his adult league squad. His private lessons increased to three, sessions per week before the coronavirus pandemic put an end to all of that. He has been rollerblading and exercising at home to keep fit and is hoping to hear of a new date for the World Cup.

Kusch graduated from UM-Flint with an entrepreneurship and innovation management degree and earned the school’s highest academic honor – the Maize & Blue Distinguished Scholar Award. He was also the 2019 recipient of the Outstanding Student Award in Entrepreneurship and Innovation. Kusch begins graduate school at Notre Dame this month. The Gibraltar native is also CEO of Kusch Holdings, a consulting and investment firm for small businesses. He discussed the benefits of falling – literally and figuratively – while giving UM-Flint’s December commencement speech. “Falling is proof of pushing yourself as far as you can currently go and every time you get up, you’ve learned how to go a little bit further,” Kusch said. “I challenge all of you to continue falling. If you are willing to get out of your comfort zone and pursue goals, falling will be nothing more than an afterthought on your way to successes.”