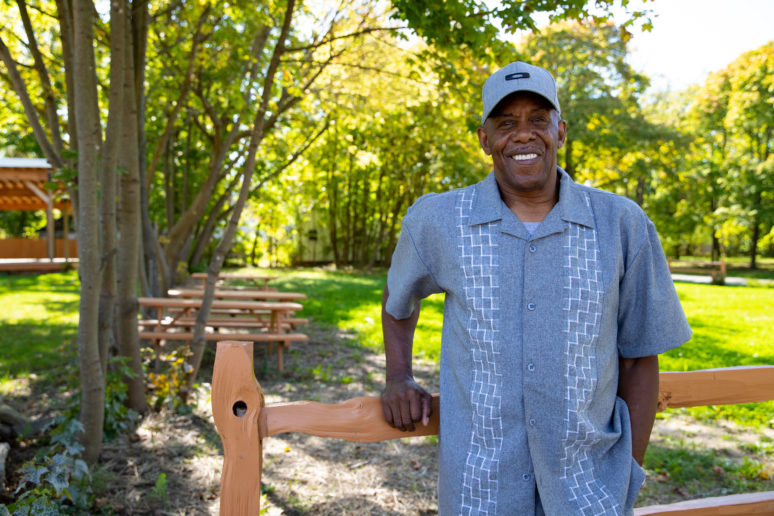 Pastor Robert Sherman McCathern founded the URC in 2016 to recreate a sense of community in Civic Park.

In 1919, Flint was growing. General Motors was beginning to roll and workers were flooding into the city looking to get into the auto industry. In no time at all, the city became quite crowded. In order to accommodate all of its new employees, GM purchased land set aside by the defunct Civic Building Association and began construction of one of Flint’s first neighborhoods – Civic Park.

Civic Park flourished until the early 1970s, when the suburbs began to pull residents from homes inside the city. When the ’80s came and GM began to withdraw from Flint, Civic Park took another blow. The neighborhood emptied and quickly became forgotten in the minds of everyone but its remaining residents. “When I got here, there were no existing neighborhood associations or programs,” says Pastor Robert Sherman McCathern, Founder and Executive Director of the Urban Renaissance Center. “The city and other community organizations didn’t have any plans for the neighborhood, either. It was a community that had been written off and abandoned.” 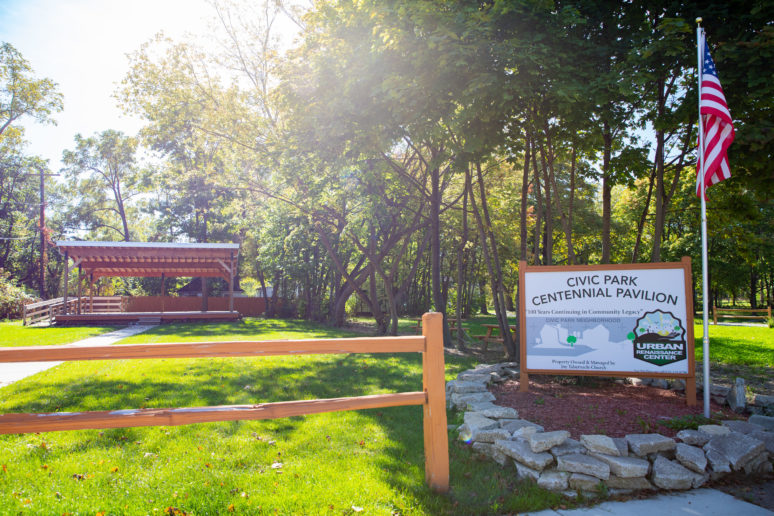 Pastor McCathern grew up in the projects of Pontiac during the late 1950s. He remembers a time when life was hard, but his local community supported and protected each other. He grew up in a truly sustainable neighborhood, centered around the local church, that held everything anyone could need within walking distance. It was this first view of community that he held in his heart when he first came to Civic Park and noticed a significant difference. “It was such a paradigm shift,” he says. “To see people do everything that’s right in America – work hard, retire from a life at GM – and then, sit on the porch of a home they own and look across the street at abandoned houses and broken lives or be afraid of their neighbors. It didn’t sit right with my spirit.” He got to work and in 2016, established the Urban Renaissance Center (URC) – the social service arm of Joy Tabernacle Church. “We created the URC because of the many social injustices that we could see,” he explains. “We decided that if God was doing anything in the sanctuary of the Joy Tabernacle Church, it should be visible in the area around the sanctuary.”

To start, the URC addressed the Civic Park residents’ perception of living in a broken neighborhood by boarding up abandoned homes and creating a vision of a thriving community. To date, the URC has boarded over 1,000 homes. McCathern, with the help of Gordon Wallace of Signarama and the Ruth Mott Foundation, created window and door facades that the URC affixed to certain abandoned properties. “Some people believed that they were real windows and doors. They could see past the abandonment and see a neighborhood,” says McCathern. “They were able to begin believing in Civic Park again.” 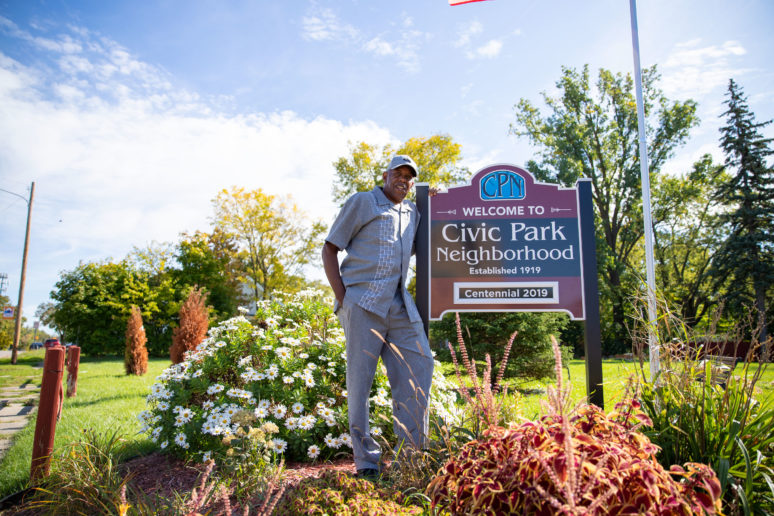 “We have to prove to ourselves that it can be done.”
Pastor McCathern

Soon, other organizations began to respond to the changes at Civic Park and offered help. The Central Nazarene Church dedicated time to help the URC board buildings. The Genesee County Land Bank and Congressman Dan Kildee got involved to help the URC navigate historic protection rules and allow demolition of some structurally unsound houses. McCathern began to see a community coming together, but it needed something more. He kept returning to the vision of his childhood neighborhood and determined that Civic Park could be that neighborhood – entirely self-sustainable. “We are a food desert, computer desert, business desert and a school desert,” says McCathern. “How do communities such as this all over America rewrite their destinies? The ideal is to have everything accessible within a five- or ten-minute walk.”

McCathern enlisted the help of Dr. Otrude Moyo from the University of Michigan Flint, who taught the URC and Civic Park residents to identify the neighborhood’s assets instead of the blight. This mindset shift enabled residents to see a brighter future and the URC to begin building McCathern’s ideal community. UM-Flint students continue to help in the neighborhood with community projects and research. “It shifted how we see everything in our community,” states McCathern. “From that, we created the Ubuntu Village. We believe that now, if we create sustainability here, we can do it for our entire area and the rest of the city.” 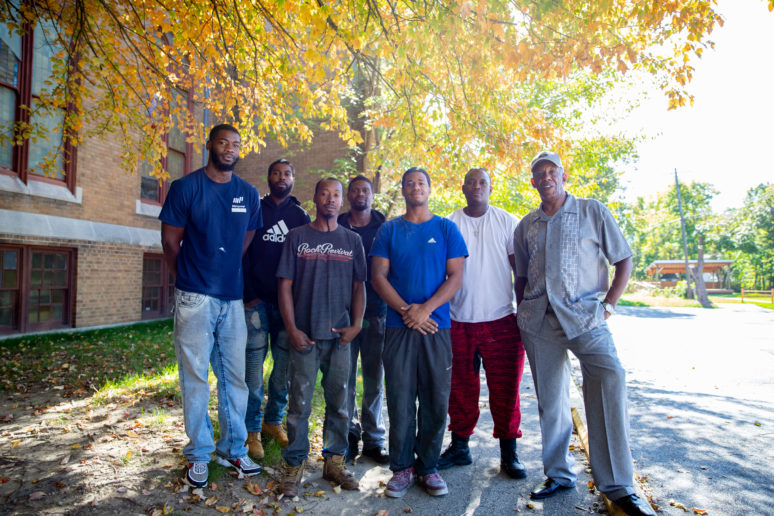 The Ubuntu Village was born of the Zulu philosophy of Ubuntu, meaning “I am because WE are.” It is a concept grounded in the understanding that all people are connected and that the thriving of one community member depends on the thriving of all other members. The Ubuntu Village exists in a 15-block radius around the Joy Tabernacle Church and includes buildings intended to provide everything a community member needs to be healthy and whole. Each building is unique and provides education and services to its focus population. The Agriculture House teaches lessons in gardening and land use, the Health and Wellness House acts as a resource hub to connect people with health care providers and professionals, and the Children’s House provides learning and activities, and also hosts the Claressa Shields Youth Camp. 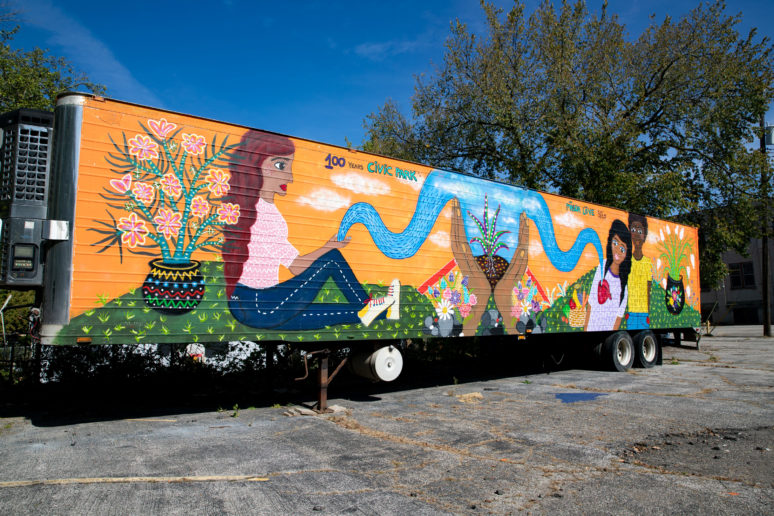 The Rebounding Force Transition House is the home base of the Rebounding Readiness Program, which teaches young men skills needed to succeed in future careers. As part of the Land Bank’s Clean & Green program, the Rebounding Force residents maintain neighborhood upkeep while learning valuable construction and interpersonal skills. Many program graduates now own houses in Civic Park and have maintained successful jobs outside the area. “When we started the Rebound program, a big transition happened,” says McCathern. “Community members came out to thank our young men. They began to be seen as assets and they began to see themselves as assets.” The Ubuntu Village also has various community gardens, a Heritage House and Women’s House.

This year, the URC officially started a program in collaboration with Families Against Narcotics, as part of their health initiative, to help those struggling with addiction. Next year, an amazing agriculture initiative begins with help from Convoy of Hope. “Convoy of Hope committed to work with us in the next three years to develop agricultural support for this neighborhood. They will help us determine how to create a food supply to sustain this community,” explains McCathern. 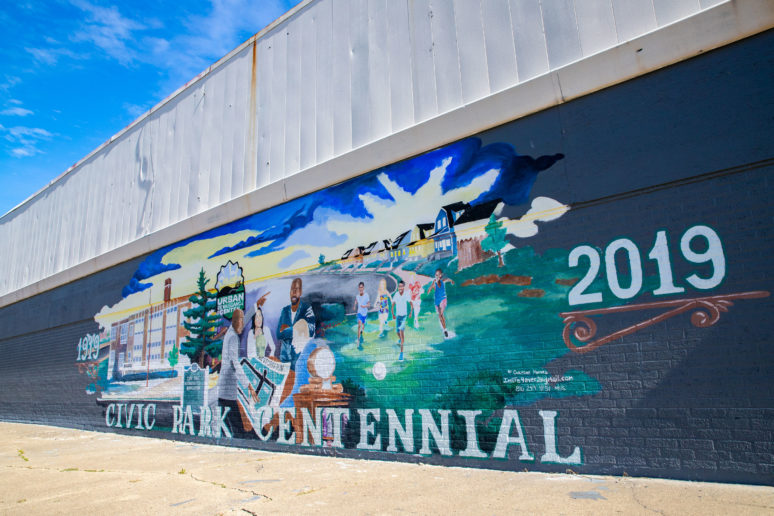 Civic Park is celebrating its centennial and the URC is uniquely positioned to lead it toward a bright future. Pastor McCathern sees potential in the Civic Park school building and the grounds around it. He envisions a thriving Chevrolet Corridor filled with African American businesses stretching all the way from Kettering to Civic Park. He sees a living, breathing and sustainable community for the next century. “We have to prove to ourselves that it can be done. We want to see reinvestment from families of all colors and incomes here. We want to draw people back in from the suburbs,” he says with hope. “The day I first pulled into the church parking lot, God told me that the reason I was born would manifest itself here. I’m seeing it come to fruition.”