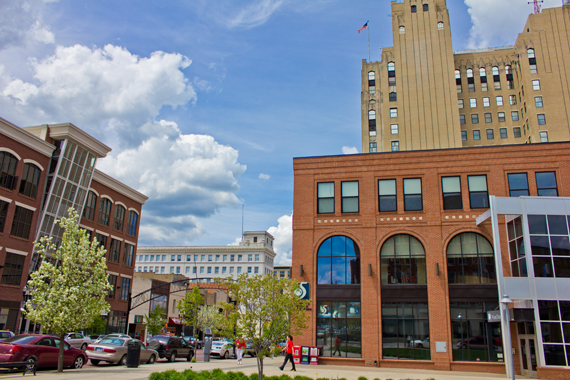 Many of us have enjoyed the recent business additions to Downtown Flint, an area almost completely devoid of life in the late 1990s that now teems with new ventures; but few of us know the men behind many of these projects, and even fewer know of their desire to see a better Flint. The men of Uptown are a heartbeat away from those in Flint, because they too are from Flint.

“Uptown” is a hot-button word around Flint, and there are assumptions and assertions both in favor of and in opposition to the group, but what you might find most is ignorance. That is, many people simply have no idea who or what Uptown Developments is. Bottom line: at a time when no one else was investing in Flint, these individuals dared to dream, and they defied the odds.

At the dawn of the 21st century, seven men assembled of their own accord with no agenda other than a desire to see a revitalized Flint. What became known as the Uptown Six—yes, that’s Uptown Six with seven members—was the collaborative effort of seven local businessmen to bring life back into the heart of the city. They invested equal amounts, and later invested again, and then again. Years later, the economic downturn would force three members out of the game, and the remaining four have by all accounts invested their initial amount several times over. To those who look at the numbers and think, Flint isn’t worth it, this model seems like bad business at the least and sheer madness at most; but Flint’s rebirth is more than worth the cost to these men. The following details the backgrounds and foresight of Uptown’s four remaining founders.

Phil Shaltz of Shaltz Automation lives a very open life Downtown. In fact, the only thing Phil seems to hide well is his age, since at 65 he doesn’t even look 50—credited perhaps to the fact that Phil is a runner, participating in the Crim every year since its 1977 launch. It is not uncommon to happen upon Phil daily at any one of Downtown’s common areas. Phil told My City Magazine that it was never a question of whether or not Flint was a wise investment, because he loves the city. He says that the greatest challenge was not creating a business Downtown, but rather, creating something lasting that could be passed down to another generation. With that goal in mind, Phil is not yet convinced that the city is effectively mentoring promising entrepreneurs who can take the reins of sustainable growth.

“We don’t have enough mentoring in Flint,” Phil said. “At 65, I can’t pass my business on to a 25- or 30-year-old. Where’s the 35 to 50 age group? Business has to be done collectively, with people who are in tune with what the city needs. There needs to be a male/female, black/white system of relationships to help mold people to start businesses. I think there’s a greater responsibility than just becoming profitable if you want to be a part of the community.”

Staying true to his convictions, Phil is reaching out to local businessmen in an effort to establish a network of people dedicated to fostering Flint’s future. This explains the commitment he and his wife Ardele have to the Community Foundation of Greater Flint’s Give Forward initiative, which aims to promote business to area residents in the 20-50-year-old age group.

Outside of the business world, Phil created a local nonprofit diaper bank, which has already distributed 600,000 diapers to those in need in the Flint community. He got the idea from Joanne Goldblum, who started the nationally recognized Diaper Bank of Connecticut in 2004. Phil plans to give away close to one million diapers through his partnership with the Food Bank in 2013 alone. Why does Phil do all of this? As a businessman, he says he is looking for a certain return on his investment: “My return on investment is seeing my grandson thrive in Flint,” he says.

Ghassan Saab is a longtime friend of Phil’s. What started as a summer job opportunity in 1966 would become a lifelong career for Ghassan. He came to Flint from Lebanon as a college student when he was invited to work for Sorenson Gross, and has remained in Flint ever since. By 1972, Ghassan became Sorenson Gross’ CEO.

Ghassan, much like Phil, considers it each man’s responsibility in life to do something to benefit the place he calls home. “Flint is my home,” he says, “and one of my core beliefs is that it should be your mission in life to do what you can to improve your surroundings.” Ghassan thinks fondly of the time when he and the other men of Uptown decided to band together to pursue such improvements.

“The idea of putting the group together began to germinate in 2001. We had all experienced both success and failure in Flint, but I felt that we needed to keep trying, so we decided that instead of doing a bunch of big projects, we would do one small project at a time, and it worked.”

Concerning the group’s choice to start with Downtown, a move which has received criticism, Ghassan simply stated that “without a city center, you don’t have a community.” From the center of the city, Ghassan looks around and sees great potential in Flint. “We have what it takes, that is, the correct resources, human and natural. We still have a motivated workforce, so we must pull ourselves up by our bootstraps and continue. The city is terribly underrated. We have an incredibly beautiful environment with access to great recreation, lakes, and major cities, and our cultural center is literally second to none. All these things make Flint a tremendous place to raise a family.”

Gary Hurand knows a thing or two about being raised in and raising a family in Flint. As the son of Arthur Hurand, the man who blessed Flint with Dawn Donuts, Gary has a lot to live up to. His father, who was akin to Flint royalty, took a job in the plant at the age of 13, and afterward worked for his own business until he was 95. He served in World War II, and returned to Flint after the war “committed to his community,” as Gary says.

Gary’s upbringing under such a notable man as Arthur gave him a strong work ethic and a desire to be active in the community. A Central High School graduate, Gary walked to school every day, and his mother still lives in the house where he was raised on the east side of town. After growing and eventually outgrowing the family business, Gary dedicated most of his time and interests to restaurant construction in the area.

When the men of Uptown began to gather, Gary found himself in the mix, and he considered it a chance to continue being community minded while also “learning a new skill.” Gary stayed involved because he liked the idea of working with several different types of businessmen and organizations. “Uptown is a true partnership of the public and private sector. It took non-profit, for-profit, and governmental elements to make it work.”

Much like Ghassan, Gary finds a certain practicality to starting Downtown, and much like Phil, he thinks that recent growth can only be sustained by young innovators. “We just wanted to do good and hopefully do well, and we’ve accomplished good so far. We’re trying to grow from the center out, and I’d like to see ripple effects in the neighborhoods. This is a great town. It’s resilient and diverse, but we need young innovators, and we have to find a way to bridge the gap. We need to keep our kids here.”

Troy Farah, Co-Managing Partner of West Second Street Associates is the youngest remaining member. Troy is the son of George Farah, a Palestinian migrant who left Jerusalem in 1954 and found in Flint a new place to call home. George purchased the Capitol Theatre building in 1975, and the family business has operated from there since the 1980s. Troy is a 1982 graduate of Powers Catholic High School and a 1987 graduate of the University of Michigan.

Troy says he is impressed by how everyone has come together with a “common vision” and “a lot of cooperation over the years.” Though Troy humbly maintains that he is learning from the other men involved, he has accomplished much in his own right, and rightfully asserts that he and his family have been in the business of revitalizing Downtown Flint longer than most. When the chance to partner with the other men of Uptown Developments came about, Troy understood the immediate gratification of fixing up buildings, but he was amazed by the resulting impact.

“I figured we would renovate the buildings, but I never imagined the catalytic impact it would have: University housing, the Durant Hotel, the Flint Farmers’ Market. I believe it has raised the hope of the entire community, and that’s invaluable.”
Troy’s words have weight, even if they do come from Uptown’s junior member. He says that he sees social matters as Flint’s biggest challenge. “We have to confront the issues here in our backyard. Finding a way to improve these conditions is important.” In relation to Gary and Ghassan, Troy sees Downtown Flint as the best place to start, and he thinks progress Downtown should spur others to effect change in other neighborhoods.

Troy combined all of the parables provided by the men of Uptown into this aphorism: he called what Uptown does “real estate philanthropy.” Just like Phil, as a businessman, Troy is looking for a return on his investment. “It’s not a financial return on investment. The return on investment is the economic impact on Downtown and the benefits to the community. You can inspire change by revitalizing blight.”

After all the rumors have fallen to the ground, these words endure. Here are the men of Uptown Developments for everyone’s eyes to see: a group committed to and actively pushing Flint’s rebirth. They are from Flint, they live in Flint, they work in Flint, and they invest in Flint. A love for this city runs through their veins and it has for generations. They are palpable and personable people, the kind to stop mid-stride to shake your hand and share a laugh.