Uploaded by 2017 All-State Dream Team defender Rachel Phillpotts, the video begins with highlights from last year’s state-tournament run which ended in a 4-0 blanking of Freeland in the Division 3 state title game.

Then, it shifts to candid images of players clowning around on the team bus, sidelines and during practice breaks. Members of last year’s team are also shown breaking into impromptu dancing at an area Wal-Mart, bonding at team meals and celebrating a teammate’s birthday.

Finally, the video returns to last season’s thrilling conclusion, conveying the emotions of the Chargers as they hoisted the championship trophy as memories of a difficult loss to Hudsonville Unity Christian in the 2016 championship game melted away.

In the final minute, the team is shown gathered around a large, colorfully-painted rock in front of the school’s fieldhouse. In the center is the motto “strong alone, unstoppable together.” 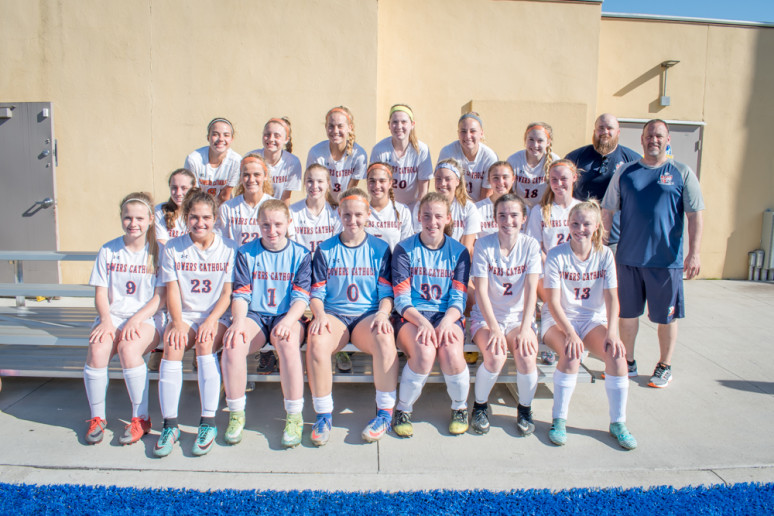 “That sums up what our program is about and it’s what drove us last year to win a championship, especially for our seniors,” says junior forward Kennedy Myers, who scored the state title game’s first two goals. “We did not want them go through losing in another state championship game. Everybody was working together and not concerned with individual stuff.”

While the current motto has not been around throughout the program’s history, past teams have practiced it and not being preoccupied with individual glory, honors or statistics has served the Chargers well.

Since 1995, Powers boasts 15 state semifinal appearances, including eight championship-game berths and state titles in 2011, as well as last year. Of all girls soccer teams in the state, only Unity Christian (18) has reached the semifinals more often during that time.

The Chargers were also seeking a 19th consecutive district championship this spring in addition to their 11th league and 11th regional titles in the past 16 seasons. The program’s overall record since 2003 is 276-67-30.

“We also stick to the motto of not looking ahead, but just focusing on winning the next game and improving because that’s the only way we are going to, ultimately, achieve our goal of repeating as state champions,” says coach Art Moody, whose record in 11 seasons at Powers was 198-41-19 through May 14. “We have fun together, share plenty of laughs, but there is no fooling around when it comes to preparing for games.”

Players, of course, chose to attend Powers, a private Catholic school in Flint. Count Rachel Rasins, whose soccer career has already taken her to Europe and back, among those thankful she did. The junior forward and two-time, first-team All-Stater spent time honing her skills at the prestigious Bobby Charlton Soccer Academy in Manchester, England at age eight and at the AC Milan School of Soccer in Italy three years later. Ranked among the nation’s top 80 Class of 2019 recruits by Top Drawer Soccer, Rasins played for the Vardar Soccer Club’s Elite Clubs National League team, as well. 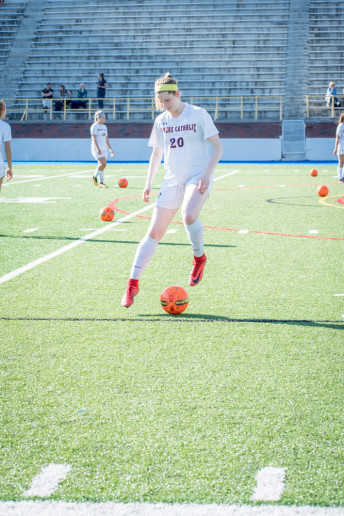 “I was not sure, at one point, where I was going to go to high school, but I found the right school for soccer and everything else,” says Rasins, who is considering offers from Division I colleges. “I’ve loved being part of Powers’ soccer program from the beginning.”

Despite the graduation of 12 players, including four All-Staters, the Chargers reloaded nicely this year and have been atop the Division 3 state rankings all season. “The season is going great and we are doing what’s needed to repeat as state champions,” says Rasins, who led the Chargers with 25 goals through 16 games. “We just need to keep working hard on areas we know we can be better in and focus on our next opponent.”

Moody is optimistic, but cautious. After all, the Chargers have been in this position before.

“We’ve learned that nothing is guaranteed because in 2012, we had the most players back from a state championship team but fell short.” He stresses, “whenever you are ranked No. 1, there is a big target on your back. It’s never easy to repeat a state championship, which brings us back to taking one game at a time.”

Other returnees who were starters in the state championship game are forwards Sophie Bubnar (senior) and Domi Amato (junior) and goalkeeper Natalie Deitering (sophomore).

“Rachel has great confidence in her scoring touch and can score from 25 yards out or take the ball to the net and bury it,” Moody says. “That natural goal-scoring ability is hard to find. Sophie’s technical ability to create offense is unreal. Kennedy is so fast that we can always find her with a long pass and know she will control it and take the ball to the net. Domi is also important to generating offense.”

Deitering was allowing just 1.04 goals per game with nine shutouts through 16 games. She only gave up two goals in last season’s final four playoff games.

“Having our goalie back is great because we are really comfortable with Natalie in net,” Myers says. “That’s made having new players on defense easier and our experience upfront makes us really strong.”

Fortunately, senior Maddie Cardinal, a midfielder who played for Powers as a freshman and sophomore before spending last season earning All-District honors at Bandera (Texas) High School, has returned. Her sister Kate, a defender, is the lone varsity freshman.  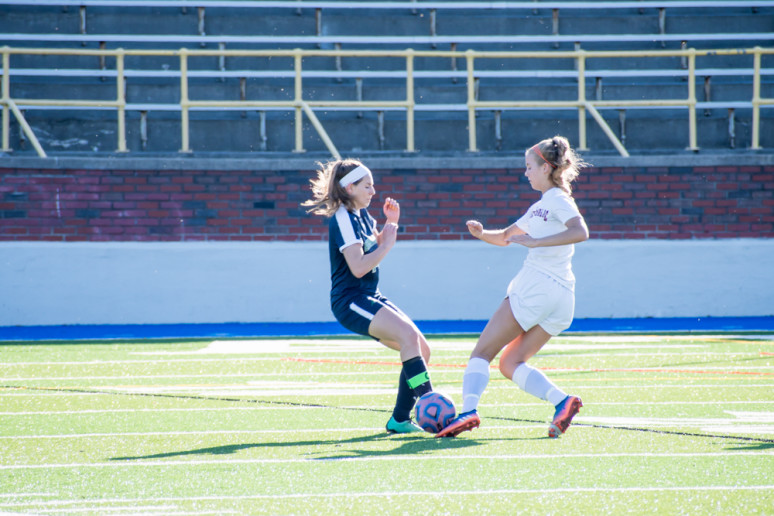 “We have fun together, share plenty of laughs, but there is no fooling around when it comes to preparing for games.”
– Coach Art Moody

“The good news about the players we had to replace is that the competition for those open spots has been a positive thing and our defense has still been solid,” Moody says. “It also helps to have an experienced, talented player like Maddie back and her sister is contributing significantly. Camryn and Emma Murlick are playing bigger roles this year in controlling the play. They have gone from playing 40-50 minutes per game to nearly 80 minutes.”

Three years later, the Chargers broke through for their first state title, knocking off six-time defending champion Unity Christian 1-0, on a first-half goal by Maddi Reynolds. She later helped Grand Valley State to a pair of Division 2 national championships. 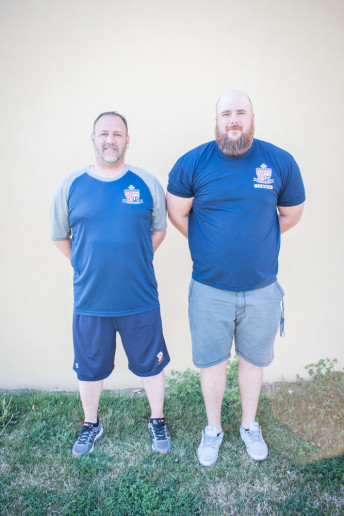 Moody is assisted by Michael Korhonen, Jeff Tippett, Todd Carter, MaKenna Lumley and Donnie Pumphrey. “Our coaching staff has great chemistry, doing what’s needed to build a successful program,” he says. “We’ve always had great leaders who bring the team together and keep everybody focused. Our practices are very competitive and intense which carries over to how we conduct ourselves when we show up for games.”

Rasins can attest to that.

“Practice can be very, very competitive, but we all have a great time and push each other to bring out the best in each other,” she says.

“The biggest thing for me was hearing the final horn and running onto the field to celebrate a state championship together,” Rasins recalls. “Unbelievable.”

Should they advance that far, the Chargers will defend their state championship June 16 at Williamston High School. Regardless of how this season ends, however, Myers is thankful one more remains for her at Powers. “From the start, I could see why this is such great program to be a part of because everybody is so serious about having a great team,” she says. “The coaches are incredible and there to help you improve. It’s a great environment to be in.”