Peabody Ice Climbing Club in Fenton was founded in 2005 by a small group of climbers who introduced themselves to the world-class ice climbing resources in and around the Great Lakes. Combining the property at the family’s old apple orchard (which retired in 1996) and a commercial landscape sprinkler system, it began. The group was small at first, but there are now 50 club members who join in the fun almost every season, and it is the perfect place to train before heading off for grander adventures.

“It’s a recreational sport that some people take more seriously than others,” says Garrett Peabody, owner and operator of Peabody Ice Climbing. “We figured that because the ice climbing season is so short, anything that you do only two or three times a year, you’re not going to get very good at! So, we had the commercial sprinkler system set up, and it grew from there.” 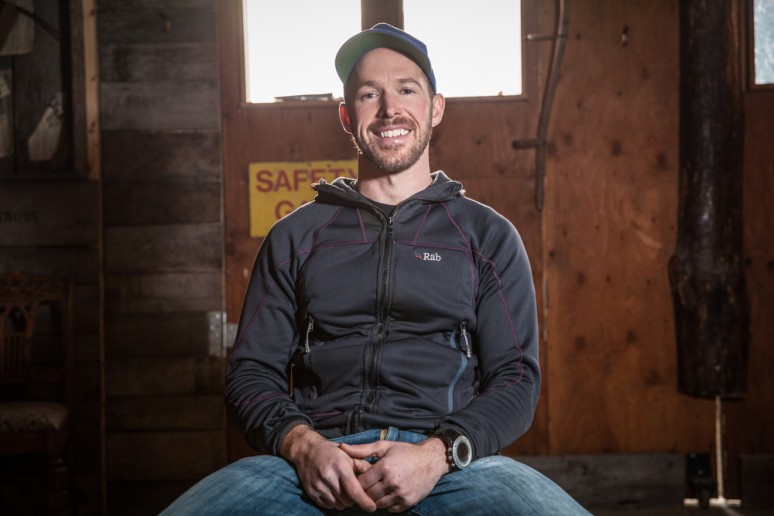 Garrett, who has been climbing for 13 years, is an AMGA Certified Single Pitch Instructor, meaning he can guide climbers up to a height of 200 feet. The AMGA is an internationally recognized group of collected wisdom that requires several days of training and an exam to become certified. Garrett has been climbing all over the U.S. and the world. In 2007, he moved back to Michigan and started his contribution to the state’s world-class ice climbing culture.

Peabody Ice Climbing also provides beginners with an introduction to the sport in a controlled environment, along with the help of an experienced and certified guide.

In 2009, Peabody Ice Climbing opened to the public, started renting equipment, and formalized things with insurance waivers and reservation forms. Their original intent was to only build a structure for training, but it ended up becoming a venue for those who want to try it just once, as well as drawing experienced climbers from all over the mid-west. “Sometimes, people are hooked after their first try,” Garrett says. “You can see it in their eyes that they’re going to be back.” Climbers come from different parts of Ohio, Chicago, Kentucky Pennsylvania, West Virginia, and even Ontario, Canada.

The two ice towers are 65 feet and 45 feet tall. “Fortunately for us, we have a really great resource,” Garrett says. The property also has a bunk house for committed ice climbers who stay the night, a mixed climbing wall, and a sauna for warming up at the end of the really frigid days. 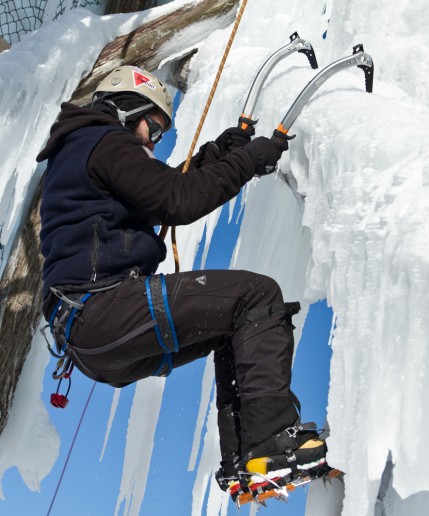 Last year, nearly 1,300 people visited Peabody Ice Climbing to learn how to climb. Ages of participants range from 15 to 72, and about half of the regular climbers are women. “Really, a lot of the climbers are ‘outdoor’ people who want to get outside in the winter and ran out of stuff to do around here, so they’ve gravitated toward ice climbing,” says Garrett.

Ice climbing gear is similar to that used for rock climbing with the harness, helmet, and the knowledge of belaying (rope and anchoring technique), in addition to boots with steel crampons and two ice axes in your hands. The belay is the biggest concern for safety of the climbers. “The safest way to go about doing it is to become familiar with the belaying system inside a rock climbing gym,” Garrett says. “We’d rather see people prepared and having a good experience.”

The main focus at Peabody Ice Climbing, of course, is safety. Garrett and the other well-seasoned ice climbers assume a tremendous amount of risk at the climbing facility, and minimize distractions by not having crowds of spectators. Ice climbing takes a unique level of awareness and safety consciousness.

Rock climbing as a sport has grown substantially in the past five years, and ice climbing is not far behind. These climbers who are primarily rock climbers sometimes cross over into ice climbing through mixed climbing. Mixed climbing is new to the U.S., utilizing the same equipment as ice climbing, but there is only about an inch-thick layer of ice on top of rock, rather than climbing just ice. The sport, which is still in its infancy, is growing because it most realistically simulates climbing on real rocks with icy coating. The challenge becomes conquering steeper cliffs and overhanging roofs that water won’t cling to. 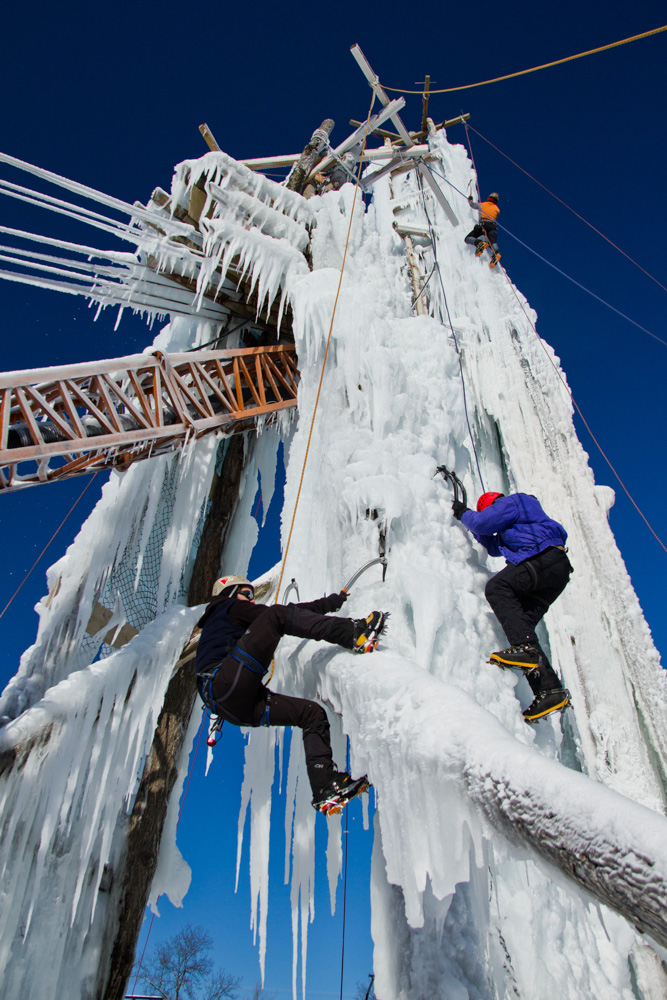 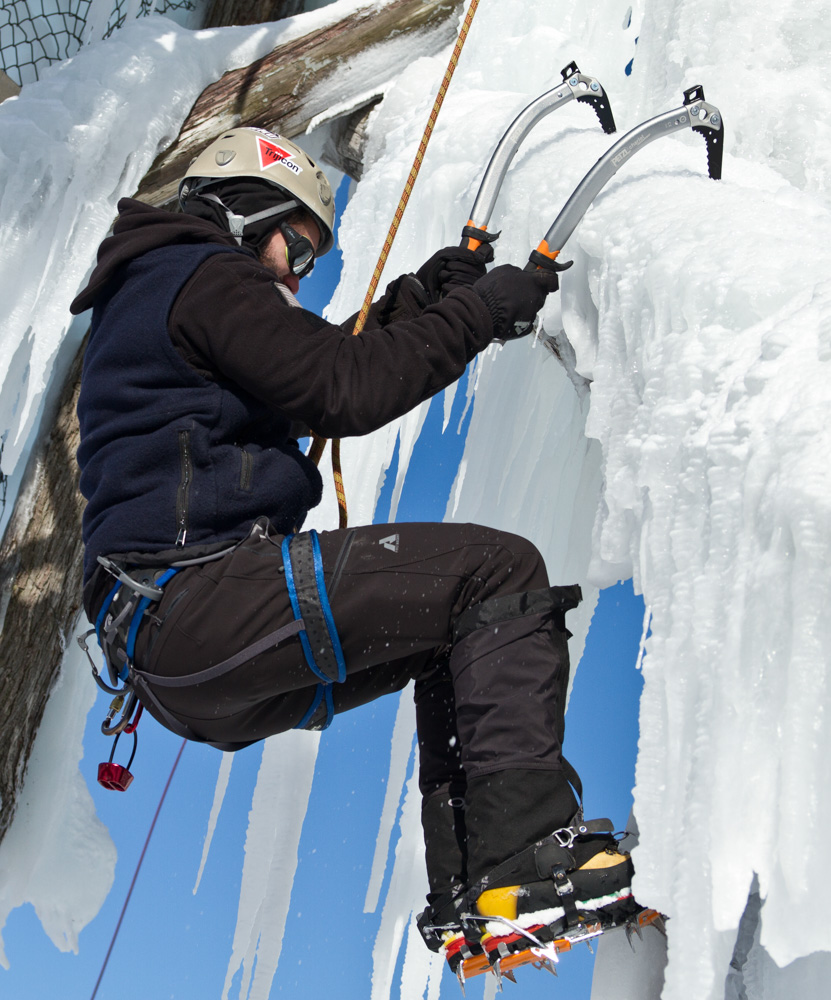 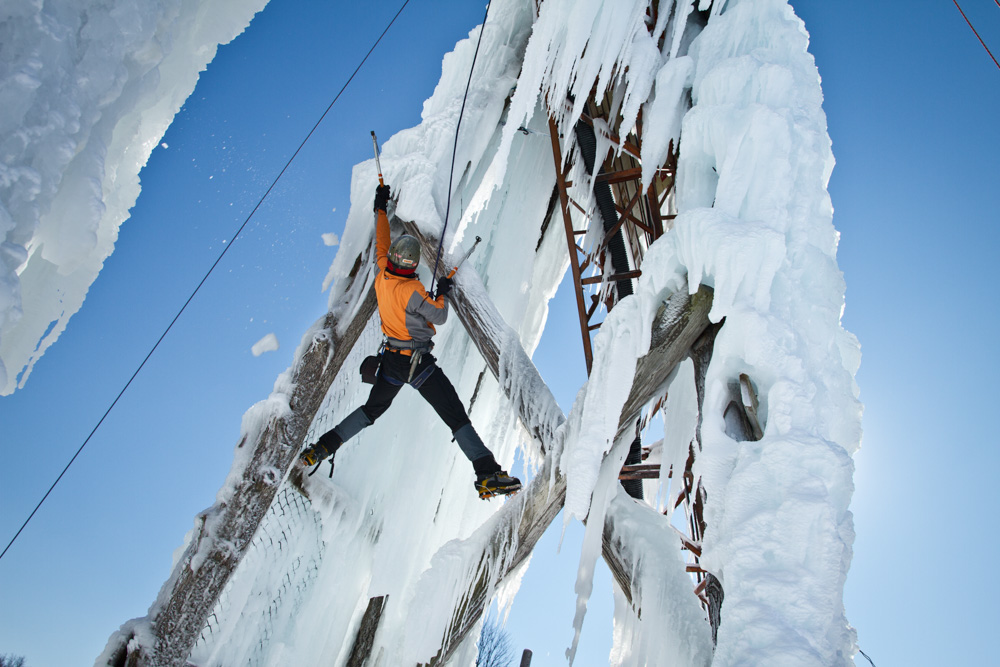 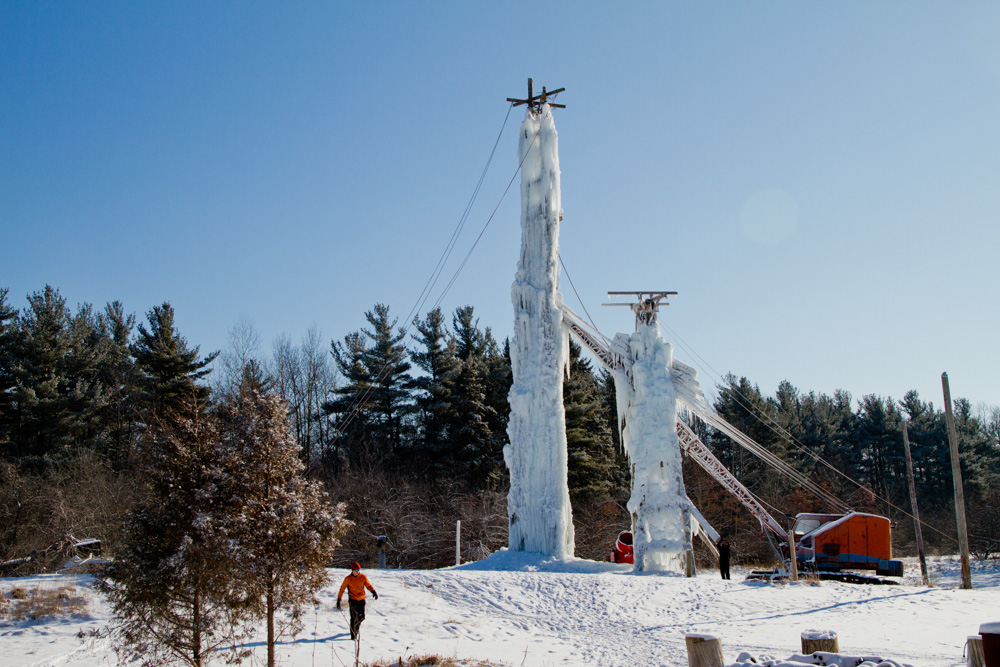 “Climbing is 90 percent a head game,” Garrett says. “You have to rely on luck for a certain amount of time to gain the experience, and then rely on experience. A lot of it is about controlling as much as you can, because a lot of is so uncontrollable, being out in the elements.”

Around Michigan, the best spots for ice climbing are on the eastern and north side of Lake Superior, Thunder Bay in Canada, the Pictured Rocks, Munising, and various parts of the UP. Up north, climbers have to cross-country ski in several feet of snow, just to get to their climbing destination. “It really depends on where the ice is best,” Garret says.

The climbing culture in the UP is celebrated with the Michigan Ice Festival, which will take place on February 10-14.

A sense of winter preparedness is vital, for ice climbing is not for the faint of heart. “It’s a Type 2 kind of fun,” Garret says. “It’s not really fun while you’re doing it, it’s more fun when you’re hanging out afterward looking back at it.”
Garrett Peabody