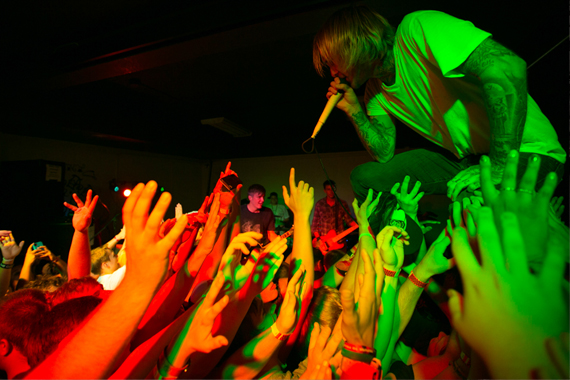 It is a joy to see and experience the developments in Flint of late, particularly those Downtown. New restaurants and dozens of events make for memorable nights on end. A recent transplant to the city or returning resident might mistake novelties to Downtown as places with a longstanding tradition, but only a handful of the most popular places can claim a history longer than ten years. One such place is Flint Local 432, an entertainment venue which has given stage to hundreds of bands, and has effectively drawn thousands of people to Downtown Flint for nearly three decades.

Joel Rash serves as Director of Flint Local 432. Rash explains, “Flint has always had a good music scene. The auto industry brought in many people from all over, and each person brought a musical heritage with them.” Rash’s childhood was replete with examples of Flint’s vibrant music scene. “I remember my dad watching Sherm Mitchell perform jazz at the Sports Coup Lounge and the Palace Lounge,” he says.

Once Punk Rock gained headway into the mainstream music market in the early 1980s, a slew of garage and hall show bands sprang up in Flint. The Capitol Theatre was able to bring in select acts of note at this time, including the Ramones and AC/DC. After attending these shows for several years, Rash and a posse of fellow Punk Rock enthusiasts, which included Chris Everson of Downtown Development Authority, decided to collect local acts and give them a stage on which to showcase their talent. The young promoters were able to put on occasional events from 1984-1987 in the basement fallout shelter of Capitol Theatre. By 1994, the group assumed the 432 S. Saginaw Street space, and hence the name Flint Local 432 came about, which was a “tongue and cheek nod to our union heritage,” as Rash explains. The new official promotion would wind up using Capitol Theatre, Masonic Temple, The International Institute and even Metropolis as venues over a 20-year span from 1987 to 2007. Rash says, “We had a never-ending supply of buildings available to us back then.”

At the end of their glorious 20-year run, the group came together to decide on the fate of the Local. They opted to go out on top, as venues became scarce and all the former Punk Rockers began adopting what Rash calls “more grown-up” lifestyles, but after about three years in defunct status, fate would lend Rash and a few others the opportunity to try things with the Local again, thus reassembling in a very Blues Brothers-esque, “We’re putting the band back together” way. Rash held a public meeting to see if there was any interest among the people. He thought to himself, If 30 people show up, maybe we have something. As luck would have it, 120 people turned out for the event, compelling Rash and company to give the people what they wanted. In one of those “a guy who knew a guy” flukes, they were able to acquire their current location at 124 West First Street, and after a nearly $300,000 investment to get the building up to code, the Flint Local 432 reopened its doors in 2012. In the first year of their return, they featured over 120 acts, and were able to manage this on a budget so slim that many volunteer hours were required.

Along with the new location and re-boot came new ideas and a sense of permanence, prompting the Local to become a hub for all things art Downtown. The stage has become host to theatre, dance, fashion shows, short films and even casting calls. Speaking on the recent introduction of other artistic formats, Rash says, “I know the frustration of having that great idea, but having nothing happen, and I’ve seen so many talented friends go to other cities to be part of something there instead of here because if you can’t make it happen where you’re at, you go where it’s happening. We wanted to be the place that told young people and artists, ‘Yes,’ since the default answer from most businesses is, ‘No.’ For a lot of people, we’re a last resort.”

The Flint Local 432 is the manifestation of a love for music and a love for the city. It serves as a place that allows Flint the chance to promote the talent of her people, which adds to the many things that make her great. Rash explains, “I like a lot of places, but you only get one home, and Flint is my home. Everybody thinks they’re unique, but Flint really is a unique place with a unique history. We had a lot of success and a steep decline, but I know that the strategies we are using to address problems here will be used in other cities, and we’re proud that the Local is a small part of those strategies.”