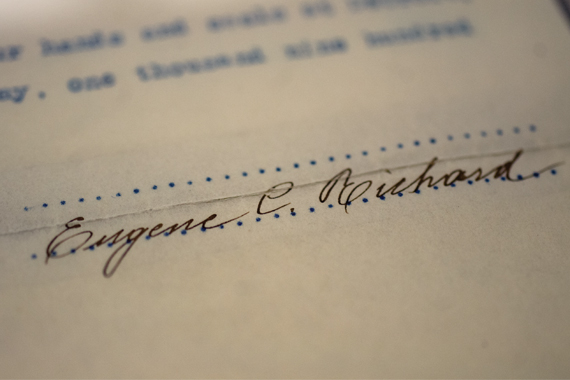 The American auto industry was built haphazardly, in leaps and bounds, regressions and sudden spurts of innovation. The whole nation became fascinated with automobiles and worked concurrently, almost feverishly, to be the first to begin producing this machinery. Early automotive companies were named after the men who began them: Franklin, Oldsmobile, Marmon, Ford, Chrysler etc. Some of these companies, and their eponymous owners, still live as legends in public recollection. But what about Buick?

Think of it: your name affixed to millions of consumer goods, your marque established in the American consciousness, your brand recognized as the epitome of luxury for decades… and your life completely forgotten. In stark contrast to the well recorded history of the car bearing his name, the life of David Dunbar Buick remains a topic that has not generated much interest or enthusiasm. The names of other men of Buick Motorcar also stand under the car’s shadow, and for the most part, they have been lost to history; but their contributions built the car that helped build America. Let’s take some time to remember the unsung heroes of the automobile industry.

David Dunbar Buick was born in Arbroath, Scotland in 1854. His father, Alexander, moved their small family to Detroit, MI in 1856. He died three years later, leaving a penniless young widow and five-year-old child to fend for themselves. Jane Buick remarried in 1865 and David, who was then 11, quit school and left Detroit to work on a farm. Apparently farm life could not captivate the mechanically-minded Buick, because he returned to Detroit four years later and became an apprentice at a machine shop downtown. He had skill, as evidenced by his promotions at the Alexander Manufacturing Company, where plumbing fixtures were made. Years later in 1882, Buick and his associate, William Sherwood, bought the ailing company they worked for and turned it around. Buick himself patented 13 different plumbing inventions. By the 1890s, he was moderately prosperous.

As the American economy roared into the industrial age following the Civil War, men all over the nation began tinkering. Buick also began tinkering. The gears and mechanics of the gasoline engine captivated him. In 1899, after selling his plumbing business for a tidy profit, Buick formally entered the engine market – if market it could be called – and hired a Detroit machinist named Walter Marr, who had moved to Detroit in 1896 with his successful bicycle shop.

If David Buick’s life is unheralded, then Walter Marr’s is completely overshadowed. The two men were quite similar: both were fatherless, gifted mechanically, and temperamental. Marr was born in Lexington, MI in 1865. After his father died when he was six, Marr apprenticed and later worked in engineering firms in East Tawas and Saginaw. Marr began producing the Marr bicycle in 1896, and as that device grew in safety and popularity, Marr became more successful. Two years later he moved his company to Detroit. 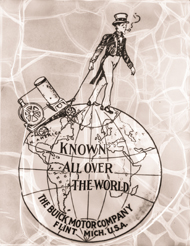 Marr would work through for Buick three times throughout the tumultuous history of the company: Buick needed his genius, but he resented his temper. Marr had already built two working automobiles – one car and one tricycle – before he first came to work for Buick, but in the earliest days of the mechanical age, engine design was neither straightforward nor well established.To the inventors who dreamed of automation, anything was possible, and ideas for engines at this time read like science fiction. Very few of the myriad fevered dreams of countless inventors ever came to fruition, but Marr overcame early troubles and built the first engine produced by Buick Auto-Vim and Power Company in 1900. It did not, contrary to expectation, power a car. The company’s first engine was made for a boat, and it was a great success.

Production of boat engines continued, but under David’s orders, Marr also began tinkering with automobiles. Lawrence Gustin, author of David Buick’s Marvelous Motor Car: The men and the automobile that launched General Motors, says of Marr and Buick, “both were enchanted with the horseless carriage.” Within a few months, the first Buick automobile came into existence, around 1901. At the same time, Marr quit for the first time, after an argument over engine troubles. David, nonplussed, placed an advertisement in the Detroit News, hired Eugene C. Richard shortly thereafter, and reorganized the business into Buick Manufacturing Company. Richard, a French engineer who had come to the U.S. in 1888 and moved to Detroit the following year, saw that David’s engine experiments were going nowhere. He began afresh, and in 1902, filed for a patent on an overhead-valve gasoline engine for Buick Manufacturing Company. This engine would literally give Buick the power to outdistance its competition, if the company could only keep afloat.

The Power Behind the Pistons

Credit for the “valve-in-head” engine is difficult to assign, and waffles between Buick, Richard and Marr, who was back at Buick Manufacturing for an even briefer stint around the time of the development of the overhead valve engine. In fact, Marr created his own line of cars that used the design before the famous Buick cars were produced; however, Marr was confounded when his manufacturer’s factory caught fire. Other cars, including the Franklin, made use of this design as well, although they also went under. Kevin Kirbitz, a Buick historian, says, “It’s almost impossible to credit just one person with the development of any particular feature… There was so much simple trial-and-error experimentation that led to true technological breakthrough that it’s hard to say exactly who did what and when.” Certainly Buick Manufacturing was not the first to develop a “valve-in-head,” but they were the first to successfully utilize the value of the design. Kirbitz takes this stance when he says, “The evidence would, however, support Buick as the first manufacturer to successfully integrate the elements of what is known today as the overhead-valve engine.”

The design of the valve-in-head engine was special because, as the name suggests, the air valves were located in the cylinder head above the pistons. This design made use of that space, resulting in less bulk and more accessibility; furthermore, the placement of both the inlet and exhaust valves allowed them to be operated by pushrods, resulting in more precise timing and a more efficient and powerful engine.

At first, neither Buick nor anyone else fully realized what a gem they had. The company’s first advertisements boast of ease of manufacture and service as the engine’s primary appeal, whereas the real value was its efficiency and power. Terry B. Dunham, a noted Buick historian and author of The Buick: A Complete History, says, “Buick, Richard, and Marr must have been very pleasantly surprised when they tested their first ohv engines and discovered the horsepower they developed. The full significance and importance of ohv was not realized until sometime later.”

With the design of the overhead-valve engine, it might seem as if David Buick’s troubles were over. Actually, they were just beginning. Buick was in debt to Benjamin Briscoe Jr., owner of a sheet metal business. Like many other companies, Briscoe’s was evolving: in addition to his traditional business interests, he was beginning to supply the necessities of automobile manufacture. Intrigued by his friend Buick’s ideas, Briscoe continued to lend him money, and eventually convinced him to take a deal: incorporate a new company with stock issued in Briscoe’s name. When David started making money, he could pay Benjamin back his debt and secure his ownership. David agreed, and on May 19, 1903, Buick Motor Company came into existence. Contemporaneously, Eugene Richard, who had been indispensable in the invention of the ohv engine, signed a two-year contract with Buick as inventor and designer. Everything seemed to be going well, but Briscoe began to have doubts. Other car builders were well ahead of Buick, and Briscoe was anxious to do business with them instead. Buick Motor was looking more and more like a money drain, so in the summer of 1903, when he heard that a company from Flint, called the Flint Wagon Works, was looking to buy an engine company, Briscoe was all ears. He visited the Flint Wagon Works and agreed to sell them the Buick car that same day. David Buick himself was almost part of the rest of the property that was sold to James H. Whiting of the Flint Wagon Works on September 3, 1903, and although he was not enthusiastic about the move from Detroit to Flint, he needed to pay Briscoe to avoid a takeover of his company.

Eugene C. Richard did not make the move to Flint with Buick and the 30 employees who relocated. Marr was also not among that number, yet. Both Richard and Marr would return to Buick, however: Marr in 1904 and Richard in 1908. In the meantime, Whiting went to work in the Vehicle City, erecting a shop on Kearsley St. in order to produce engines.

Left: David Dunbar Buick with Walter Marr, who would work for Buick three times throughout the company’s tumultuous and laborious rise to fame. Right:  James H. Whiting, president of the Flint Wagon Works, was responsible for bringing Buick Motor Company to Flint in 1903.