If you have been motoring around Flint this summer, you may have seen artists at work covering the city with beautiful, colorful murals. Their creations are brought to you courtesy of the Flint Public Art Project (FPAP) as they begin Phase 1 of their goal to paint 100 new murals in Flint by the end of summer 2020. The project is ahead of schedule and by the end of this summer, 50 awe-inspiring works of art will be finished. My City Magazine spoke with Flint Public Art Project executive director, Joe Schipani, who filled us in on art, the birth of the mural project and the upcoming First International Mural Festival.

MCM: What does the Mural Project represent?

JS: I feel it represents rebirth, happiness and healing.

MCM: How did the idea come about? Why murals?

JS: Over the fall and winter, the new local FPAP board worked to restructure the organization. We went out to the community to develop a public arts program that responded to local needs and one thing became clear: locals felt revitalization efforts were being over-shadowed by stories and images of the water crisis, blight, hardship and ruin. The media attention has blurred out the nice parts of the city we all love. After several discussions, our board came up with an idea to use big, colorful art projects to draw attention to the parts of Flint we are proud of. After a few more discussions, we designed a plan to install new murals all over the city – 50 a year for two years. We hope to shift the narrative around Flint away from the water crisis and transform our city into an international leader in the public arts.

With our partners COlabs, Kobra Paint and Gallery on the Go, we are already ahead of schedule with 25 murals being completed by the beginning of July. All of this work is supported by grants from Genesee Share Art, Community Foundation of Greater Flint, Greater Flint Arts Council, Michigan Council of Art and Cultural Affairs, UM-Flint (Flint Truth and Action Partnership Project), Kellogg Foundation and Walmart.

MCM: Tell us about the First International Mural Festival.

JS: As part of our campaign to change the image of Flint to a city of creative hope, FPAP will host the city’s first Mural Festival this year on October 12. Over the last five years, we have hosted the Free City Art Festival, which centers on empowering artists. The Mural Festival will be an extension of that. It will take place along Saginaw Street, from I-69 to Hemphill Road. Mural artists from around the world will compete to participate in this festival. Featured artists will include locals Kevin “Scraps” Burdick, Charlie Boike and Pauly Everett. I am excited to announce the return of internationally known artists Emily Ding and Seba Cener and can confirm that Samo and Nomad Clan will participate. We are committed to diversifying the urban landscape and highlighting the unique voices of our community. 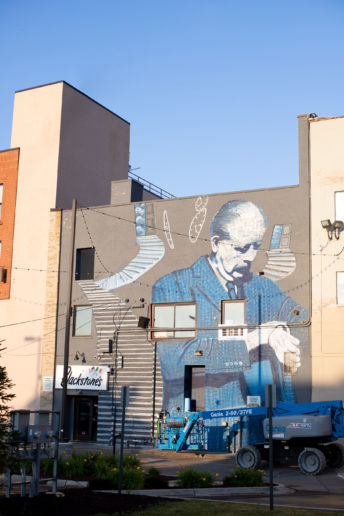 “The mural is titled, ‘Escaping Time’. The original Blackstone’s was a men’s clothing store. The older man is representative of a customer of the former business, but I also painted him as a reflection of the businessman’s constant quest for time. The surreal staircases leading up to windows are his potential escapes from his constraints. I feel that people forget to live and we all need to set aside some time for ourselves. We need to escape.”

“The people in Flint are so kind, sweet and accepting of art. I feel like I have found forever friends. Flint Public Art Project is setting the example of how to do it right.”
Erica Arndts 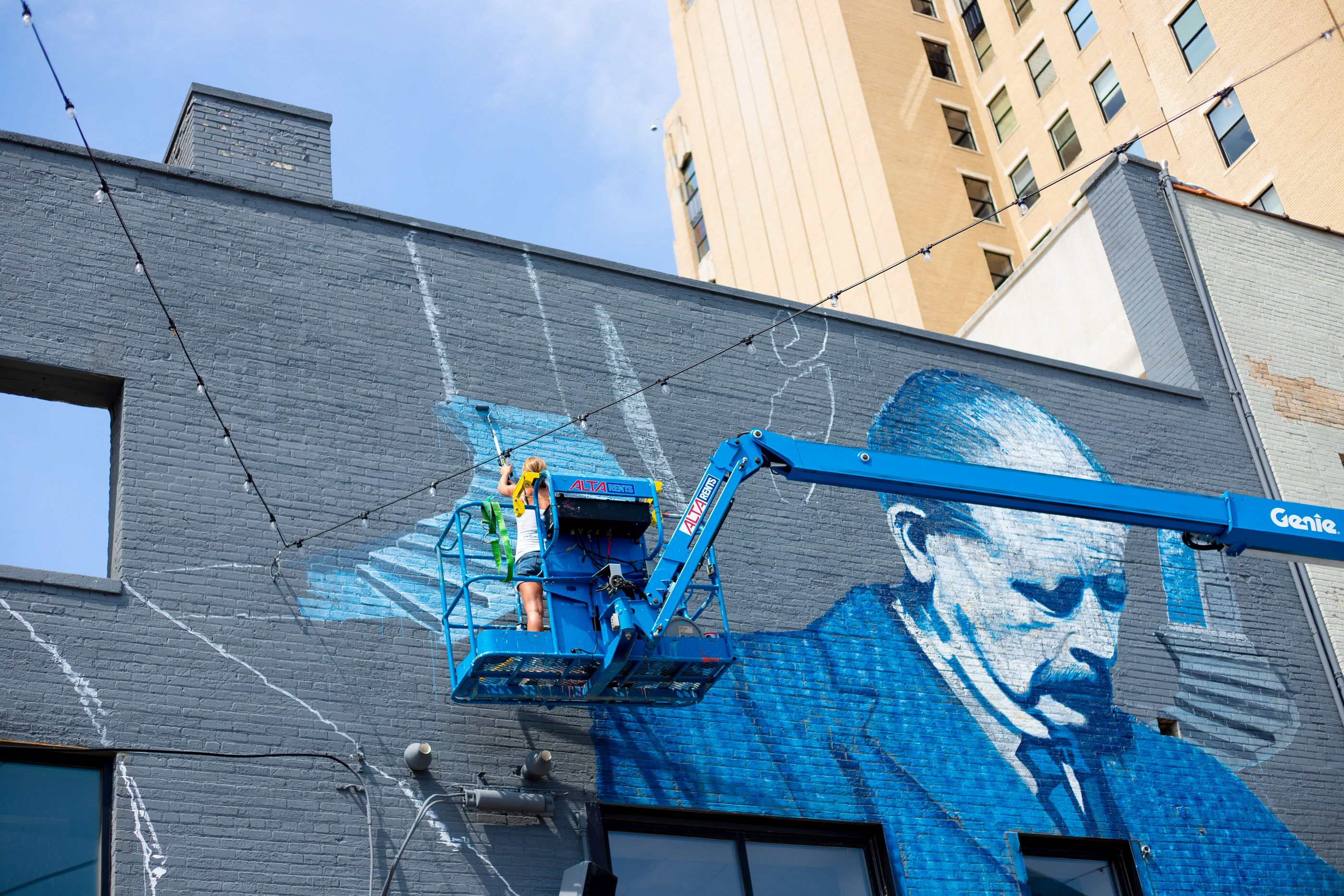 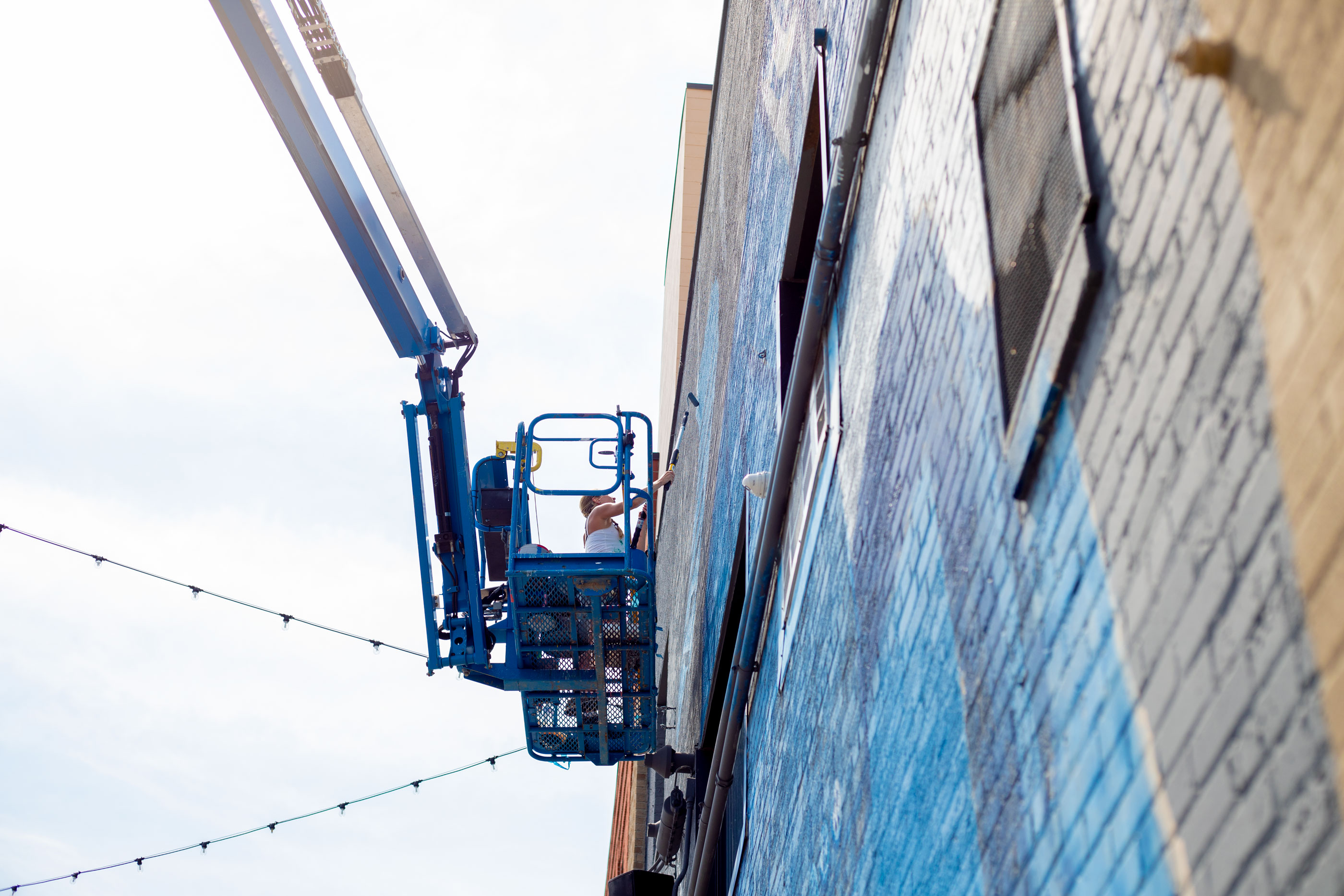 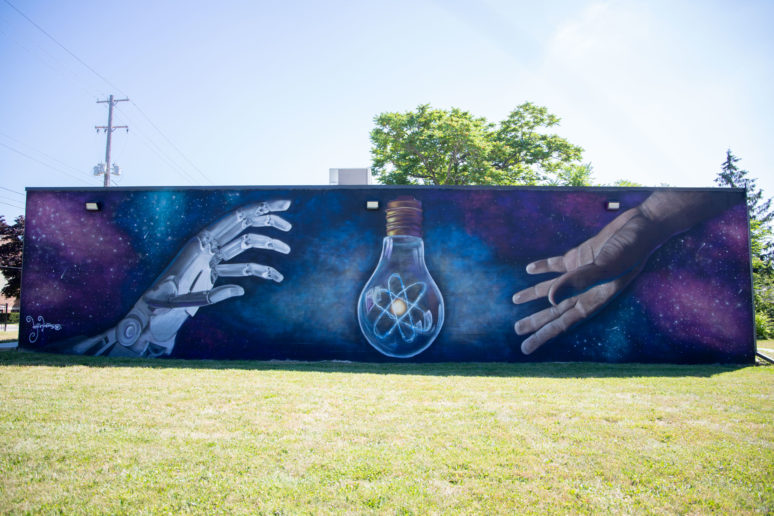 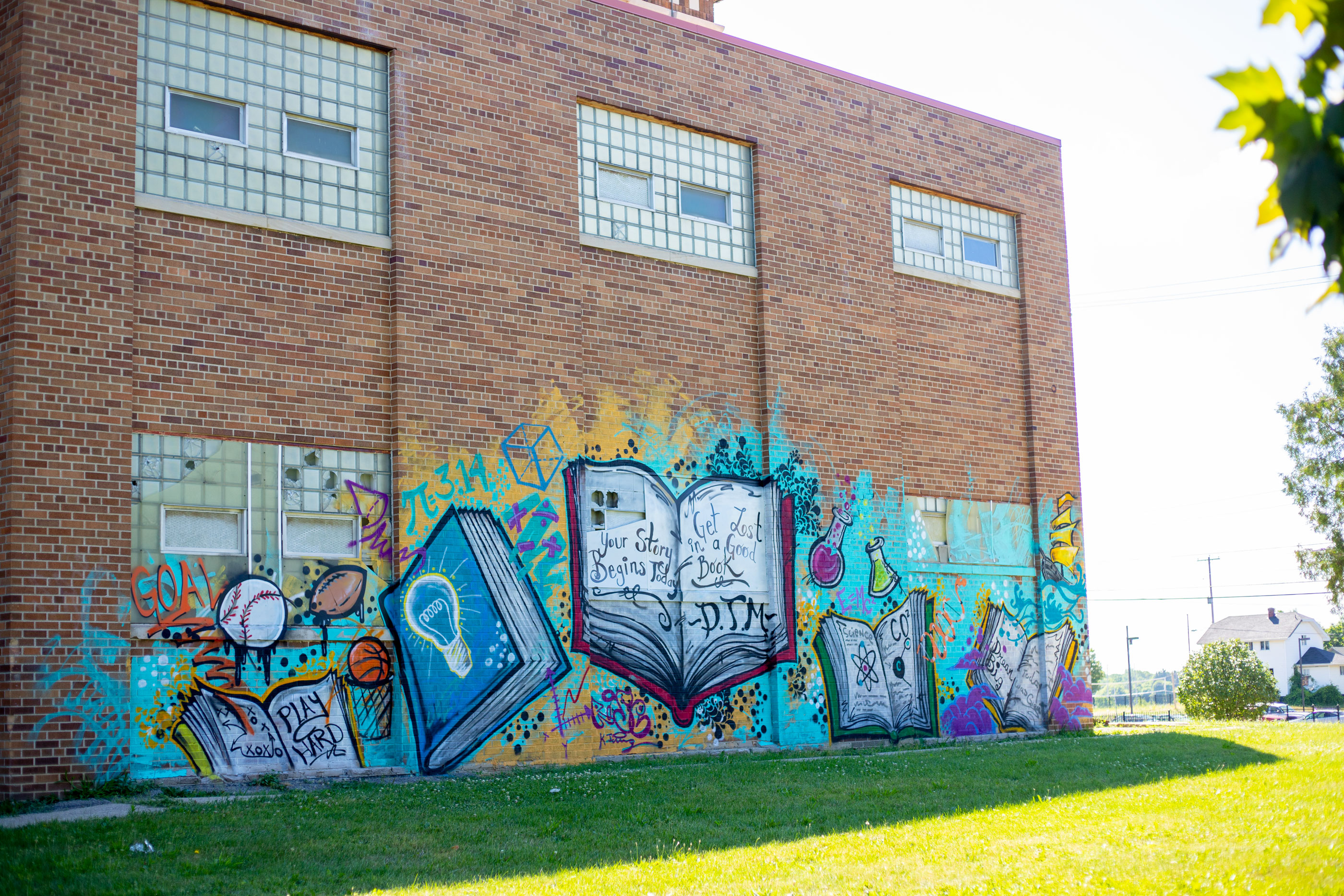 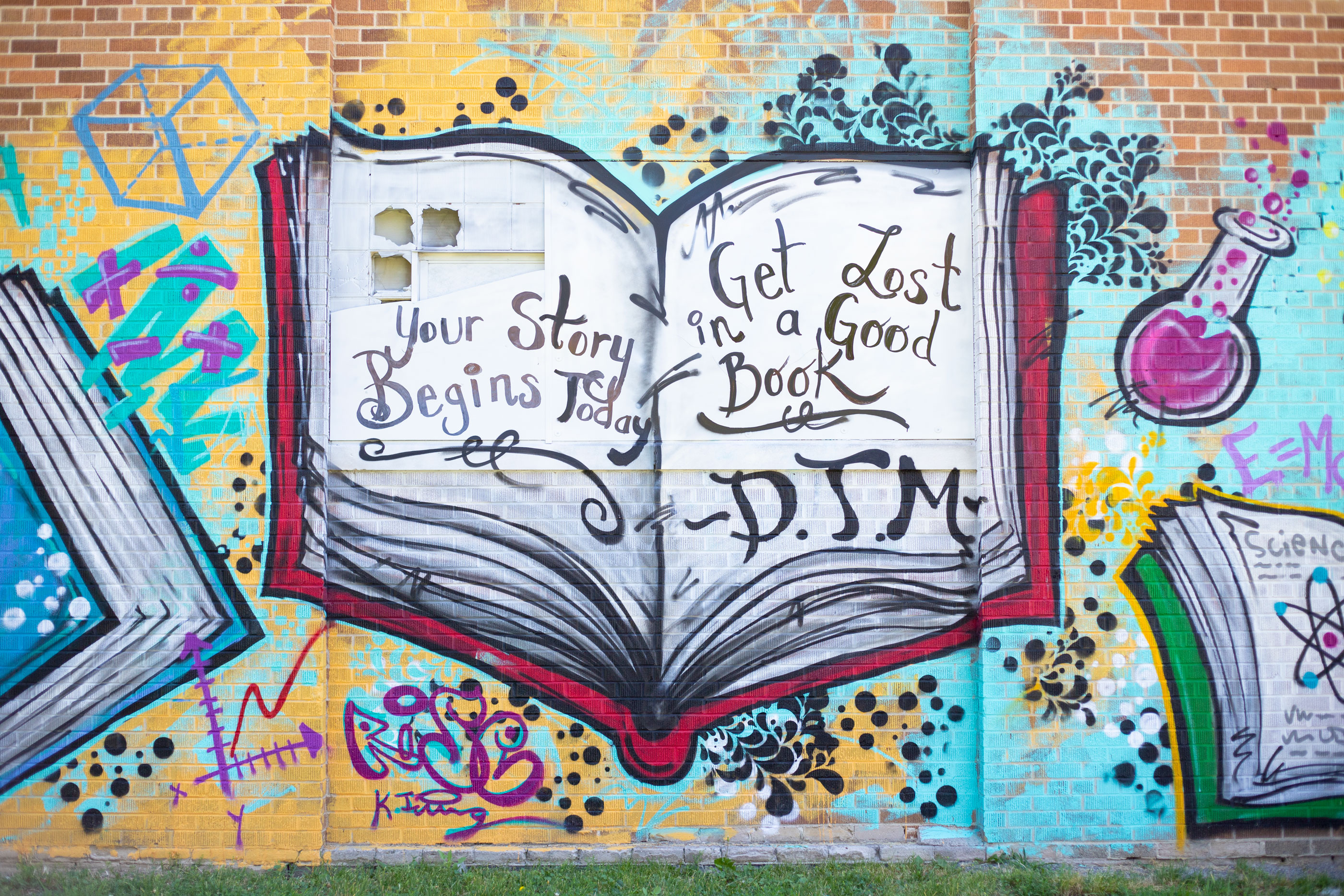 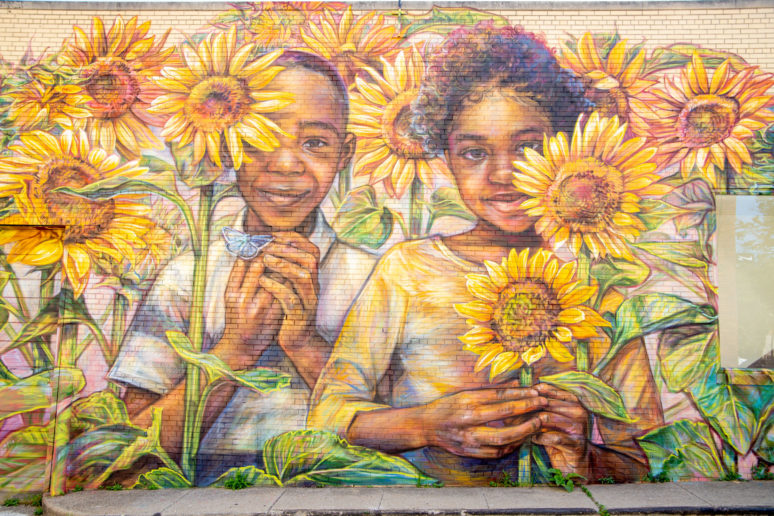 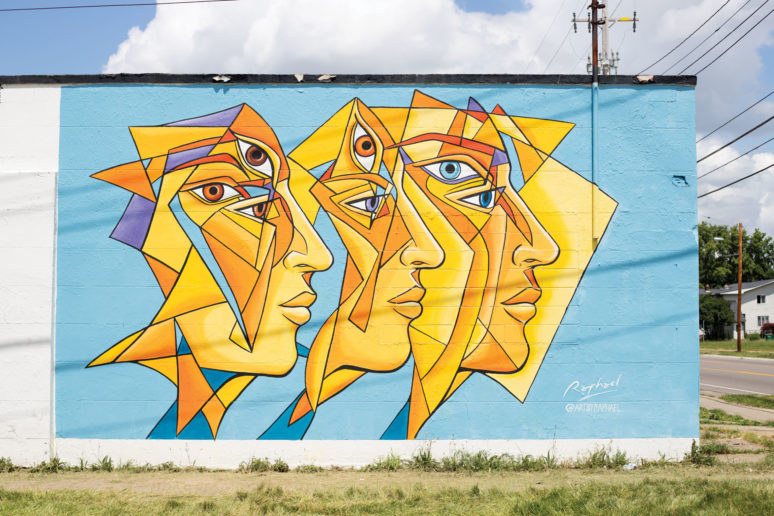 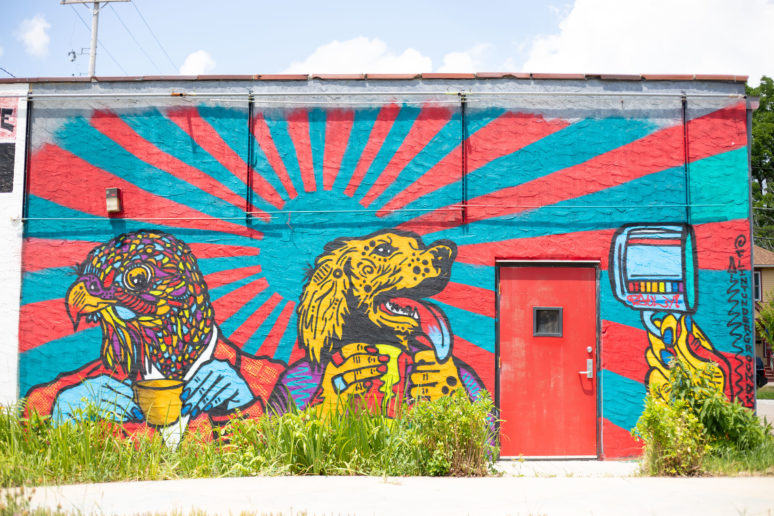 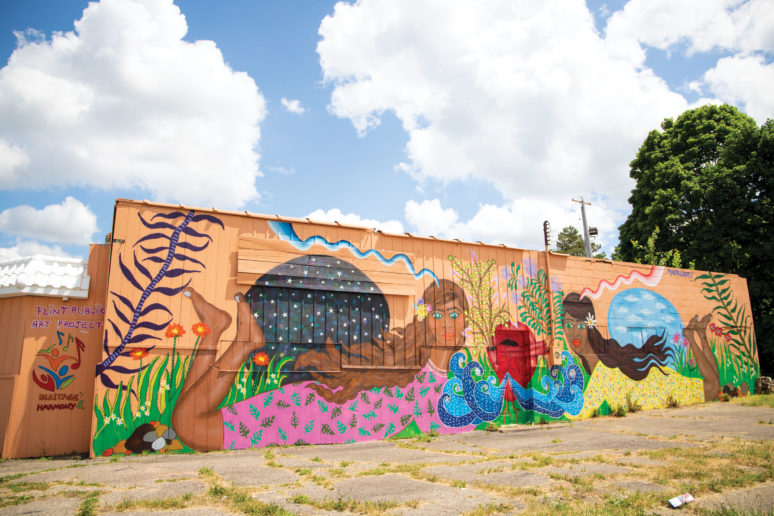 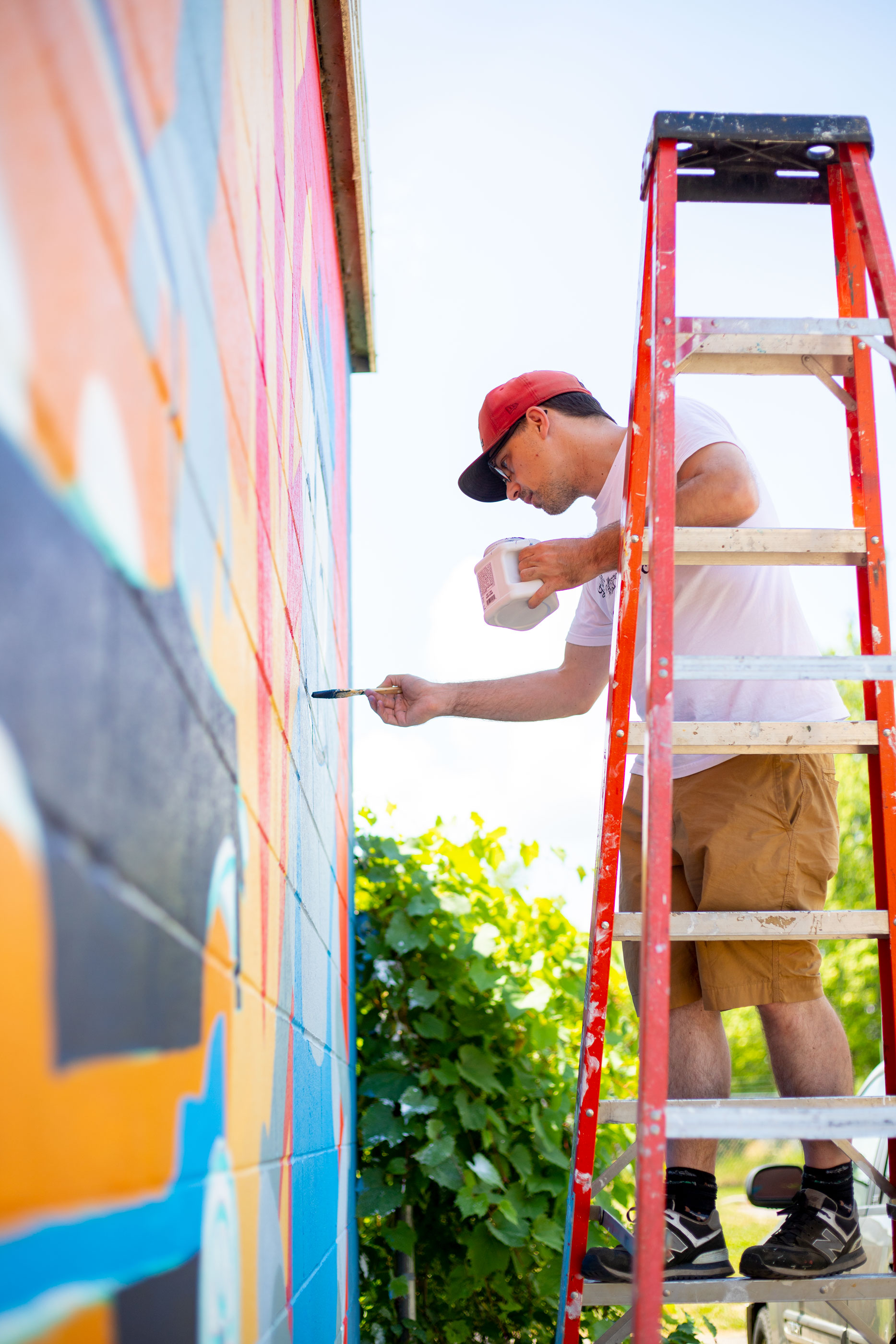 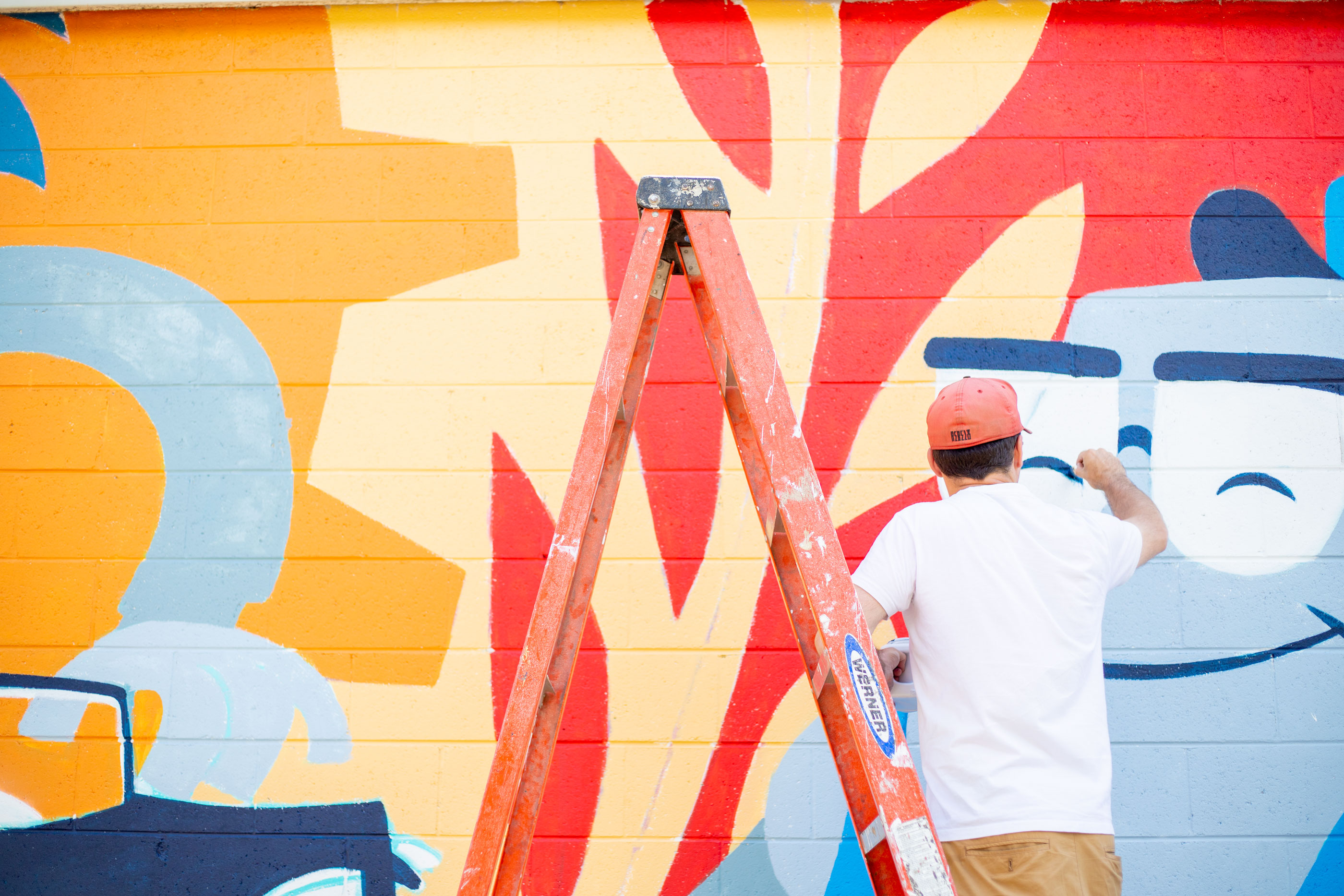 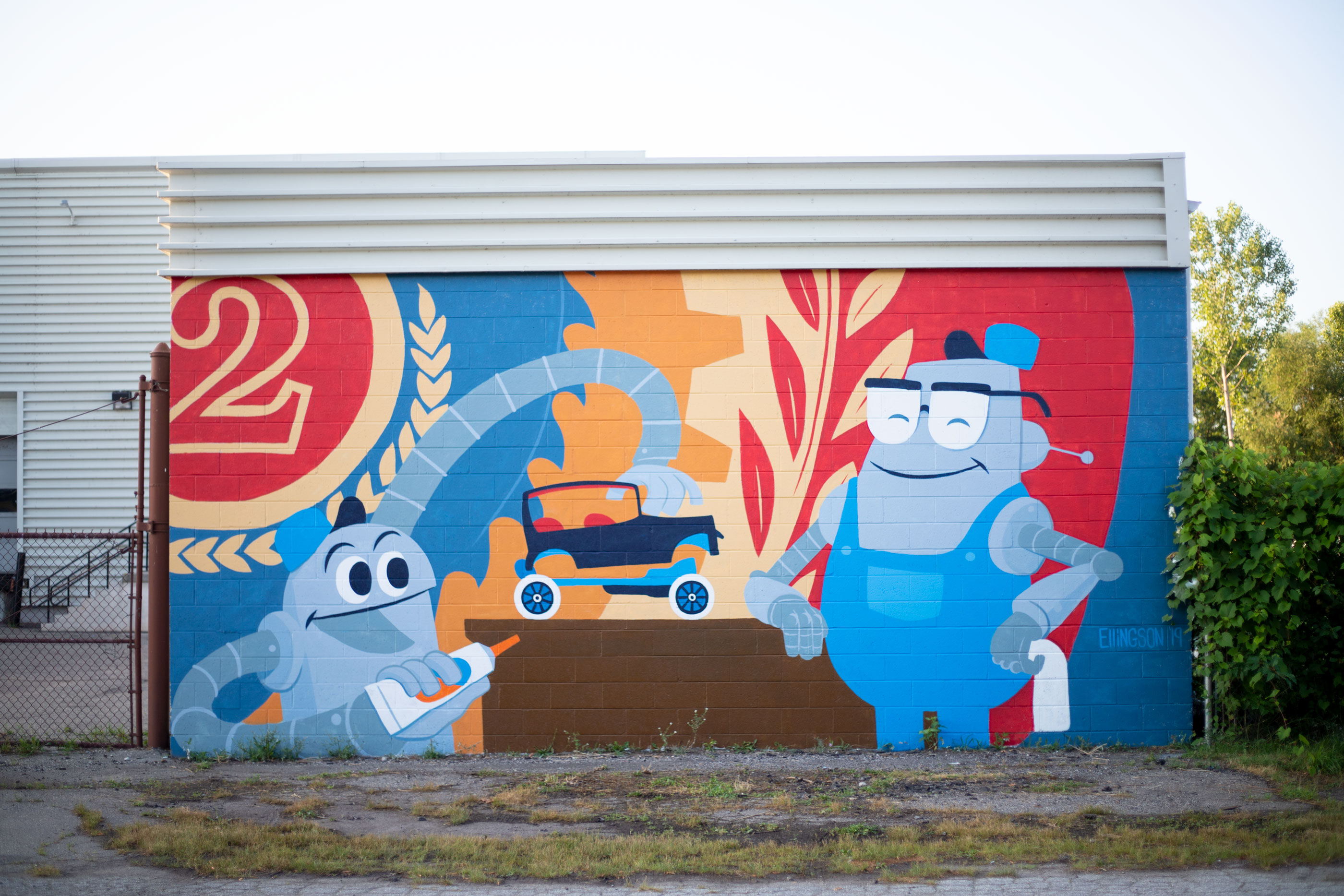 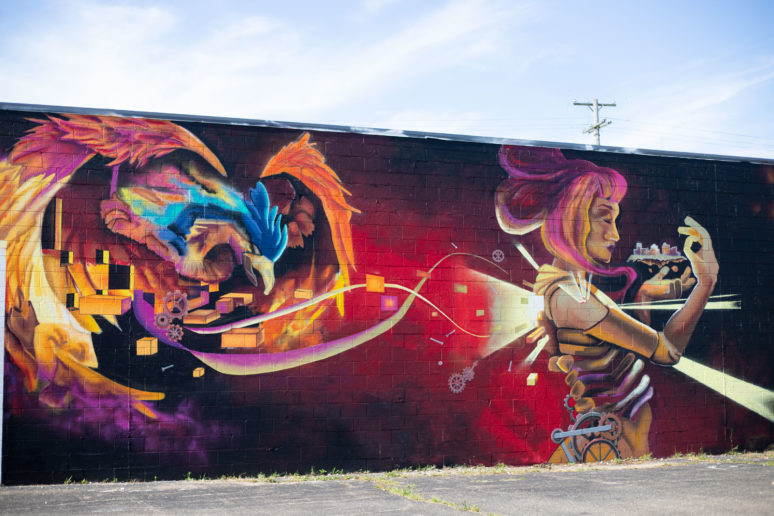 “The biomechanical robot is cradling the city of Flint, while the phoenix represents the spirit of the city, constantly reviving into something new and beautiful. I wanted to show the resolve of Flint and the care the residents have for it. This experience has been absolutely awesome for someone like me, being around all of the talented artists and showcasing my skill.”

“I really would like to thank the Flint Public Art Project for doing this. It’s a great thing for the city.”
Zach Curtis 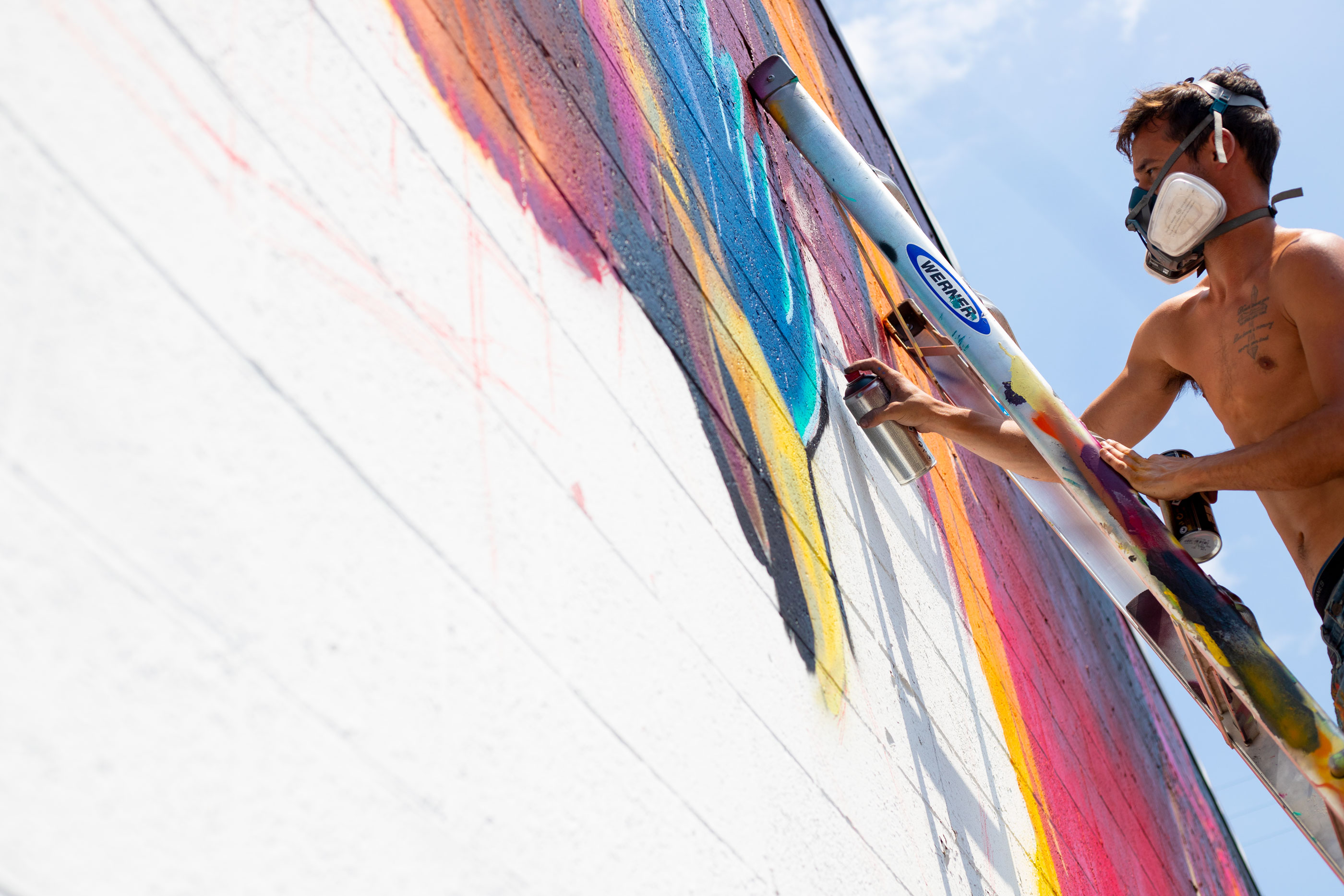 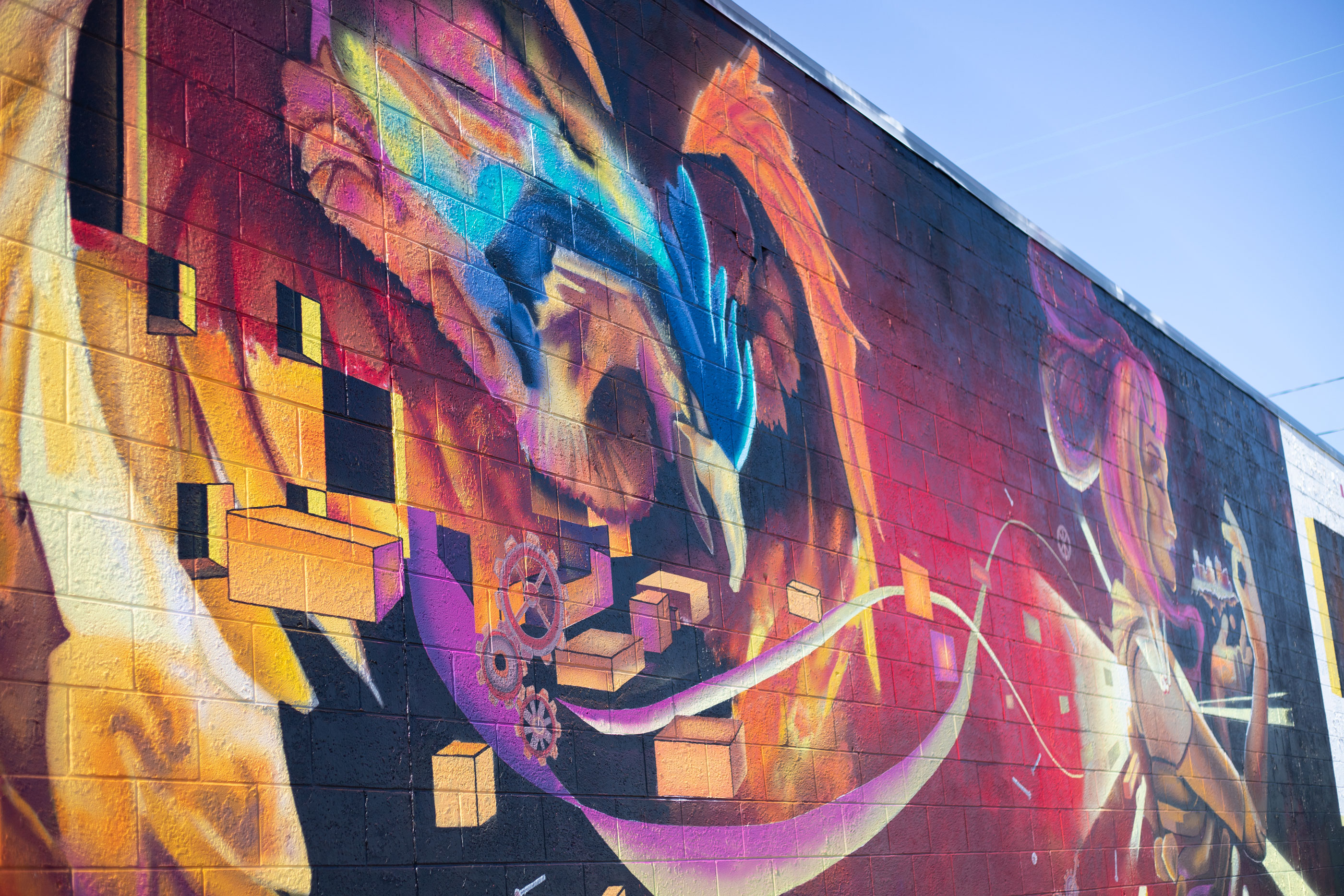 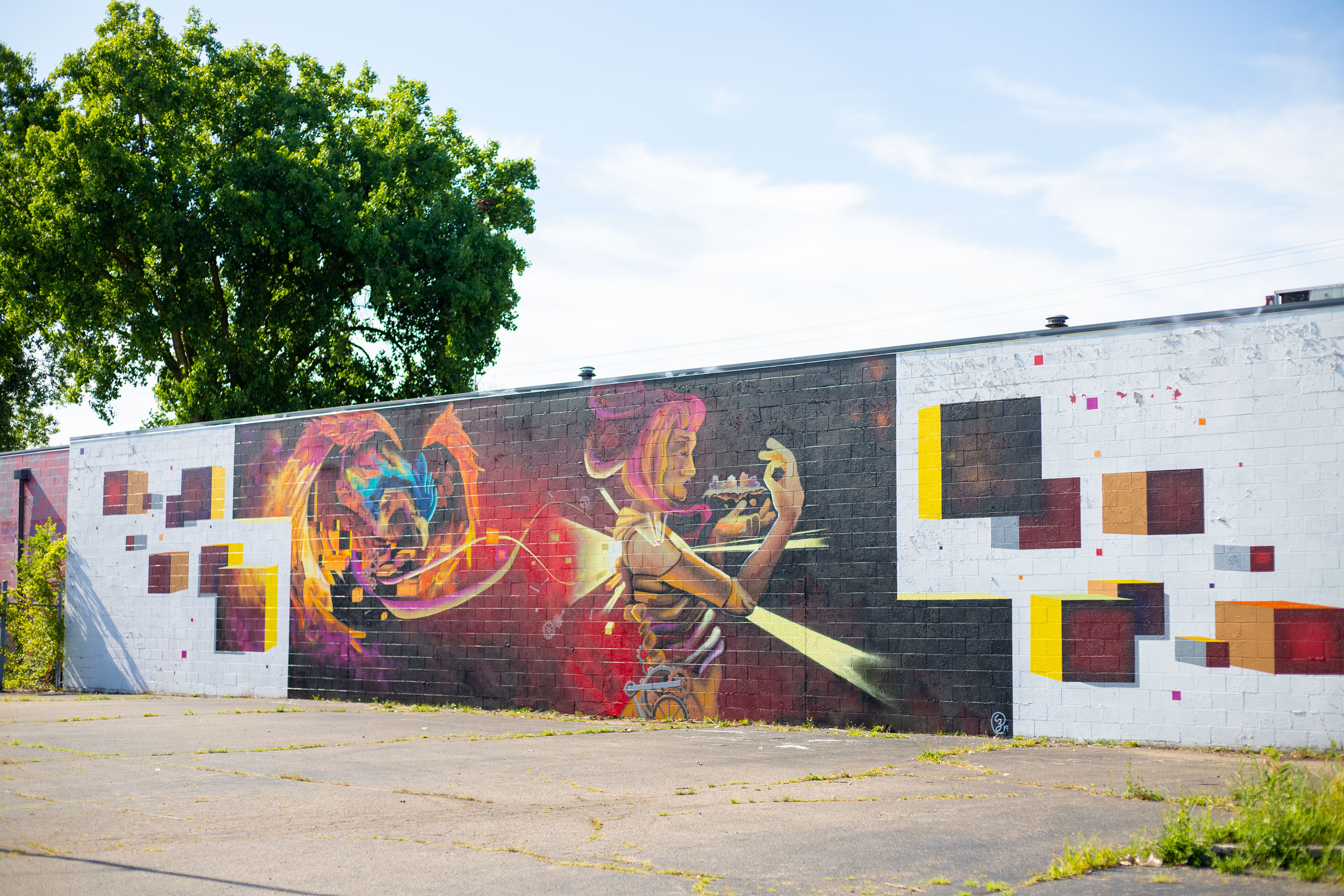 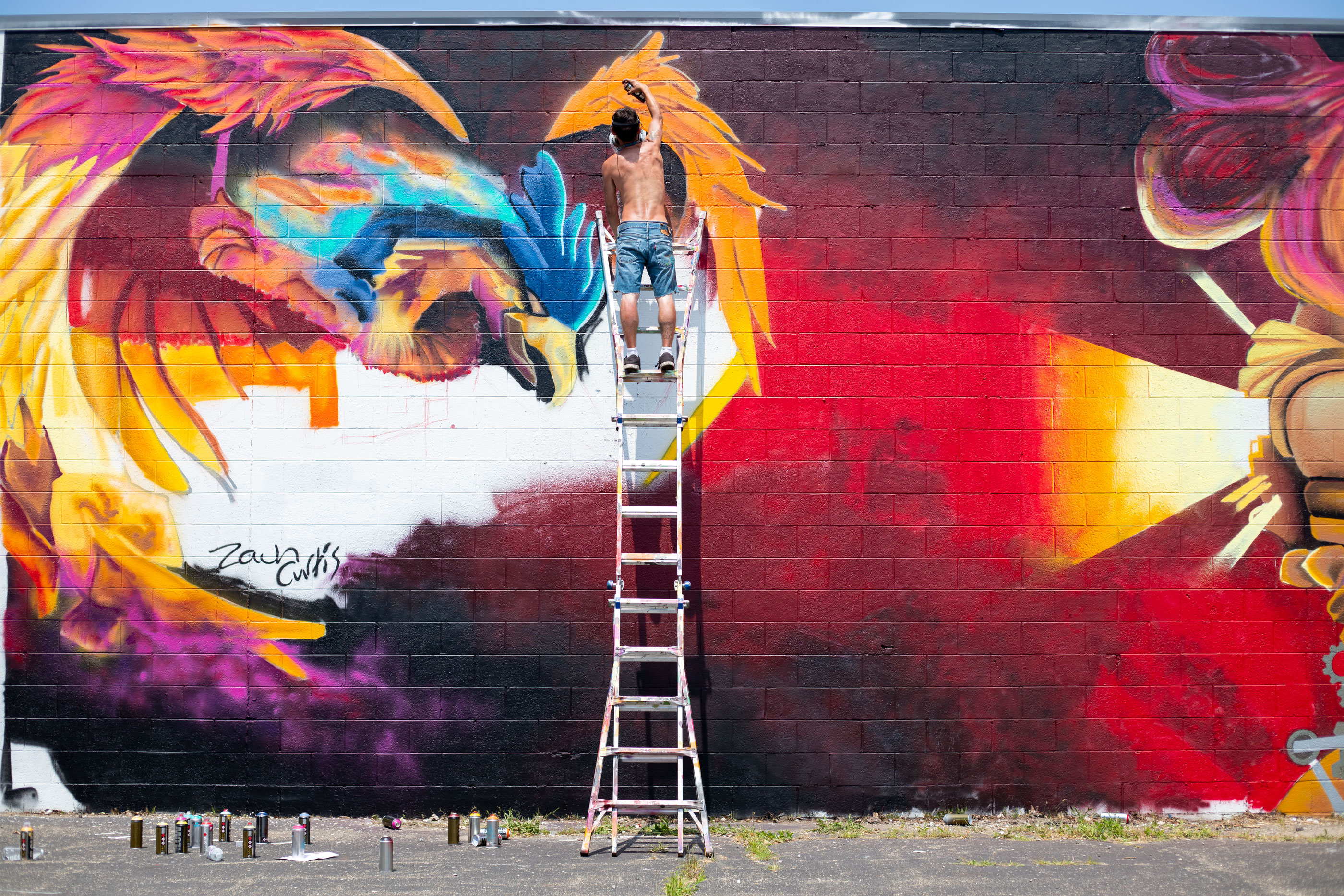 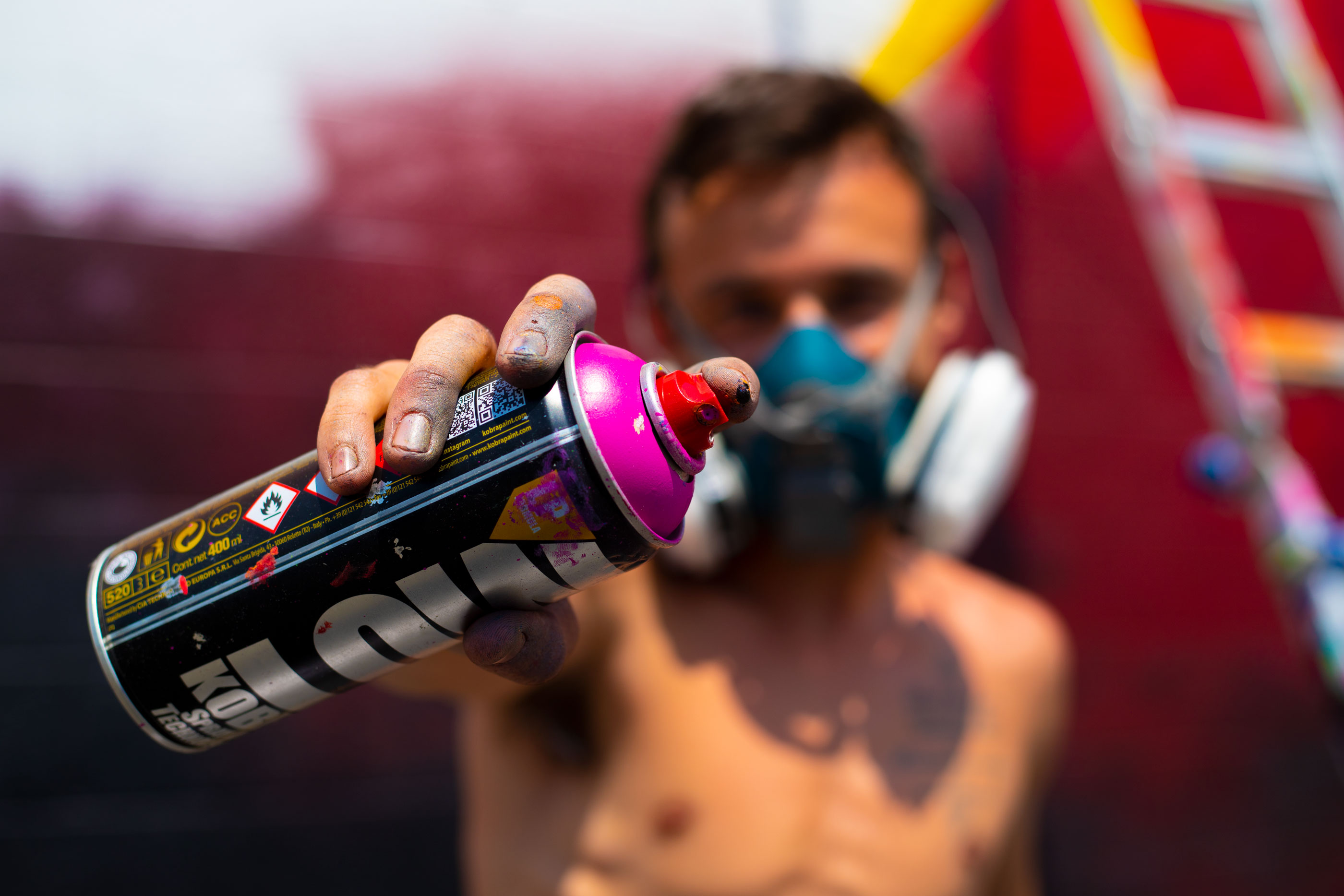 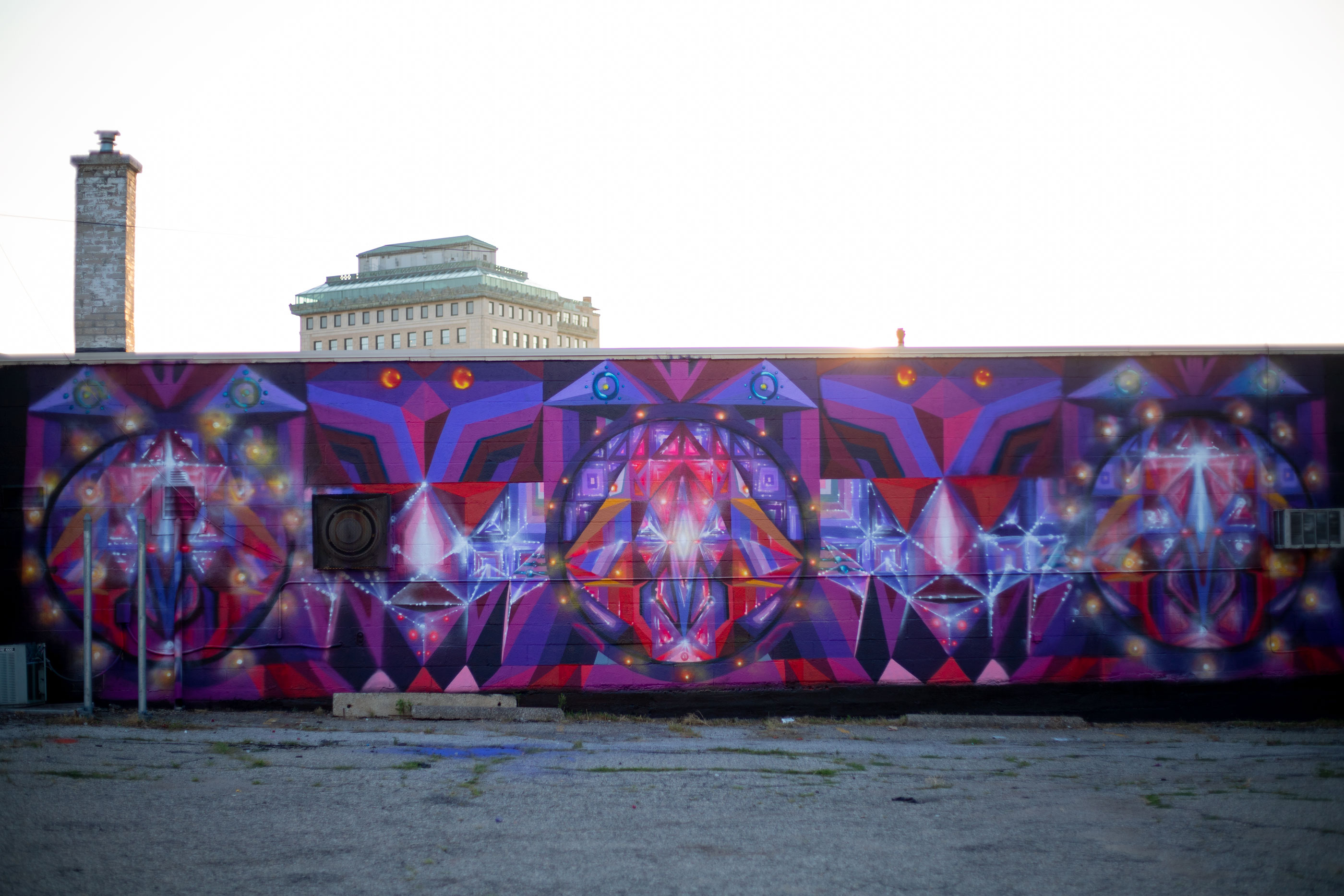 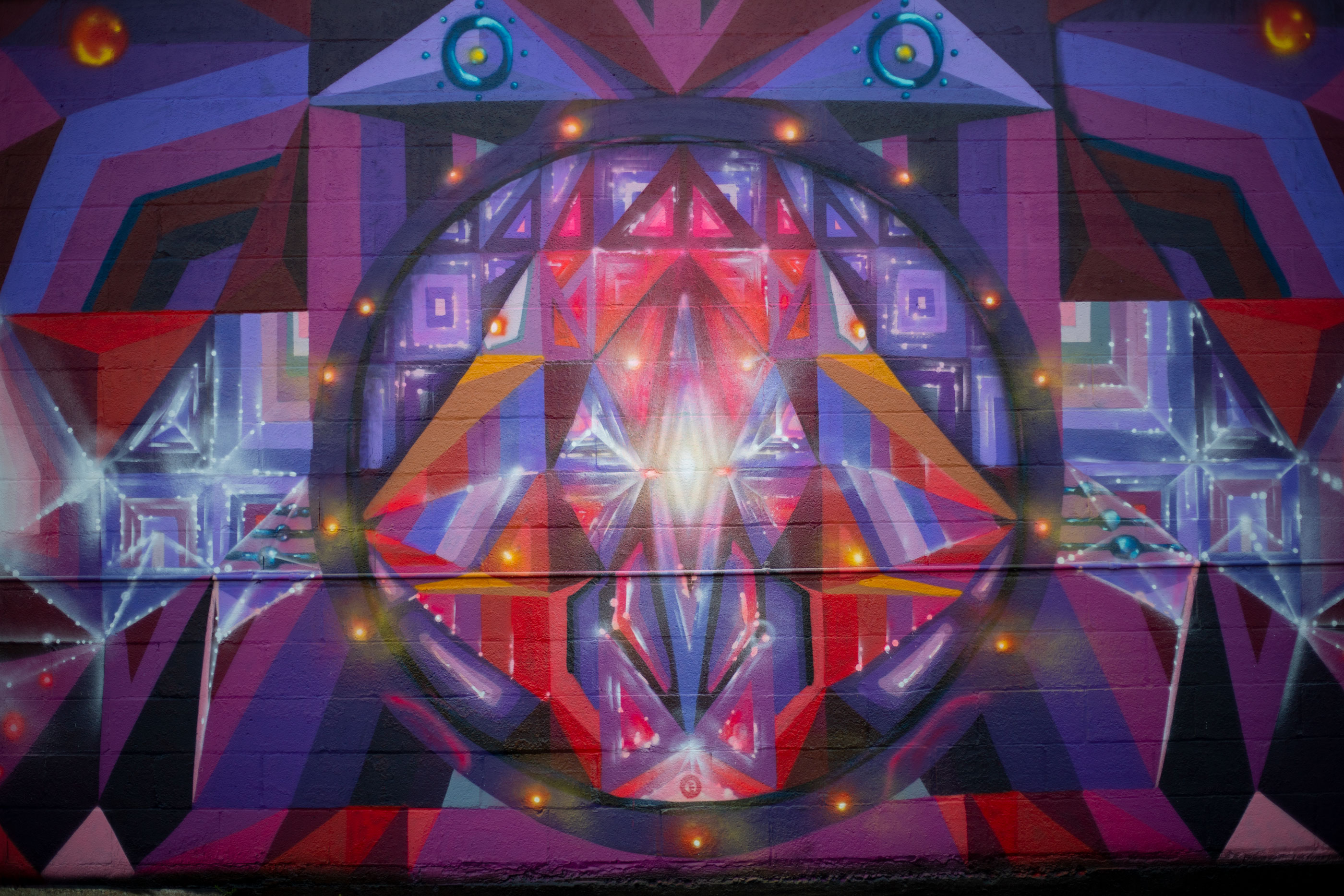 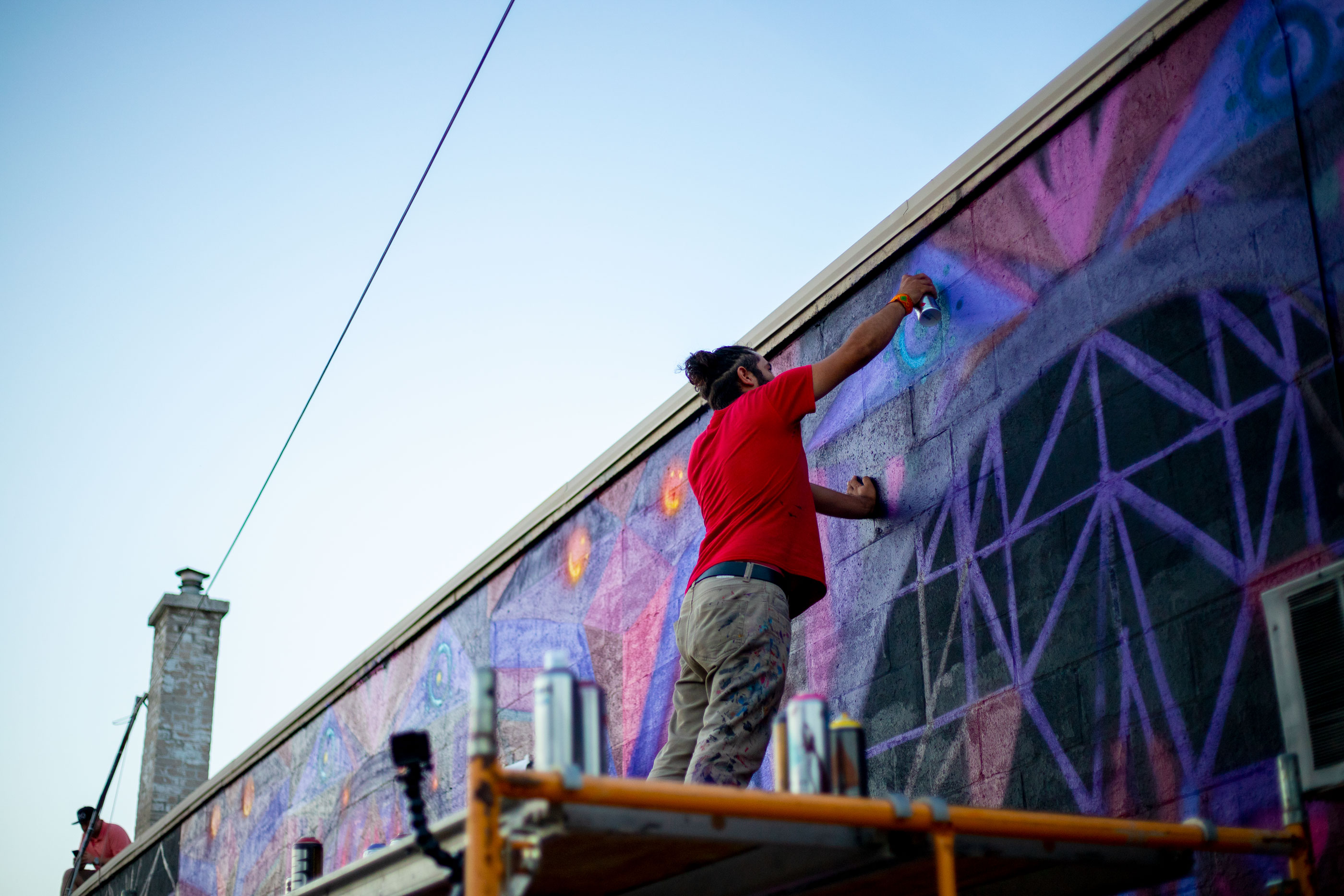 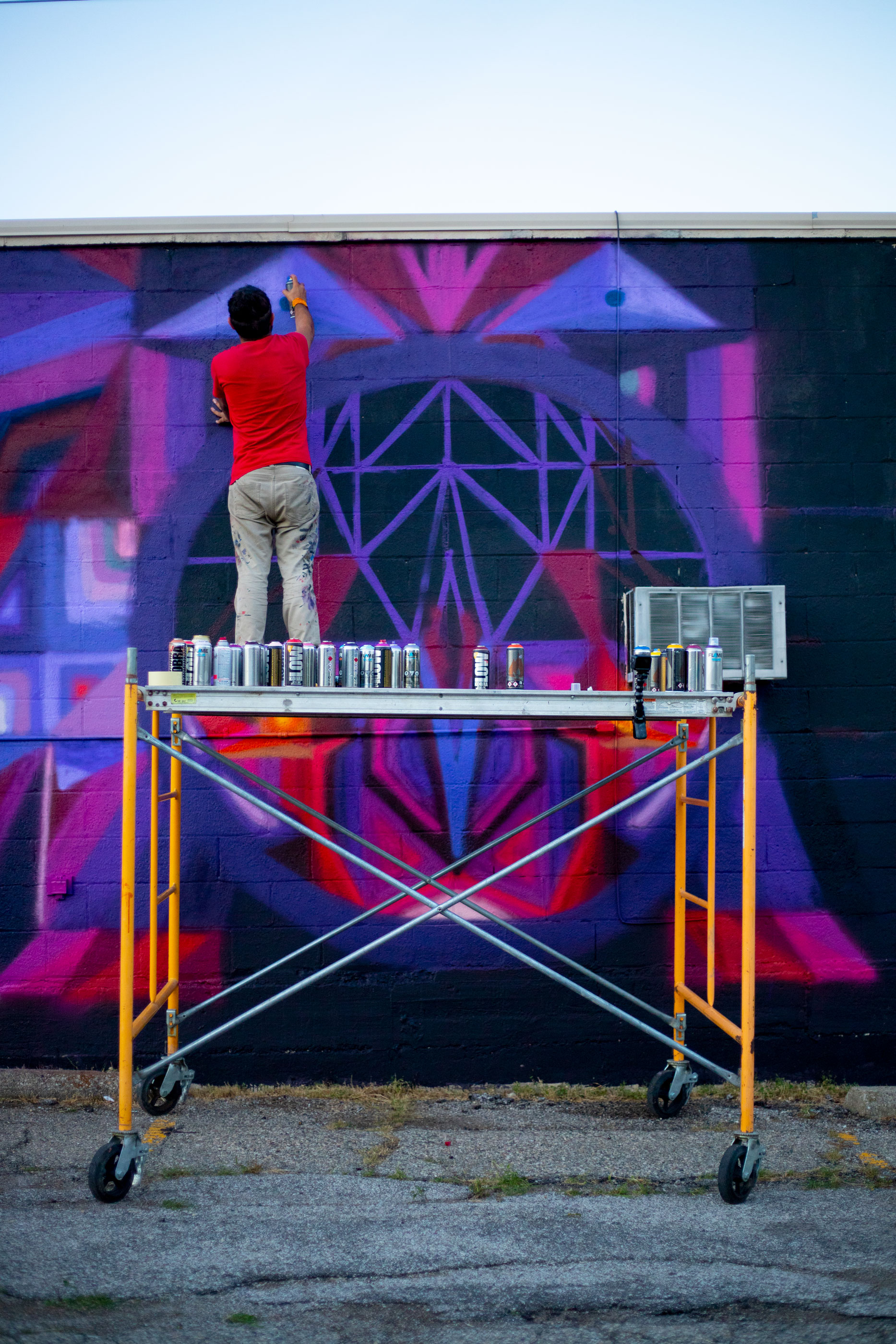 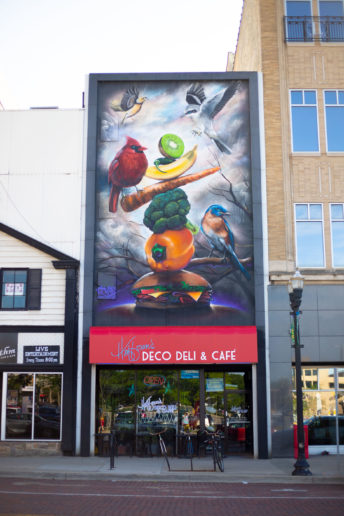 “I put a lot of birds in my murals – it’s my signature, in a way. For the Hoffman’s mural, I wanted to replicate the zen experience of ‘stacking stones,’ only I did it with vegetables and fruit. It reflects the business and personal emotion.”

“Flint truly lets the artist create on a personal level. It’s fun and it is one of the biggest things attracting artists to the city.”
Kevin Burdick