In May of 2018, G.H.O.S.T. (Genesee Human Oppression Strike Team) was initiated by Genesee County Sheriff Christopher Swanson (when he was undersheriff) with authority granted by then-Sheriff Robert Pickell. Swanson had been involved with a West Coast international organization that supports enforcement of human trafficking laws and the rescue of sex trafficking victims through the use of special forces. A year prior, he took a trip to Haiti where he worked with an intel-gathering group. Some women from Europe had been promised employment at a five-star resort in the Dominican Republic and instead, their passports were taken from them, they were put on a bus and shipped to Haiti where they were trafficked for sex 24 hours-a-day.

During that mission, Swanson worked with a group of undercover operators with law enforcement and military experience, who posed as “customers.” The traffickers brought the victims to the customers, the victims were rescued and the traffickers were then arrested by the national police.

After that successful operation, Swanson thought to himself, “If this is happening here, and it is the fastest growing criminal enterprise, I have to believe it’s also happening in Genesee County.” This led to the formation of the G.H.O.S.T. task force within the Genesee County Sheriff’s Office, whose purpose is to apprehend human traffickers and people who attempt to have a sexual relationship with a child.

According to Swanson, the first rescue in Genesee County happened in May 2018 without additional funding or additional people. “We added this to our normal duties,” he explained. Potential victims were identified through contacts with Probate Court, DHHS, and by using a list of kids who were age 17 and had no known address or location. “These kids are the members of the population who are most vulnerable to trafficking,” Swanson states. There were 72 names on the list. “We found and identified 50 of the kids on that list.”

Not all of those kids had been trafficked, the sheriff explained; but their final stop was a house off Fenton Road that led to the discovery of a 15-year-old girl who had been locked up, living in a bathtub and covered in bruises and cuts, who was being pimped out. “That was the real deal.” Swanson said. “That was the wakeup call for my team.”

Since that first rescue in 2018, over 149 predators have been arrested. Swanson has also taken G.H.O.S.T. members to 35 Michigan counties so that other sheriffs could learn how to form their own strike teams. And, according to the sheriff, human trafficking is mobile. “It moves from town to town,” he says. In Michigan, any person under the age of 17 who is involved in commercial sex is, by definition, a victim of human trafficking. 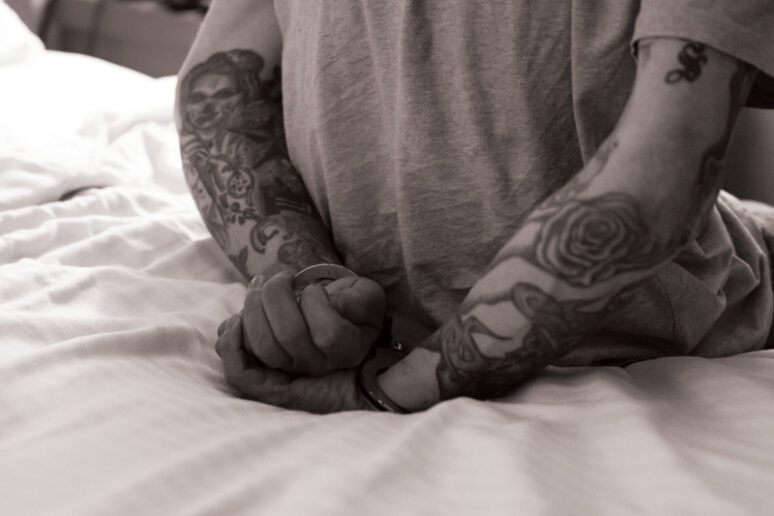 “It’s a huge business but together, we can fight it. This is my personal call to action.”
Sheriff Christopher Swanson

Education, awareness and aftercare are important aspects of human trafficking, the sheriff states. The sheriff’s office uses partners in Genesee County including Voices For Children and Whaley Children’s Center for promoting education and awareness. “We have several aftercare partners that help victims who have been rescued get the physical, emotional, spiritual and psychological rehabilitation they need.”

Of the trafficking cases that have been prosecuted, Swanson is happy to report an impressive conviction rate. “That is because of the expertise and professionalism of G.H.O.S.T. and the team members who work to make it happen – who put cases together in cooperation with the prosecutor who has been battle-tested,” he says.

As January is National Human Trafficking Awareness Month, Swanson says part of their messaging is to get the community, experts, moms and dads, grandmas and grandpas, churches, teachers and friends all involved in helping the fight against human trafficking. “Clearly, they can’t be involved in the law enforcement aspect, but they can be part of the team,” he adds. The task force has started a program that parallels the G.H.O.S.T. team called the G.H.O.S.T. Certified Program, which will be launched at the G.H.O.S.T. open house event taking place from 4-6pm on January 26. Attendees will have the opportunity to meet G.H.O.S.T. team members and also to be recognized as a Certified G.H.O.S.T. member.

Anyone who wants to become a Certified G.H.O.S.T. member can complete an online tutorial which includes a short examination. Those who pass the exam are allowed to provide a safe place for someone to go who needs help or has questions about human trafficking. Once a person or organization is certified, they will receive a signed certificate and a large sticker (to be used for identification) from Sheriff Swanson.

Swanson reiterates the fact that human trafficking is the fastest growing criminal enterprise in the world. With just one victim, a trafficker can gross $200,000-$250,000 per year, he reports. “It’s a huge business,” he states. “Together, we can fight it. This is my personal call to action.”