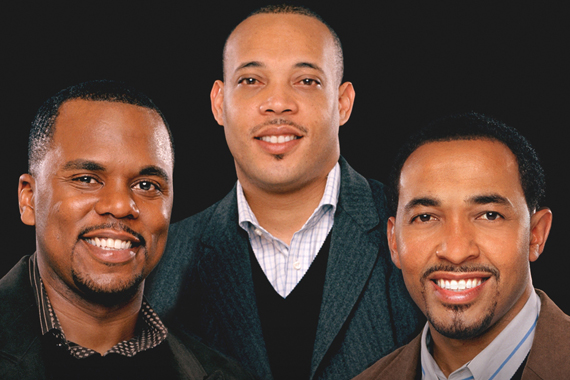 Many of the challenges that face Flint youth are the same types of challenges that doctors Sampson Davis, Rameck Hunt, and George Jenkins overcame growing up in Newark, New Jersey. Even the environments of the two cities are reportedly similar. When the three authors of the New York Times bestseller The Pact visited Flint Northwestern on May 31, Dr. Davis opened by saying that many of the unkempt places he saw in Flint reminded him of scenes from his hometown.

“I looked around and saw some of the same types of places from back home, like the street corners and the buildings. There are many similarities between Flint and Newark.”

Indeed the scarring of de-industrialization shows on inner-city landmarks and reveals itself in disheartening statistics; but these signs are not absolutes that govern the outcomes of inner-city youth. Upon graduating from high school, the doctors defied the odds of their underprivileged upbringings and troubled teen years by making a pact to support each other through college and medical school at all cost. Simply put, their pact worked.

David McGhee, Leadership Development instructor at Mott Community College, worked tirelessly to bring the doctors and their message to Flint. He believed that the doctors had a message especially pertinent to Flint students. “We had been trying to get the doctors here for three or four years, and now is just the time when the stars were able to align and make it happen,” McGhee said.

The doctors travel often, spreading the word to students nationwide about the importance of education and the blessings of a great support group. Their most recent tour included stops in Atlanta, Washington D.C., and Chicago before visiting Flint. Dr. Davis explained to My City Magazine what motivates the trio to travel and spread their message. “The students remind us of where we came from, and we consider it our responsibility to show them that they can make it, as well.”

McGhee had a very poignant message to share with My City Magazine concerning the doctors’ visit. “I think it is imperative for [the doctors]to be able to instill a message not only of hope, but also of persistence. By being persistent, these men were able to achieve their goals and maintain their relationships with each other.”

My City Magazine encourages Flint youth to follow the example of the doctors and of local students who overcome great odds to achieve great things.