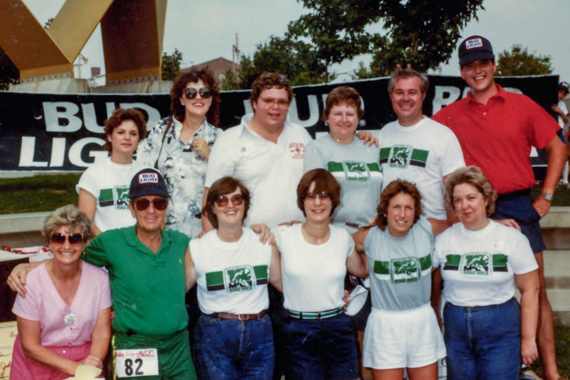 The idea for the Bobby Crim Road Race was “cooked up” 37 years ago at Lois Craig’s kitchen table. Lois, a Flint native who would become the founding race director, was administrative assistant to Bobby Crim when he was Michigan’s Speaker of the House of Representatives. Lois was responsible for scheduling the Speaker’s events, and when Bobby received an invitation to attend the Area 13 Summer Special Olympic Games in Genesee and present ribbons to the winners, she thought it might be of interest to him. “Bobby always loved running,” Lois said, although she admits that she was worried that Bobby would not be pleased with event’s all-day schedule. Her fear was unfounded; when he got back, he was fired up about the Special Olympics. “He fell in love with the whole program,” Lois remembers.

At that time, the Special Olympics—which were started in 1968 in Chicago by President John F. Kennedy’s sister, Eunice Shriver—was in desperate need of funding, and Bobby wanted to help. This is when the idea for the road race was born. Lois lived in Flint, worked in Lansing and was raising three children at the time, so if she was to spearhead the effort, the race would have to take place in Flint. She met with Flint’s City Mayor, James Rutherford. “So you want me to block off every Flint city street on a Saturday?” he exclaimed. Shaking his head, he said, “Oh, people will be calling.” But he agreed, as long as the race ended in Downtown Flint to help support the merchants.

There were 707 runners in the first Bobby Crim Road race. “We did everything wrong that first year,” Lois laughed, remembering back to 1976. The only available date for the race was the fourth Saturday in August, and when the committee was unable to get TV coverage until noon, they voted to change the race time. “I voted no,” said Lois, who worried about participants running during the hottest hours of an August day. And indeed, Lois remembers that there were not enough water stations available nor was there a plan in place for medical emergencies. But they learned a lot that year, she said, and the event raised $30,170 for Special Olympics.

The race was supposed to be a one-time event. “But Bobby was quite the pusher and he kept raising the bar,” Lois said, smiling. His goal was to raise $40,000-$50,000 the second year, and once that goal was reached, the vision became grander still. Each year, they raised a little more and the race got bigger and better. By the third year, 34,000 runners from all over the world participated, making the Crim an international road race. Even Bill Rodgers—aka Boston Bill—ran in the Crim. “He has influenced more people in the U.S. than any runner, getting people out and running,” said Lois. By 1993, the road race had raised a total of $1.3 million for Special Olympics. Over time, the focus of the Crim has evolved, and today it is a nonprofit organization focused on healthy living.

Throughout the years, the planning team continued to meet at Lois’ home. “I called them my Kitchen Cabinet,” she chuckled, remembering how this group of 14 volunteers worked at her kitchen or dining room table. After serving as the race director for 17 years, Lois retired at the age of 65. “That lasted two weeks,” she laughed. “I got very bored.” So, Lois returned to work, this time with the Special Olympics. She is now in her 17th year of working with Area 13 Special Olympics, continuing to help the organization raise funds. But now, free from the responsibilities of the race director, she has time to watch the Crim. “Now I can watch the whole thing, and I never miss it,” she said. “I get to cheer on the runners; I have a lot of friends out there after all these years.”

Lois’ contribution to the Crim has been immortalized. On the Friday before the big race, The Lois Craig Invitational Special Olympics Race is held. Approximately 90-100 Special Olympians run in different heats that align with their individual ability to participate. Numerous fans watch this race, thanks to a program Lois started with the help of Brian Barkey about four years ago, which she says has helped the Crim return to its roots: benefitting Special Olympics. Crim training teams vote to adopt a Special Olympian and the runners get pledges for Special Olympics. “The race is now wall-to-wall people!” exclaimed Lois, as all the Crim runners come out to support the Special Olympian they’ve adopted and are running for. The teams raised $8,100 last year for Special Olympics and have already raised more than that this year.

Lois will be 85 years old in February of next year and is finally thinking about retiring, for good this time; but says that it’s hard for her to leave her special kids. “They really hook you,” she says. “You watch those kids and their passion and think, wow. If they don’t steal your heart, you don’t have one.” Bobby Crim has become a champion runner. He is a master (read: age 60+) runner who participates in races all over the country and has stayed committed and involved in the Crim; in fact, look for him in this year’s line-up!

Looking back on 37 years of Crim, Lois says, “None of this would have happened without the good people in Flint and the wonderful volunteers.” She also says, “I don’t know of any other event that brings so much to the city. Flint is not a bad place; it’s a great place!”

These loyal volunteers helped make the Crim what it is today!