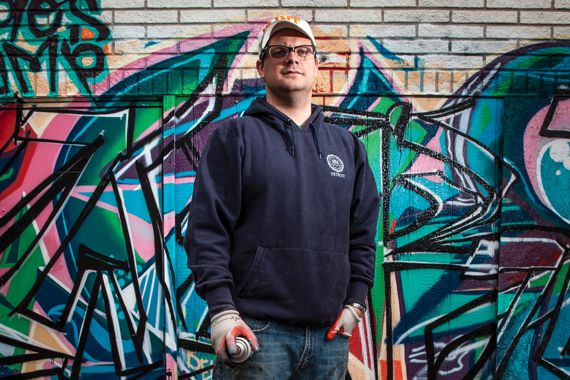 City-dwellers know that there are those who maliciously vandalize and damage property by spray-painting gang insignias and vulgar messages on public property. What many don’t know is that there are legitimate graffiti and street artists such as Charles Boike, who will almost certainly flip everything that you thought you knew about the underground art form – and “those graffiti people” – on its head.

According to lore, the modern incarnation of graffiti was born within the boroughs of New York City during the 1960s; and its scribes are said to run under the cover of night, senselessly tagging the world with tacky symbols and offensive phrases. Unfortunately, that’s how the general public perceives the community of artists, says Boike, who was quick to mention that his circle consists of law-abiding, respectful “writers.”

As a matter of fact, he’s one of them. The 31-year-old Powers Catholic grad just so happens to be a practicing attorney at the Flint-based law firm of Simen, Figura & Parker, PLC. Also a Greater Flint Arts Council board member and active with the Flint Institute of Arts, his work is featured in the private collections of Thomas M. Cooley and the Ruth Mott Foundation.

Boike doesn’t run around at 3am looking for a garage door to deface with a Sharpie, nor does he hang out in the gutters, dodging police before hitting a highway overpass. Every bit of color sprayed by Boike, who writes as “Wake Up,” is perfectly legal. He can do it in broad daylight without fear of being ticketed or taken to jail. There are certain advantages associated with knowing what to do and how to do it.

“The word ‘graffiti’ generally has a negative connotation or denotation – I want to change that perception. It’s not just ‘spray-painting.’ It’s a worldwide art movement,” Boike said while setting up for an invite-only session in mid-May at New Generation Tattoo, which sits at the corner of Fenton Rd. and 12th St. on Flint’s south side. The intersection was in need of some TLC, and Boike wanted to do something to improve the area’s façade.

Because it’s always more fun with a group, he used his standing within the community to recruit writers: “Jemz” (Pontiac), “Sehl” (Pontiac), “Nova” (Chicago), “Scraps” (Flint) and “User” (Flint) assisted in the neighborhood beautification process. Working from 1-6 pm, the collective spent the better part of the day with cans in hand and aesthetically pleasing images in mind. About a year ago, the tattoo shop was seeking artists who could brighten the vacant, adjacent lot. Boike was looking for more legal canvases; the match was meant to be. However, the parties’ initial meeting was a bit strange.

“I thought we were getting sued,” laughed shop artist SP El Blanco, who was among the first to greet Boike. “He was wearing a suit. We thought he was from the health department or something.” There’s that perception thing again. SP later admitted that Boike was refreshingly different from society’s mainstream view of graffiti/street artists. “You can’t base a person on their looks or what you’ve heard about what they do,” said SP.

Boike’s vision and reach span further than the Saturday get-together. With a thorough network, Boike unites musicians, performers and artists through his annual “Aerosol and Audio” festival. For the past two years, it’s been funded by mini-grants from the city, and Boike aims to recognize others who are dedicated to expression. “This year, we will have over 20 bands and over 35 street artists from around the country as well as local food trucks and vendors,” he said. “The festival’s focus is to bring local business, artists, bands, non-profits, schools and vendors together to create a dialogue around urban arts that empowers change, sustainability and understanding.”

By day, Kevin Burdick is a professional airbrush artist who creates eye-popping designs on motorcycles, automobiles and everything else that comes his way. The 28-year-old owns his namesake, Scraps Design Group, and moonlights as one of the Flint area’s premier street artists.

He differs slightly from the lone miscreant lurking in the shadows, right? Like Boike, Kevin tirelessly works to change the minds of those who think they “know.” Trained and disciplined, he takes his craft seriously and seamlessly connects his day-job with the passion of applying his mark. “It’s kind of the same thing – a spray-paint can is just a big airbrush,” he said with a laugh. “Our thing is that we like to call ourselves ‘street artists’ a little more. Sadly, that ‘graffiti’ word is equated with vandalism; those things go together. But they shouldn’t.”

Whatever it’s called, he’s in love with it. There aren’t many feelings that can compare to producing a high-quality piece. “The freedom, flow, bright colors – I don’t know,” he says before picking up a can and returning to the wall to add another stroke of a brilliant blue. “I try to go with a real 3D style. I would not say that I’m traditional by any means. I like to create my own style. As an artist, you want every piece to be different, but you want to find your own style.”

Since the mid-1990s, Burdick has painted with Boike, a childhood friend and classmate at Powers. Together, they’ve covered space throughout the state. Burdick takes pride in his legal status. However, he admitted to painting illegally “about five times” as a naïve high-schooler; nothing offensive, just practice. Today, he does his best to make right by covering offensive vandalism near his designated work area. 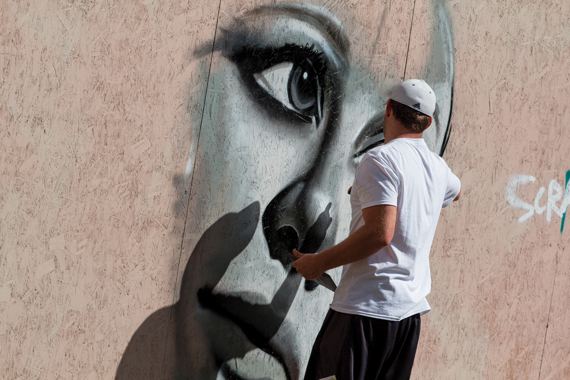 See more photos HERE, or purchase photos from this story by going HERE and selecting the “Charles Boike” category.