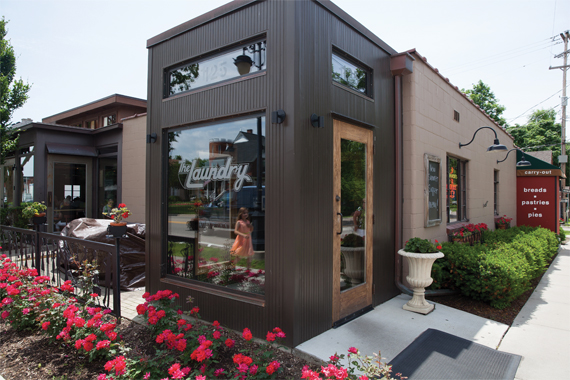 When dining at The Laundry, one of Fenton’s finest and most popular restaurants, the words eat well, laugh often and love abundantly come to mind. Known for many years as The French Laundry, the eatery began as a tiny place with just six tables and 12 sandwiches on the menu. But they weren’t ordinary sandwiches. Made with the finest quality cheese and bread from Zingerman’s of Ann Arbor, these sandwiches attracted fervent followers. Seventeen years later, The Laundry is a well-known destination for foodies from all over.

The restaurant was the brainchild of Mark Hamel, who decided to travel to France after graduating from Michigan State University with a degree in business. “Food tastes better in France and wine tastes better in France,” he smiled in remembrance. While there, Mark was inspired by the people and their love for food and wine. “I learned a lot about cuisine there,” he said. He came home with the idea to open his own restaurant and bring the simplicity of French food to Genesee County. But he didn’t have any money. So, he worked for his brother’s printing business and five years later, opened The French Laundry.

Mark wasn’t sure at first that he could sell his restaurant concept in Genesee County, but was quite surprised at the level of support he received from the community. The place evolved and continues to grow to this day. The Laundry serves breakfast, lunch and dinner with seating for 150 people, inside and outdoors. After obtaining a liquor license, Mark continued the trend he set of not serving the ordinary, and offered great pilsners and fine wines from all around the world. Now, with the huge popularity of craft beers, all brands on tap are made in Michigan and some of the wines are from Michigan wineries. Mark is even keeping with the current trend of offering house-made beer: The Laundry will soon add signature microbrews to the tap.

Five years ago, Mark’s brother-in-law, Chad Brennan, became co-owner of The Laundry, and the two took on the endeavor of opening Crust, a bakery also located in Fenton. “We wanted to expand into baked goods and become independent,” Mark explained. They traveled all over the country to explore bakeries and learn how to make the best. The two artisan-style ovens used at the baking company came from Verona, Italy, the only place in the world that makes them. Head Baker Mike Green learned bread-making at the French Culinary Institute in New York, leaving a successful auto industry career to pursue his passion for baking. Crust now supplies all the baked goods for The Laundry.

The food is what it’s all about at The Laundry, thanks to classically trained Chef Jody Brunori, whom Mark describes as “phenomenal.” The Laundry strives to create an atmosphere that is casual and fun (which is why they dropped “French” from the name) and to provide unique fare that is not intimidating. Knowing that food varies with the seasons, the menu changes three times each year. “Our seasonal menu reflects our passion for creative, great tasting food,” says Chef Jody. Chef Jody also prepares special dinners that pair wine, beer and whiskey with various dishes. “People appreciate how she takes the time to pair the food,” Mark says of his chef. On the current dinner menu are dishes such as Portuguese Stew (littleneck clams, mussels, fresh cod, Andouille sausage, potatoes and fresh tomatoes, sautéed with fresh herbs, white wine, fresh chiles, clam stock and butter); Crispy Chicken Under a Brick, and a Bacon Jam and Gorgonzola Burger. Watermelon and Charred Tomato Salad, Hearts of Palm and Avocado Salad, and Wilted Kale Salad are some of the fresh and delicious green options offered on the menu. Salads are made with fresh herbs, squash and tomatoes grown in a garden right outside The Laundry. “Last year, our garden yielded 2,800 pounds of tomatoes!” exclaims Mark.

Many regular Laundry patrons come for the cocktails. Bartender Jon Foley has always been ahead of the curve, according to Mark, and he saw a growing cocktail culture reminiscent of the ‘50s. “Jon’s cocktails are just fantastic,” boasts Mark. The bartender makes his own tincture, bitters and even marinates his own cherries. “Craft cocktails are really making a comeback right here in Mid-Michigan,” says Mark. On the menu are 100 Classic Cocktails with names such as Bees Knees, Dark & Stormy, Fog Cutter and White Lady. Classics include Bloody Mary, Rob Roy, Whiskey Sour and Martini.

Recently, business at The Laundry has gotten even sweeter. The newest – and probably most unusual – addition to the restaurant is a bee hive. One of the servers is a beekeeper, and she suggested to Mark that the eatery produce its own honey. “We use a lot of honey in our cooking,” Mark says, “so we decided to go for it.” The staff attended a beekeeping class in Cohoctah, MI and the server, Shannon, built a hive on the roof of the restaurant. The queen bee came with 15,000 worker bees, and now happily placed in the hive, the bees fly a two-mile radius to collect pollen. Mark expects that by fall, the bees will have produced 110 pounds of honey.

As he looks back over the last 17 years, Mark says he is still amazed by the growth of his business. “The city has been great to us,” says Mark, “and it all started with just 12 sandwiches,” he said humbly. “The bakery started with just a few loaves of bread. The bar was just a few varieties of beer and wine and now it has grown to be one of the best in the county!” Out of gratitude for the support he has received, Mark is very involved in the community. A Francophile at heart, Mark created the Bastille Day 5K Race, which is now in its 13th year and raises $10,000-$15,000 annually for Habitat for Humanity.

See more photos HERE, or purchase photos from this story by going HERE and selecting the “The Laundry” category.