Deep in the heart of Hollygrove, trouble is brewing. Queen Elizabeth sent the Governor Sir Richard Bingham and his nobles to rule the land of Ireland. The upstart pirates, led by Captain Victoria Slaughter, have mounted a fast resistance to the Governor’s perceived tyrannical rule. Sir Ender Thorne, Justice of the Peace, and his constabulary have the difficult task of keeping order between the two factions. In order to keep the peace, a system of trial by combat was created to settle the differences. The fight has begun …

You can watch this story unfold with the Duelist Academy/Ensemble at this year’s Michigan Renaissance Festival.

On a gorgeous August day, I went to Hollygrove (in Holly, MI) to speak with Renaissance Festival veteran, Shawn Amidon, about the upstart Duelist Academy/Ensemble (DA/E) and the excitement they have planned for this year’s festival-goers. 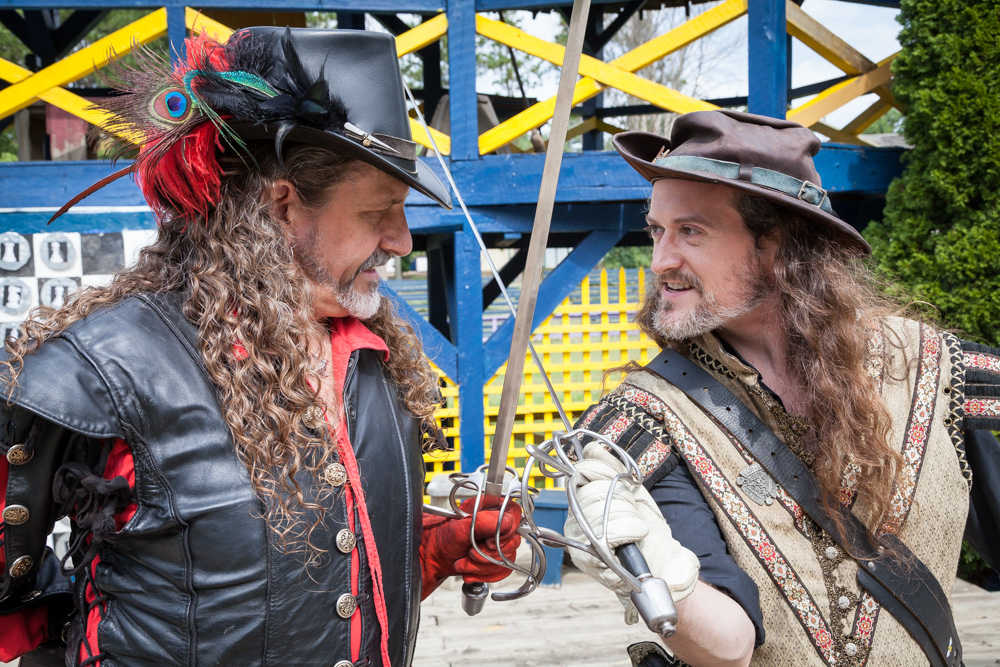 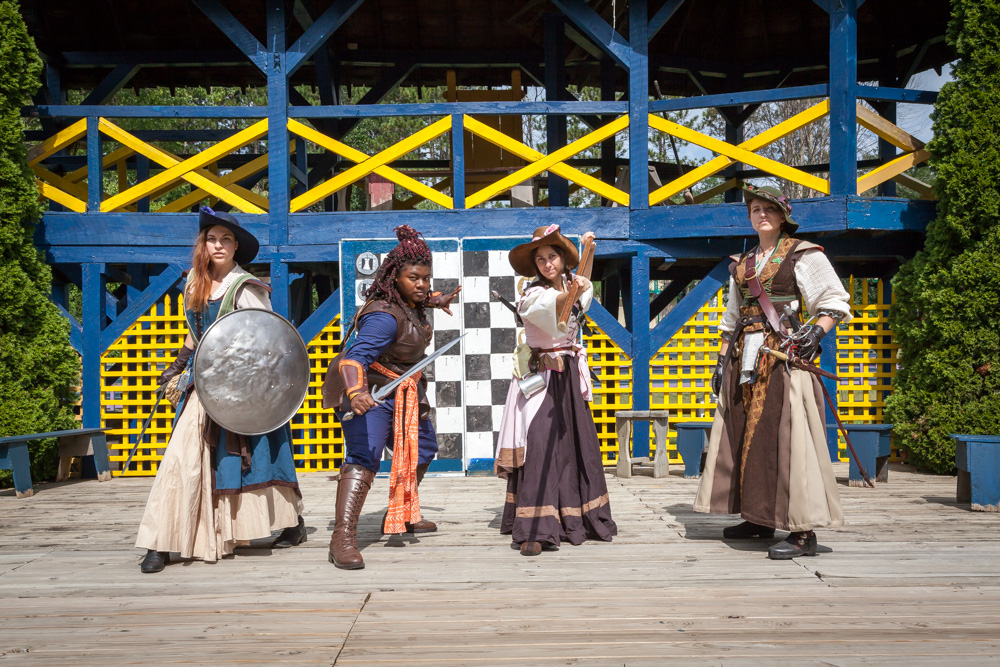 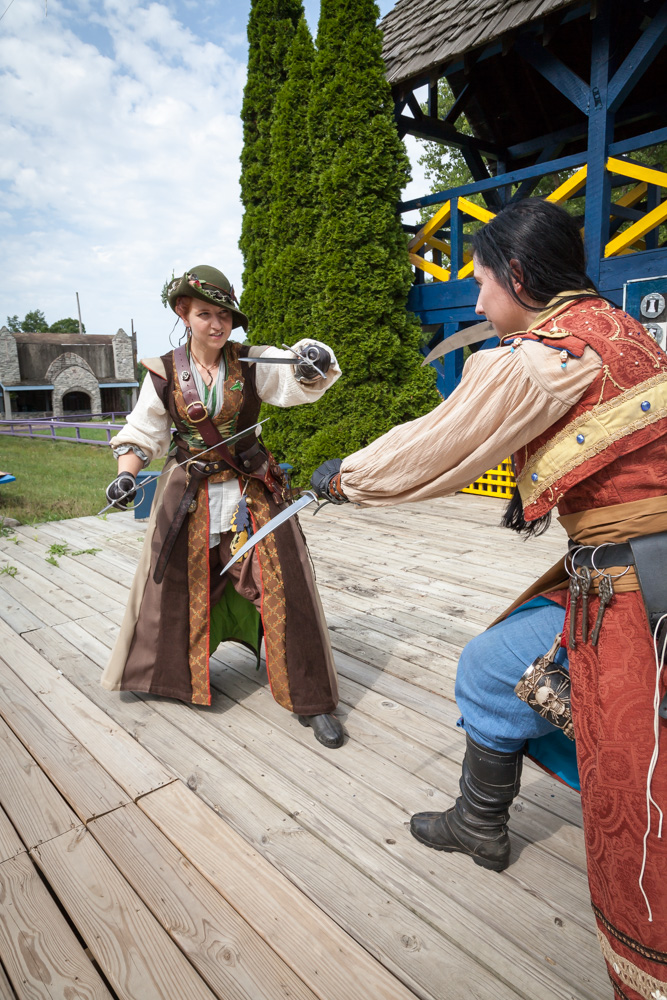 As soon as I entered the festival grounds, the joy that is Hollygrove emerged. I stopped and watched as the Queen’s procession moved slowly by, the beautiful Queen quietly nodding to her subjects as she passed. Further on, a group of flower girls were casually whiling away their time dancing to a song of their own, when I noticed a group of pirates rise menacingly behind me. I may have inadvertently entered their territory – I soon hastened away.

Eventually, I found my quarry, casually leaning against the façade of a wooden lean-to speaking to the Queen’s own privateer. Sir Ender Thorne, Justice of the Peace (played by Shawn Amidon) greeted me with a handshake. He isn’t an extremely large man, but he did have an extremely large gavel, which he had prominently displayed. “As Justice of the Peace, I am the arbiter of the DA/E trial-by-combat. It’s art imitating life,” joked Amidon.

Amidon is the DA/E fight coordinator/creative director and a Ren Fest veteran. “I had my first performance part in 1987,” he reminisces. “When I was seven years old, I played Prince Grover of Hollygrove.” Over the years, he has played both a villain and a hero. For the last three years, he has been a part of the DA/E and is very excited and proud of the cast. Having met the DA/E performers that day, I agree. They are amazing! 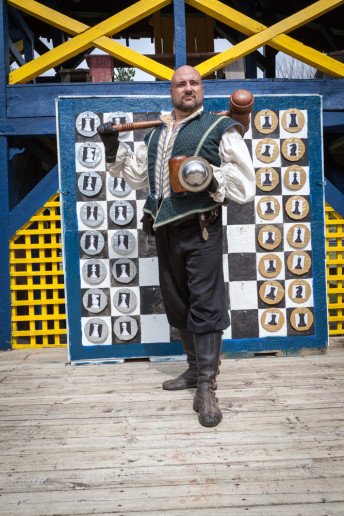 The Duelist Academy/Ensemble is the professional stage combat and performance troupe of the Michigan Renaissance Festival. “The DA/E was started a little bit out of necessity,” Amidon explains. “We had various successes with external combat troupes, and some moderate success with a hodgepodge of resident performers who could fight; but the Ren Fest really wanted to develop an internal professional fight team.” The groundwork was laid in 2015 for the first duelist academy – a training system for the fundamentals of stage combat and character development. Last year, the duelist academy graduated to a full-on stage show with the first human combat chess match in years. The DA/E is now an audition-only performance group pulled from those within the academy. “We have off-season training in hand-to-hand fighting, and training with various weapons,” says Amidon. “The best-of-the-best become part of the performance troupe.” This year, the DA/E will perform multiple shows daily in various locations throughout the festival. The feature performance, human combat chess, will be held at the Dais Stage behind the joust field.

“What’s unique about our little village is that we use the antiquated tradition of resolving differences called trial-by-combat,” Amidon continues. “In the conflict between the pirates and the nobles, human combat chess determines who is telling the truth and who is lying.” According to Amidon, human combat chess will feature nine distinct sword fights and, as a group, the DA/E will display two dozen fights throughout the day. “We have a lot of stage combat – all over the place!” Amidon remarks.

“We have a saying; we are in the business of best days ever.”
Scott Mullen

Chelsey Trefney portrays the pirate, Captain Victoria Slaughter. She is also the DA/E technical director. “I am one of the longest-standing members of the ensemble. It was my draw toward stage combat that got me involved,” Trefney shares. “I instruct and teach people how to handle the weapons and execute the moves safely in a theatrical style. I help develop the choreography and all the technical skill you see on stage.” Trefney has been training in stage combat for seven years. She trains with local groups and attends national workshops. “I love fighting for people!” she exclaims. “It’s such a joy to see people cheering – it’s great! I mean, it’s not everywhere you can be an angry pirate Captain and get away with it.” One of the best things you can do, she says, is join Captain Slaughter’s crew, “Come and see what it’s like to be a sailor,” Trefney laughs. It is Chelsey’s character, Captain Victoria Slaughter, who provides a unique twist in the story this year.

The DA/E’s newest member, Coral Berger, portrays Antiope Rose. “I joined the cast this year and it’s a lot of work!” Coral takes a breath. “These guys work so hard and for so many extra hours, even beyond the regular cast rehearsals, because stage combat is such a technical skill,” she adds. “Being safe and giving a great illusion of theatrical violence is a very fine line.” Berger, like her castmates, is not a novice when it comes to stage combat. She has trained with the Society for American Fight Directors and has done stage shows at smaller venues. “The team here is getting so much stronger and has so much creative freedom to tell the kind of stories they want to tell. I just wanted to be a part of it,” she says. The DA/E performers make the fighting look harmless – and it’s anything but. “The steel is real!” Coral exclaims. “They’re real swords and the danger is real at all times.” Secret: Berger informed me of a secret show (or at least, one not heavily promoted) that the stage actors all love, called “Shakespeare’s Shorts.” If you keep a good lookout, you can find it once a day at the Griffin Stage. 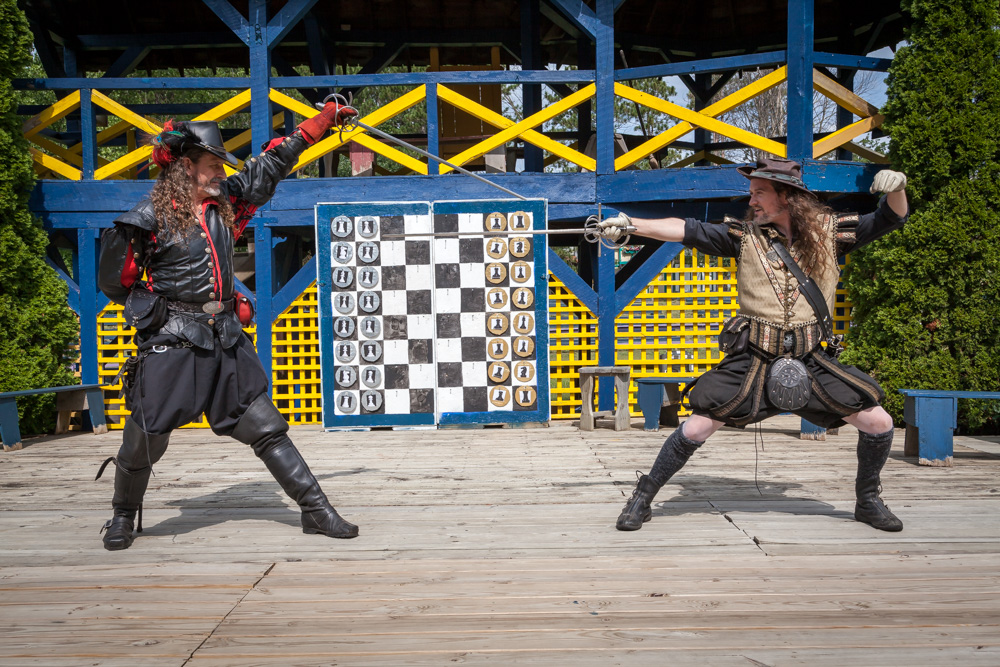 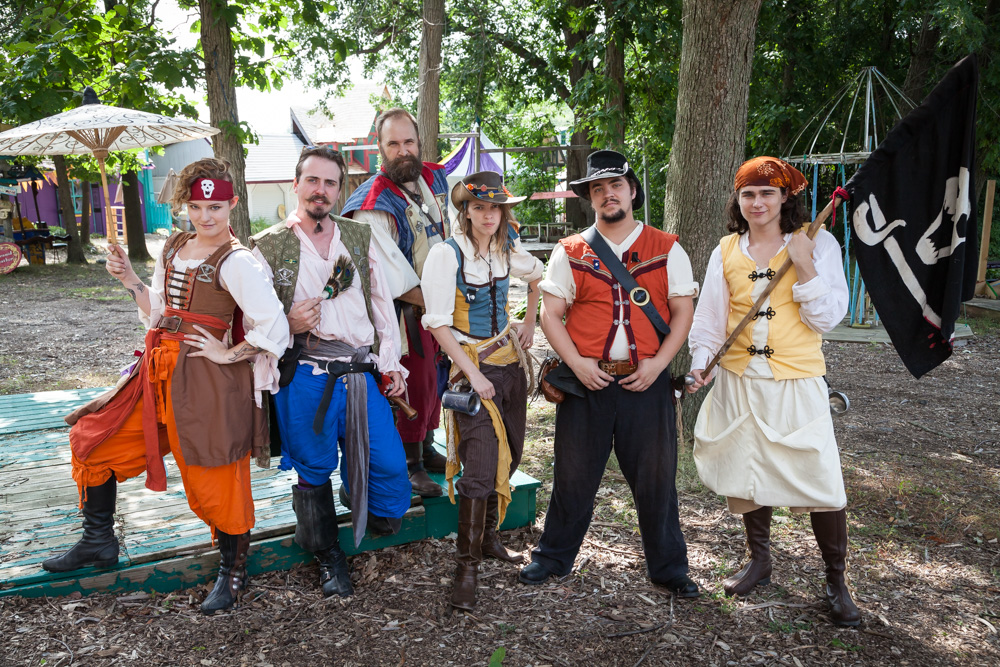 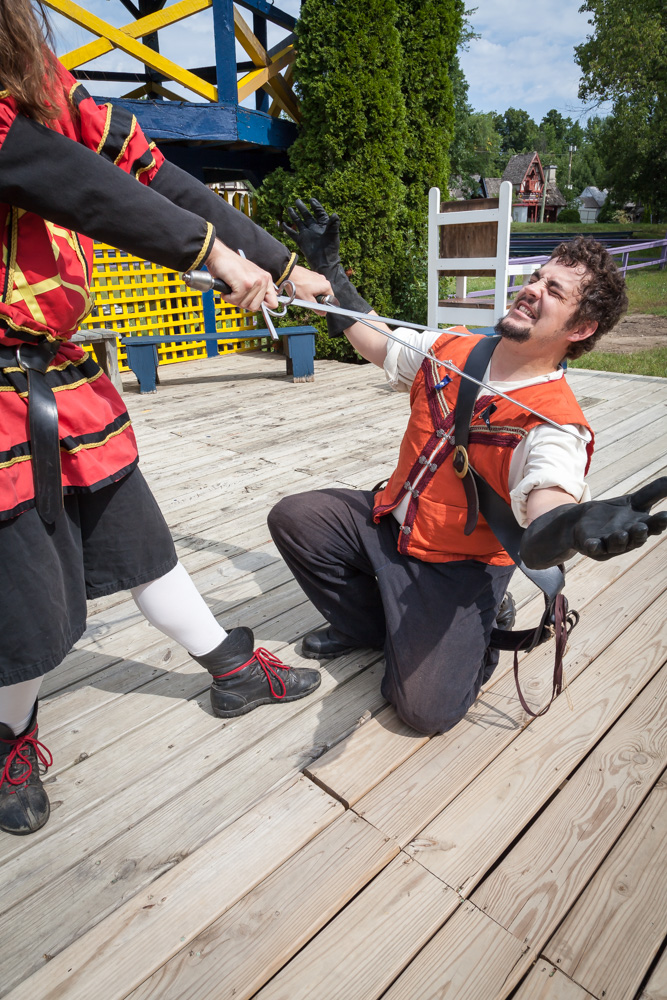 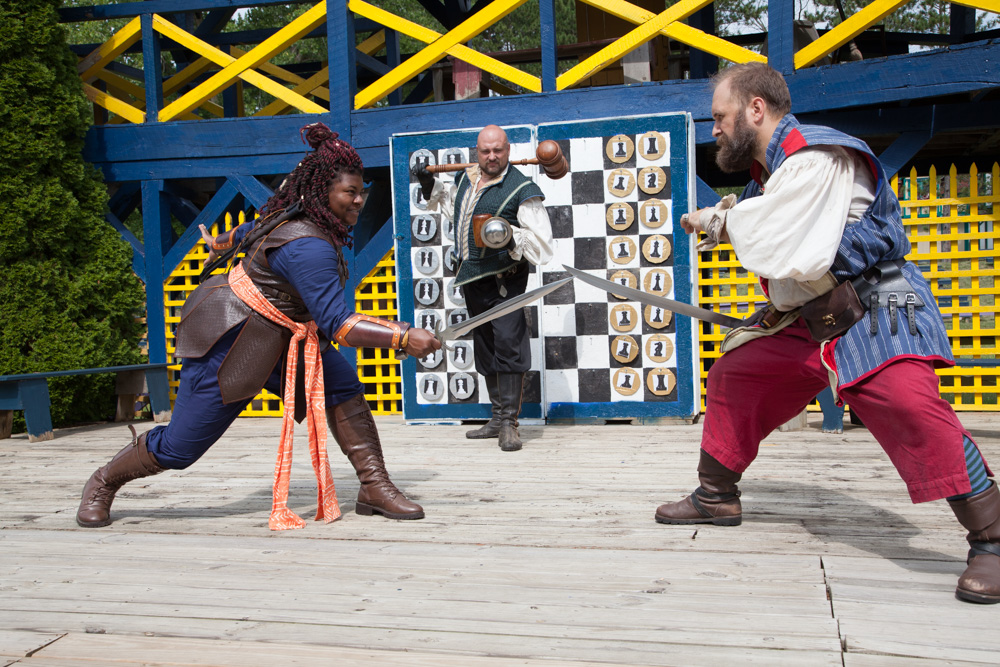 Scott Mullen portrays Sir Francis Drake, the Queen’s Privateer. A 30-year Ren Fest veteran and special guest star, he travels all the way from Florida to take part as a member of the Royal Court and the DA/E. “We have a saying; we are in the business of best days ever,” Mullen shares. “What we want is when festival patrons leave the site and are on their way home, we want them to say, that was the best day ever. I like to be a part of doing that for people.”

As our time began winding down, I asked Amidon what keeps him coming back every year. He replied with sincerity, “It’s the community we have. I’ve been here all my life. I work with the DA/E to make sure that up-and-coming stage performers had a safe, fun and entertaining environment to learn and grow and flourish. I want to give back the thirty-plus years of experience that my mentors have given to me over the years. We are a warm and wonderful extended family.”

The Duelist Academy/Ensemble brings a great feeling of excitement to the Renaissance Festival. The story is deep and intricately woven. You’re not going to want to miss a battle! You certainly shouldn’t miss human combat chess … it’s just a fantastic show. 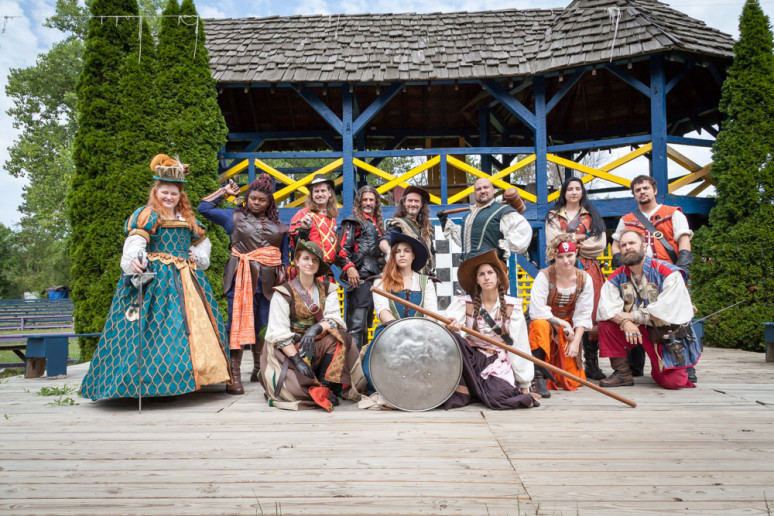