Did you hear the sad news today?
Another veteran warrior has passed away. Called by the
Supreme Commander over all.
Today he has made his final roll call.
“Final Roll Call,” Verse 1

Barbara Kincaid, Curator of the Linden Museum, is a Gold Star Mother – a title she never wanted to have. A Gold Star mother is one who has lost a son or daughter in a war or conflict. Her only son, William George Henry, lost his life on August 10, 1990. Bill enlisted in the Navy in 1984 and after training in San Diego, CA and around the country, he was assigned to the Seventh Fleet, on the destroyer USS Buchanan, as a Fire Control Technician. “He was responsible for launching missiles from the ship as enemy planes flew over the fleet,” Barbara explains. Her son was deployed three times to Iraq during Operation Desert Storm. With his secret security clearance, she at times did not know where he was. “But he would call me every Mother’s Day,” she remembers. 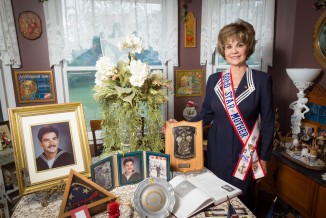 “It was a Friday,” she says of the day the news was delivered to her. She described her emotions in a chapter she was asked to write for the book, Chicken Soup for the Christian Soul:

The van doors opened and several men got out – Navy men: an officer, a chaplain and an enlisted man in his dress whites. There’s only one reason that a configuration of Navy personnel comes to your house. I panicked. I started pacing up and down the hallway, shouting, “On no! No, no!” The doorbell rang. Still I paced, somehow thinking that if I didn’t answer, it wouldn’t be true. When I heard the knocks, I knew I had to go. I opened that door and said to the solemn-faced officer, “Don’t you tell me what you’re going to tell me.” “I’m sorry, ma’am,” he replied. “I have to.” Bill was dead. My only son was gone.

Barbara and her husband, David Kincaid, lived in California at that time. The Navy returned Bill’s personal effects to the grieving mother, and sitting on top of his things was a shiny new pair of sunglasses. “Wow, I have his sunglasses,” she thought to herself, “but I don’t have Bill.” At the military funeral service, she was presented with an American flag and a Gold Star Mother pin. She was told: “From the President of the United States and a grateful nation, you are a Gold Star Mother.” 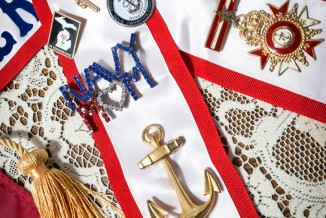 For Barbara, the grieving process was long and difficult. “It’s something you don’t forget and never get over,” she says. The chaplain had told her, “Something good will come from this,” but she didn’t see how that could ever be. But something good did come from her loss. She became very involved in the Gold Star Mother organization, which she describes as the only organization that has no desire to see their membership grow. “Sadly, war increases our membership,” she says. The organization started in 1928 shortly after World War I and now includes satellite Gold Star groups for siblings, spouses, children and other family members who lost someone in a war.

Barbara’s goal is to continue honoring those who have made the ultimate sacrifice. She is present at a variety of Memorial Day services and walks in parades as an honored advocate. She is a lifetime member of the VFW Ladies Auxiliary in Fenton, and offers support and comfort to other Gold Star Mothers, attending funerals and leaving a red rose for the bereaved. She also visits veterans’ hospitals. “They say one of the most devastating losses is to lose a child,” Barbara notes. “A mother doesn’t want her child to be forgotten.” 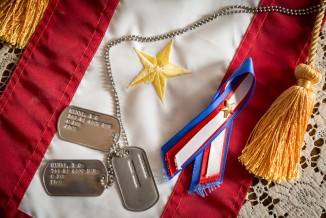 In 2005, the Kincaids moved back to Barbara’s home state; they now live in Linden and are actively involved in their community. Barbara helped form the mid-Michigan Chapter of Gold Star Mothers and is very involved with the organization. “After losing my son, I had a choice to make,” she says. “I could become bitter or I could become better. I chose better. I believe helping others has made me a better person.”

Gold Star Mother’s Day is observed on the last Sunday of September. The President calls on Americans to display our nation’s flag and to express their love and sorrow to Gold Star Mothers all around the country. And on that day, Barbara will be remembering her son, her Bill. A Gold Star banner will be displayed in the window of her home. And she and David will light a candle near Bill’s photo, say a prayer and shed a few tears. “I carry him in my heart every day – wherever I go.”