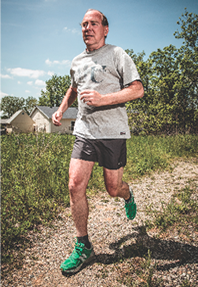 Mark Bauman is the envy of anyone who has ever attempted to stick with an exercise regimen … so, pretty much all of us. Commitment to exercise is a common New Year’s resolution that, in many cases, has all but faded into oblivion by Easter.
Bauman’s commitment to fitness began in 1966 when he joined the track and cross country teams at Ainsworth High School and instantly fell in love with running. Nearly 50 years, 120,000 miles and more than 150 marathons later, the 64-year-old Flushing man is still at it, claiming that he feels like he has never left the honeymoon phase of his relationship with the sport.

What keeps Mark lacing up his shoes and hitting area roads on a regular basis? “I just like feeling healthy,” he says. “I haven’t felt anything but healthy my whole life. Before I started running I felt healthy because I was young, and running has kept me feeling that way.”

Running has brought Mark much more than health benefits. His longevity in the sport has produced some impressive streaks that few others can match and has allowed him to turn his passion into his life’s work through ownership of Bauman’s Running & Walking Shop in Flint.

The 2014 calendar year is especially satisfying for Bauman as he marks milestones, celebrates an important anniversary and enjoys a feeling of redemption upon returning to the Boston Marathon one year after terrorist bombings at the finish line killed three and injured nearly 150.

Perhaps Bauman’s most noteworthy achievement is competing in the past 45 Boston Marathons. Only two other runners in the world have a longer active streak. In all but ten of those years, Bauman met the qualifying standard in order to compete, although he divulged that he worked his way around that qualifier on the few occasions he didn’t meet it in order to keep his streak alive. “Overall, I’ve been lucky enough and remained healthy enough to keep going back to Boston to compete in that special event,” he said. “There were a couple of years when I missed the qualifying standard by maybe a minute, but wrote the race committee and explained how many years I had already been in the race and they let me in.”

Roughly ten years ago, qualifying standards were waived for anyone who had competed in at least 25 previous Boston Marathons. “That’s allowed me to become a little lazy,” Bauman joked.

In 2013, Bauman was less than a mile from the finish line when bombs exploded, causing instant chaos. “I knew something was wrong when spectators were running from the direction of the finish back toward me and those still on the course were diverted from the finish line,” said Bauman as he recalled that chilling day.
Three days prior to this year’s race, Bauman returned to the location where he had been steered off the course the year before and walked to the finish line. At the finish, he was greeted by members of the Old South Church who were handing out scarves honoring victims of the tragedy. “The entire experience was a little surreal,” Bauman remembered, “from traveling alone, which I don’t normally do, to the redemption of walking to the finish line, to getting the scarf, which had the most impact on me.” This year, Bauman says things were different: “Obviously, the security was increased and there were many more spectators along the course. The weather was perfect.”

As a 20-year-old college student, he was one of 1,100 participants, compared to 36,000 this year. Bauman and teammate Tyrone Griffin drove to Boston and completed their first marathons. “We drove straight there, slept on the floor of the YMCA and drove right back home after we finished,” recalled Bauman, who had not finished his first marathon two years earlier in Detroit. “There were no mile markers, just signs that said things like 15.3 miles left. There was really nothing for the runners at the finish line then, other than hot stew, which I don’t think we ever found.”

One benefit of such a small field of runners was that spectators held sheets with all the runners’ numbers and names on them, allowing them to yell encouragement by name. There was one problem for Bauman, however. “People were yelling a different name at me as I passed, and I later found out my number (969) had been pinned on upside down, so people were shouting 696’s name at me.” Mistaken dentity aside, Bauman was hooked on Boston. Five years later, in 1975, he ran his best time of two hours, 30 minutes, 32 seconds.
Boston is just one streak Bauman plans to contin 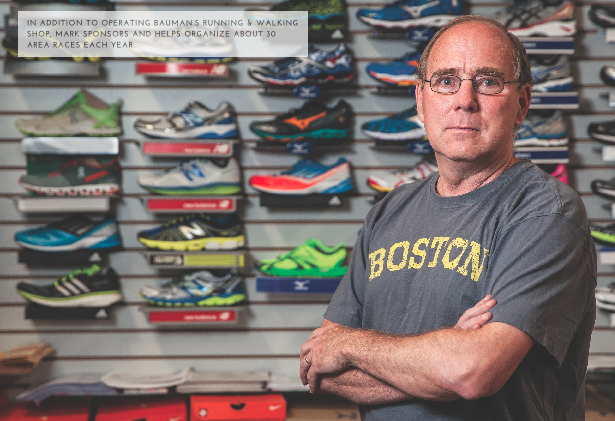 ue this year. He is one of fewer than 20 who have completed all 37 Crim ten-mile races. Bauman has also completed all 36 Detroit Free Press International Marathons and all 38 Volkslaufe Races in Frankenmuth.
This year, Mark is also celebrating the 40th anniversary of Bauman’s Running and Walking Shop, the area’s premier destination for gear, apparel and advice. It began in a humble way when he was 24 years old. “It started as a means to support my habit of traveling to races,” he said. “I kept merchandise in my living room and sold it from my door on race days. Eventually, people started coming to my house to buy things.”
After four years, the business had outgrown Bauman’s home and he opened his store on West Hill Road. “For me, the most satisfying thing about the business is just being able to help people discover and continue the joy of running,” he said. A very loyal customer base is another perk. “I see people today in my store who at one time came to my living room and that’s awesome!”
These days, Bauman runs about 35-60 miles a week, mostly on roads around his home with a group of friends. One of them is Grand Blanc’s Bill Kehoe. “Mark is just so knowledgeable about running that I still pick his brain, even after knowing him nearly 20 years,” Kehoe said. “Clearly, Flint’s running scene would not be what it is today without Mark. It would not be as strong and there would not be nearly as many races.” Bauman, who sponsors and helps organize about 30 area races each year in addition to all of his other work, feels his impact, and claims that his notable racing streaks are far from finished. “I still love the thrill of training for and completing a marathon, organizing races and helping people in the store,” he said. “I can hardly imagine not doing that.”