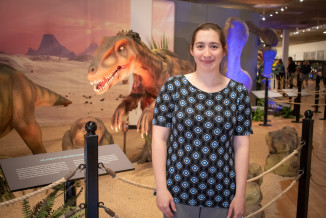 “The dinosaurs have sensors and they move whenever the kids get near them. They’re huge, too!” says Shawnna Shorkey, a Burton resident and mother to Katherine, 9 and Andy, 12. “They’re a lot bigger than what I remember as a kid. My kids were super excited and want to go back again.” Their favorite is the underwater, swimming Bishanopliosaurus dinosaur with moving fins. “We also spent time at the hands-on stations and read all the informational text about the dinosaurs,” adds Shorkey. “If it’s too hot out or if it is raining, it’s the perfect indoor event for families.”

The feathered, rumbling and roaring, not-fully grown Tyrannosaurus Rex gets the attention of Katherine and Andy and thousands of other families and kids visiting the 6,000-square foot display. “He roars, moves his arms and legs, and his tongue moves,” says Shorkey. “Katherine wanted to pose for photos next to all of her favorite dinosaurs.”

Shorkey’s own memory of seeing dinosaurs as a child is good news to Caitie O’Neill, Marketing Manager at Sloan Museum and Longway Planetarium. 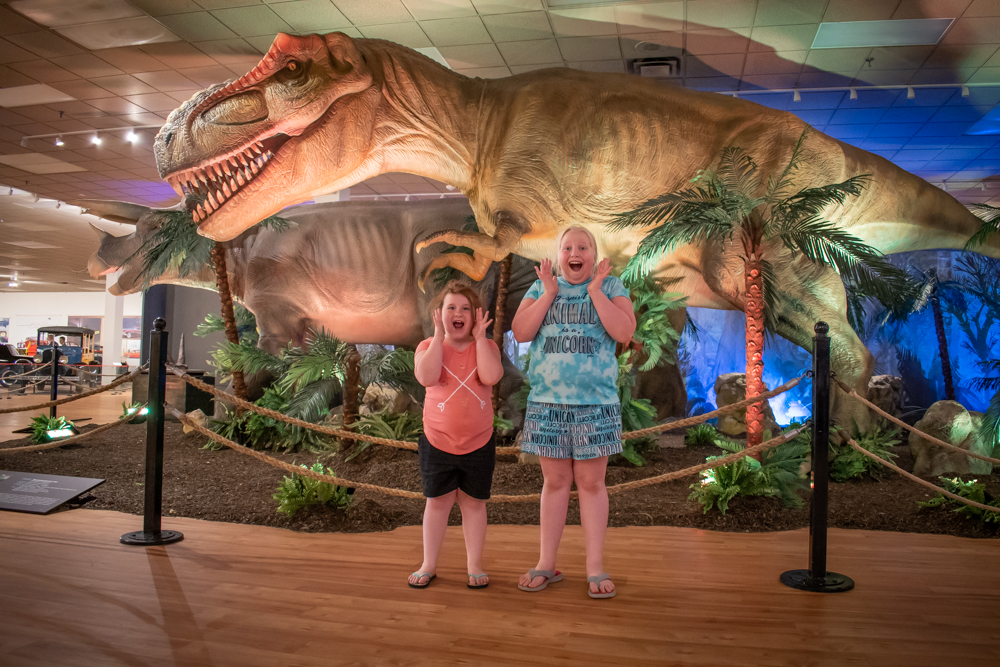 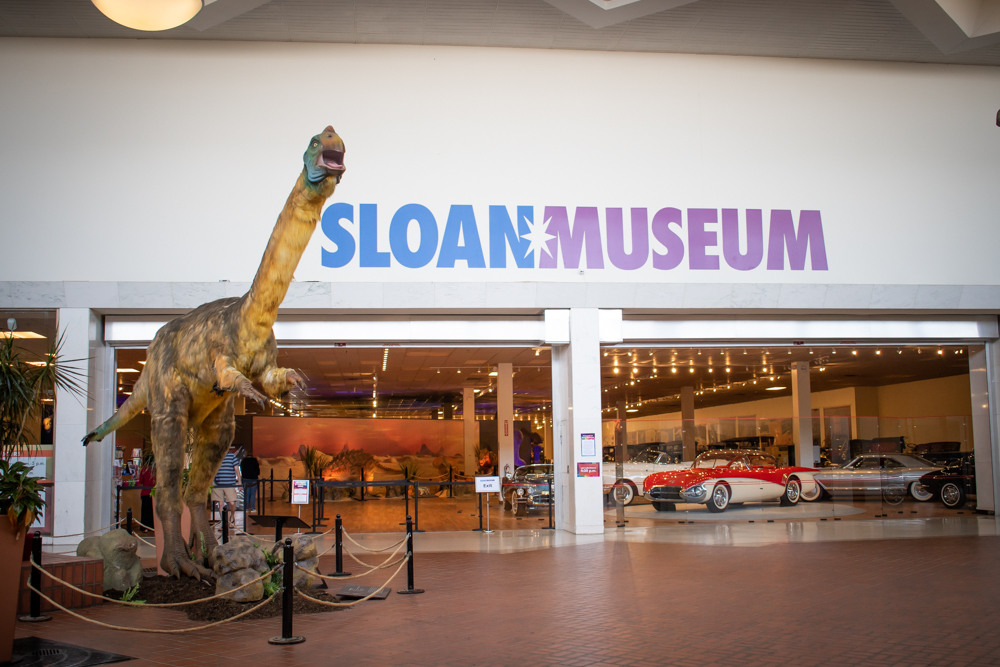 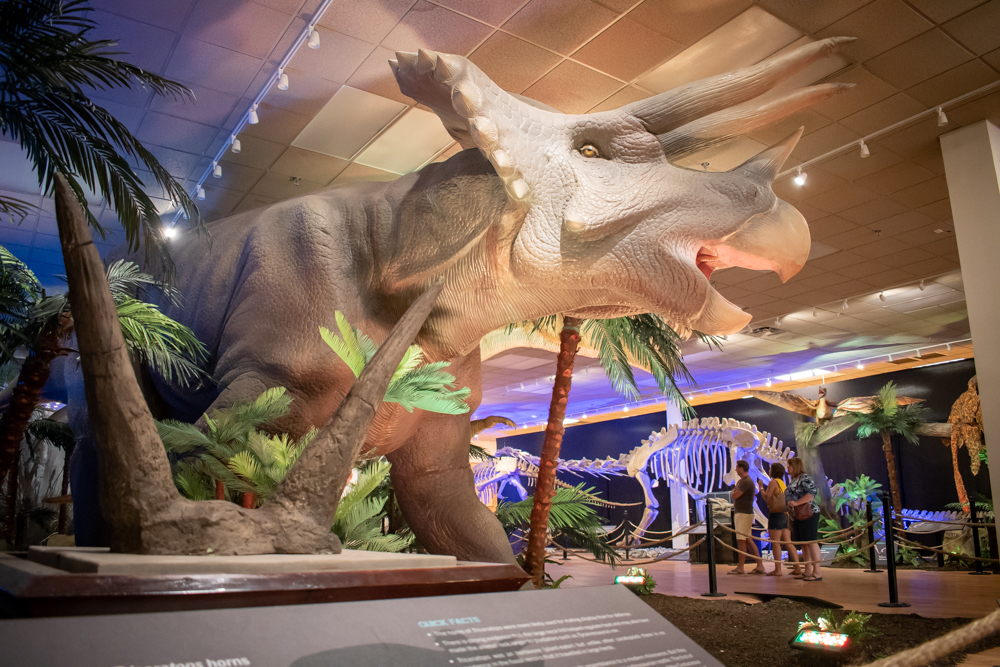 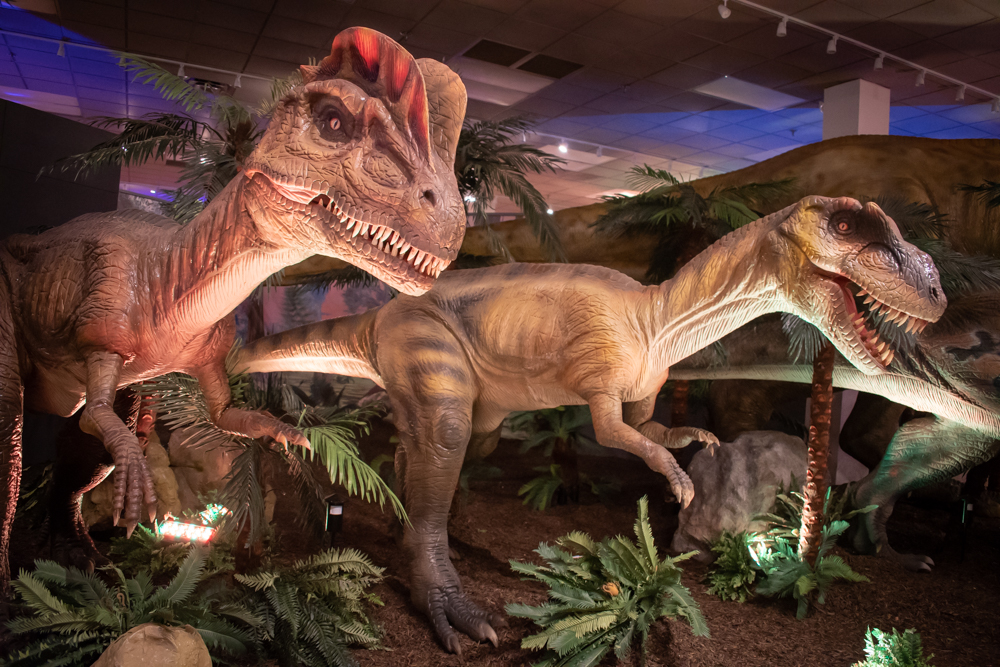 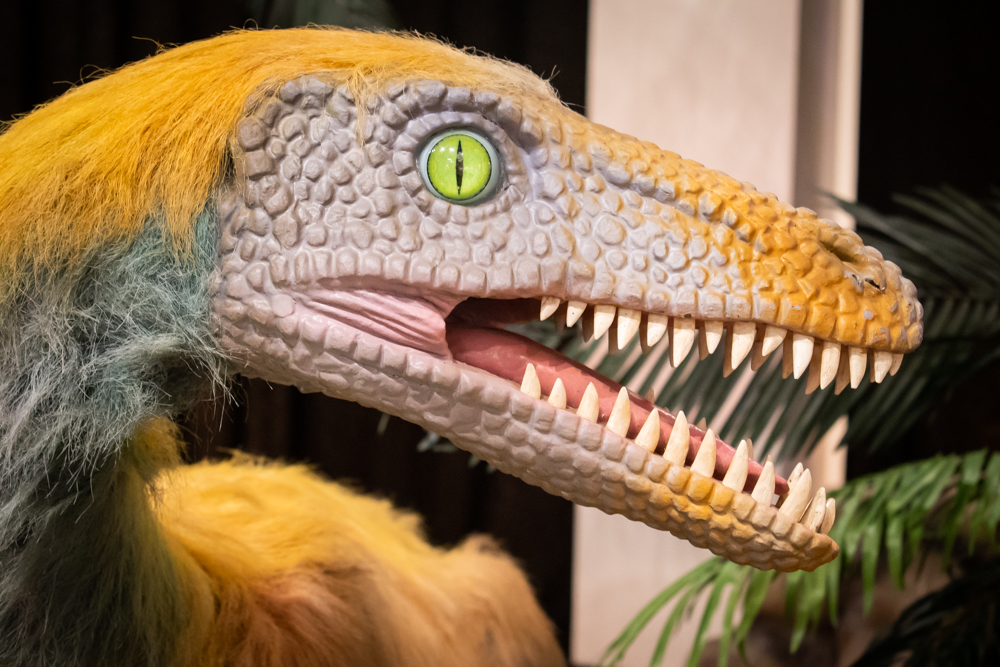 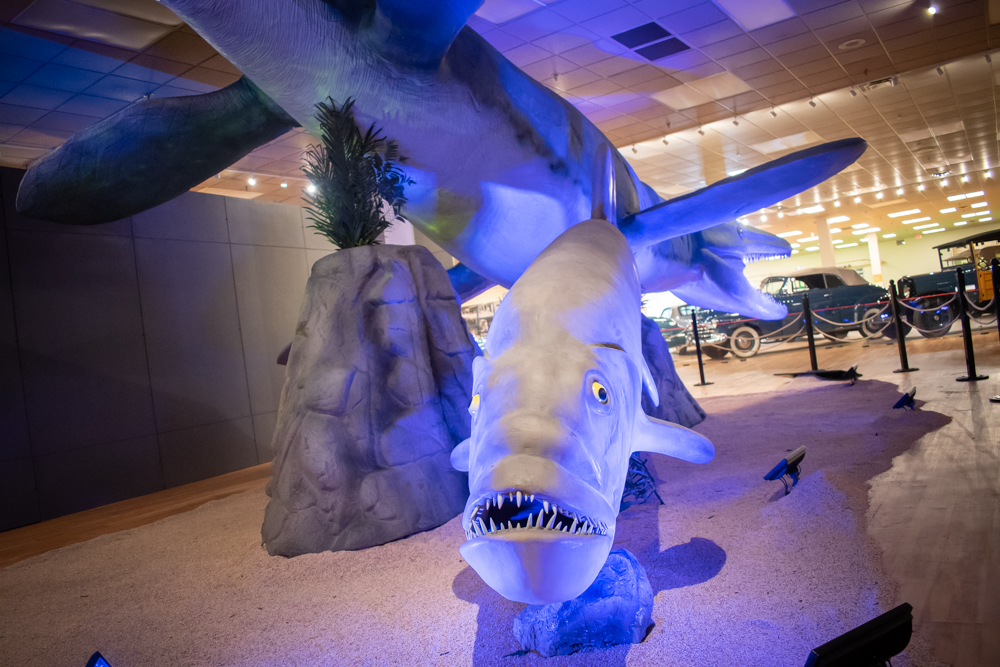 “Our goal is to make sure every generation of kids in Genesee County gets to experience a dinosaur exhibit,” she explains. “When we realized this modern display of dinosaurs was too big to fit inside the Sloan Museum, we collaborated with Courtland Center because their facility offers high ceilings and plenty of space to create a satisfactory experience for guests. In addition, the Buick Automotive Gallery is under some structural repairs, so it’s also the temporary home for 30 historic vehicles. Visitors can see historic cars and prehistoric creatures all in one trip!”

The Shorkeys were pleasantly surprised to see all the historic cars. “That was a bonus,” she says. “We were able to get close-up and really inspect the cars, get photos and see the changes in automobiles through the years. But the dinosaurs were our favorites.”

“This is truly one of the highest quality dinosaur exhibits available.
It has traveled around the United States, Canada and Australia.”
Caitie O’Neill

O’Neill says the self-guided dinosaur exhibit also includes fossil casts of skulls, horns and claws, skin, bones, skeletons, eggs, dinosaur sounds and various specimens to inspect. “The most popular activity is the brush and sand area where kids can work like real paleontologists.”

Kids around the world enjoy the dinosaur exhibit.

“It was created by Premier Exhibitions, the same company that created Titanic: The Artifact Exhibition,” says O’Neill. “This is truly one of the highest quality dinosaur exhibits available. It has traveled around the United States, Canada and Australia.” 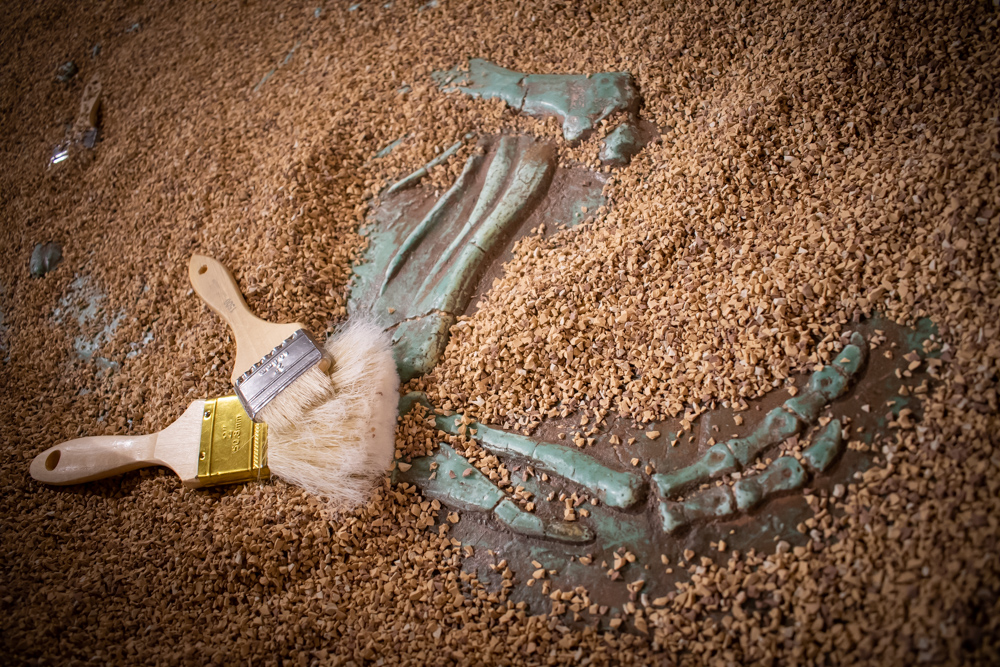 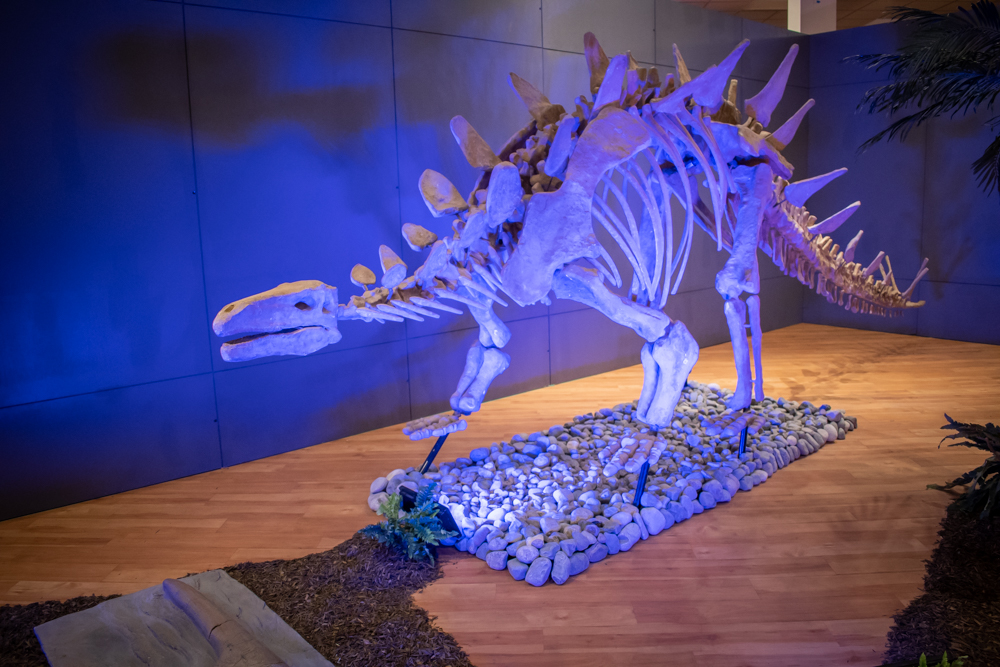 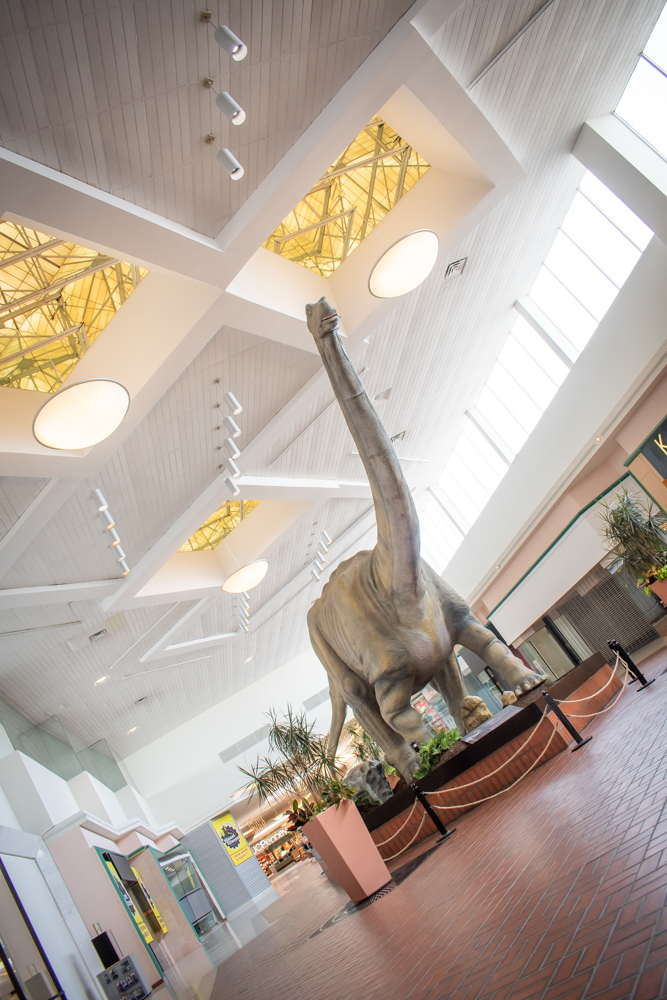 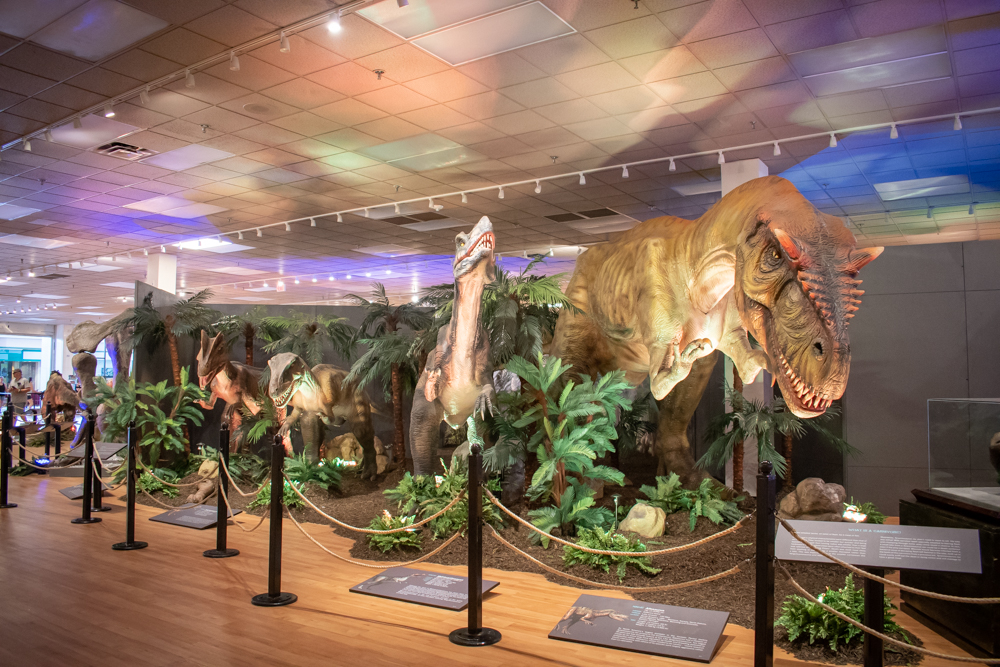 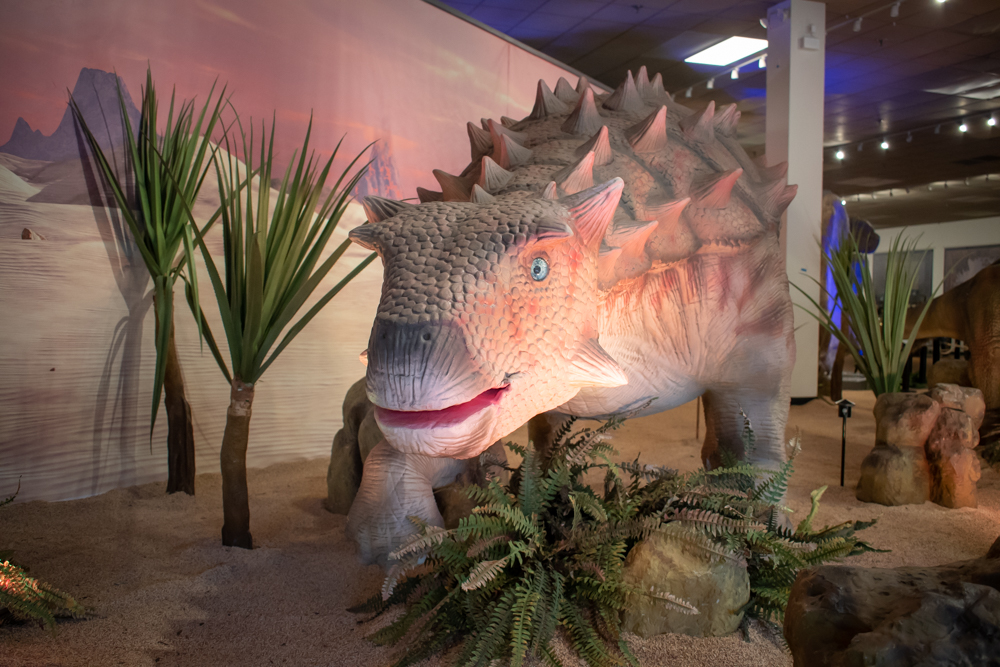 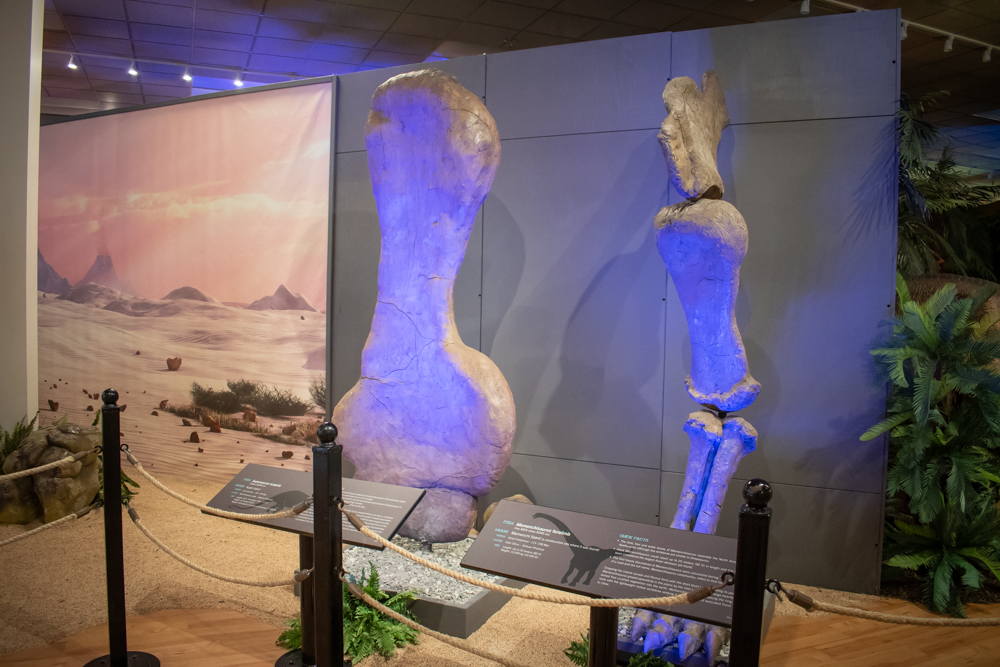 The behind-the-scenes labor includes many hours of careful set-up. “It took about a week to install,” says O’Neill. “We have internal staff who always put in long hours preparing, and we also bring in crew members from around the state to help with large-scale exhibits like this one.”

O’Neill says groups such as summer camps, daycare centers and other community organizations are planning trips to the dinosaur replica extravaganza. The exhibit is on display through January 6, 2019. Get tickets online, at the door or by phone: adults $10; $9 for seniors and $7 for kids age 2-12. 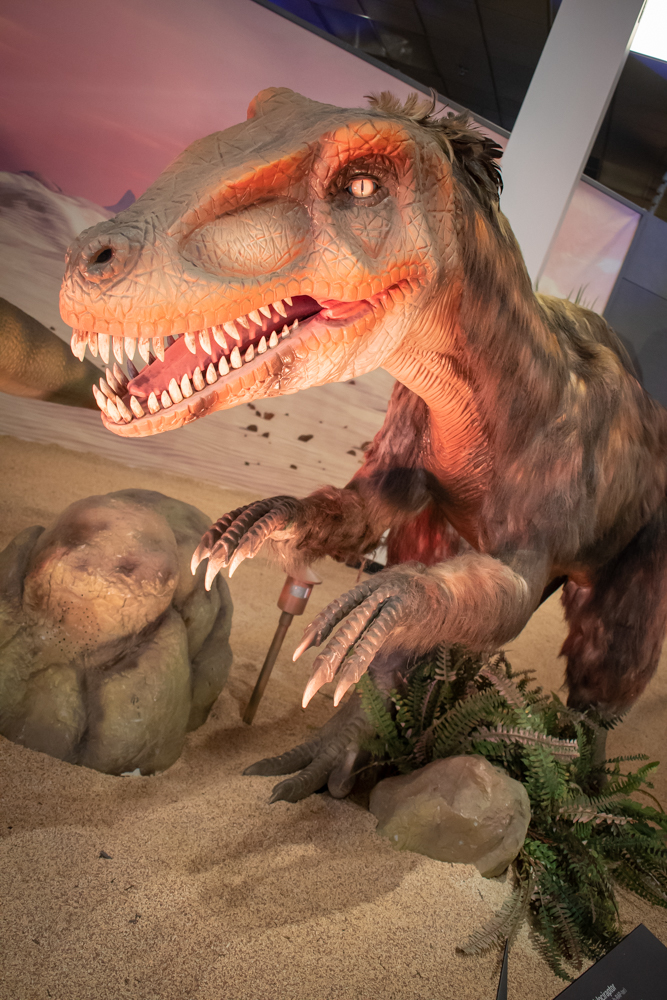 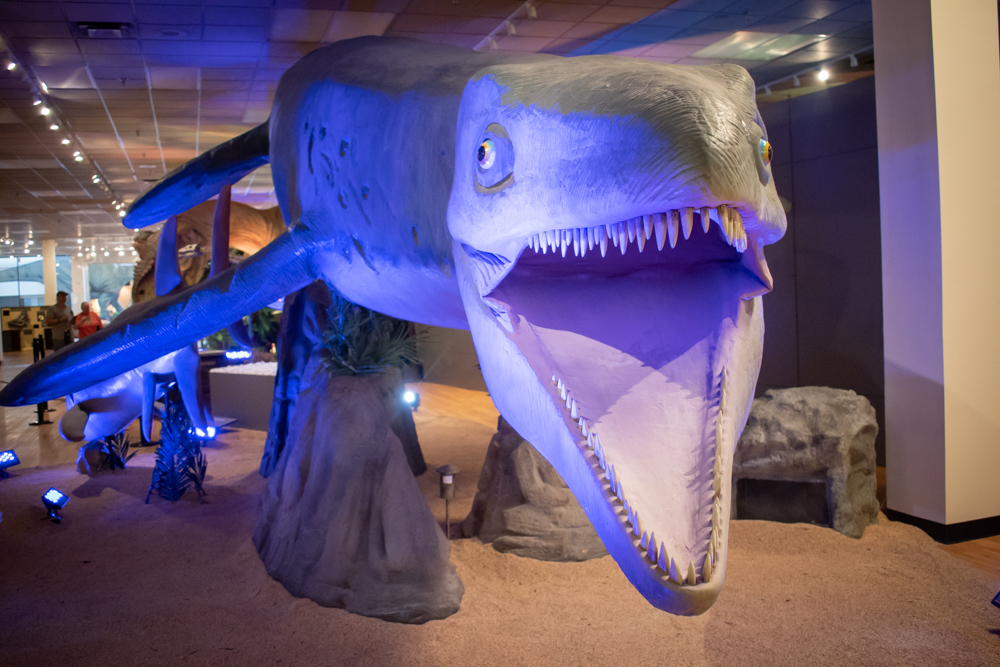 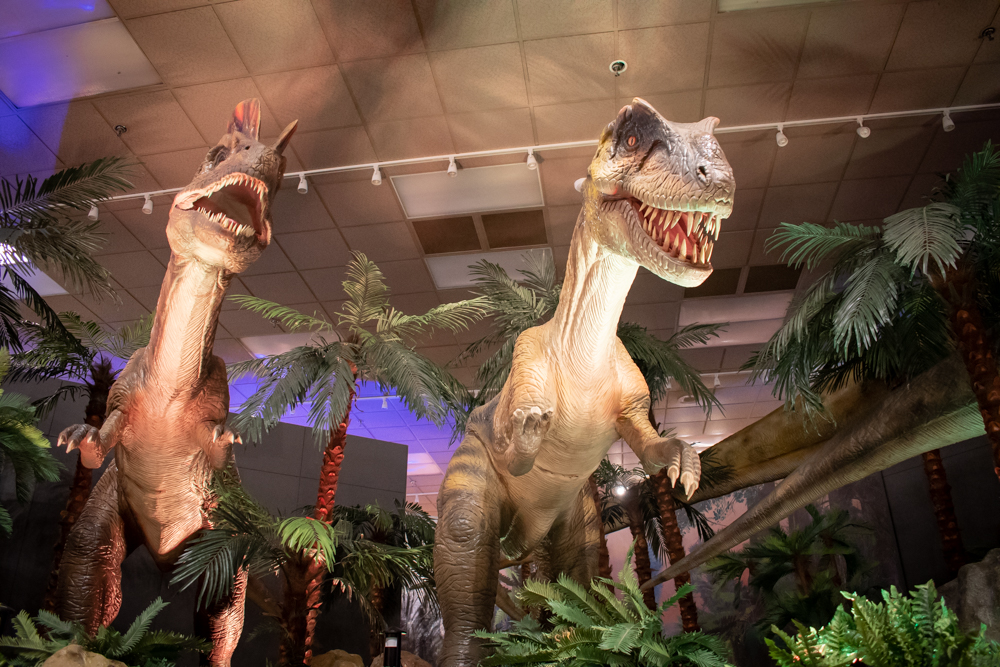 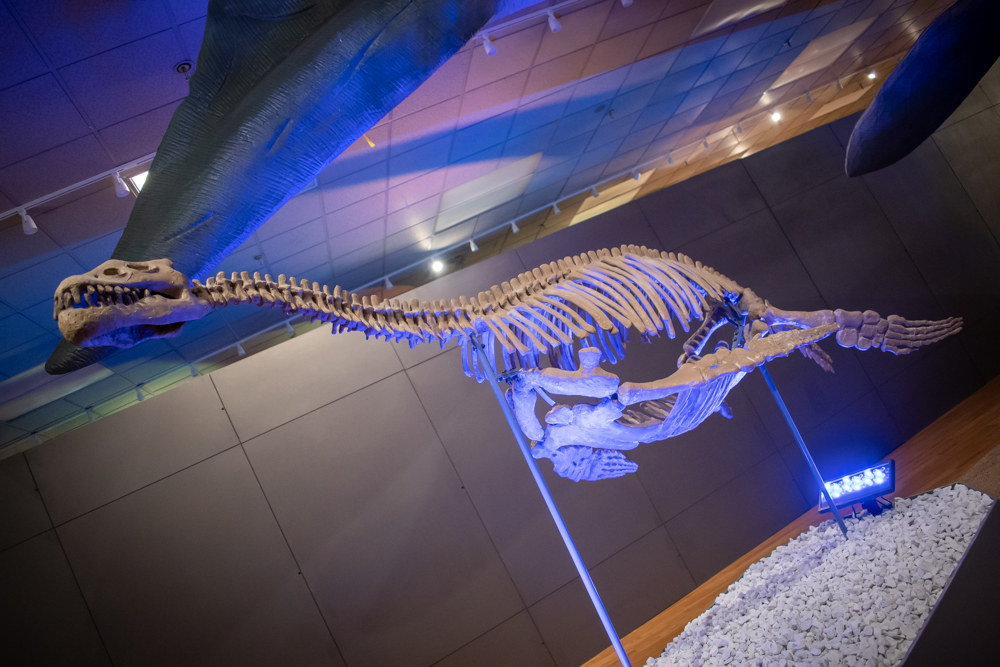 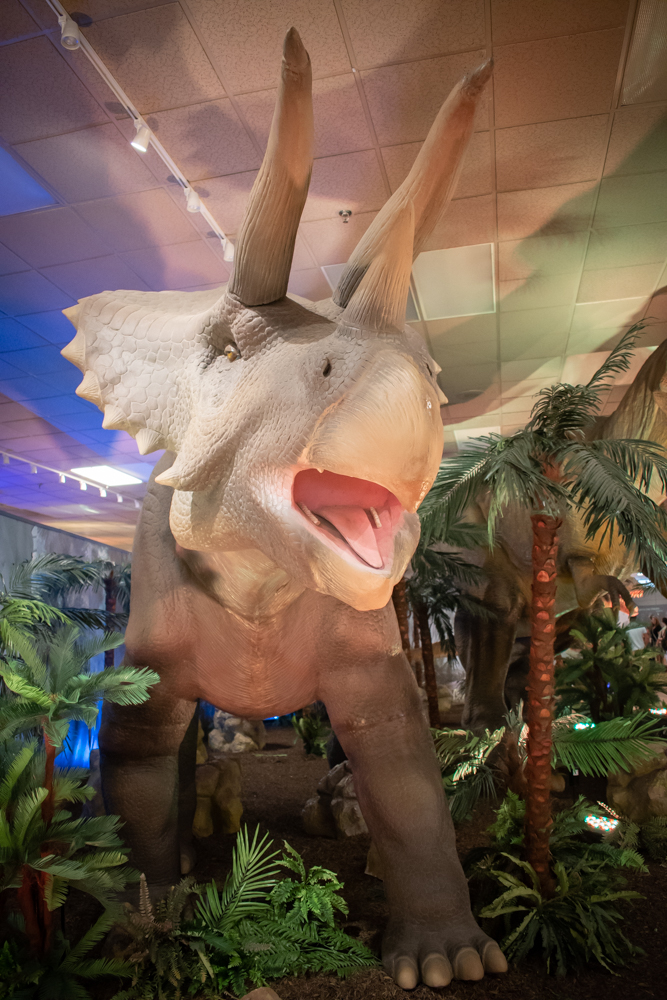 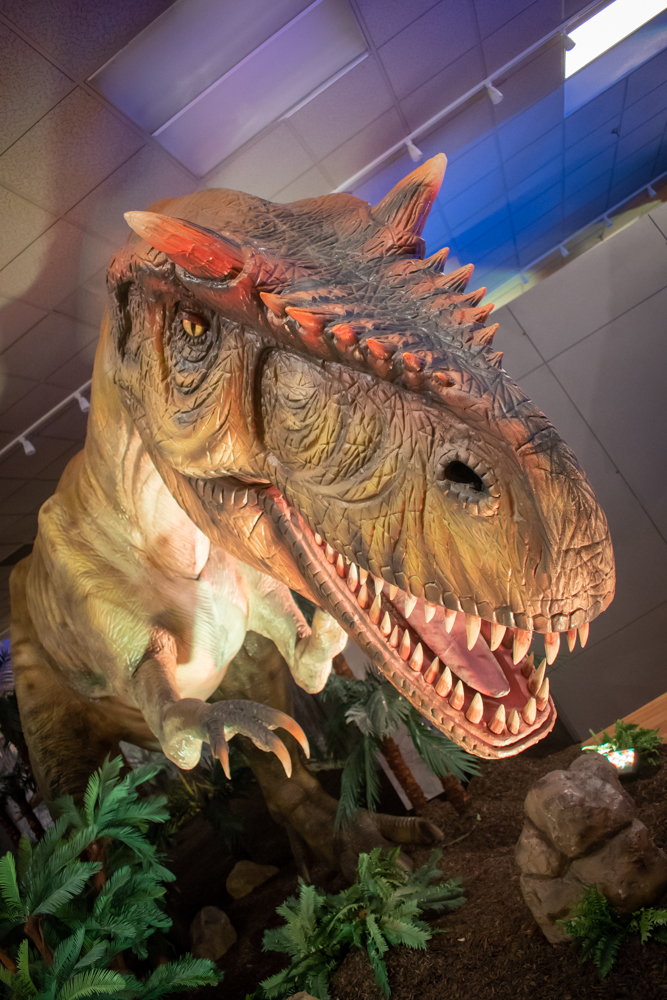