In the early 1970s, a pair of young, Flint-area running enthusiasts took it upon themselves to address a glaring problem. The local running scene was very different at the time, and finding an outlet for one’s competitive juices often required extensive travel. It was a more tedious process, to put it mildly, than today – when a quick scan of Internet race calendars usually provides a myriad of nearby options on most weekends. So, in stepped John Gault and Mark Bauman to tackle the issue. 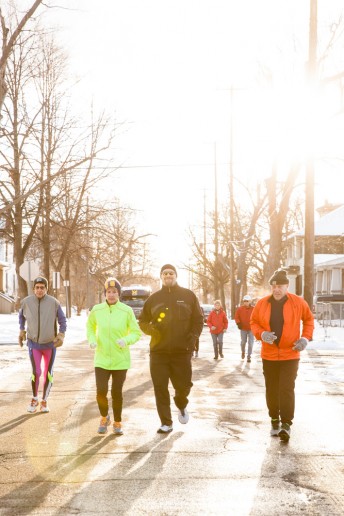 “The number of races in the area was few and far between and we wanted to find a way to create more racing opportunities,” recalls Gault, who boasts a marathon personal-best of two hours, 37 minutes. “On some weekends, you really had to travel to find a race to compete in. We also wanted to form a year-around training program to help runners get the most out of their ability, because a lot of them wanted to train to race good times.” Hence, a new local running club was formed. The only thing left to do was come up with a name for it.

The two men, who both still call Flushing home, actually struggled to find one that fit until hearing a commercial on the car radio one day. “It was for a bargain furniture store; I don’t recall the name,” Gault says. “I just remember it said the store was located ‘in Flint where the river bends’, and from that, we came up with Riverbend Striders.”

More than 40 years, many memorable races and pioneering achievements later, Gault, Bauman, and the Riverbend Striders continue to impact the Flint-area running scene. In fact, the pair’s influence extends well beyond what they had done with the Striders.

A few years after the club was formed, Bauman founded Bauman’s Running and Walking Center, which remains the area’s premier destination for running and fitness apparel and shoes, and sponsors several races a year separate from the Striders. As his career with General Motors was winding down, Gault started Gault Race Management in 1993, which quickly grew into a premier race organizing company, providing timing and results tabulation for dozens of events each year. That’s not to say the Riverbend Striders took off with ease – there were growing pains.

“It was a lot of work to organize the races and then get the word out in the days before the Internet and social media, so we actually went to some larger races to see how they ran things,” recalls Bauman, whose longevity in the sport is legendary and is competing in his 47th consecutive Boston Marathon next month.

Their first organizing effort was a ten-kilometer event in Flushing. “It was part of a summer festival and we got permission from the organizers to put on a road race and measured out a five-kilometer loop along the river, and the runners did that twice,” says the now 70-year-old Gault, whose running career began at Beecher High School. “We were able to add more races after that.”

Today, the club, which has about 25 members, holds training runs and walks every Wednesday evening from the Flint YMCA, and is organizing about a dozen races in 2016.

“The YMCA has become a great starting point because it’s easy to incorporate portions of the Crim Festival of Races [ten-mile] course, the Flint River Trail and the Genesee Valley Trail, which now can take you all the way to the Genesee Valley Mall,” says Bauman, once a 2:30 marathoner, who has also run all 38 Detroit Free Press Marathons and all 39 Crim races.

Riverbend Striders was one of the first clubs to organize longer races for women, who did not begin to race at distances longer than 1,500 meters at the Olympics until 1984. The club also sponsored the For Women Only race, which raised funds for The Shelter of Flint. They incorporated five-year age group awards, in addition to offering walking divisions at races. “The walking divisions drew people who otherwise probably would not have participated,” Gault says. “We could see there was a demand for them. I am pretty proud of the things we started at our races.”

Bauman’s business connections also played a major role in making the club’s races appealing. “We were able to give away nice awards like Gore-Tex suits and shoes to the age-group winners,” Bauman says. “We even awarded turtlenecks at races one year. Those things helped set our races apart.”

As a result, Riverbend Striders races started drawing runners from throughout the state, leading to top-notch competition. In fact, at the Christmas Stocking Race one year, 24 men and 21 women finished the four-mile event in under 20 minutes. The Riverbend Striders also played an instrumental role in launching the Crim Festival of Races in 1977, the result of an effort by former Michigan House of Representatives Speaker, Bobby Crim, to raise money for Special Olympics.

Gault helped map out and measure the course. The club was in charge of tabulating the results – by hand at that time, of course. Gault’s wife, Anne served as Crim Race Director from 1996 to 1999. “John really did a lot with finding the right course for the race when Bobby Crim and his people started talking to us about his idea,” says Bauman, who is marking his 50th year of competitive running in 2016. “There were some challenges on race day. They wanted a noon start like the Boston Marathon and it had been a cooler summer, but it was about 90 degrees on race day. I was also quick enough then to run the race and help score it afterward. I did that for several years until I became too slow, but the Crim people relied on us, especially in the early years of the race and we were able to deliver.” 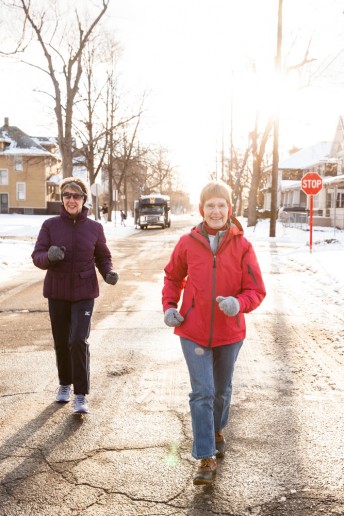 One of the many runners who has benefitted from the Riverbend Striders’ tireless efforts is inspirational late-bloomer, Rich Wallen, a retired Flint Northwestern High School principal and coach, who is still running marathons at age 76. His wife Jan, 75, is also a club member and still races at shorter distances.

“I joined the Striders about 25 years ago and was really able to step up my running and racing as a result,” says Wallen, who has run more than 100 marathons and plans to compete in the Glass City Marathon in Toledo, OH next month. “I ran some before I joined, but it was in a haphazard manner. I really got into running after I joined and learned so much about training, race strategy, improving overall health, and how nice the social aspect of running is. The club has been outstanding for me.”

Riverbend Striders membership benefits include race entry fee discounts, a ten percent discount on regular-priced items at Bauman’s, use of lockers and showers at the YMCA following Wednesday training sessions, membership in the Road Runners Club of America and regular club newsletters and information through e-mail. However, the club is in need of more manpower to continue its mission.

“We are in the process of finding new blood to help John and I keep doing the things we have been and take some of the load off us veterans,” the 66-year-old Bauman says. “I plan to stay involved in the future, but there has to be people in place to step up when John and I decide to step back.”

Anyone interested in joining the Riverbend Striders can visit riverbendstriders.com.