George F. Grundy II, Afghanistan: Operation Enduring Freedom, service-related disabled veteran and U.S. Marine, never imagined he’d have an address of his own – or be the founder of two businesses. Thanks to Genesee County Habitat for Humanity and General Motors, Grundy lives and works at 608 W. Court Street, where he is in the beginning stages of launching “The Home Advantage Group,” which is comprised of his photography business and is also is the hub of Veterans of Now (VON) – an organization which helps veterans reintegrate into civilian life. 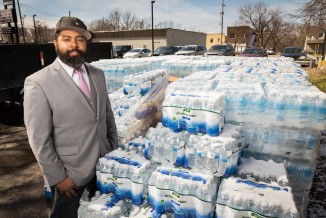 In addition, Grundy uses his centrally-located residence to help distribute bottled water to those in need. With the help of dedicated volunteers, he also assembles and distributes mini-care packages containing baby formula, diapers, wipes and other supplies he receives from local non-profit groups around the country that feel compelled to help mothers, fathers and children affected by Flint’s water issues.

As a Marine, Grundy earned the NATO Medal and Good Conduct Medal, and served as a combat logistics expert during his four-and-a-half year career, was actually homeless after leaving the military. “When I got out, everything was daunting to me,” says the Flint native and ’95 Southwestern High School grad. “Trying to figure out where and how to get the help I needed was overwhelming.”

For Grundy, reentering civilian life proved to be a dark time. “If I wasn’t built the way I am, I probably would’ve killed myself. I felt alone. Getting back to the reality of civilian life took its toll,” he says. He wandered and spent time in North Carolina before moving back to Flint. “It was definitely a time of growth for me,” Grundy says. “I knew in my heart that I needed to return to my roots – to Flint.” So he did.

Having acquired a little volunteer experience at Habitat for Humanity in Georgia, Grundy decided to walk into the office of the Genesee County Habitat for Humanity. “I was in the right place at the right time,” he says. Officials at Habitat were looking for a guy exactly like Grundy – a disabled vet who needed a place to live and work – to become the first recipient of a live-work space initiative geared toward veterans. The collaborative and generous efforts of GM and Habitat made it possible for Grundy to have a new start in Flint.

Although the process involved much frustration and many delays, Grundy is glad he didn’t give up on it. He put in many sweat-equity hours during the demolition and re-building phases, but obstacles seemed endless. 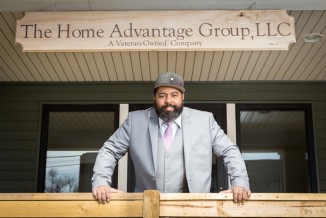 “After the fourth move-in date was announced and then canceled, I wondered if this was meant to be,” he says. But that’s when Chris Smith, another U.S. Marine veteran who was part of the Habitat construction crew, walked onto the scene. Smith was the sign of hope Grundy needed. Grundy felt renewed and destined to be the recipient of this gift of a home and a place to work – and to give back to the Flint community.

“When I learned that Habitat employed a veteran Marine, it was like I knew this was all going to be alright,” Smith shares. Smith and Grundy connected immediately. “George has an entrepreneur’s heart for sure,” says Smith, who served during the Bin Laden turmoil and now loves his carpentry work at Habitat. “He has a big heart for the city of Flint, too. When Habitat for Humanity partnered with George Grundy, I saw with my own eyes how all of this is meant to work – Habitat helps people have a home and more importantly, they give hope.”

Hope is what Grundy has for Flint, fellow veterans, neighbors and his own photography business (which he says is in its infancy). A developing love for photography and capturing moments on film stemmed from his military travels. “I was always trying to capture moments at all of the different places I went, because I knew I’d never get an opportunity to go back.” His photographic memories of other cultures such as Germany, Japan, Manas and Afghanistan give him motivation for his hobby-turned-business photography studio in his new home. To improve his craft, he is enrolled in a Mastering Digital Photography course offered in Brighton – free to vets through the Veterans Vocational Education and Training (V-VET) program. “The course is helping me learn the science and theory behind photography,” he says. The mission of V-VET is to help veterans learn skills to assimilate into non-military life.

Grundy is learning technical photography skills such as lighting, exposure, shutter speed, composition, range and more. He’ll be taking field trips and getting photo assignments with other veteran-learners in his class. Working with V-VET coordinators through VON to get more opportunities for Flint veterans, he is learning as he goes.

“At this point in my life, I try to get wisdom wherever I can,” he smiles. That includes networking with other veterans – especially Vietnam vets in the Flint area who meet monthly. “I’m humbled in their presence,” he says. “They’ve been through much worse than I have. They returned home from a war and were verbally abused and spit on. Surprisingly, some of them are only just now getting the proper documents and benefits they deserve.” 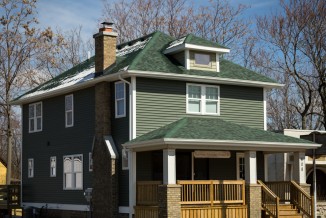 Settling back into Flint gives Grundy the meaning he’s been searching for. “I have a deep appreciation for Flint’s history and heritage,” he says with pride. His father, George Grundy, Sr., successfully operated Grundy’s Collision, a long-time business on Saginaw Street. “Flint is where the standard of living, earning a good wage, vehicle technology and housing laws improved because of things like the sit-down strikes and those who came before me who contributed to Flint.”

Grundy is combining everything he loves into his new career. He believes in Flint. He is passionate about helping veterans who need help within 24-48 hours of asking for it. “If I can help another veteran get a grip on life and navigate through tough times after leaving the military, then I’m doing what I was meant to do.” 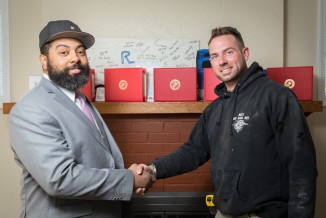 The need for funding to help other vets through VON is ongoing, so Grundy is planning events such as a community rummage sale and a veteran-based art therapy program which will take place every weekend this summer, right up until Back to the Bricks.

“Being located here in the heart of the city is great,” he says. “I extend an invitation to all of the local businesses and colleagues in the area to help make a difference, get involved and work to help move Flint forward.”