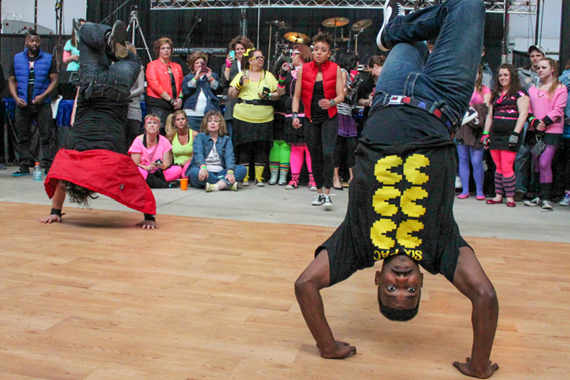 Jared and Alisyn Hurd are nothing short of a manifestation of art. It is difficult not be taken in by their style of dress, rhetoric, humility and inclusive nature. They are unique but not eccentric, palatable and alluring. Indeed, if this can be said of their very being, then the question one might ask is, “What is it that they do?”

The Hurds are the creators of the Vertical Ambition Dance Company. Vertical Ambition is unique in that it is one of the nation’s few hybrid dance companies. Hybrid companies incorporate two or more major dance styles in their instruction and presentation. Jared and Alisyn specialize in Hip-Hop and Contemporary dance respectively, and the confluence of these two streams of modern dance is a wonderful sight to behold. The two met at Modern Messages Dance Company in Highland, MI. They both started working there on the same day and were naturally drawn to each other, but the story doesn’t end there with “and they lived happily ever after,” mainly because they simply weren’t that happy at one time.

During their first year of marriage, the couple taught dance part-time and worked full-time as janitors in a Novi business park. They made a decent living, and were proud of the service they provided, but the demands of work at the business park would ultimately wear on their relationship. During this trial, the couple says they “realized the importance of doing what you love.” As Jared and Alisyn approached their one-year wedding anniversary, they decided to take the risk of pursuing full-time dance careers. In 2008, Vertical Ambition was born. When reflecting on that trying period, Jared poignantly states, “We have the benefit of having loved each other through the difficulties.”

The complications didn’t stop there: the transition into full-time dance instruction and performance proved a rocky road, as well. They started the company in Jared’s hometown of Ypsilanti, where space for performance was made available to them in a church; however, this venue would be just one of several places that the Hurds would call a temporary work home. Other venues included Wayne State University, which was made available to them while they partnered with a friend and fellow dancer who studied there, and Community High School in Ann Arbor during Alisyn’s short tenure as a dance instructor there. Once they moved to Alisyn’s hometown, Flint, the couple began to get a sense of permanence at Mt. Zion Church in Clarkston and at the Flint School of Performing Arts. They currently instruct nearly 400 students, and have taught thousands over the past five years.

Using someone else’s space for classes is a double-edged sword, and since the couple is confined by their landlord’s hours, Jared and Alisyn’s latest mission is to open a dance space in Flint for local youth who are looking to pursue dance without impediment. Jared says, “There are all these kids out there ‘getting down,’ but they don’t have anywhere to get down.” They would also like this space to act as a centralized location for all the pockets of dance in Mid-Michigan. “The dance scene is isolated in specific regions,” says Alisyn. “Things are going on in Ann Arbor and in Grand Rapids, but not in Flint.”

It’s inspiring to see a young 20-something couple like the Hurds chase and fulfill their dreams while encouraging others to do the same. It is also inspiring to know that their dream has been made a reality in Flint. There are full-time writers, dancers, artists and musicians alive and well in our city – one that some would have people believe is completely devoid of hope. The Hurds are that once-rare-but-no-longer case of how you really can live your dream, even in Flint … especially in Flint.