One of the biggest boosts to an acting career is to play against type. That’s how perennial gangster James Cagney won an Oscar as song-and-dance man George M. Cohan, how Tom Hanks broke out of the light-comedy mold with Philadelphia and Forrest Gump, and how Leslie Nielsen got a late-in-life second wind from the lowest-common-denominator humor of the Naked Gun films.

If you’re Steve Carell, and you’ve done the sitcom thing and played the funnyman on the big screen, you’re savvy enough to disappear into the scary persona he takes on in Foxcatcher. Carell spent about three hours daily in the makeup chair to become John E. du Pont, the real-life multi-millionaire who becomes a financially generous – but mentally unstable – mentor to Olympic wrestler, Mark Schultz (played by Channing Tatum).

Made up with a prosthetic nose, thickened jowls and pasty-white skin, Carell pulled off the role well enough to earn his first Academy Award nomination, for best actor. Also Oscar-nominated in this intense fact-based drama were Mark Ruffalo as best supporting actor, and the film’s director, Bennett Miller, for his screenplay. You can see Foxcatcher March 13-15 in the Friends of Modern Art film series at the Flint Institute of Arts.

The FIA also will present an Oscar nominee for best documentary, CitizenFour, coming March 20-22. In this controversial film, CIA analyst-turned-whistleblower Edward Snowden is the subject of a series of remarkable interviews. 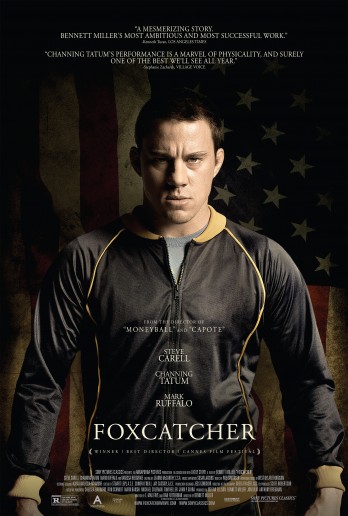 Distinctive English director Mike Leigh and his frequent lead actor, Timothy Spall, team up in Mr. Turner, playing at the museum March 27-29. This account of the final 25 or so years in the life of the brilliant but uncompromising British painter J.M.W. Turner earned Oscar nominations for cinematography, costumes, production design, and original score.

Also on the FOMA series slate, on March 6-8, is Beloved Sisters, a German romance about the unconventional relationship between two sisters and the 18th century poet and philosopher, Friedrich Schiller.

All FOMA series screenings are at 7:30pm Fridays and Saturdays and 2pm Sundays. Tickets, available at the door, are $6 general admission, $5 for FIA members, and $4 for FOMA members. For more details, call the FIA at 810.234.1695 or visit flintarts.org.

The FIA also is honoring films made in, by, and about the people of India with a special Bollywood Film Festival starting in March, with screenings at 7pm Thursdays and 5pm Sundays. The series launches March 5 and 8 with Jadoo, a British-Asian “foodie” comedy about the rivalry between two chef brothers.

Also upcoming in the Indian series are Siddharth (March 12 and 15), Dilwale Dulhania la Jayenge (March 19 and 22), and The Hundred-Foot Journey, starring Helen Mirren (March 26 and 29). For more info on those films and others, visit flintarts.org.

Admission to the Bollywood festival screenings is free for FIA members and college students with valid ID; others can get in for $5 at the door. ♦