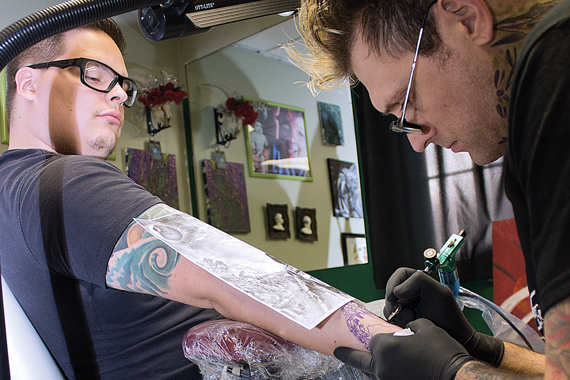 Spike TV’s Ink Master is a reality television show that pits tattoo artists from all over the United States against one another in a series of tattoo challenges. As the show progresses, those who can’t cut it are eliminated, and one person is finally crowned the Ink Master.

My City Magazine was privileged to catch up with a recent participant in the third season of Ink Master, local tattoo artist Kyle Dunbar of Almighty Tattoo in Flint. Fresh off a fourth place finish and just before departure for the recording of the fourth season which will air early this year – he is back by popular demand – Dunbar answered some questions from this faithful viewer of the show, who was itching to get the details on what it was like to star in what was deemed “the number one original series on all of cable” in 2012.

Where are you originally from?

I’m from Flint. I started out in Beecher schools, but my family moved and I graduated from Kearsley High School.

When did you start tattooing?

I started when I was about 22 years old. After doing some work, I landed my first professional job a few years later, and now I’ve been at it for almost 20 years.

What do you like most about the art of tattooing?

I like creating something. I usually need someone to get me started with an image, because without that I won’t start anything, and I’ll just stare at the canvas.

Did tattooing come from being an artist?

I’ve been drawing since I was six years old, and I always received some type of praise for it.

What do you like about practicing tattoo art in Flint?

The people are cool. Flint really does have a unique set of people. They are tough and they are resilient, and they are down for you. I think it’s harder to get some press if you’re from a bigger city. But I get a lot of press from people in Flint. For my buddy on the show from California, the people back home weren’t impressed. To them, it’s just a reality TV show.

How did you get the chance to be on Ink Master?

I tried out twice the year before I made it; I went to New York and then to Austin, TX for the casting calls. The next time around, the auditions were in Chicago. My wife was like, “It’s only six hours. You gotta go.”

When I got there, they asked me about my job and my family. They want to know every little thing about your personality. I had some Jaeger and Guinness in me, and I just let loose. They loved it, you know. They liked my “conflict ability.”

I told them how I made myself. That’s kind of a Flint thing, you know? How are people still here? It’s something about Flint. We survive. They liked that.

What is the main thing you took away from being on the show?

I’m a better artist now. The tattooing principles that Dave [a judge]and others had suggested are tried and true. Many people think there are just two styles: cartoony and realistic. But now, I just see my work as illustrated. I can do much more now.

Was Josh [a disagreeable contestant]really the jerk he appeared to be?

You’d like him behind the scenes. He’d act one way when the cameras were on and then differently when they were off, which wasn’t cool, but he thought that was the way to win.

What was Dave Navarro [one of three judges and former Jane’s Addiction band member]like?

Dave was surprisingly human and super cool. He was not a prima donna at all. He made himself accessible, but the producers of the show wouldn’t let us interact with him.

They film for a 16-hour day in two shifts. There’s a lot of waiting and stupid stuff. They would catch me rolling my eyes and it was usually about something else not seen once the show aired. I asked one of the production guys how much footage they use and he said it’s about 162 minutes of filming for every one minute used. For instance, when you see the critiques of our work for only 15 seconds, those critiques were a lot longer.

What’s the plan for Round 2?

I’m giving simple tattoos. They don’t want to see too much detail. They’re looking for the most versatile artist, not the one with the most technique. At least I have the support of people in Flint when it comes to voting – I know I’ve got that part covered.

Finally, what are your goals as an artist now?

I’m trying new styles. I’m figuring out a style that I like and going with it. I want people to recognize my work.

It is super cool to be able to ask questions of someone you just spent months watching on television. Kyle later invited My City to the parlor to see him work, and we of course obliged. Check out his shop and be sure to watch Kyle do his thing on the upcoming fourth season of Ink Master on Spike TV.

Are you interested in purchasing photos from this story? Go HERE and select the “Almighty Tattoo” category.