Judge John L. Conover has always been known for his lively sense of humor. He has taken that sense of humor to co-write a book with his wife, Karen. The book, entitled Off Balance, is a humorous view of life in the courtroom, based on stories he compiled during his two decades serving as a Genesee County District Court Judge. “People like to laugh,” smiles the judge. “I try to make the courtroom as relaxed as possible, so I always start the day with some light-hearted humor.”

Judge Conover was born in Southern Illinois, and spent every summer on his grandparents’ farm in a tiny, agrarian community. He says that, except for hard work, there wasn’t much to do on the farm, so his grandfather would take him to the “big city” of Danville, IL to watch local attorneys and judges try cases and mete out justice. “The only TV show we watched was the Walter Cronkite news,” he laughs. As a boy, he was captivated with the formality of the court and the sternness of the judges in their black robes. “It was fascinating stuff. There was an exciting world of drama and suspense playing out right in front of me, and I wanted to be a part of it.” 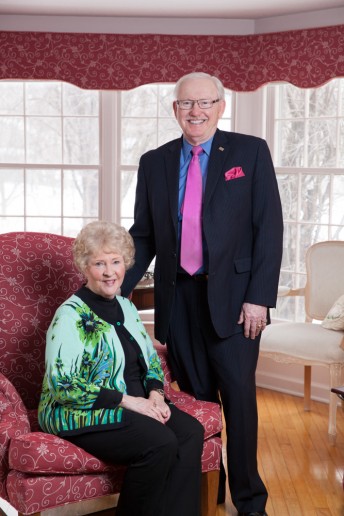 According to the judge, life was a different back then – slower paced. There was no work on Sundays, and after church they sat around making ice cream and listening to St. Louis Cardinal baseball on the radio. On rainy days when they couldn’t work, they would go to town and sit around an old pot-belly stove and listen to old-timers argue, discuss politics and “philosophize.” “It was a perfect place to learn lawyer skills,” says the judge. “Many of my values and my worldview came directly from those wind-swept crop lands and the honest people who still feed the world.”

Judge Conover’s father most influenced his early life. His father’s youth was spent struggling his way out of the Great Depression. “He lived on cold bean sandwiches just to get in a few semesters of college,” says the judge. “But he always maintained a great sense of humor, read voluminously, and could see an amusing angle in the darkest of circumstances. He treated every person with kindness and respect.” Karen has also been a major influence in the judge’s life. “My wife has been my friend and soulmate in raising a wonderful family and creating the stable foundation for me and our children to succeed in life,” he says. “She has always been my sounding board, confidant and helpful critic. She has been my rock of support for more than 50 years.”

The judge says there is absolutely nothing about his job that he dislikes. “It’s like playing the championship game every day,” he says. “It’s exciting, it’s tense. People’s lives are often enormously impacted. They come expecting justice, whether they are defendants or plaintiffs – defense attorneys or prosecutors. You have to be prepared, you have to know the law, and you have to read people. It’s my challenge to deliver my absolute best every day.”

Judge Conover credits his upbringing for his unique sense of humor, quick wit, and wisdom in dispensing tough-but-fair rulings. He dealt with cases from simple misdemeanors to the most heinous felonies – and from farm animal disputes to child torture and murder. He was set to retire in 2014 due to age limits for Michigan judges. “I was forced to retire from a job I vigorously enjoyed all twenty-two years,” he says. But before his retirement, he was asked by Lapeer County to sit as a visiting circuit court judge (there is no age restriction for visiting judges). He has been there ever since, still collecting funny courtroom tales. He believes the stories in the book portray a message of underlying values.

The judge kept journals for years, writing down the funny situations he had witnessed and, admittedly, about some funny situations he created. Karen, who is a writer and retired English teacher and professor, gathered the writings together and they co-compiled them into a collection of about 175 funny stories and anecdotes for the book. “It was a painstaking, lengthy project,” says Karen. “He provided the stories and I did the crafting. It took about four years to write.” According to Judge Conover, the book has been in print for about a year and has done very well. The cover photo was taken during a Night Court session. Off Balance has also received many good reviews.

The Conovers both enjoy public speaking, and they do many speaking engagements and book-signings all around the state. “We’ve had a blast doing our presentations,” says the judge. “My wife calls it: ‘Irma Bombeck meets George Burns.’” Off Balance has a five-star review on Amazon. “It’s my hope that our book is one way that I can make life a little more enjoyable for someone,” says Conover. “Our presentations are a lot of fun and they help sell the book,” Karen adds.

What are the judge’s plans for the future? “The word ‘retirement’ does not exist in my vocabulary,” he says. “I have always done what I enjoy most and never stopped feeling privileged to do it. I am blessed with great energy and – my wife says – a photographic memory. Defendants and defense lawyers often rue my long memory when they pretend that I am looking at a ‘first offense.’ My wife says I can’t retire and enjoy my hobbies, because my ‘hobbies’ are putting bad guys in jail, shocking young offenders onto better life paths, seeing that the law is followed with a big dose of common sense, and having people stand when I walk in the room!” Karen says he can be assured the last one will definitely not happen at home.

The Conovers are very active in the community and the judge volunteers three nights a week at the Wellness Center in Davison. In his spare time, he is an avid hunter. The couple also enjoys spending time with their six grandchildren. Will he be writing another book? “I am always collecting amusing anecdotes that seem to follow me around,” he says. “I certainly have enough material for another book. We’ll see …”