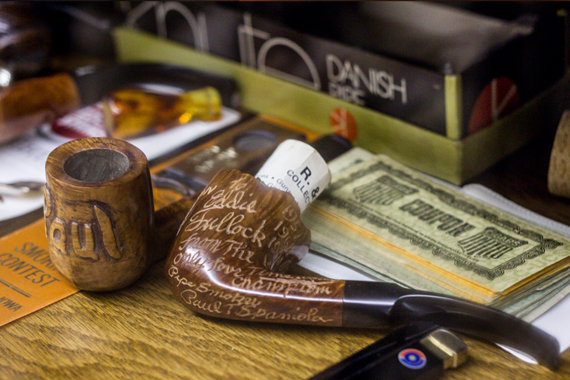 The sweet, rich scent of tobacco fills the air at Paul’s Pipe Shop and Pipe Hospital in Downtown Flint. While owner Paul Spaniola spends most of his time these days at his home in Swartz Creek, every nook and cranny of his shop is filled with tidbits, treasures and fond memories of his long and interesting life. The hallway wall is plastered with photographs of Paul with local and national celebrities, including Michigan Gov. William Milliken, actress Susan Hayward and sports legend Billy Martin, to name just a few. The upstairs museum is home to Paul’s private pipe and memorabilia collections. Paul’s son, Dan Spaniola, shared details of his father’s unique life with My City Magazine.

Paul became an entrepreneur at 15 years old. His dad owned a fruit stand and would often take Paul out of school to purchase produce in Detroit by horse and buggy. Because of all the time he missed, the nuns at the Catholic school told Paul he may as well quit; so in 1928, his father helped him set up a business: a pool hall and tavern in Morrice, MI. Paul moved his business to Swartz Creek in 1930, when it became Paul’s Tavern and Pipe Shop. In 1944, he moved the shop to Downtown Flint and in July of this year, Paul celebrated 85 years of business.

How did the pipe business start? “He got in this business over a ten-dollar bet,” reports his son. A pipe salesman bet him he couldn’t sell 12 pipes and of course, Paul told the salesman he could sell anything. He accepted trade-ins to sell the pipes and won the bet, leaving him with ten dollars and a number of used pipes. “This is when he really got interested in the pipe business,” said Dan. Paul started making pipes and blending his own tobacco, which tasted terrible because he was never a smoker. Accordingly, he began smoking pipes, and his tobacco blend became very popular. Paul named his pipe brand Cayuga, a Native American name because it was the Native Americans who first smoked pipes. Cayuga pipes are oil cured by a special process at 410 degrees Fahrenheit to mellow the briar and open the pores. Oil curing makes the pipe lighter in weight, as well as making the smoke cooler and dryer. This pipe brand is still sold today.

According to Dan, his father “has seen and done it all.” He made it through the Great Depression, was married twice and fathered 11 children. He now has 187 grandchildren, great grandchildren and great, great grandchildren. He learned to play the mandolin, guitar and accordion. “That is how he met my mother, Leona,” says Dan. “She skipped school to marry him,” Dan laughed. They got married and then went and told her folks. Leona’s Dad wasn’t too fond of Paul at the time, but when he died, Paul was the one he asked for, Dan remembers.

Paul is proud to be a six-time World Pipe-Smoking contest winner, with a best time of 98 minutes and 53 seconds. Dan reminisces about when his father went to Hollywood in the early 50s for the filming of The President’s Lady, a movie about President Andrew Jackson and his wife, Rachel. Because Paul was the world champion pipe smoker at the time, he was asked to teach Susan Hayward how to smoke a pipe for her leading role in the film. When asked how he remembers Susan Hayward, he said with a wink and a smile, “She was a beautiful girl.”

Because of his tobacco industry involvement, Paul was also commissioned as a Kentucky Colonel in 1987. He traveled to Europe at the invitation of the wife of Alfred Dunhill, the maker of Dunhill pipes, the finest pipes in the world. Paul was a good friend of Charles Stewart Mott, whose pipes are now part of Paul’s prized private collection in the museum, including Mott’s hand-carved Meerschaum pipe, which is pure white. When smoked, the pipe turns to a gold-brown color.

“He has seen a lot of things, but you’re bound to see a lot when you live to be 100,” Dan smiled. The pipe shop is still Paul’s passion. In January, he celebrated his 100th birthday with cake and coffee served at the shop, and enjoyed visits by well-wishers from all over the area.

Dan retired from the Genesee County Sheriff’s Department a few years ago and started working at the shop with his father, and has now taken over the day-to-day operations, as well as the pipe-making and repair. Paul was at home when My City Magazine stopped by recently for a quick visit. His pure white hair is strikingly thick, his sense of humor sharp. He loves to tell jokes and play cards and while he doesn’t smoke a pipe right now, he says he’d like to. “It was my life,” he said with a sparkle in his eye. “It gives people comfort.”

Are you interested in purchasing photos from this story? Go HERE and select the “Paul’s Pipe Shop” category.