When Shekinah Wagner was a little girl, she knew that when she grew up, she wanted to work with animals. She always loved cats, animals and reptiles but was completely obsessed with tigers. Born and raised in Flint, she graduated from Carman-Ainsworth High School and obtained a degree in science and zoology at Michigan State University.

Wagner now teaches eighth-grade students at Genesee Stem Academy in Flint and is the founder and owner of No Two Stripes Alike, a company that allows her to use her passion for animals and reptiles to educate community members. Her mission is to help kids get comfortable with a variety of species in an interactive way.

“I always knew I would work with animals,” Wagner admits. When she was in the 11th grade, she went to the Genesee Skill Center and took a class about business etiquette. The assignment was to create a business plan, which was when her vision for No Two Stripes Alike (N2SA) was born.

Did you know that no two tigers have the same stripes? According to Wagner, tiger stripes are like human fingerprints and no two animals have markings in the same pattern. This is the meaning behind the name of her business. And, her goal is eventually to get a tiger! 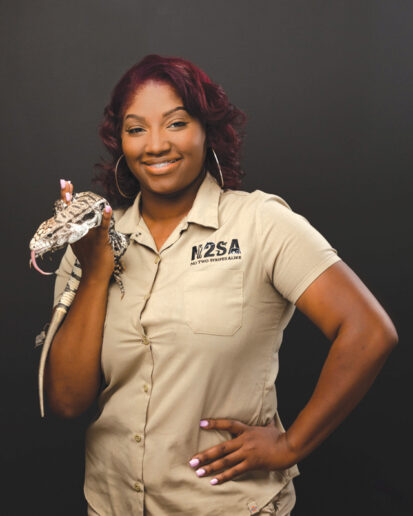 N2SA currently houses 12 creatures – turtles, a small alligator, snakes, spiders and more – that she takes to various community events to interact with the public. “We offer a wide variety of experiences,” the zoologist says. It is her belief that hands-on experiences help humans better understand animals and their needs. Wagner currently houses most of the creatures at her home and the larger ones in a space that will soon be opened to the public.

In its five years, N2SA has hosted many annual events. “I actually came out of the field to teach,” she reports. She previously worked at Potter Park Zoo in Lansing as an animal caretaker and has past experience in the field at various other locations.

Along with community events, N2SA will set up displays at private functions such as birthday parties, showers and more. “It is a teaching experience,” Wagner says. “I let people touch the animals and we tell them about each one. It’s very immersive. People love it!” As an example, Wagner has been invited to bring animals to a private birthday party for the last couple of years. One of the more popular animals is a red-tailed boa constrictor. “Amy grew 1.5 feet in a year!” Wagner exclaims. “It was interesting to everyone to see how big she has gotten.”

Videos of the animals can be viewed on Wagner’s and N2SA facebook pages. Whenever the zoologist gets a new creature, she offers internet viewers an opportunity to name it. “All of our animals have names,” she says, “and the public has chosen them.”

As a zoologist, Wagner studies animals in the wild and in captivity and teaches what she has learned. While she loves teaching her students during the day, her passion is the animals. What does she like best about it? “From a conservation standpoint, I like exposing people to animals and educating them. Honestly, I like it when people say, ‘Oh, I didn’t know that’ or, ‘I didn’t know the animal would feel like that.’ I truly enjoy the one-on-one conversations.”