Sometimes when a unique opportunity falls into your lap, it’s best to pick it up and run with it – even if you don’t know what’s coming next. After turning it down three times, Greg Gaines reluctantly agreed in 1990 to direct the Mr. Rogers Garden Program.

Employed at General Motors at the time, Greg initially had no desire to do it – and he knew nothing about gardening. “I didn’t know a green from a weed,” he says. With assistance from a master gardener and other adult volunteers, he was able to bolster the Mr. Rogers Garden Program, gaining interest from Flint-area youth and, over time, obtaining necessary materials including a shed, gardening tools and equipment, a hoop-house and chicken coop. “We’ve probably put over 4,500 kids through the program,” he says. “Some come back and supervise. A lot of them stay from age 14 until they graduate from high school.” 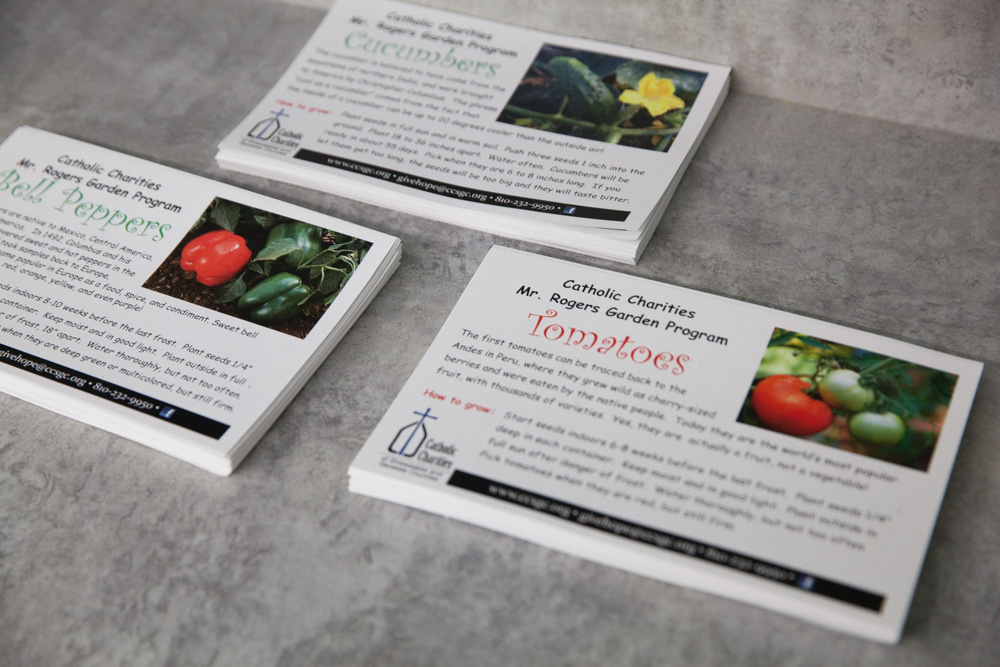 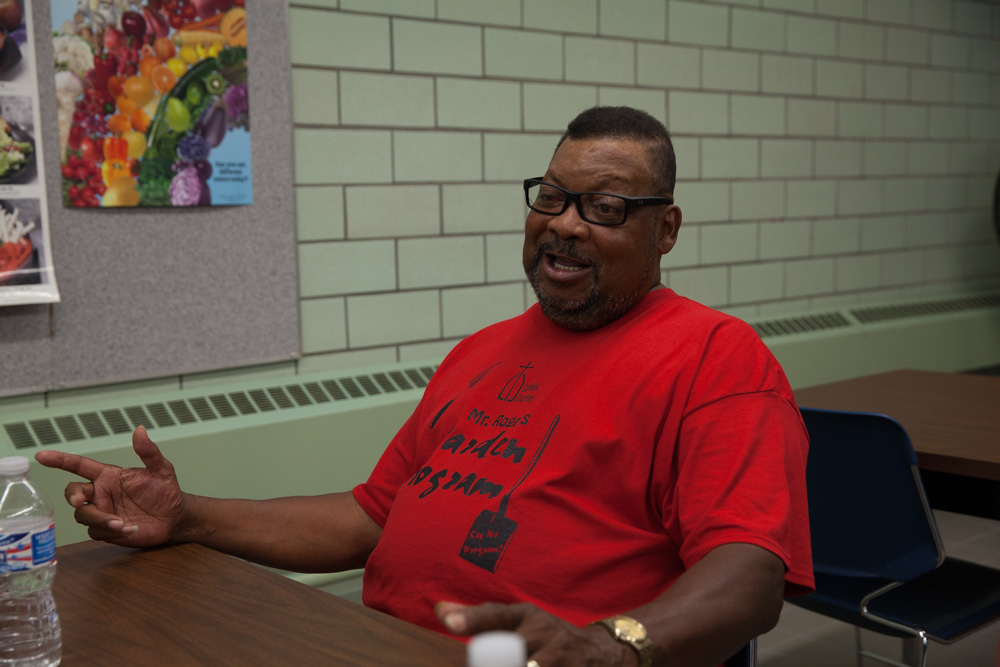 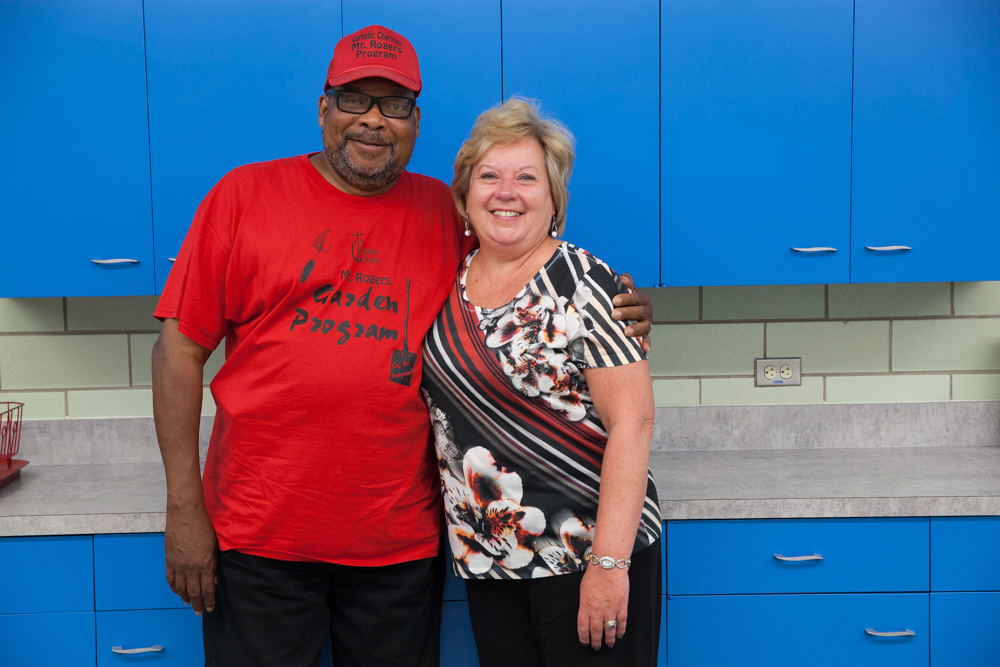 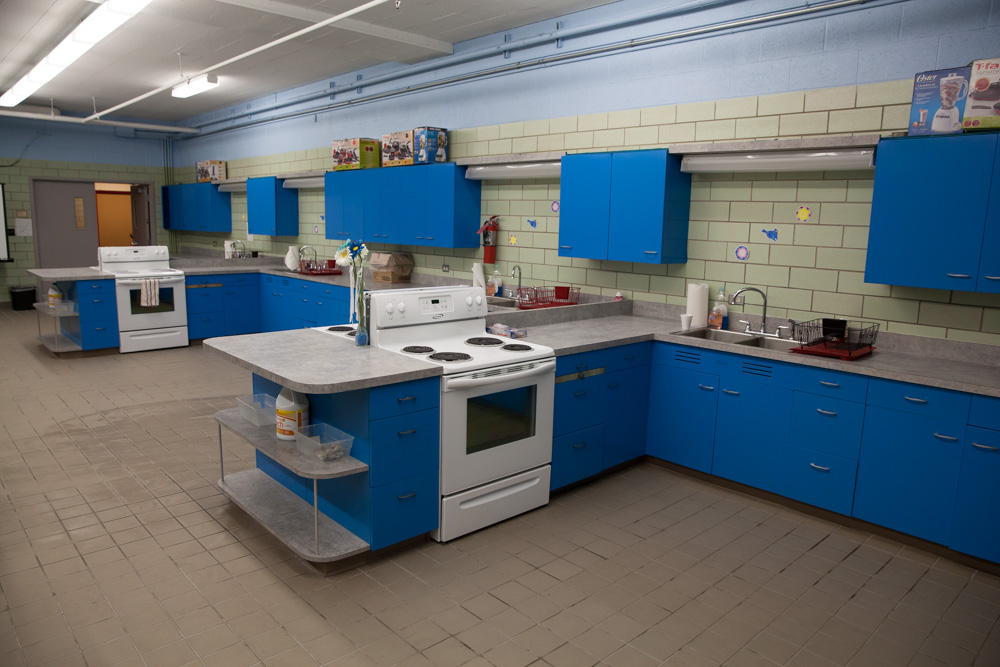 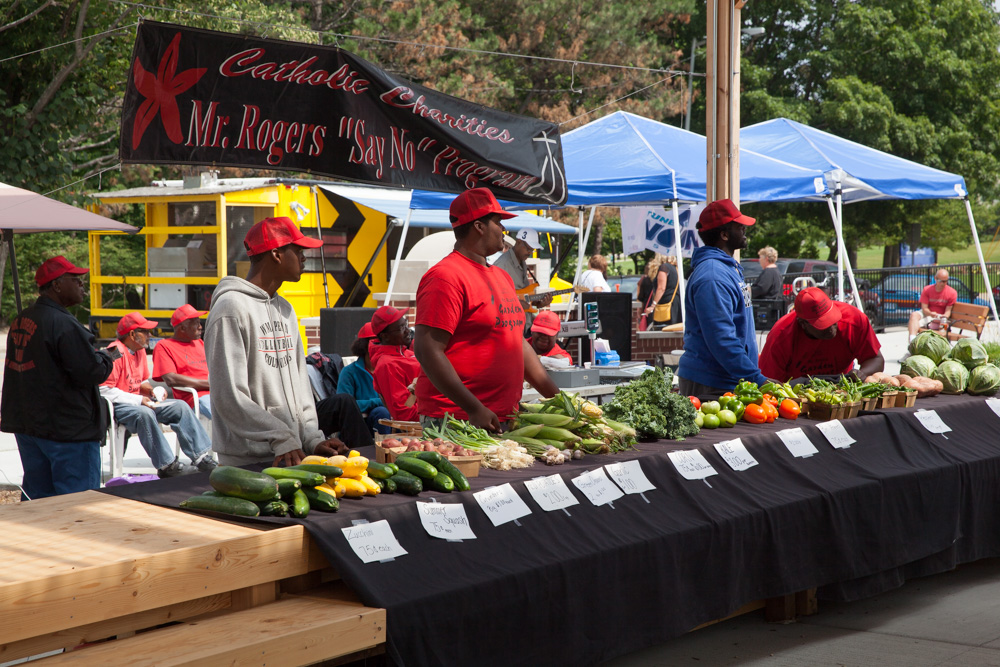 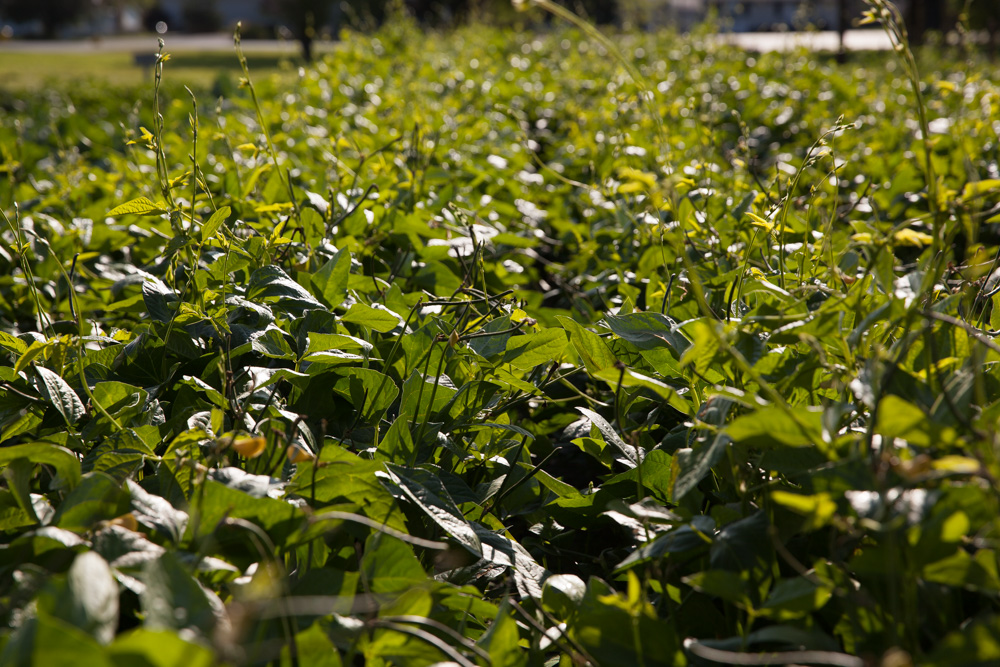 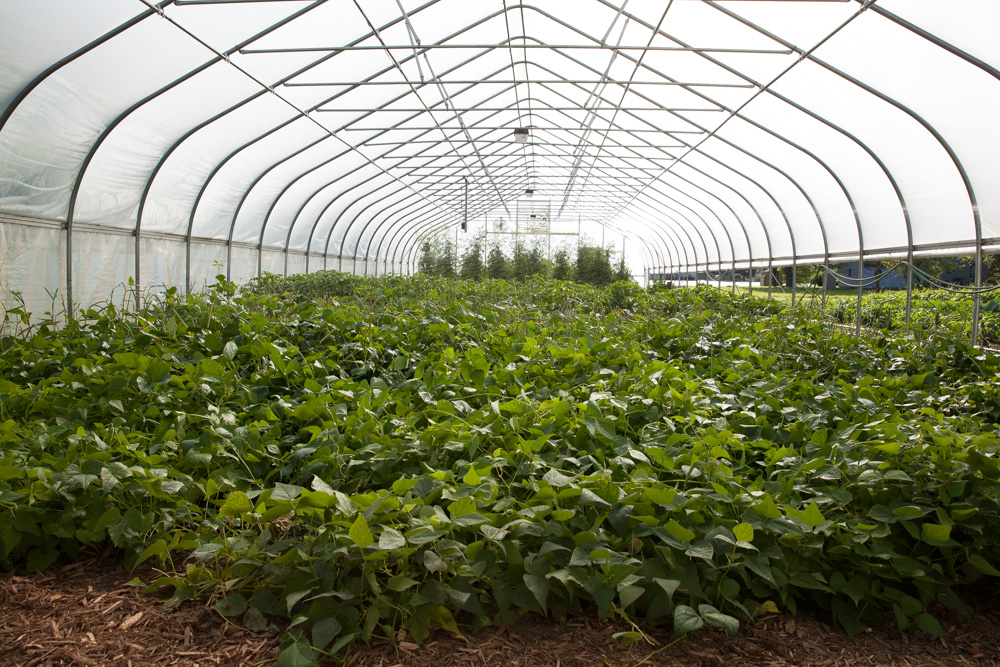 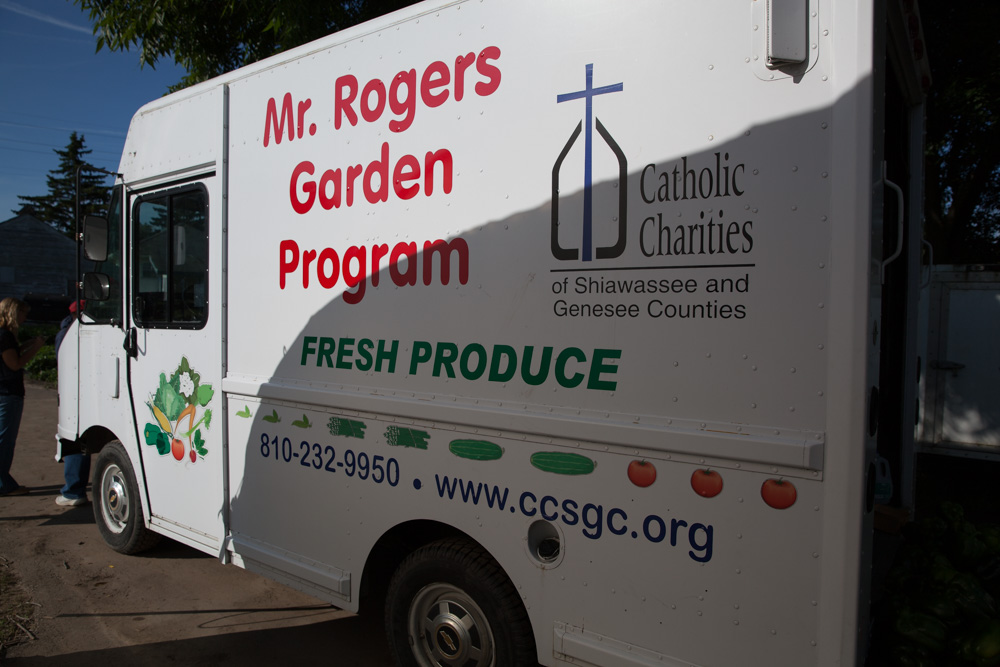 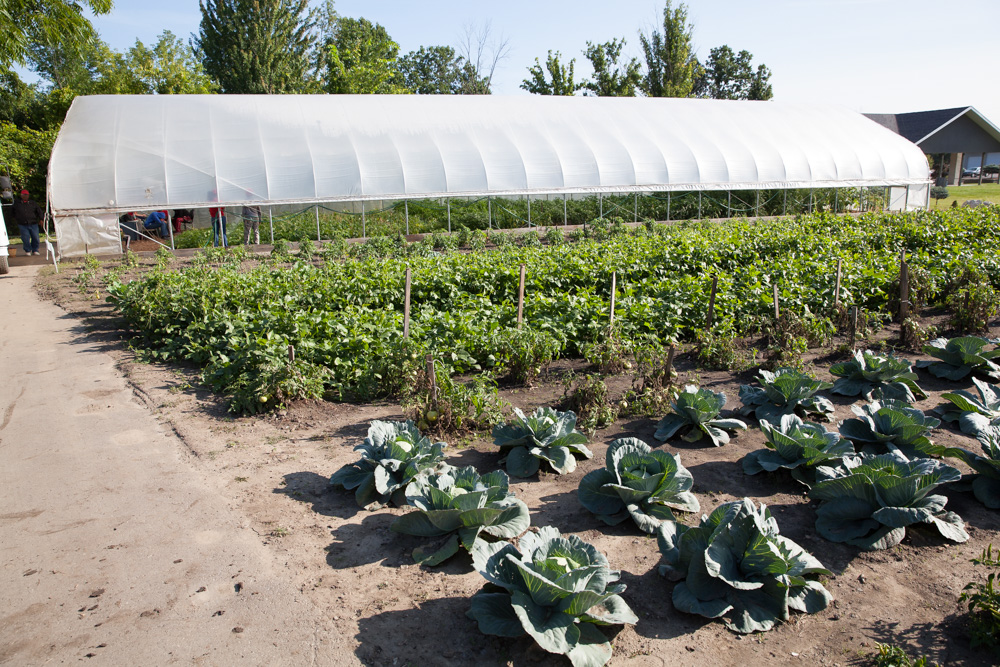 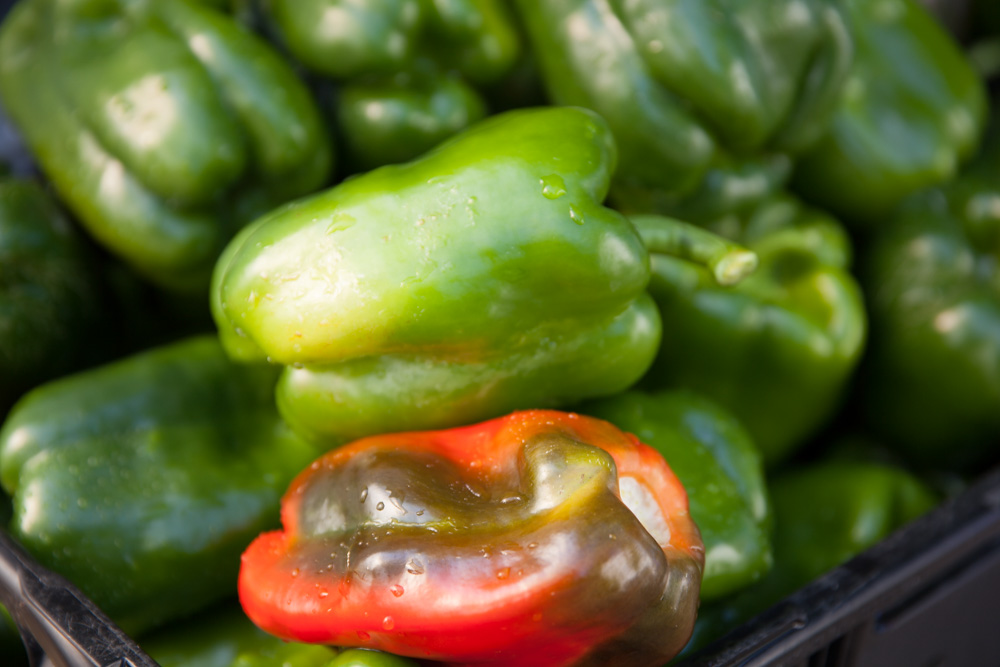 Greg’s work mentoring at-risk youth has recently paid off with state-wide recognition. Earlier this year, MSU presented him and the Mr. Rogers team with the Farmer of the Year award. “If you had told me 25 years ago that I’d be doing this today, I’d have said you’re crazy,” Greg laughs. “But when you find your purpose and what God has put you on this earth for, you’re well-satisfied. I realize now that this is my purpose. I’m here for these young people.”

The program was originally developed by Wendell Rogers, a former Michigan corrections officer who wanted to reduce the number of young men entering the correction system. Under Catholic Charities of Shiawassee & Genesee Counties since 2006, today the Mr. Rogers Garden Program provides a positive place for Flint-area teenage girls and boys to spend their time during the summer months, learning the process of growing vegetables from seedlings to harvest time while gaining valuable job skills and income. Many youth are hired through the spring Baker College Job Fair and take part in Teen Quest from the Genesee Chamber of Commerce during the school year. Last year, the program had a total of 92 students.

Gardens are tended at Ebenezer Ministries in Burton and Our Lady of Guadalupe Parish in Flint, as well as Streeter Farms in Davison and a few other sites. The kids started taking their produce to the Flint Farmers’ Market around 1992. The group also does landscaping projects, taking care of all of the gateways and medians around Flint.

In 2009, the program received a grant from the W.K. Kellogg Foundation, and a spiffy produce truck was purchased to transport produce to area senior centers. The program also receives support from local resources including the Ruth Mott Foundation, Genesee Regional Chamber of Commerce and Genesee Health System. A grant was provided by the Flint Rotary Club to renovate and add equipment for the culinary room, a former home-ec room at Catholic Charities in Downtown Flint where Greg and other adults, including trained chefs, teach the kids how to prepare and cook the food they’ve raised. They learn about nutrition, how to read a recipe and safely prepare food, and they gain confidence with cooking balanced meals.

By the end of the season, they’re able to cook a meal on their own for their family. “If they go home and cook this meal, that shows they paid attention in class,” Greg says. 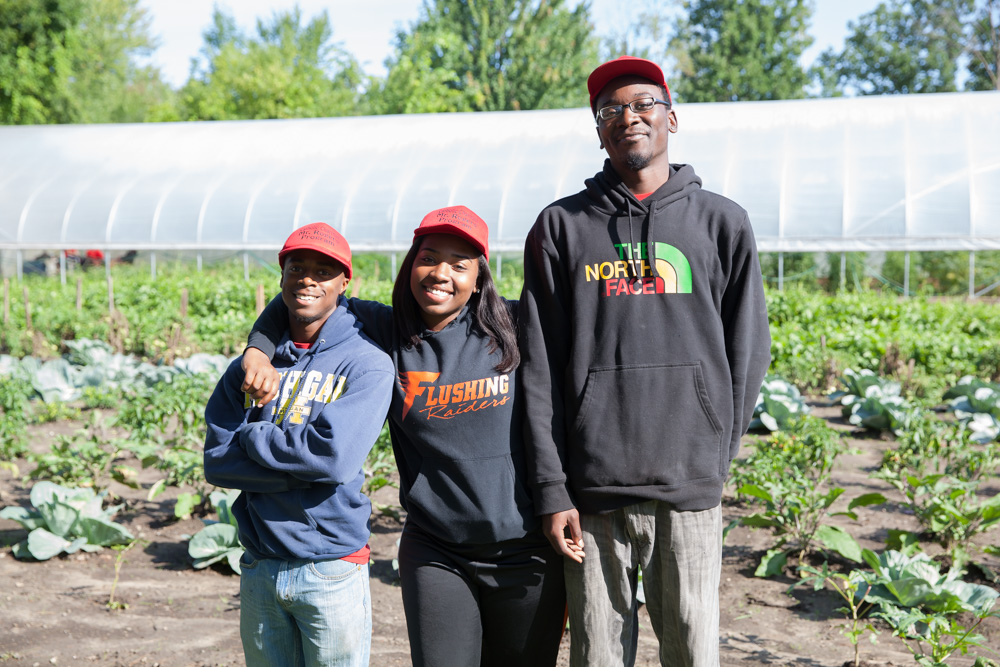 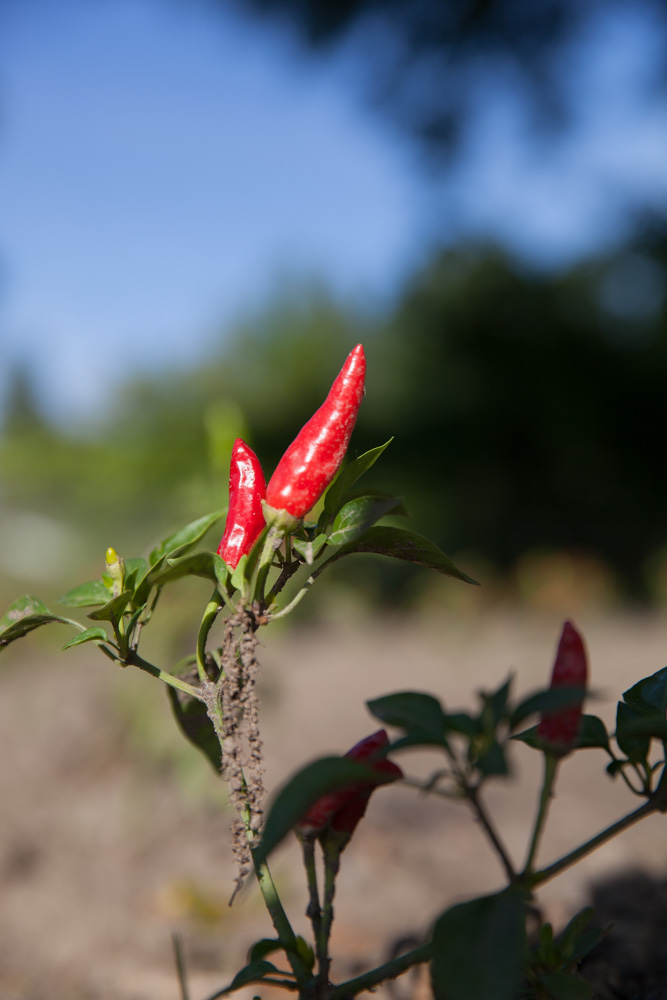 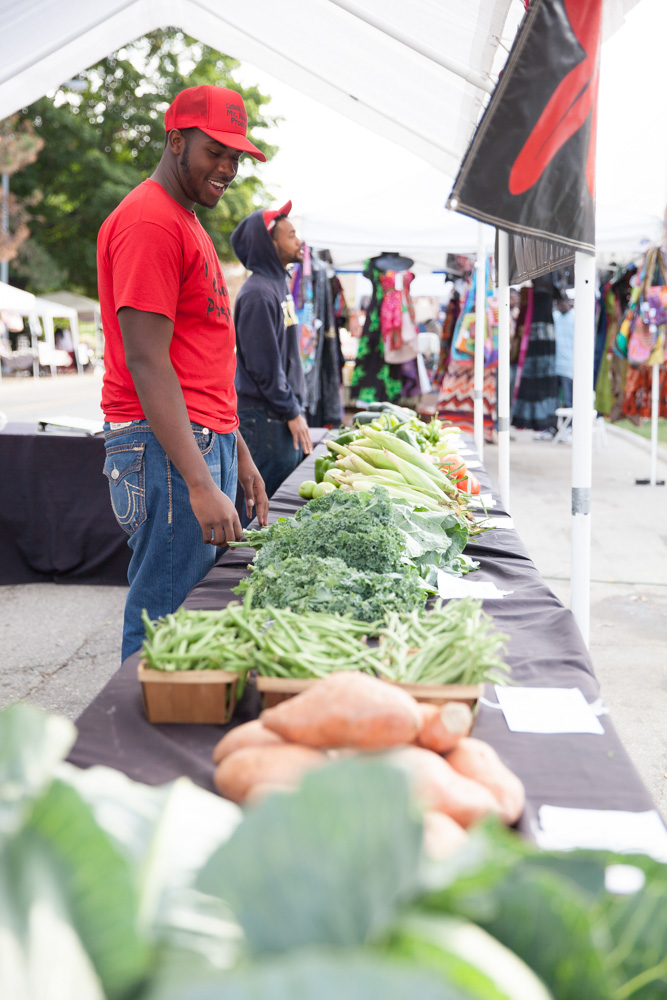 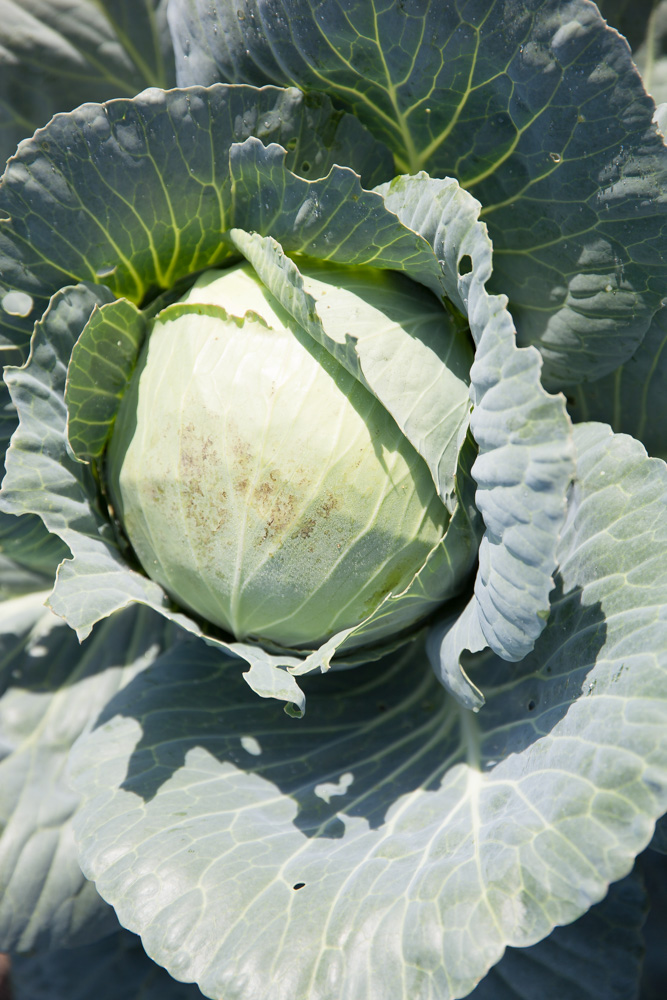 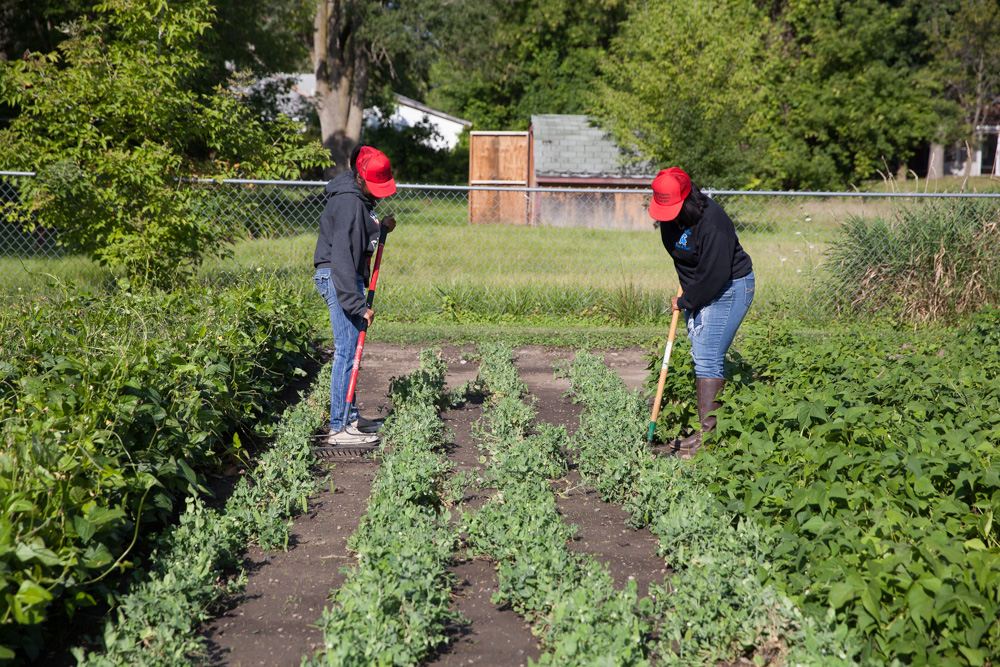 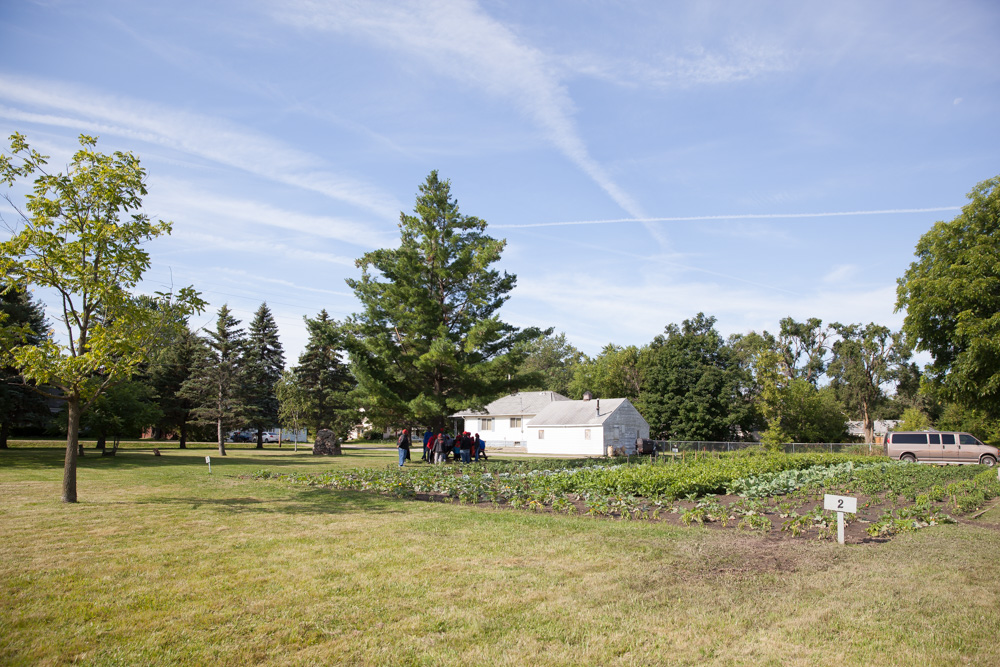 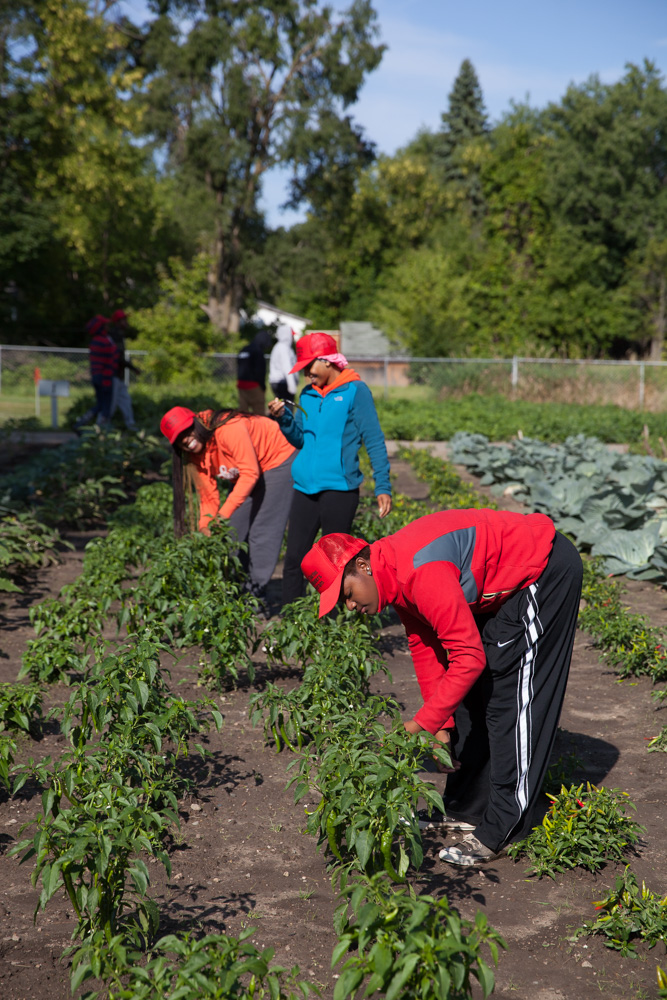 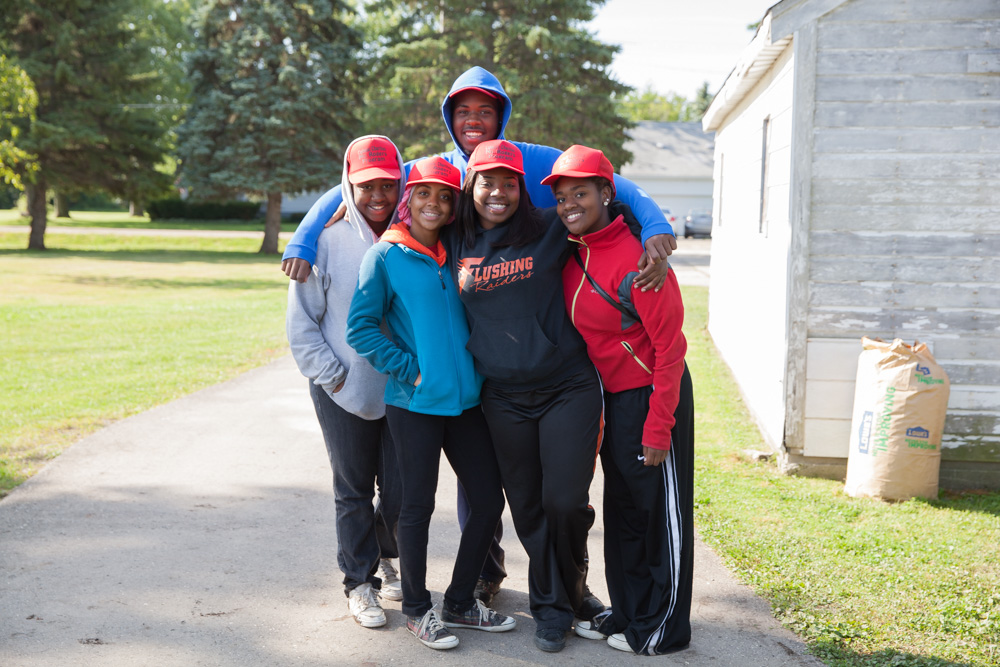 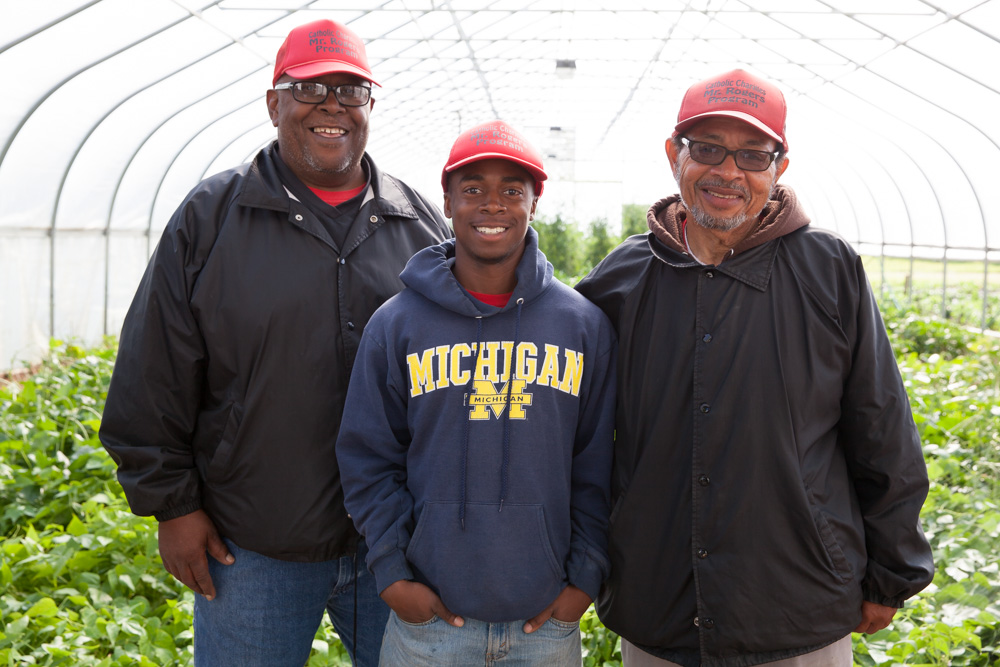 The Mr. Rogers Garden Program has been a positive force for teens who are not afraid to get their hands dirty to work the soil and tend the plants. Many come from single-parent families, Greg says. They’ve built character and self-respect by accepting responsibility for their gardens, showing up on time and working together. They learn to respect authority figures, to dress appropriately and to be respectable representatives of the program while out in the community. Some of them choose agricultural-related careers following graduation. During the school year from October through May, the program leaders also visit area schools to mentor and encourage teenagers.

Devoting many hours to their plants during the summer months, the youth take their work very seriously. When harvest time comes, they have difficulty cutting stalks and stems because they’re emotionally attached to their veggies. “These kids learn to put seeds in the ground and watch plants grow but when it’s time to pick it, they don’t want to,” says Vicky Schultz, CEO of Catholic Charities. “They’ve nurtured the plant and they’re proud of it.”

“They consider it their baby,” Greg smiles. “I tell them, ‘Now it’s time to cut it off the vine and take it to the market.’”

The youth work on Thursdays and Saturdays at the Flint Farmers’ Market, proudly wearing their red “Mr. Rogers” T-shirts and using their money management and customer service skills at the produce counter. During the summer, Greg spends every Saturday at the Farmers’ Market helping kids run the booth. “If I had a break, I’d go fishing,” he laughs.

The Mr. Rogers Garden Program is looking for dedicated adult leader guides to volunteer. To be considered, guides must love working with youth as well as gardening and culinary work. For more information, contact Vicky Shultz or Greg Gaines at 810.231.9950.