He had big shoes to fill … but Tony Tucker, former owner of Krystal Jo’s Diner in Flint, hit the ground running when he replaced Chris Hamilton as executive director of Old Newsboys of Flint last year. Hamilton passed away unexpectedly on March 1, 2019.

Well known for his community service, Tucker took over the position just as the COVID-19 shutdown occurred. Things were up in the air at that time and he had to close the restaurant he owned for 12 years. “I was 25 years old when I opened the doors,” he shares. Krystal Jo’s never re-opened, but Tucker is happy to report that he sold it and the new owner has plans to reopen it this year. 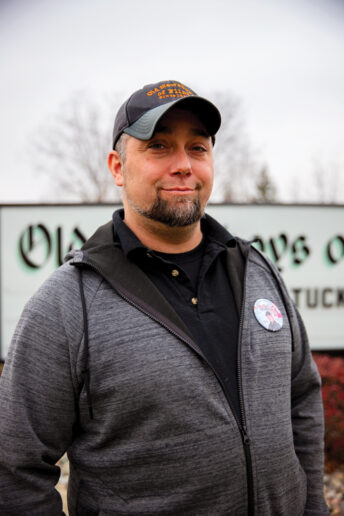 “I feel that I’ve found my calling. I intend to be in it for the long haul.”

Tucker was known for the Krystal Jo’s Bicycle Giveaway which he oversaw for eight years. He and Hamilton had developed a friendship and shared a common bond in community service. “Chris had asked me if I would be interested in replacing him at Old Newsboys,” says Tucker. “He was planning to retire and the intention was for me to shadow him, but he passed away before that could happen. It was a shock.” Even though this was Hamilton’s desire, the ONB board of directors had to decide whether Tucker was the right man for the job. “The board voted and I took the position at the end of March.”

The new executive director has spent the last year learning the ropes at ONB and was trained by two longtime staff members: Heather McMullen (Director of Finance) and Lisa Kirk (Director of Programs and Volunteers). “They scooped me up and put me to work. They are nothing short of amazing!” Tucker exclaims.

His position at ONB has kept Tucker very busy and he has, unfortunately, had to retire from the bicycle giveaway which was a time-consuming project. At any given time, he had 1,000-2,000 bikes sitting on his property. Right now, Tucker is doing a lot of PR work for ONB, meeting people and generating support for the organization. “A lot of new people have stepped up to help,” he reports. “With the pandemic, many fundraising efforts had to be canceled, so we’ve had to be resourceful.” One new supporter is Monster X Metal & Gold in Clio. The business held a fundraiser accepting metals from customers, raising $2,600. ONB also sold Chris Hamilton Memorial Christmas ornaments and buttons during the holidays and raised just short of $3,000. December’s annual newspaper drive is the largest fundraiser, but because of COVID, many of the usual volunteers were at a greater health risk, the director reports. Fundraising efforts for this year are not yet determined. “We’re holding off to see what happens with the pandemic,” Tucker says.

Tucker has found his work with ONB to be very rewarding. “People pull me aside and thank me,” he shares. “They tell me that they wouldn’t have had a Christmas without ONB. Some people just stop by to greet me and tell me we have their support.”

Despite the currently challenging times, Tucker is excited about the future and his position as Old Newsboys Executive Director. “I had very big shoes to fill,” he admits. “Chris was a walking icon. He was everywhere! He did a lot of good and he was a very humble man.”

Tucker believes he has a long future with ONB. “I have never felt so right about anything,” he admits. “I feel that I’ve found my calling. I intend to be in it for the long haul.”