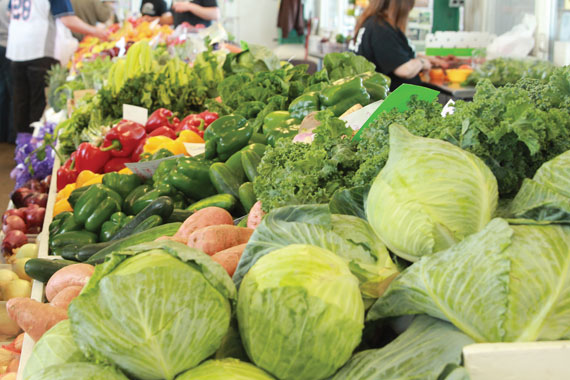 Going to the Flint Farmers’ Market on a summer afternoon is a beloved tradition for Flint area residents, as well as many in the surrounding counties. The mouth-watering scent of barbecue wafts through the air. The senses are overwhelmed by the brilliant colors found in an endless array of fresh fruits and vegetables, from green, yellow and orange peppers and sweet corn delivered straight from the farm, to deep purple eggplant and luscious red tomatoes. Mounds of huge, ripe watermelons are just waiting to be cut open and sampled.

Along with bountiful displays of poultry, eggs, bread, baked goods and cheese of every shape and variety, market-goers find fresh meats, a wine shop, art gallery, cafe, Middle-Eastern and Mexican groceries, fresh flowers and many unique gift items for sale. “People love this old place,” said Dick Ramsdell, market manager. “There is so much tradition here.” Geri Brown of Otisville is a loyal Farmers’ Market shopper who doesn’t limit her purchases to produce. She shopped for her Easter Sunday dinner at Knob Hill Meats. “Tommy sells the best meat in town,” she said of owner Tom Alex. Knob Hill Meats has been a family-owned-and-operated business in Flint since 1924. Their location in the Flint Farmers’ Market allows them to offer high quality meat and excellent service to another generation of area residents.

After a cold, wet spring, a good summer crop has been forecasted, and the season brings many fun events to the market, including “Music on the Front Lawn” and “Taste of the Market.” Ramsdell stated that a series focused on the role of healthy food in overall wellness will feature visiting chefs demonstrating fresh food preparation for people with special dietary needs such as diabetes, cancer, arthritis and heart restrictions, to name only a few.

The market has many longtime vendors; Hill’s Cheese is another example of a family-owned-and-operated vendor that has been here for 20 years. Hugh Godfrey of Godfrey’s Poultry & Eggs has been doing business there since 1964. “I love our customers and all the new people we meet,” said Godfrey. Maria Carlin, owner of d’Vine Wines, has been a merchant at the Flint Farmers’ Market for eight years. Hers is the first wine shop in the state to offer a wide variety of Michigan wines and micro brews at a farmer’s market, as well as a selection of wines from all over the world.

The market has occupied its current location by the Flint River since 1940. According to Ramsdell, it was built by WPA workers (President Roosevelt’s Works Progress Administration) and has a unique history. For example, the steel trusses supporting the roof are originally from the 1920 Union Street building, wheeled over to the current site on railroad cars. The pilings that anchor the cement floor were recycled in 1939 from the trolley tracks which ran along Industrial Avenue next to the old Buick plant.

Next year, the market will once again become a downtown city market when it relocates to the former Flint Journal printing facility at 300 E. First Street. Ramsdell announced that the move will allow the market to undergo significant updates and expansion, and to reclaim its position in downtown Flint after more than 70 years. David and Annissi Jawhari, owners of Beirut Restaurant, have offered delicious Middle Eastern food and groceries at the market for many years. Their son, Sam Jawhari, is very excited about the move to Downtown Flint. “It can’t come fast enough! We’ve outgrown this building,” he said.

Nancy Anagnostopoulos has been baking sweet treats at the Farmers’ Market Bakery since 1980. While she’s already making plans for the new space she’ll have next year, she said she will miss the ambiance of the current site. “It’s like leaving your first home,” she said. Although news of the move has been received with mixed emotions, Ramsdell said that it is very important for residents to welcome the Farmers’ Market back Downtown. To further the community’s involvement, public input has been ardently sought as to the aesthetics and features of the new venue. “Give us your feedback on our website,” Ramsdell encouraged. “We want people to participate in developing the look, shape and overall feel of the new market,” he said.

The Flint Farmers’ Market is open year-round from 9am to 5pm on Tuesdays and Thursdays, and on Saturdays from 8am to 5pm. It is currently located at 420 E. Boulevard Drive in Flint. For more information, call 810.232.1399 or visit FlintFarmersMarket.com.