A united Flint – this is the wish of the city’s newest leader, Mayor Sheldon Neeley. The residents of Flint elected him to the position in November 2019. His pledge to the citizens of Flint was to bring transparency and fiscal responsibility to City Hall and he and his staff are busy working to honor that pledge. Neeley took time out of his busy schedule to chat with MCM. 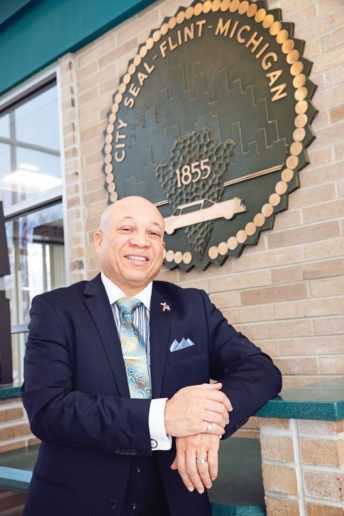 Born and raised in Flint, Neeley attended Bunche Elementary School and graduated from Flint Northern. He earned an associate’s degree from Delta Community College and a bachelor’s degree from Saginaw Valley State University. Neeley then worked as an engineer for WJRT-12 for nearly three decades and also as a counselor in Flint Community Schools for ten years. “I am Flint, through and through,” he says with a smile.

Neeley brings with him a commitment to public service which started in 2002 when he joined the Flint Civil Service Commission, a board that investigates wrongdoing at City Hall. In 2005, Neeley was the first African American elected to the Flint City Council from the 6th Ward, a racially diverse area serving Flint’s central west side. He was re-elected in 2009 and 2013.

In 2014, he was elected to Michigan’s House of Representatives, serving the 34th District, and was re-elected in landslide victories in 2016 and 2018. While in the House, Neeley fought for Flint residents during the Flint Water Crisis, helping to bring millions of dollars in aid to the city and by changing state law to require that residents be informed whenever harmful elements are present in their drinking water.

“My service to my community has always been about working with people,” says Neeley. “That’s what is really important to me. My work has never been about what position I hold; it has always been about building relationships near and far to serve the residents of Flint and working side-by-side with the citizens. I have always felt called to serve and have always trusted that God would guide me to where I should be and what I need to do.”

“We are working hard to make corrective actions and put City Hall and the City of Flint on the right track.”
Mayor Sheldon Neeley

It was his sense of community that led Neeley in his decision to run for mayor. “I wanted to be a part of the movement here in Flint to move our city forward,” he shares. “I saw a need for accountability at City Hall and transparency in our local government.”

The top priorities of Mayor Neeley’s administration are to provide stabilization to City Hall and to create a community vision. “We are working hard to make corrective actions and put City Hall and the City of Flint on the right track.” 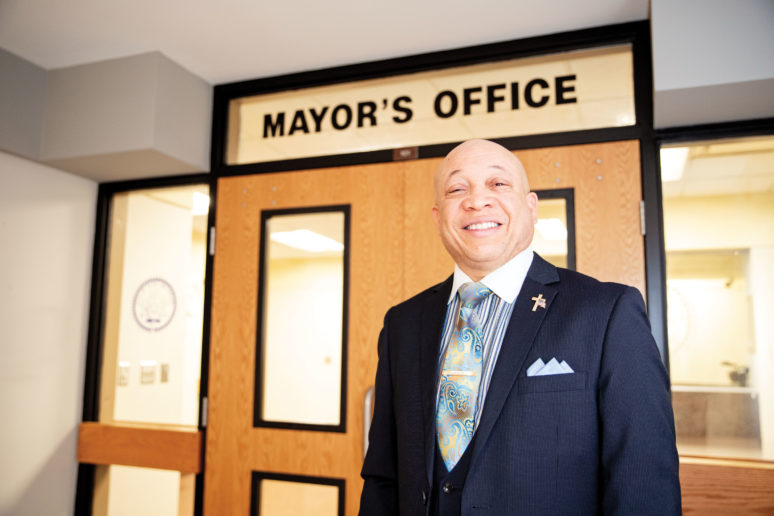 Family is also very important to Neeley. He and his wife, Cynthia, have been married since 1992. They have two daughters, Taylor and Morgan. Neeley has received much inspiration from his mother, who he says inspires him every day. “She was a single mom who worked hard to provide for us kids,” Neeley remembers. “She taught us about hard work and shaped me into the man I am today. She is currently fighting stage four cancer and I continue to be inspired by her strength, grace, and unwavering faith.”

Neeley’s busy schedule doesn’t allow for much free time. “I love golf, but it’s been a few years since I’ve been able to spend much time playing,” he says with a smile.

Neeley looks forward to moving the community toward a brighter and better future. “My hope is for a united Flint. A unification of thinking and a unification of effort makes for a community of like-thinkers moving forward in a positive direction.”