For the Cooke family, a visit to the doctor’s office for strep throat turned into five days in the hospital – and a shocking diagnosis. But, this amazing family has stuck together as a team, inspiring others as they raise awareness of a misunderstood disease.

Meagan and Chris Cooke have two daughters: nine-year-old Makenna and seven-year-old Caitlyn, who were both recently diagnosed with Type 1 diabetes (T1D). Type 1, while similar in the treatment and effects, is the only type – so far – that is incurable. An autoimmune disease that strikes both children and adults suddenly; it has nothing to do with diet or lifestyle, and there is currently nothing you can do to prevent it.

Makenna was diagnosed in May 2016. “We had no idea,” Meagan recalls. “It wasn’t until after we knew what we were looking for that we realized she had a lot of the symptoms. We just didn’t know what they meant at the time.” Makenna was always thirsty, hungry and tired, she lost some weight and had occasional blurred vision. But, at the time, the nine-year-old just wanted to keep playing with her friends at school. “The teachers said I should go to the office, but I wanted to stay – it was Field Day,” she agonized. “I got diagnosed on the worst day possible!” But the Cookes got her to the doctor, and just in time. Meagan explains, “they noticed that she had lost about six pounds, and started asking more questions. They did additional tests and found ketones in her urine.” Normally, your body burns sugar for energy, but diabetics may not have enough insulin for the sugar in their bloodstream to be used for fuel. When this happens, their body burns fat instead, and that process produces ketones. When they found the ketones, they immediately sent the Cookes to Hurley Medical Center and when they got there, Makenna was in full-blown diabetic ketoacidosis – a potentially life-threatening condition. “She spent five days in the hospital, in the PICU,” Meagan says. 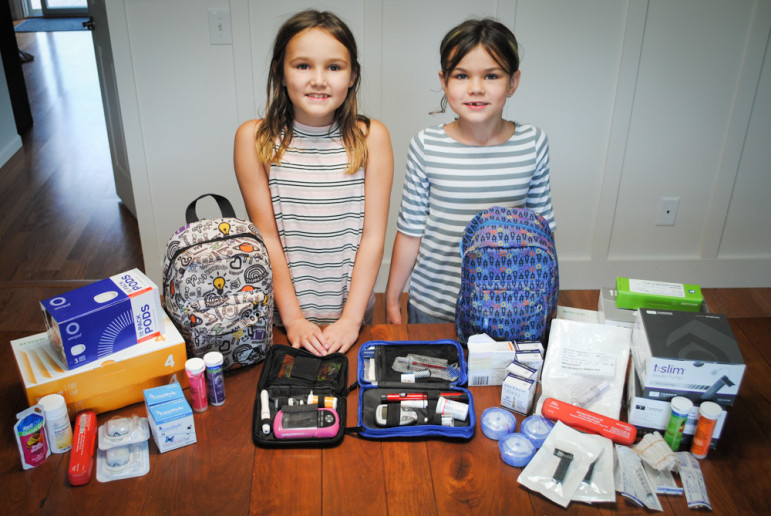 During that first night in the hospital, Meagan says, “every moment that Makenna was asleep, I was trying to figure out what all of this meant. And luckily, a friend connected me with a Facebook group called Grand Blanc/Flint JDRF Support Network.” That group was an abundant source of information in those early days, and still remains an important link for the Cookes to gain support, and to support and educate others.

After Makenna’s diagnosis, the family changed to a diabetic diet and occasionally checked their own blood sugar levels, as well. Meagan explains, “we started checking Caitlyn’s when she asked, because she wanted to be like her big sister. And in late November, she had a high blood glucose reading from one of the finger pokes, so we took her to the doctors.” They tested her with what is called an A1C, a blood test that shows sugar levels for the past three months, and Caitlyn’s results were borderline – so, they sent the family home to keep an eye on it. “Well, come December,” Meagan says, “she asked to have her finger poked again, and her blood sugar was 510. A person with a normal functioning pancreas would rarely get over 140.” That was when they took Caitlyn to the hospital and she was diagnosed with T1D.

The Cookes were fortunate to catch Caitlyn’s blood sugar spike early, because even with a level that was extremely high, she didn’t yet show any symptoms and left unaddressed, it could have turned into diabetic ketoacidosis, like Makenna. Diabetic ketoacidosis (DKA) occurs over time as acids build in the blood after sugar levels are too high for too long. DKA could be life-threatening, but usually takes several hours to become that serious. This time, the Cookes were already prepared. 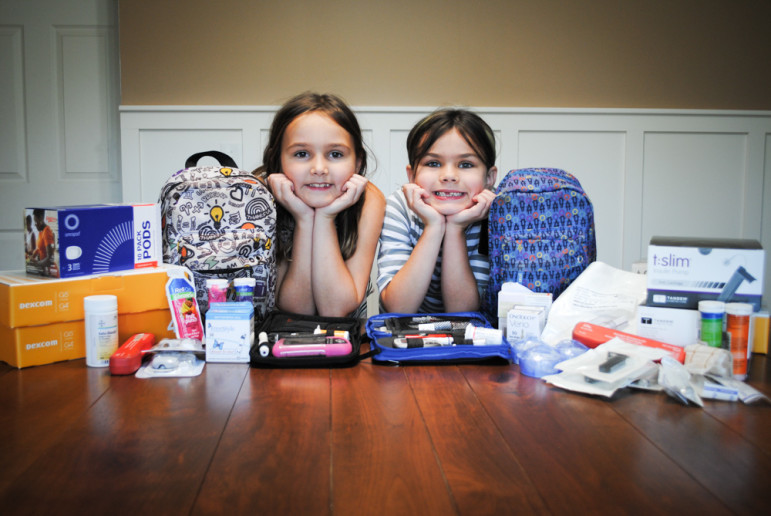 With both daughters diagnosed with T1D, life has changed dramatically for the family. “A diabetic’s diet is the healthiest diet for anyone, so we all eat healthier now,” Meagan says. “Besides that, Chris and I basically function as the girls’ pancreases.” Meagan says it would have been impossible for the couple to care for the girls while both of them worked full-time, so Chris offered to stay home and take charge of their day-to-day care. “Chris is on-call 24/7 for anything related to the girls and their diabetes,” Meagan says.

The girls each have what they call their “lifesaving backpack” that is on their shoulder wherever they go, filled with everything they need for their diabetes. Not only do they know everything that’s in it, but they know how to use it. Caitlyn explains, “it has my test strips, my poker and my meter, my insulin pen. This is frosting [glucose gel]– if I don’t want to eat and I can’t chew, this goes on my gums.” She continues, “I have a book to look up carbs, and glucagon, glucose tabs, more and more glucose tabs and gummies, gummies everywhere!” Meagan and Chris explain that the glucagon is for emergencies. “It’s a big shot, kind of like an EpiPen for diabetics, with straight glucose – so, if their sugar drops and they pass out and are unresponsive, the glucagon is the only way to get their sugar to come back up and wake them up.” And Caitlyn knows exactly how the whole thing works and how to self-administer it if she needed to.

Since Makenna and Caitlyn’s pancreases do not regulate blood sugar, the regulation happens in the form of constant monitoring and managing. The Cookes began like most newly diagnosed families: leaving the hospital supplied with test strips and shots. They had to watch the blood sugar numbers to know when to give the girls insulin or snacks. Meagan says, “for the first month after both of them were diagnosed, we had to check blood sugar every three hours, and that includes through the night. So, Chris and I would take turns all night, and that was a big change.” That monitoring also makes normal things like school, going to a friends’ house, or a sleepover more complicated. “It’s tough, because before they can stay anywhere for any length of time, we have to give everyone a lesson on what to do,” Chris says.

Lorrie Sage, the girls’ grandmother, is part of this family-support group and she reflects on how things have changed since the diagnosis. “We do sleepovers every weekend, and once they got diagnosed, that was really hard to do, especially when they had to have shots. It’s intimidating and very scary. I don’t sleep when they stay with me; I worry, because the nights are the scariest time.” 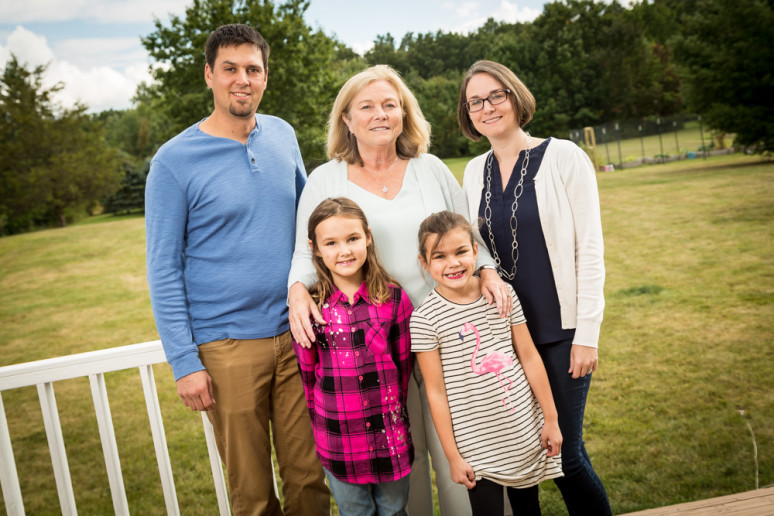 “Before they had the CGMs, they were getting
10-12 finger pokes a day.”
LORRIE SAGE

Through research, the family discovered the importance of Continuous Glucose Monitoring (CGM). Meagan says, “in the beginning, we didn’t even know about CGM – we were just checking Makenna’s blood sugar every couple of hours and were completely in the dark the rest of the time. Those were the worst times. Those were the dark days.” CGM is a monitor and insulin pump system that the girls now wear at all times. It checks blood sugar every five minutes and runs the data to the girl’s cellphone, along with the phones of the whole team that tracks their numbers: mom, dad, grandma and their aids and teachers at school. The CGM system allows them to see the trends in sugar levels and alerts them if they are hyperglycemic (too high) or hypoglycemic (too low). Lorrie explains how much difference the device has made. “Before they had CGM, they were getting 10-12 finger pokes a day.” Now, only if they are high or low do the girls get a finger poke just to double-check the monitor’s accuracy, rather than getting pokes all day long.

The CGM’s ability to track trends in blood sugar levels is something Meagan calls an “absolute necessity,” explaining, “if their blood sugar is 180, and they want to eat something, normally we wouldn’t include a correction factor, we would just give them insulin to cover the carbs. But, the CGM tells us if they are at 180 and soaring up (it shows double “up” arrows), or if they are 180 and they are dropping (double “down” arrows). If they are soaring up, they need more insulin; if they are dropping, they need carbs and no insulin. Those are three completely different courses of action that lead to drastically different results. With a finger poke alone, you just don’t know.”

Lorrie emphasizes the importance of the CGM, as well. “If you check their sugar in the middle of the night and all you know is they are at 180, you do nothing and set an alarm to check again in two hours. Two hours could be too late if their blood sugar was at 180 and dropping,” she says. Meagan adds, “Oh, it definitely could be, because their blood sugar can go from 180 to 40 in 30 minutes if they are headed down quickly. That is why the CGM is so necessary.”

But, the CGM system is a luxury that is almost unreachable without insurance coverage. So, Meagan has fought with insurance companies for her daughters, and helped others to gain access to this life-changing technology. For Makenna, they applied for it and were denied. Meagan had to write a letter to the insurance company, get a letter from the doctor and supply blood sugar readings for months. “Then, when we got Caitlyn’s diagnosis, we immediately applied for a CGM for her, and that was denied. So, the process started all over again; another letter, another fight with the insurance company for something we rely on so much.”

While regulating their daughters’ blood sugar is necessary to keep them alive, the Cookes work even harder to keep the girls happy. Chris and Meagan do everything they can to keep their lives as normal as possible, and also keep them connected with other kids with T1D. “Through the JDRF (Juvenile Diabetes Research Foundation), they gain support and attend outings where the girls can look around and see that everyone is checking their blood sugar and figuring out insulin and carbs, and it’s like a weight is lifted off their shoulders. It’s fabulous.” There is also a summer camp for children with diabetes (Camp MIDICHA) through the American Diabetes Association at Camp Copneconic in Fenton, that Makenna and Caitlyn love attending. The girls are now taking gymnastics classes and adjusting to another new school year.

If you or someone you know has recently been diagnosed with Type 1 diabetes, Meagan and Chris emphasize the importance of getting connected to a group and doing your research. “It’s trying to constantly manage the roller coaster,” Meagan says. “There will be highs, there will be lows. We just try to minimize the peaks and valleys as much as we can.”
For more information on the JDRF, visit jdrf.org.

(l-r) Makenna & caitlyn with their “lifesaving backpacks;” all the supplies needed to manage their T1d.
Photography by Eric Dutro
and Provided by Meagan Cooke