Strike up a conversation with Madison Ballard and it soon becomes obvious that the tennis court is her happy place. She finds solace in a strong serve, bliss in a finely-executed backhand, revelry in a winning rally, and euphoria in a firm forehand.

“Tennis has really helped with me with life, overall,” Ballard says. “Let’s just say I’ve had some dysfunction in my life at times, and the tennis court has been a great place to release any pent-up frustration I might be feeling. The sport has been a sanctuary for me because I don’t have to concern myself with anything else that is going on and just concentrate on the match.” Tennis, however, has afforded the Fenton graduate much more than a haven from stress and anxiety. 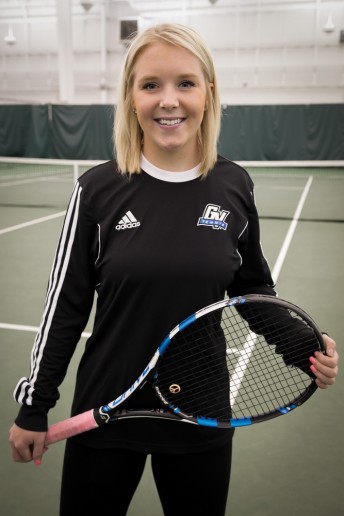 After one of the most successful high school careers of any player in Genesee County history, the four-time first-team All-Stater and two-time state semi-finalist is off to a flying start at Grand Valley State University. Through March 15, Ballard boasted a 14-3 singles record and an 18-6 doubles mark as a freshman, helping the Lakers to a 19-4 record. They are ranked 28th in the nation in Division 2. Ballard was tied for third on the team in total wins and only one other doubles team in the Great Lakes Intercollegiate Athletic Conference has more wins this season than Ballard and Alexa Sweeney.

“Being at Grand Valley has been great so far and I love everything about being a college athlete – from the serious training to the matches against strong competition – and even the things that can be challenging, like studies and time management,” Ballard says. “I have gotten over some bad habits that I had in high school and feel really good about how I’ve been playing.” So does her father Gary, who is also the Fenton Girls’ Varsity Tennis Coach.

Gary Ballard also acknowledges the role tennis has played in his daughter’s life as a respite from whatever might be on her mind. “When you are out there on the court, it’s like you are in your own little world for a time and isolated from other things, which really helps in tough times, but Madison has adapted well to college and has made real progress since her first college match last fall,” Gary Ballard says. “I am sure Madison was hoping to start at a higher position in the line-up, but she’s steadily moving up because of a very strong work ethic. I don’t think I have ever seen her so motivated. She does not want to miss a single day of training.”

Ballard, who has advanced to the fourth singles position and second doubles slot in the line-up, learned quickly the level of commitment collegiate tennis requires. “If you want to win matches, you have to be committed and motivated all the time because it can hurt the team if you are not,” she says. “In high school, you can sometimes get away with not being motivated, but in college, you can’t – you have to treat it like a job you are very passionate about.” 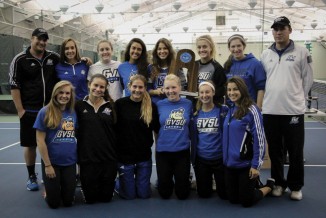 Ballard made her college debut on September 5 against Michigan Tech’s Rebecca Koscielniak. “I was fine and feeling calm the entire week before the match, but then right before it started, I did feel some butterflies in my stomach and jitters,” Ballard admits. “I got over it, though, got out on the court, went to work and took care of business.”

Turns out, there was no need to worry as Ballard trounced Kosielniak, 6-2, 6-4. In fact, Ballard won ten of her first 12 singles matches and 13 of her first 17 doubles matches while still working out some kinks in her game. By the end of October, Ballard had helped the Lakers to a share of the GLIAC Championship.

“In the fall season, I lost my forehand for a time and was not hitting the ball as I like to, but I was able to fix that and help the team to win a championship – like, that was amazing,” Ballard smiles. “It was great to be one of the contributing factors to a title.” Some of Ballard’s most impressive singles victories have come against Findlay’s Sheridan McLean,  an Ohio high school state champion, Davenport’s Ann Douwes (9-4 record this season), Tiffin University’s Rachelmary Brozovich (two-time state semifinalist at Port Huron Northern High School), Southern Indiana’s Jennifer Mizikar (129-24 high school record) and Saginaw Valley State’s Danielle Slonac (11-6 mark this season and state semifinalist at St. Clair High School). Ballard also challenged Lynn University’s Martina Gledacheva, who is ranked 20th in the nation, before falling in three sets. 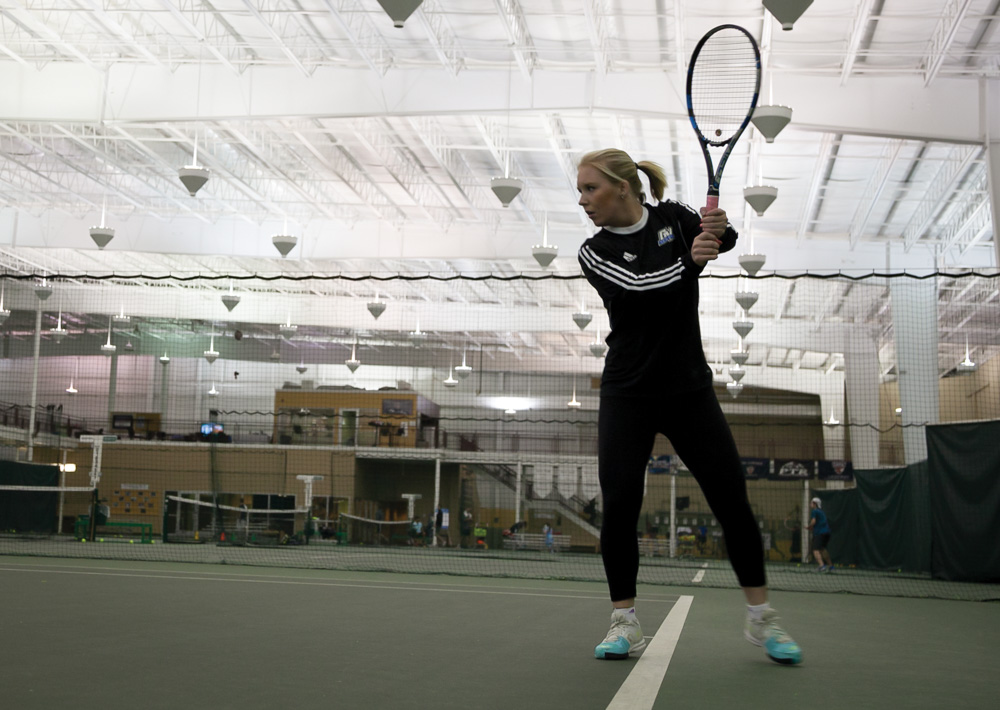 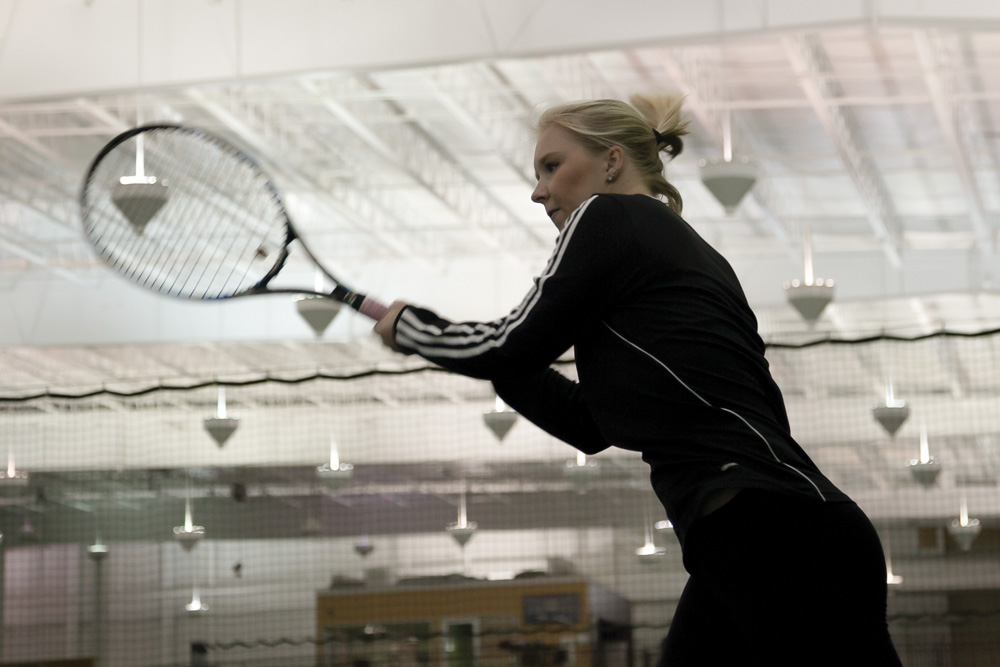 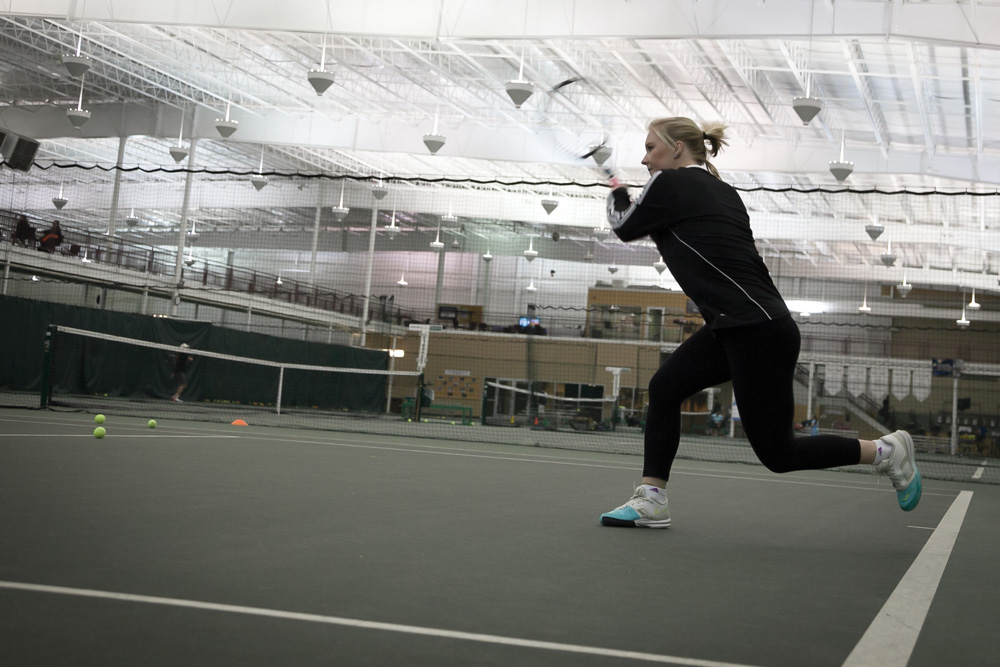 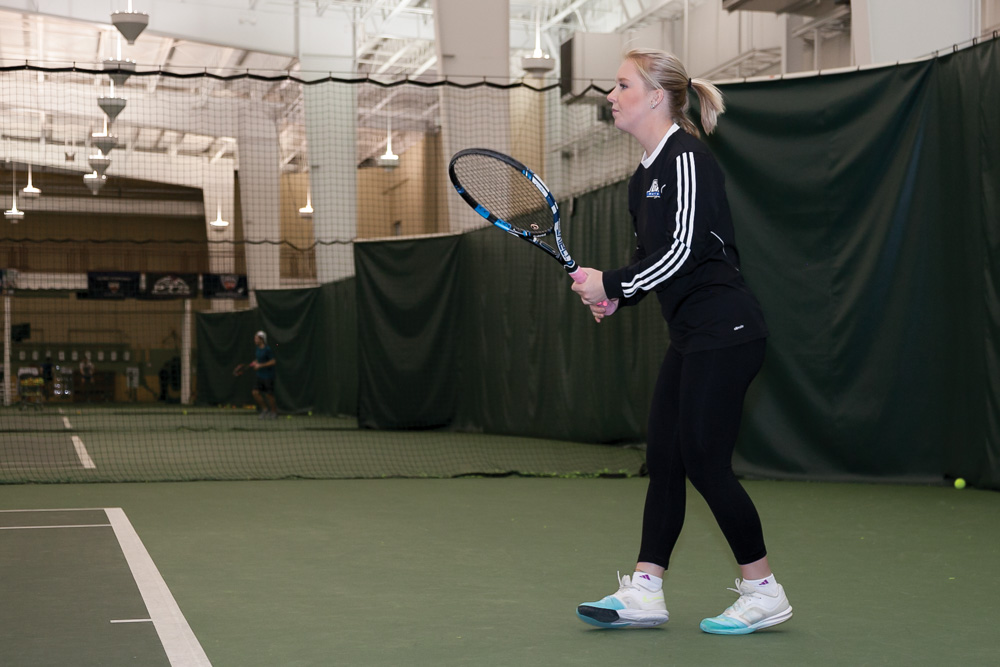 Ballard’s accomplishments thus far are no surprise to Grand Valley coach, John Black. “I had seen Madi play several times over her high school and USTA junior career,” Black says. “I recruited her because she had a strong tennis game, had solid academics and had a game with the potential to improve tremendously over her college career. I felt that she would help our team right away as a freshman and indeed, she is playing very solid tennis right now. Madi has worked hard over the season and during the off-season. She has the potential to move up our line-up and be one of the top players in our region.”

Ballard’s tennis journey began innocently enough when she started to accompany her father and older sister, Jordan Tigner-Prince, to practices. Tigner-Prince was Fenton’s No. 1 singles player from 2003-2006. “Madison kept herself occupied by hitting the ball against the wall and quickly developed a love for the game,” Gary Ballard recalls. “From there, we put her into more organized training and she started playing some matches.”

Another major factor in her development was working with renowned area coach Gilbert Rincon for 11 years. “I can’t say enough about how much I owe what has happened in my tennis career to coach Rincon,” she says. “He taught me the best techniques and everything, but also the importance of sports psychology. He is very big on mental toughness and pushing through adversity to accomplish goals. There is no way I would be the tennis player or even the person I am without him.”

As a result, Ballard was very prepared for success the second she reached high school. She posted a stellar 95-8 high school record and is the only four-time, No. 1 singles champion in Flint Metro League history. She also captured four regional titles. “I would say I am more than pleased with what I accomplished in high school and it paid off with a full-ride scholarship to Grand Valley,” Ballard says. “Not many people can say they landed a four-year, full-ride to attend college.”

Ballard was ranked the third-best high school senior player in Michigan and 138th nationally by TennisRecruting.net, which naturally led to plenty of interest from colleges. She also visited Fordham University in New York City before settling on Grand Valley. “During my visit, I was just really impressed by the campus, how new everything seemed and the quality of the facilities,” she says. “The coaching staff was really great to me and made it an easy choice.”

Now, Ballard is driven by a desire to reach several goals during her time with the Lakers. “The biggest thing is that I want to work my way up to the No. 1 singles position and be first-team all-conference,” she says. “I want to help us get to the national tournament, as well. I also can’t wait to become more of a leader when I am a junior and senior to help the younger players develop.”

Ballard, who is in the process of deciding whether to major in business or a medicine, also sees coaching her future. “I could certainly see Madison as a coach because she was such a strong leader in high school,” Gary Ballard says. “It’s easy to see what might be wrong, but knowing why it’s wrong and how to fix it is the important thing. Madison has the ability to do just that.” That ability and others should continue to serve her well.