Handling the retirement of surefire, first-ballot Hall of Famer David Ortiz was not the only major issue facing the Boston Red Sox during the past offseason. The man credited with prolonging Ortiz’s career and ensuring that his final season was one of his most productive – Director of Sports Medicine Services, Dan Dyrek – was also leaving the organization.

A New England icon, the 63-year-old Dyrek also prepped Boston Celtics’ legend Larry Bird for his starring role with the dominant, gold medal-winning 1992 Olympic team. For his peace of mind, Bird then insisted Dyrek accompany him to Barcelona. To find Dyrek’s replacement, the team reached out to the American Physical Therapy Association and was given the name of, among others, University of Michigan-Flint professor, James Creps. 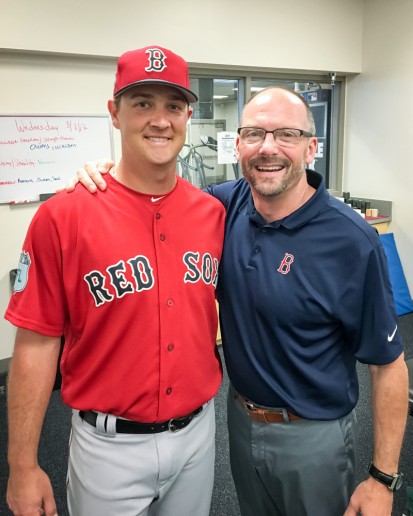 “It was a normal workday early last October and I was checking my messages as I normally do, and there’s something official-looking from the Boston Red Sox, insisting they wanted to speak with me about a position on their staff,” he recalls. After asking UM-Flint Physical Therapy Program Coordinator Christina Wixson for her opinion on the e-mail’s authenticity, Creps crafted a response.

“I thanked them for reaching out to me, but said I was happy with my work at UM-Flint and was not interested,” says Creps, who was serving as Associate Director of Post Professional Programs, among other roles. End of story? On the contrary, it was only the beginning.

While initially declining interest, Creps did send Dyrek an enhanced résumé and a curriculum vitae, and the Red Sox were impressed.

“The next day, I went into his office and from the response, they were not just interested in him, they were relentless,” says Wixson. The Red Sox were indeed insistent and before Creps knew it, he was talking constantly with Dyrek and then flying to Boston with his wife, Sandy, for the first of two interviews. Following a second conversation with some of the team’s top brass, Creps accepted the position, signing a contract early last December.

“This has been such a fun experience and very satisfying getting to know the players and people in the organization, because they are so genuine,” said Creps last month from the Red Sox’s spring training home in Fort Myers, FL. “It’s probably the main reason I took the job. I’ve been evaluating the health of players and doing everything I can to be sure they are ready for baseball’s long season, during which a lot can happen to their bodies. They are such professionals and I’m seeing up close the caliber of organization Boston is, and how everyone is so committed to winning another World Series.” 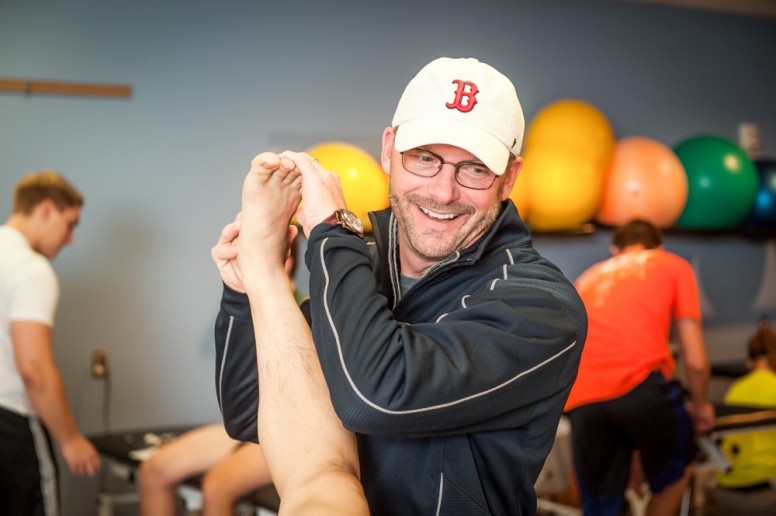 “Pitchers routinely have injuries to their wrist, hands, elbows and fingers, and it’s my job to keep them off the disabled list if at all possible. Fortunately, I came into the job with plenty of advanced experience in dealing with and studying those injuries,” says Creps, who treated members of the seven-time state champion Blissfield High School baseball team when he operated a practice in that area. “I sense that the Red Sox players have appreciated how I’ve offered a fresh set of eyes on problems they may be having, and they are so willing to take any instruction to heart,” he continues. “Watching spring training here is like watching a well-oiled machine.”

The 55-year-old Creps has always operated with precision during a physical therapy career that spans more than three decades. A swimming, tennis and cross country varsity letter-winner at Adrian High School, Creps decided he wanted to help athletes and others heal whatever was ailing them. He established a physical therapy practice in nearby Blissfield in the mid-1980s, gradually earning respect and praise from peers in the profession. Sandy Creps, a certified yoga instructor, later opened a studio above her husband’s office.

“Sandy and I really loved serving the community of Blissfield and what we did went so well together, as far as helping people recover from whatever was happening to them,” Creps says. However, just as he experienced recently, an unexpected offer was thrown his way at the moment he felt satisfied with what he had accomplished professionally. Something even greater was in store. 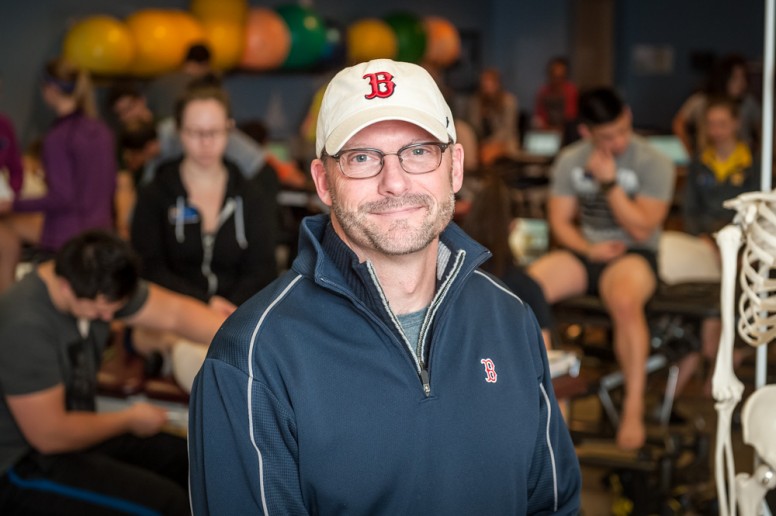 In 2009, then-UM Flint Physical Therapy Department Director Cindy Pfalzer felt Creps would be a good fit for an opening she was trying to fill. “Cindy contacted me and said she needed somebody to run UM-Flint’s physical therapy residency program,” Creps says. “I had great respect for her and the work being done there, so I took the offer. My time at UM-Flint and the people I was able work with was incredible.”

Among other achievements, Creps and students set up a pro-bono PT clinic at Flint’s North End Soup Kitchen. He also served on an American Physical Therapy Association board which developed college textbooks and exams. Upon Pfalzer’s retirement, Creps began overseeing UM-Flint’s other residency programs in addition to physical therapy. “Cindy’s shoes were some big ones to fill, but it was an honor for me,” he recalls. “It also helps to have very gifted people to work with.”

Creps indeed felt he was set, until a highly-respected medical professional’s departure from the Red Sox set in motion a chain of events that changed everything. “I started having conversations with Dan Dyrek for a couple of hours at a time and he was very thorough about what my duties would be during games and other times,” Creps says. “I met my current boss [Brad Pearson] and other people at my first interview and everything seemed so natural.”

He decided to accept the job after his second interview on November 26, and contract negotiations began. “I felt I was probably going take the position while flying to Boston for the second interview, but certainly had mixed emotions,” says Creps, who was hired from a pool of 27 candidates. “Make no mistake, I was very happy at UM-Flint.” He traveled back to Flint and informed his colleagues.

“When Dr. Creps walked into my office that morning, I knew what he had decided,” Wixson said. “I was many things that morning, but most of all proud. He and I had been in the trenches together and came out stronger. It was bittersweet for me, but the right choice for him. While UM-Flint lost a valuable asset, I felt the Red Sox had just signed up for victory.”

One of Creps’ first assignments came directly from General Manager Dave Dombrowski – evaluating the medical state of players he was considering dealing during the offseason, and of those he was hoping to acquire.

“Right away, I was doing something important while going over what my role in spring training would be with Mr. Pearson,” Creps says. “I will continue to treat players during the season, of course, and travel with the team to continue treating them, if need be. There is a good chance I will be back in Michigan with the Red Sox at Comerica Park at some point.”

Wixson and others who worked with Creps feel he is in the right place. “I think it says a lot about Dr. Creps that he built his own legacy – owning his own practice, serving on boards, succeeding in the corporate and academic worlds – and still decided to take a chance like this,” she says.

It’s probably safe to assume that the Red Sox are happy they took a chance on Creps.