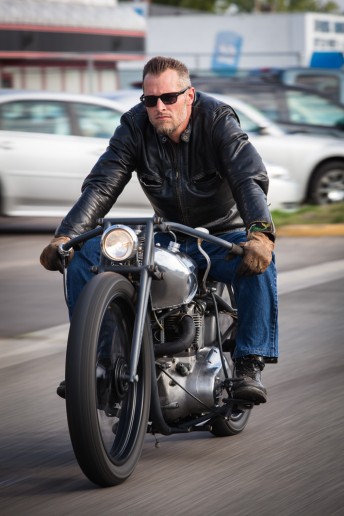 The sign for Knight Cycle Works looks like it could have hung from an awning outside a business a century ago.

It has that weathered look with a hand featuring an extended index finger pointing to the words “Knight Cycle Works” in older-style, bold lettering. Above the business’ name in smaller, block letters are the words “Hand Built” on the left and “Quality Made” on the right.

That perfectly describes the way owner Pat Knight insists on running the business, which he operates by appointment only from a converted two-car garage at his home in Flint.

“I specialize in custom motorcycles built from the ground up and it’s something I take a lot of pride in doing,” says Pat, 39, who has worked in metal fabricating in one form or another since he was a teenager. “I have been in business for myself about one and a half years now and it’s been great, seeing a creation coming together in the shop I set up myself. I don’t do it for any personal recognition other than feeling satisfied with the work I do.”

Pat can usually be found working on two motorcycles at once, carefully crafting them piece by piece.

“I’ve worked building custom bikes with others and at other locations, but I’ve found I really like working at home the best because there is a lot less overhead and other hassles,” he says. “I’m working on a bike for a buddy of mine right now which I currently have on my hoist, and another one that’s on the floor.”

When finished and taken outside into the sunlight, Pat’s creations glisten and gleam, making it impossible not to notice the detail and care taken with the distinctive metal work. That’s what he hopes others can appreciate when it comes to his work.

“I like to make pretty unique machines when I can, and go out of my way not to look at magazines or on the internet for any creative ideas because there is only one source I want to go to for my creations – my own mind and experience,” Pat insists. “I describe my work as functionality meets fashion. I use minimal paint because I like to keep it bare to let the metal work and welding patterns shine through. It’s minimalist, but not simple. There is a big difference.” 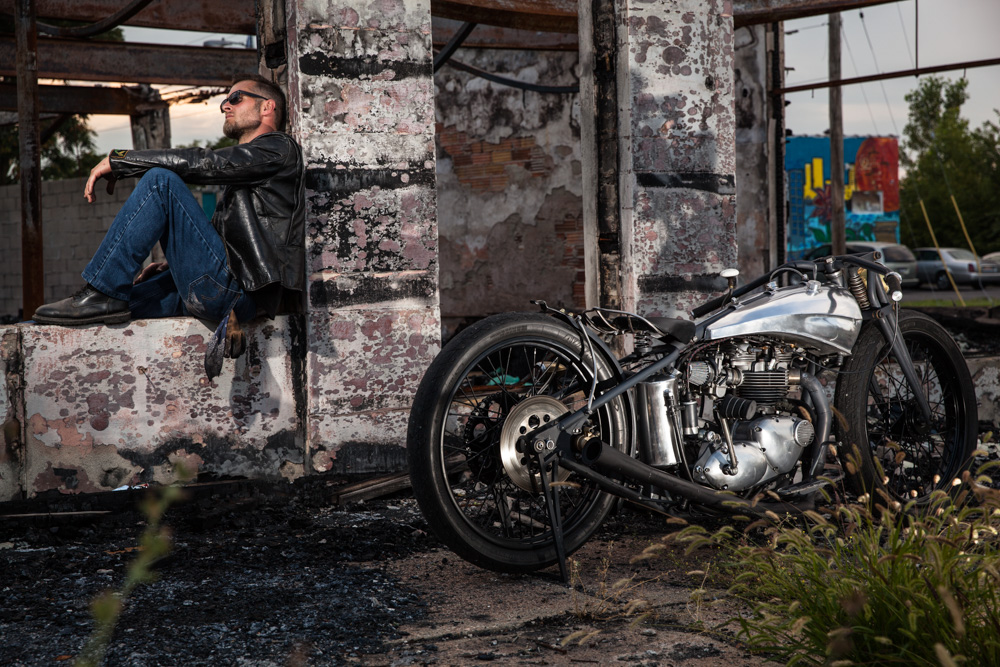 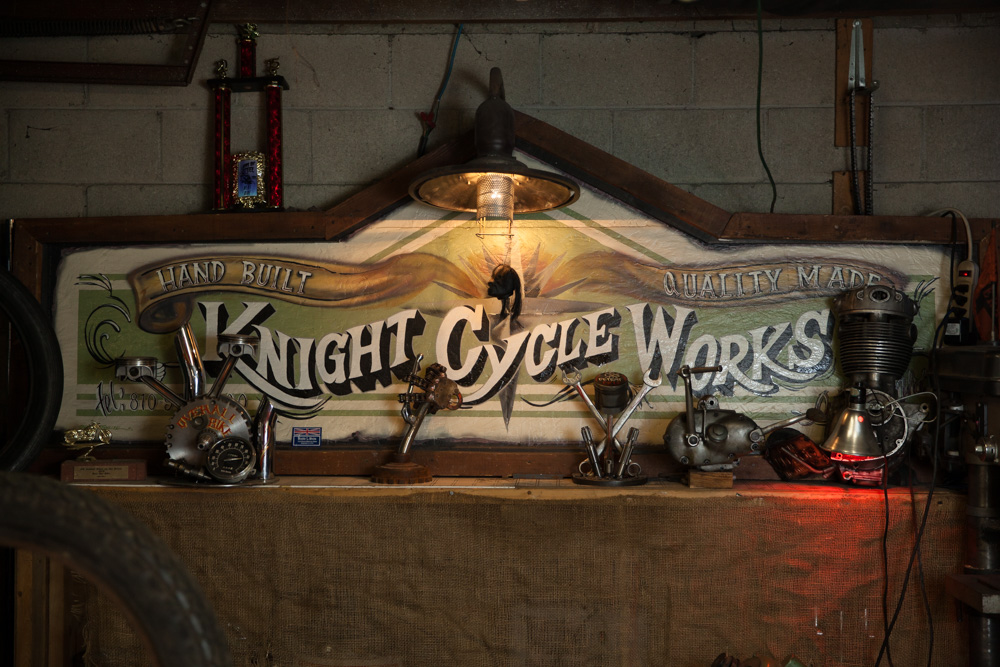 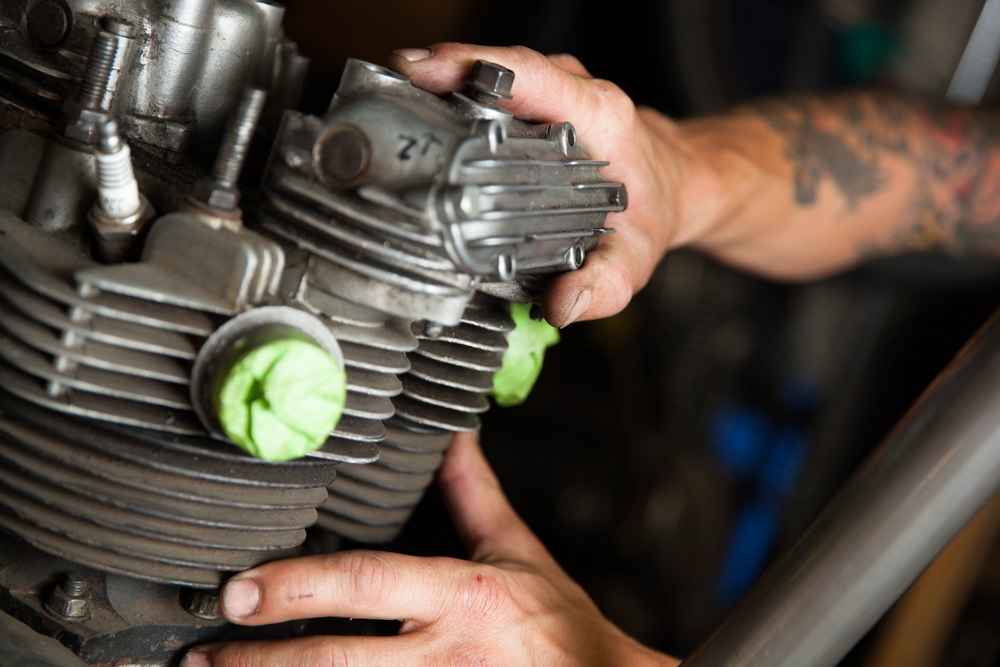 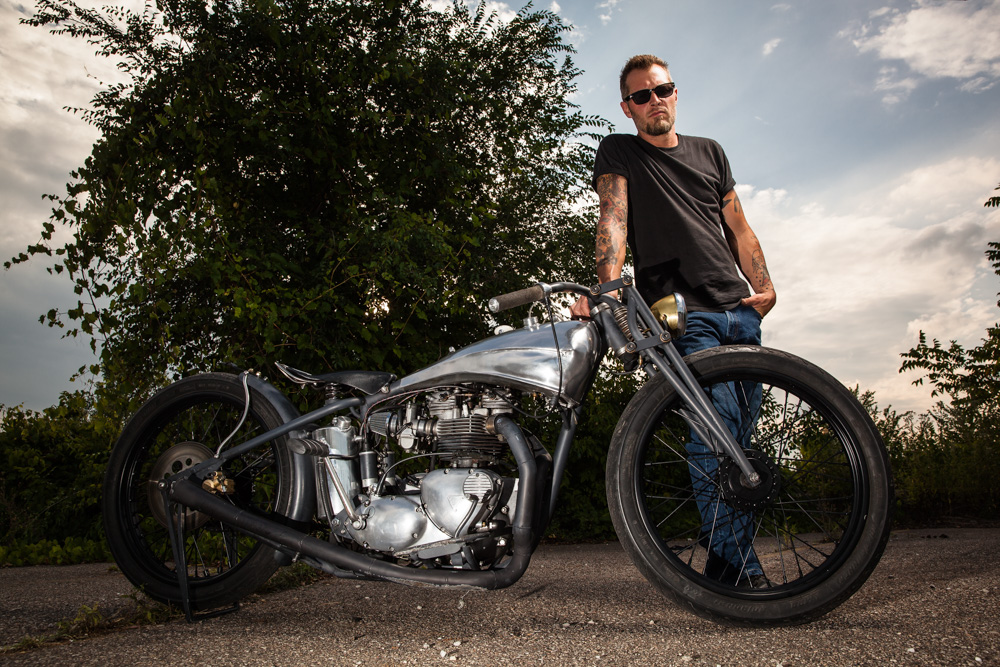 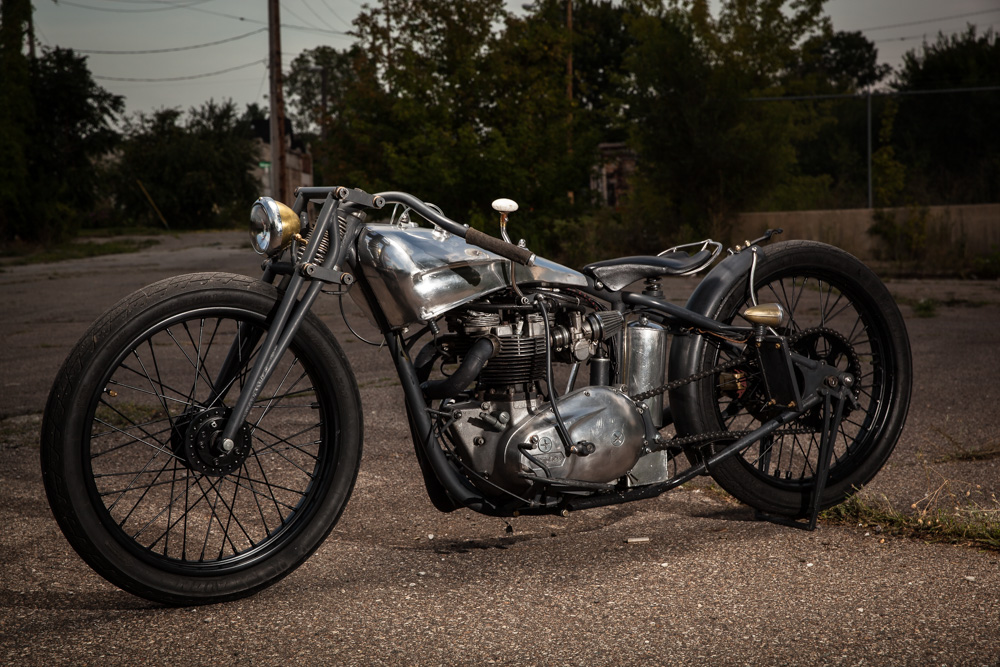 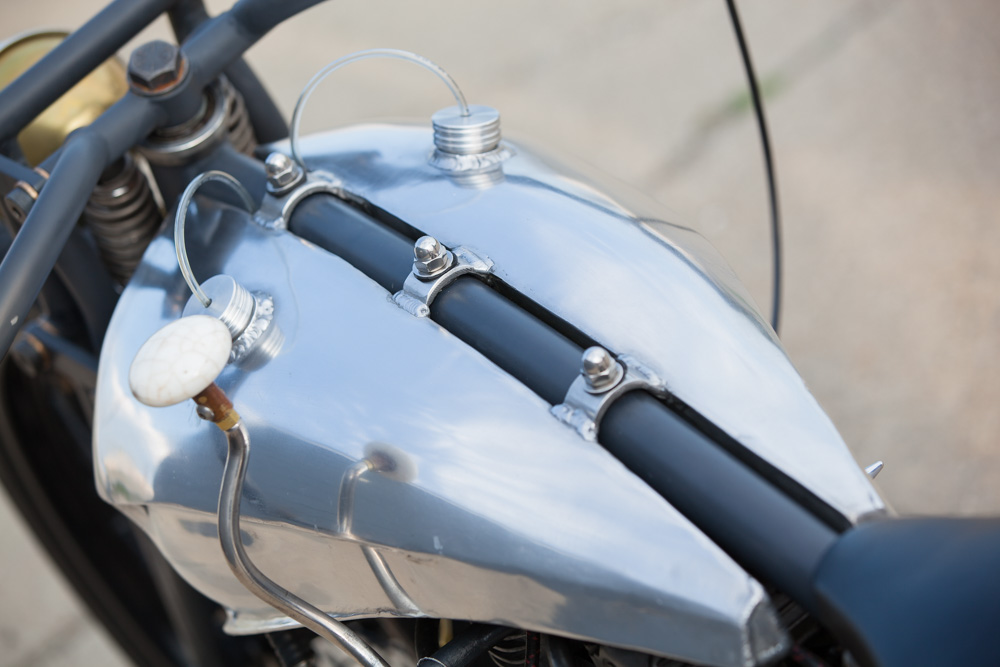 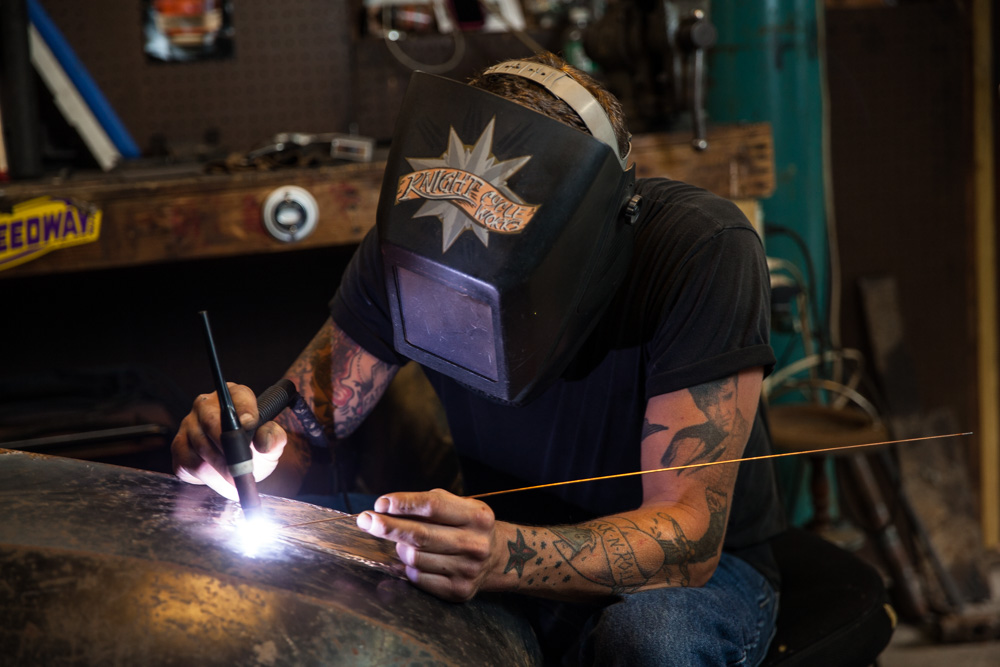 Some of Pat’s recent builds include a motorcycle made with parts from a Triumph 750 five-speed, and one with parts of a 1969 TRF Café model. He also completed a sleek, shiny ride for himself dubbed the “Grey Ghost.”

Pat is so passionate about Knight Cycle Works it would be easy to conclude that is the only work he does.

In fact, his plate is more than full – it’s overflowing. Pat’s day job, or as he puts it, “my 9-to-5er,” is at a body shop in Fenton. After, he spends most evenings tinkering in his garage. Most of his weekends are spent playing stand-up bass in one of three bands, including the Genesee Ramblers which mixes rockabilly, bluegrass and classic country. Pat, who formed the band with Mike Boyd about 13 years ago, fully embraces the 1950s look when performing with the band, complete with greased-back hair and rolled up T-shirt sleeves.

“I have loved music for a long time, as well. Besides the Ramblers, I also play in a band that does older country songs and a third one that does more original stuff that we mostly perform at Churchill’s in Flint,” Pat says. “They are all a lot of fun to make music with.”

Pat, a 1994 Linden High School graduate, discovered his love for creating all things metal while in high school, and soon began honing his craft at local shops. Eventually, he started custom-building motorcycles at various businesses, including Grease Rag Customs near downtown Flint.

One of the bikes Pat helped build at Grease Rag was featured in a six-page spread in The Horse, a magazine based in Macomb County with an international audience. That motorcycle featured a taillight fashioned from an old flashlight and a can of Triumph beer, while the headlight was part of an airplane. The front wheel came from a dirt bike, and the front leaf-spring was part of a 1932 Chevrolet. The air cleaner even incorporated a dark yellow ashtray from Angelo’s Coney Island.

After he completes the motorcycles he is currently working on, Pat is looking forward to what his future projects might entail.

“I certainly plan to continue what I’m doing, because it’s been really enjoyable,” he says. “I will always keep looking for ways to build a better mousetrap – nothing overly fancy, but always very functional.”