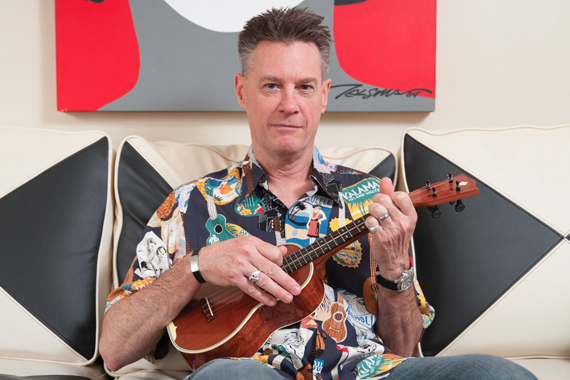 Dave Talsma is a talented, self-taught ukulele maker. When My City Magazine stopped by his Swartz Creek home to chat about his craft, the music of Cliff Edwards, a ukulele musician best known as the voice of Jiminy Cricket, was playing softly in the background. “I was always into art and fixing things and making things,” he laughs. Dave has intertwined his eye for art with his talent in building and design to create the unique stringed instruments that are purchased by uke lovers all around the world.

Dave grew up in Grand Blanc, graduated from Grand Blanc High School in 1978 and went on to graduate from Kendall College of Art & Design. His interest in ukes was passed down to him from his father Ray, a World War II veteran who was stationed in Hawaii. Ray was an avid accordion and ukulele player, having taken lessons as a boy during the 20s and 30s when that music genre was the rage. Later, Ray played in variety shows at the Grand Blanc Elks Lodge. “I learned to play from him,” Dave explained. Dave comes from a long line of craftsmen, his family of Dutch heritage having settled in western Michigan, home of well-known Talsma Furniture.

Making ukes became Dave’s hobby many years ago, but he started out by crafting a guitar. He was doing contract work for General Motors at the time and had noticed an employee’s cubicle filled with photos of guitars he had made. Dave was impressed with the handiwork, and the co-worker offered him use of his workshop should he be interested in guitar-making. So, Dave took him up on the offer and built his first guitar. “From then on, I was hooked,” Dave remembers. “I never thought of myself as a super-creative person; but I am meticulous and have an eye for detail.”

Dave soon moved on to making the instrument he really loves, the ukulele. He took the guitar he had crafted to a friend’s bike shop to use a spray-booth to paint the instrument. Someone at the shop asked Dave if he would make a ukulele. So, he did. In 1986, he made the first of many ukuleles in his basement workshop. At one point, he asked himself, What am I gonna do with all of these? He started offering them on eBay and sold one to wealthy California businessman, Dave Pasant, who soon after moved to the Lansing, MI area. Pasant owns a uke collection that Dave describes as “one of the biggest in the world.” They became friends and Dave has made several pieces for the eclectic collector. “He has some of the rarest ukuleles ever made!” exclaimed Dave. Pasant allowed Dave to measure, photograph and gather details about the instruments in his collection, which helped Dave to hone his craft. He also built a uke for Greg Hawkes, keyboardist for rock band, The Cars.

Building a ukulele can be tedious work – Dave says it takes him about six to eight weeks to complete one from start to finish. There four sizes, a Standard Soprano (the smallest), Concert, Tenor and Baritone. He can also make “in-between sizes” as he has molds in over 25 various shapes. “The Tenor is the most popular,” Dave explained, adding that people like it because it is easier to play and not so toy-like. Many people remember quirky entertainer Tiny Tim strumming the ukulele while singing “Tiptoe Through the Tulips.” “He almost killed the ukulele,” laughs Dave. “He made it a goofy, weird toy.” But that isn’t so today. Dave’s customers are currently on a one-year waiting list. He has made two ukes for business magnate Warren Buffett, and one for Grammy Award-winning recording artist, Marcy Marxer. And once a customer buys one, they want another, laughs Dave, who also does restorations and repair work. He has clientele as far away as France, England, Australia and Japan. “People find me by word of mouth,” he says.

Dave has kept many of the ukuleles he’s made as part of his own private collection. He even crafted one from his custom license plate. One of the more unique pieces is entitled Nightmare Before Christmas, which he made just for fun. Some are very detailed with Mother of Pearl inlays. Dave is also a huge fan of ukulele music. One of the most popular uke players was Israel “IZ” Kamakawiwoʻole, a Hawaiian musician most known for his rendition of Over the Rainbow. “He was so popular,” smiles Dave. “Every year on Hawaii, there is a huge celebration of his music and when he passed away, it was the island’s largest attended funeral.”

When he’s not listening to music or making ukuleles, Dave enjoys spending time with his wife Denise and riding his bicycle. He belongs to a biking club and travels a couple thousand miles each summer. “I just love bicycles,” he laughs. The couple’s daughter, Lauren, is following in her dad’s footsteps by attending Kendall College. Her primary interest is fashion design but she is also a talented artist and very good at drawing, her father boasts. The Talsmas are in the process of restoring their home. “It’s something I love to do,’ Dave says. “I like making old things like new.” If that isn’t enough to keep him busy, he teaches ukulele-building classes in his basement workshop. “I’m self-taught, so I feel a need to teach people how to do this,” he says. “I want to keep the craft alive.”