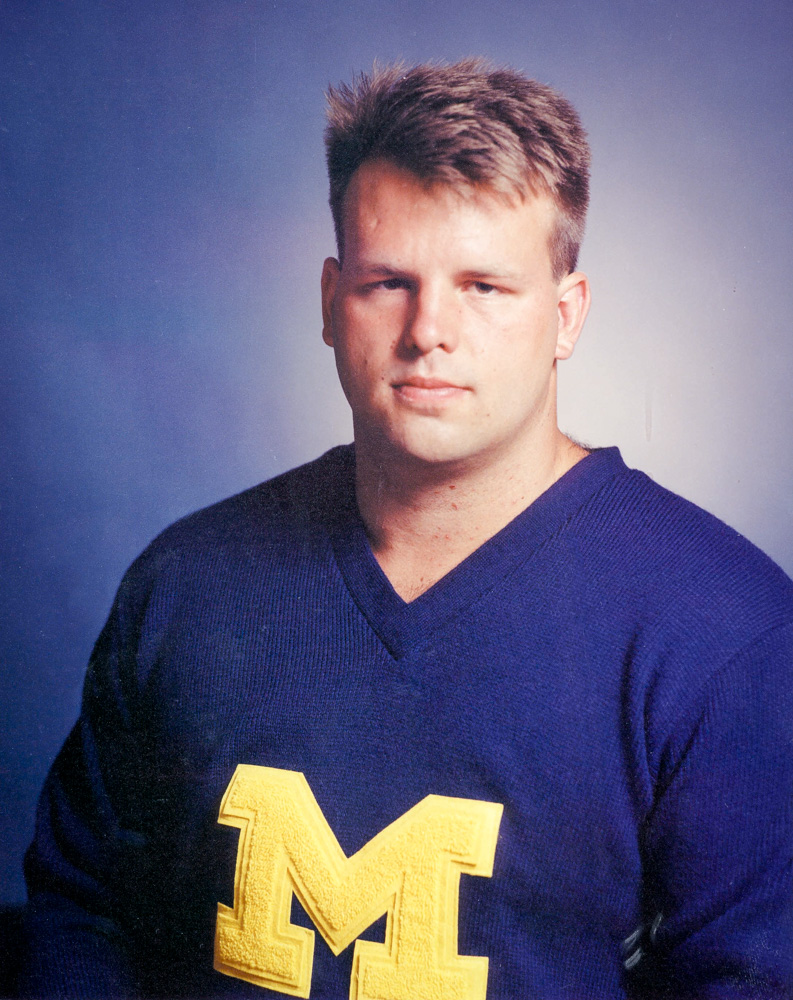 Jon Runyan has packed plenty into his nearly 43 years of life.

Along the way, the Flint native has repeatedly exceeded expectations, displayed a penchant for surprising people and despite all of his success, has routinely shown a generous heart that is even bigger than his imposing 6-foot-7, roughly 330-pound physical presence.

Consider that he did not play football until the 11th grade at Carmen-Ainsworth High School, but became an All-American offensive lineman at the University of Michigan.

He did not attempt organized basketball until middle school, but was offered a full-ride scholarship by legendary Michigan State coach, Jud Heathcote. 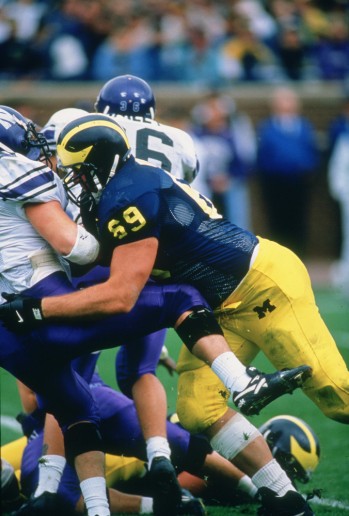 Less than a year after his playing career ended, Runyan was elected to the United States Congress in his northern New Jersey district – despite being a political novice – defeating an incumbent with more than 20 years of political experience.

Runyan’s life took another unpredictable turn earlier this year when, despite the fact he was known as a bit of a rule-bender in the NFL, Runyan was named the league’s vice president of policy and rules administration. In that role, Runyan is serving as NFL Commissioner Roger Goodell’s designee for imposing fines and suspensions for on-field infractions. Runyan, whose boss is the NFL’s executive vice president of football operations Troy Vincent, is in charge of the league’s inspection program for uniforms and safety equipment and works with the NFL’s rule-making competition committee, its player safety advisory panel and team representatives.

“The biggest thing so far for has been spending a lot of time studying the players union’s collective bargaining agreement and the official NFL rulebook to determine what is going to be a fineable offense,” says Runyan, who works out of the NFL’s office in New York City and his home in Moorestown, NJ. “Reports are going to come across my desk every week, and I will have to determine what action to take. I am getting up to speed on what uniform violations are now and will be working closely with officials to be sure we are re-enforcing what is being called on the field.”

Runyan says timing and the rapport he has with Vincent, his former teammate with the Philadelphia Eagles, led to him being offered the job in May.

“It was a matter of being in the right place at the right time because during my last nine months in Congress, I was being offered things left and right, but none of them panned out,” says Runyan, who left Capitol Hill after his second term ended in January of 2015. “When Troy contacted me about working for the NFL, though, it was something I was really happy to become a part of.”

“Jon’s breadth of experience from the gridiron to the halls of Congress brings a unique perspective shaped by leadership as a player and in public service,” said Vincent when Runyan was hired. “He is a welcome addition to our team as we work to advance and grow the game, and develop all football personnel and players.”

The irony of someone being in his current position who, in 2006, was ranked second on a Sports Illustrated list of the NFL’s dirtiest players is not lost on Runyan. 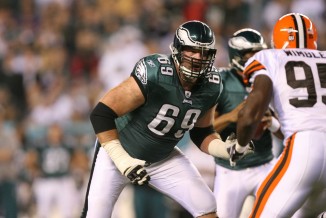 “That is what it is, and I would say I know the game and how to walk the line between playing physical and aggressively and breaking the rules; but the line has certainly changed since I played,” he says. “Changes have been made in the interest of making the game safer and a big part of my job will be to define what the line is now. I will admit that I pushed the line a little too much early in my career, and was close to having to meet with the Commissioner before I started to play smarter.”

Runyan is confident he will be ready when the regular season begins this month, at which point his life in general will be a little crazy with his son, Jon Jr., beginning his sophomore season with the Michigan football team, and his two teenage daughters heavily involved in athletics.

“There will probably be some weekends when I catch my daughters’ soccer games on a Friday then fly to Michigan to see my son play before attending an NFL game on Sunday,” says Runyan.

Runyan was an All-Stater in football, basketball and track at Carman-Ainsworth, winning Class A state shot put championships in 1991 and 1992. He actually ran cross country as freshman and sophomore before giving football a try as a junior.

“I was having success in basketball, but started to feel that maybe I could increase my chances of landing a Division 1 scholarship in football because there are so many more positions,” Runyan recalls.

“I seem to recall his mother being afraid Jon would get hurt,” says Domerese. “He was prepared, though, because our throwing coach [Mike Stuart] started Jon on a weight-training regimen in the ninth grade and also taught him footwork to use in the shot put that transferred well to football. It is pretty amazing what Jon has accomplished in his life when he’s had his share of doubters. I remember taking bets from people who said he wouldn’t play a down at Michigan.”  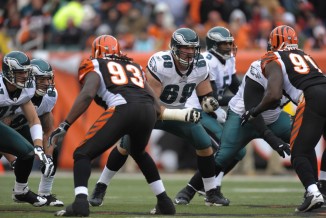 Runyan committed to Michigan a few months after leaving the Michigan State basketball offer on the table.

“Jud Heathcote made me an offer in my parents’ living room, but I told him I had to wait and see how football offers were going to pan out – and he walked out,” Runyan says. “I wanted to play college ball close to home and Michigan was perfect for that.”

Runyan improved steadily at Michigan and was named All-Big Ten and a third-team All-American as a senior in 1995, increasing his NFL draft stock. He was drafted by the Houston Oilers the following spring and won a starting offensive tackle spot as a rookie. The team moved to Nashville, TN the next year and Runyan began an impressive streak of longevity, starting every game from 1997 through 2008.

The Oilers became the Tennessee Titans in 1999 and made the Super Bowl before falling to the St. Louis Rams 23-16 when Kevin Dyson was tackled a yard shy of the end zone as time expired.

Soon after that Super Bowl, Runyan signed with the Philadelphia Eagles and spent the next nine seasons there, making the Pro Bowl in 2002, being named the team’s Offensive MVP in 2005 and to the Eagles’ 75th anniversary team. He helped the Eagles to the Super Bowl in 2005 when they dropped a 24-21 decision to the New England Patriots. 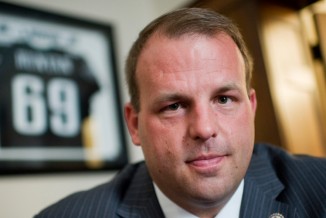 A 2008 ESPN.com survey revealed that being blocked by Runyan on a screen play was something defensive players feared most at the time.

After spending a season with the San Diego Chargers in 2009, Runyan retired. He played in 207 games overall and started 21 playoff games, second to only Gene Upshaw among offensive linemen.

“The No. 1 thing I miss about playing in the NFL is the paycheck,” Runyan jokes. “I also miss being able to deliver hits in ways that would have gotten me arrested off the field. It was great to just lay it all on the line and try to win the battle of wills. I was part of many memorable wins, but it’s the tough losses like the two Super Bowls that really stick with you.”

Also during his time in the NFL, Runyan began sponsoring the Jon Runyan Classic track meet which is held annually at Carman-Ainsworth.

“That just shows Jon’s generosity and how he never left his roots behind,” Domerese says. “There are times when we’ve needed something for our athletic programs and Jon has been there. It’s funny when he comes back and we’ll be talking in the school, kids kind of stop in their tracks and ask me later who that guy is because Jon has a pretty imposing presence but has always been hardworking, humble and giving.”

In New Jersey, Runyan serves as chairman of the Wish Upon A Hero Foundation, Vice President of the Delaware Valley Alzheimer’s Association, and Advisory Board Chair of SNJ Business People, which develops strategic partnerships in the region.

Runyan was first elected to Congress in 2010, winning a seat from incumbent John Adler, and was reelected in 2012. He served on the House Armed Services Committee and the Committees on Veterans Affairs and Natural Resources.

Among other things, Runyan pushed for automatic cost of living adjustments for veterans’ benefits and suspended his 2012 re-election campaign to visit victims of Super Storm Sandy in his district to secure aid for them.

“I ran for Congress as another way to serve my community, but realized soon after I got there that the community service part has kind of fallen by the wayside,” Runyan says. “The biggest thing in Washington that disappointed me was how so many politicians talked about things that were never going to change instead of trying to change the things they could, and not serving their own interests. I am proud of what I did for the district, especially the large veteran population we have here.”

Now, Runyan is excited about serving the NFL.

“My goal is to make myself irreplaceable by figuring out the best way I can do my job, and then how I can help others with their jobs,” he says.

In many ways, Runyan has already proven how irreplaceable he is.