For Flint native, Jasmine Hall, things have come full circle. While studying at Harvard University, her mind would often wander to thoughts of Flint and how, one day, she would return home. After graduating from the Ivy League school this past May, earning a master’s degree in neuropsychiatric epidemiology with concentrations in public health leadership and population mental health, Hall has returned to her beloved hometown with the goal of making a difference. And that goal is well on its way to being met as she will be working under the direction of Dr. Mona Hanna-Attisha, the local pediatrician whose own research exposed Flint’s water crisis and who directs the Flint Registry.

Hall grew up on the city’s north side, the middle child of her mother’s seven children. There were two periods of time when her family was homeless, and was forced to live in homeless shelters. She was in the fifth grade when her family first experienced homelessness. “We always lived below the poverty line,” she remembers. Life was challenging for her family that year, but Hall continued her studies and even received the Principal’s Award the following year before transitioning to middle school. She was a freshman when her family was again without a home. “It was stressful, but it was super-humbling and brought my family closer together. I listened to other people’s stories about how they became homeless, and got to know who people were and what they cared about.” 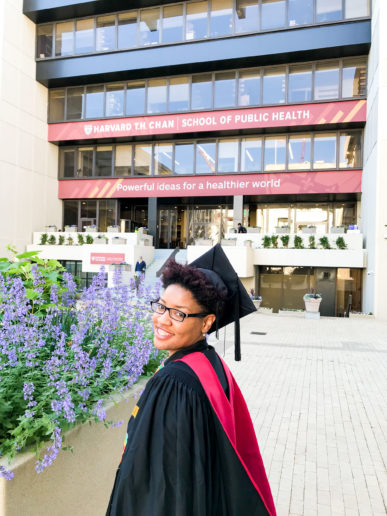 There was one constant in Hall’s life and that was her love of learning. “I fell in love with school really early,” she shares, starting with when she attended kindergarten at Dort Elementary School. “My teacher, Ms. Collins, encouraged my love of reading. I absolutely love books!” And, she gives a lot of credit to her mom and Aunt Mel, who taught her and her siblings the importance of getting a good education and being kind to people.

While attending high school, Hall was involved in TeenQuest, a program through the Flint & Genesee Chamber of Commerce. “It taught me so many transferable life skills that I continue to use today,” she shares. She also attended the Health Careers Opportunity Program at University of Michigan – Flint during her sophomore and junior years, which helped her realize she absolutely wanted to pursue a career that allowed her to help improve population health.

Another local program that had a powerful impact on Hall was the Quinn Chapel AME Church Debutante Cotillion Program (now led by the Flint Chapter of Delta Sigma Theta Sorority, Inc.). Becoming a debutante was both a mentoring and etiquette opportunity for young Black women through a series of workshops ranging from community service to practical advice for furthering education. “That helped me solidify my decision to go to college,” she remembers. Hall graduated 2012 class valedictorian from the Classical Academy (currently Southwestern Classical), which was an International Baccalaureate (IB) program of the Flint Community Schools.

Hall continued her education at Central Michigan University with a full-ride scholarship. She had many other schools to choose from, but CMU captured her heart. “It was the only campus that felt like home when I visited,” she says.

“I want to see the city as a place people are moving to, not away from.” Jasmine Hall

Three programs really stood out as especially influential in shaping Hall’s college experience. The first was a program she was on the other side of before college: MI GEARUP, which connects first generation 7-12 graders in urban and rural communities to the State’s public universities through College Positive Volunteers (CPVs). She volunteered all four years in Flint and Harrison MI, working summer camps, conducting workshops for pre-college students, and leading training for college students who wanted to become volunteers (CPVs). Hall was a Multicultural Advancement Distinction Scholar, as well. “It gave me a tool kit,” she states. “Through this scholarship, we gained both a language and an appreciation for a vast array of identities as a cohort.” This awareness led her to begin learning about social determinants of health.

The final program was the CMU Honors Program. “This encouraged me to ‘aim higher and achieve more meaningfully,’” she shares. “It got me interested in doing scientific research and studying abroad in Singapore.”

After graduating from CMU, Hall moved to Boston and began serving with AmeriCorps (VISTA,) a voluntary civil society program supported by the U.S. federal government with a goal of “helping others and meeting critical needs in the community.” While there, she applied to Harvard University. It was the only school she applied to and once accepted, she attended classes for two years and obtained her master’s degree. “Harvard was a roller coaster,” she says of the experience. “It was a place where I personally realized how important it is to continue to learn both in and outside of the classroom.” 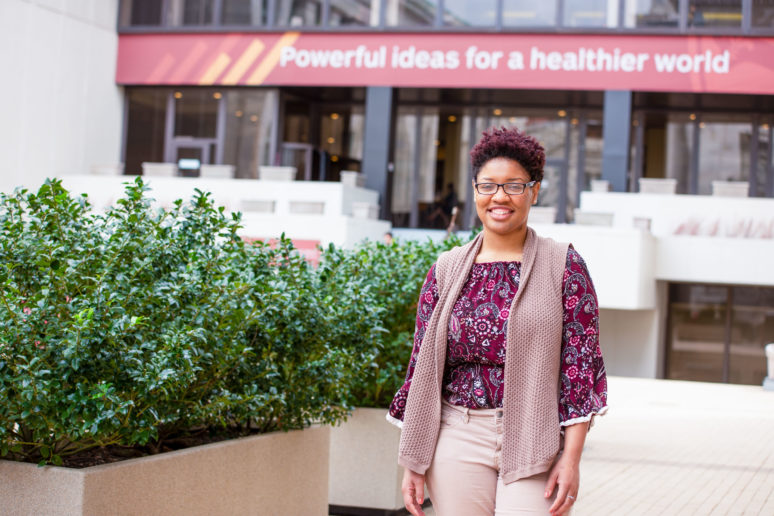 Now back in Flint, her beloved hometown, Hall is happy to be, once again, surrounded by friends and family. She is also pleased to see the revitalization efforts taking place in Downtown Flint and looks forward to renewal efforts on the north side. She especially loves the Flint Farmers’ Market as it supports healthy eating and a healthy lifestyle, which is very important to her. As a vegetarian, she encourages the community to get plenty of fruits and vegetables and policy makers to ensure that healthy food and water are accessible.

Hall looks forward to working with Dr. Mona. “I respect and admire her. I am honored to pitch in to help give Flint kids the best possible health outcomes,” she says. The successful young adult hopes that the Flint Registry will show how the community is recovering and provide data to advocate for what the community needs after the Water Crisis. In addition, the Registry connects local children and adults to services that promote good health and well-being. “This is right up my alley!” she exclaims.

Hall has watched how Flint’s lead-poisoning Water Crisis affected the community, including her own family. Now, she is ready to roll up her sleeves and get to work.

“I am just grateful to be back in Flint and I can’t think of a more meaningful place to do public health. I look forward to learning from folks who have been doing the work and thinking of ideas,” she says. “I want to see my home better than it has been. I want to see the city as a place people are moving to, not away from. I want to help make that happen because I love Flint.”