“For us, Flint really is the selling point. Maybe our story will inspire others to love Flint as much as we do.” 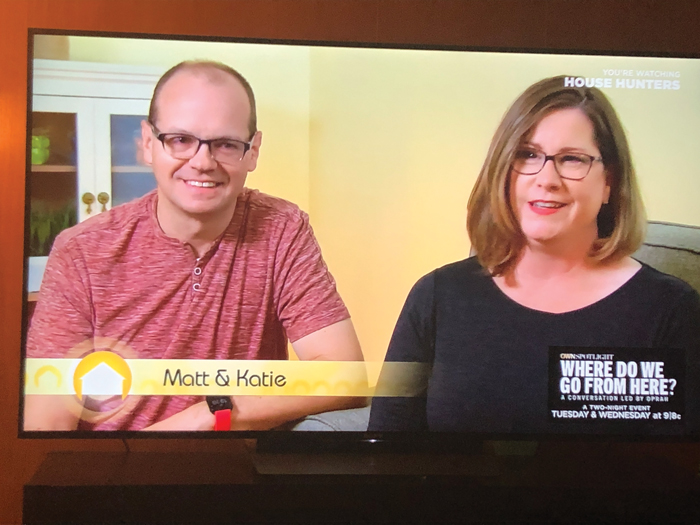 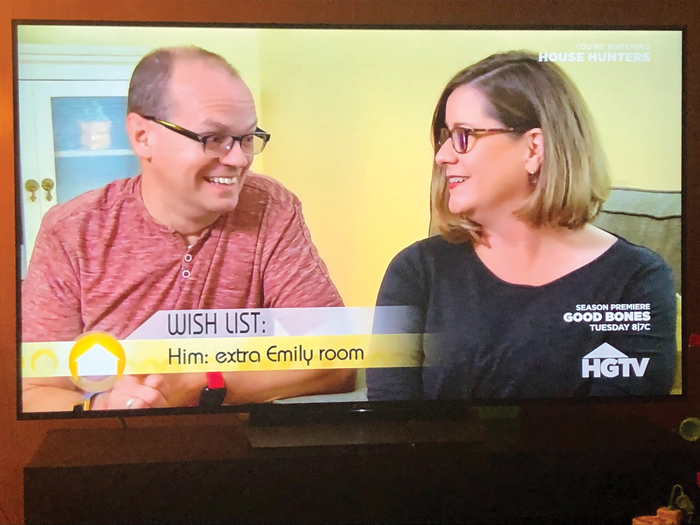 Well-known in the Flint area, Matt and Katie Bach worked for The Flint Journal for many years. And now, the couple has turned the national spotlight on Flint, after appearing in an episode of HGTV’s “House Hunters – Investing in Flint,” which debuted on June 8. “We stayed up late to watch it!” Matt exclaims. “We were very excited to watch the show and were not disappointed. They really did a nice job with it.”

The show highlighted the Bachs as they looked at three houses along with their Realtor, Jonathan Schlinker of RE/MAX Edge. They didn’t choose the craftsman-style home with the built-ins in Flint’s historic Carriage Town. They didn’t go with the all-brick Tudor with the pool and renowned Flint Faience tile accents. They decided to buy the fixer-upper ranch located in Flint’s Historic Woodcroft Estates.

The “House Hunters” episode showcased the couple locked in a typical “his and her” disagreement over what kind of house they wanted. Matt wanted a home with a pool, a finished basement and space for their daughter and grandson. Katie wanted a ranch-style home in an established neighborhood. “I wanted everything our house in Grand Blanc DIDN’T have,” she says. 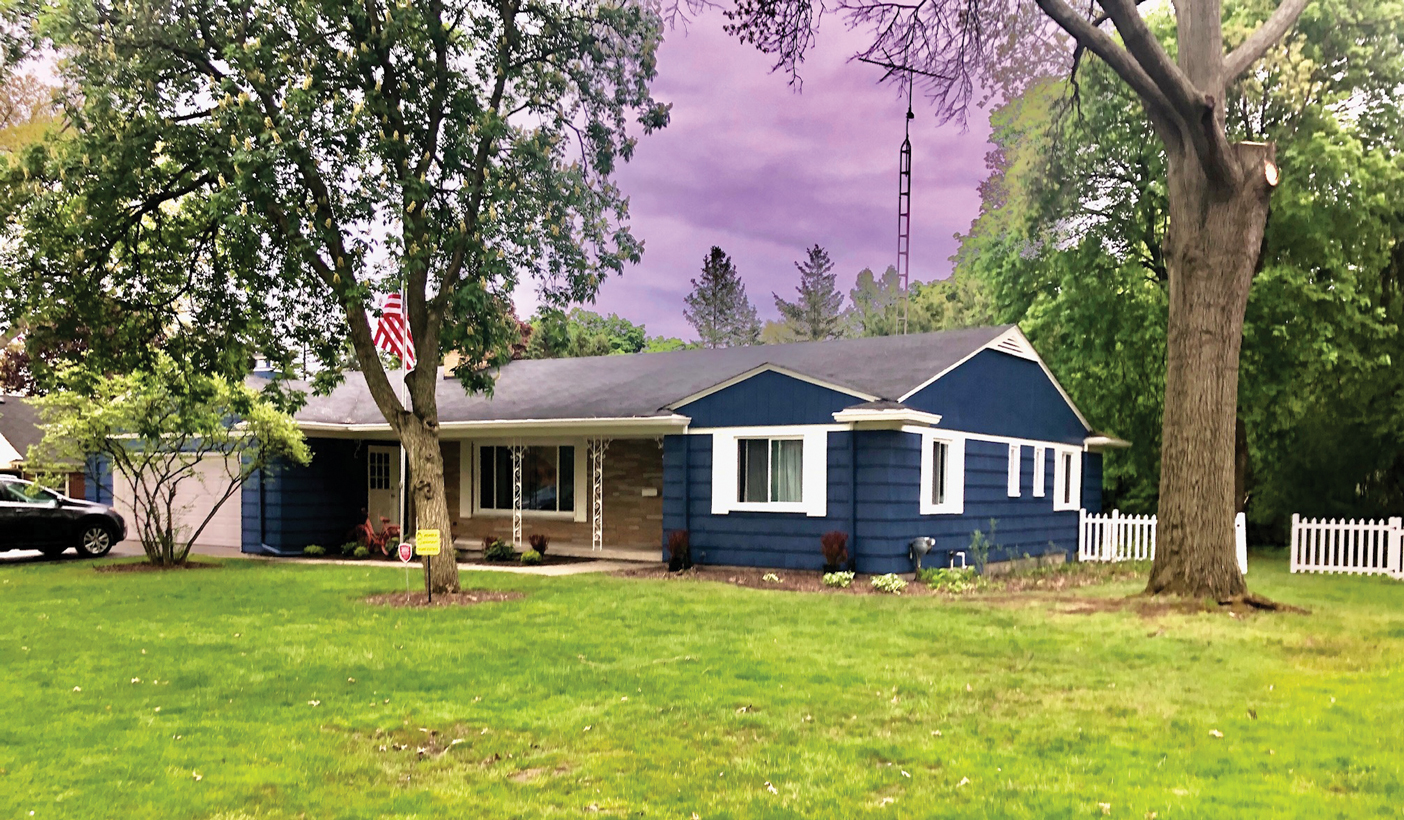 But, they agreed on one thing – they wanted to invest in a home in the City of Flint to support the community’s rebound from decades of challenges, including the downturn of the auto industry and the water crisis. The couple became visibly emotional during the episode when talking about their love of Flint and the passion and resiliency of the community.

They also agreed that eventually, they wanted their daughter, Emily, and her two-year old son, Emmett to be able to move out of the family home and be on their own. Emily’s desire to stay in the Grand Blanc area was one of the tension points captured in the episode. Since then, Emily found a home in the Flint College/Cultural area and are in the process of purchasing it.

So, who won? “Katie did!” Matt laughs. “We went for fixer-upper ranch,” Katie adds. “It was a tough decision. We had three great options. Jonathan did a great job finding three different styles.” The one-story house has three bedrooms, a garage, a tree-lined street and sidewalks. “We really love the neighborhood,” says Katie. 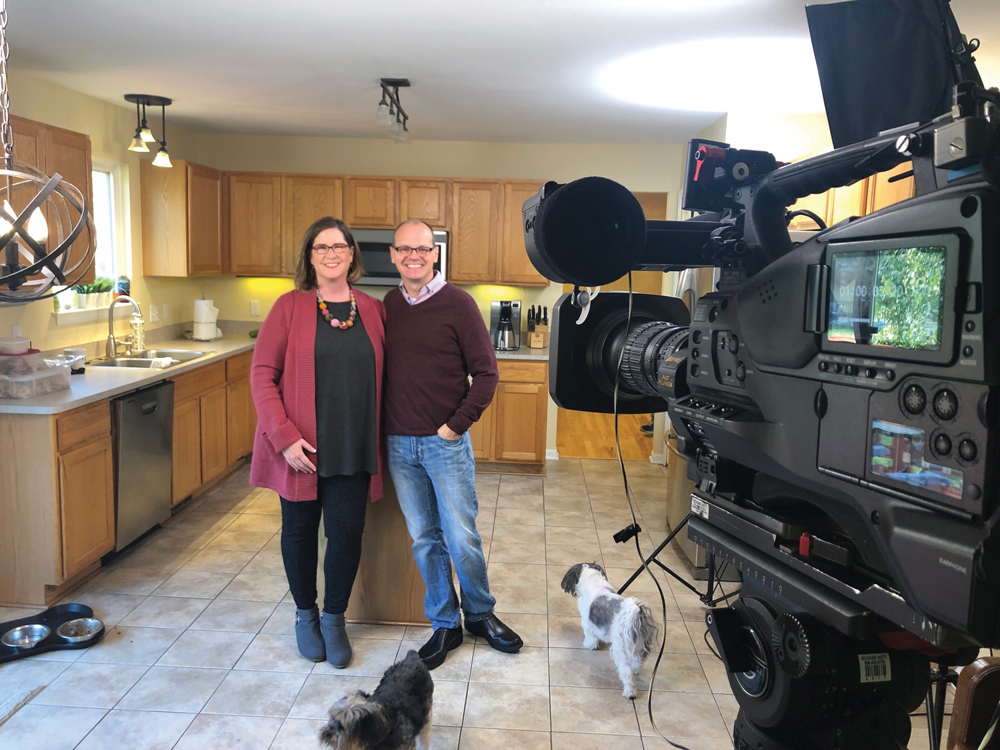 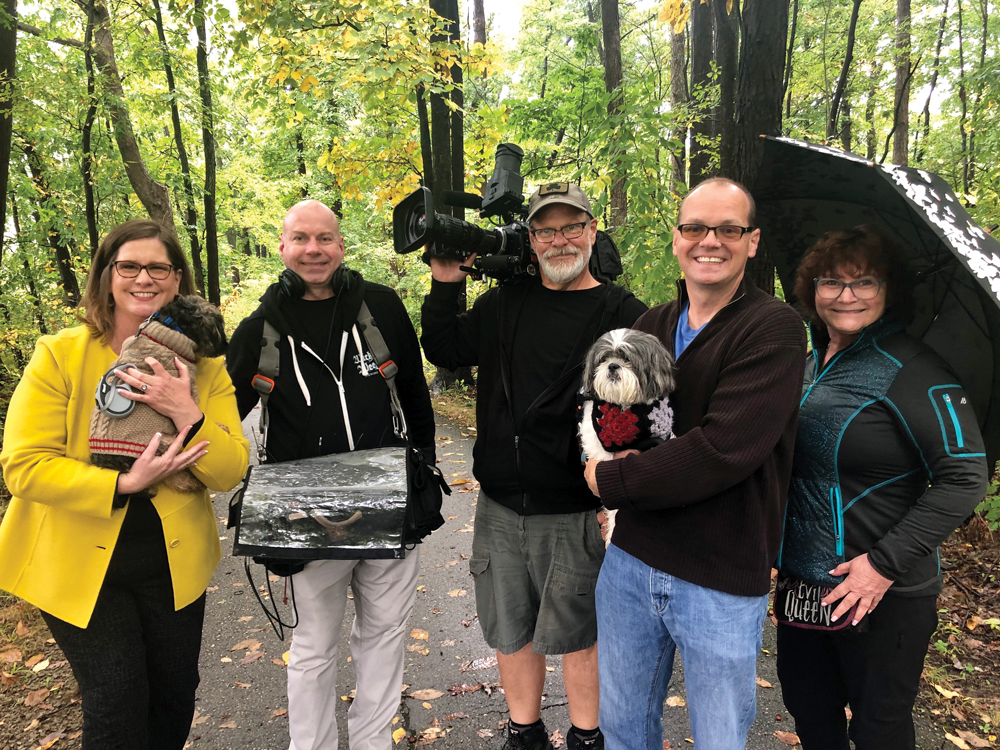 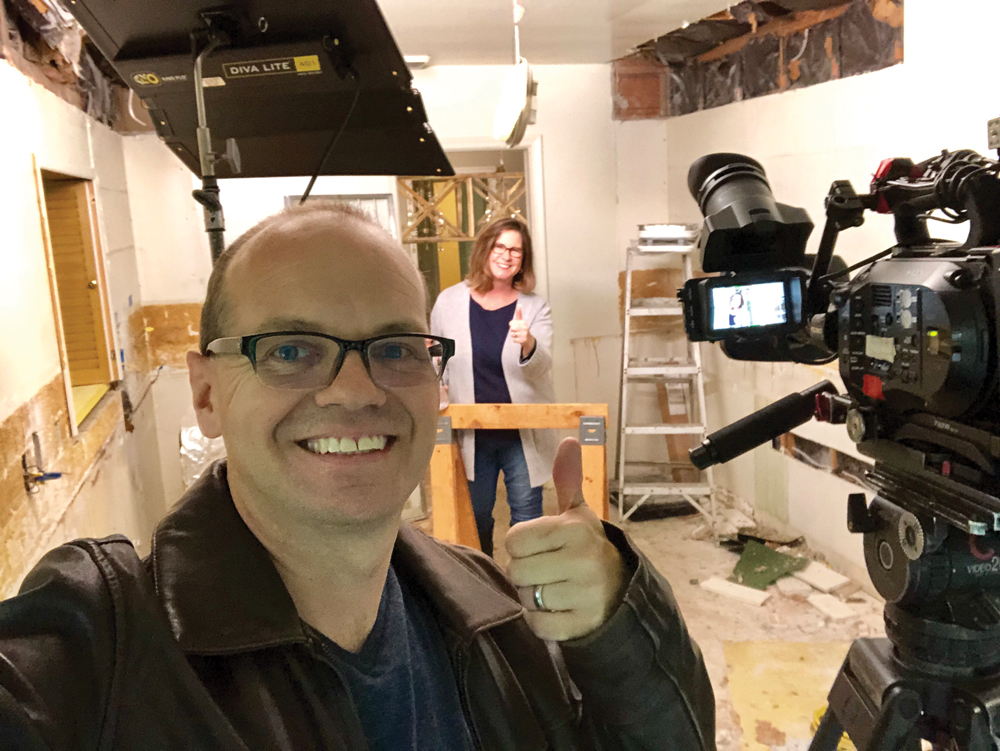 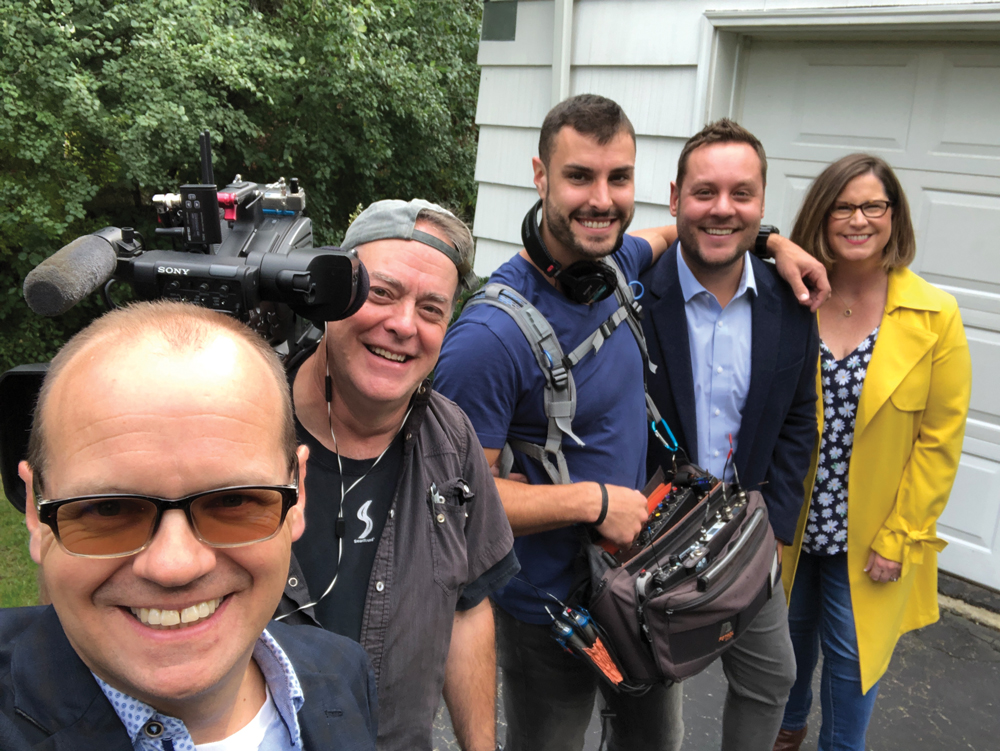 “The journey became more about discovering that place that made us feel whole. And Flint was home.”
Katie Bach

One of the episode’s final scenes showed the couple in a gutted kitchen illustrating that the many improvements they cited when touring the house were underway. Since then, they have gutted the bathroom, put in a new kitchen, new windows and refinished the hardwood floors. The home’s exterior has also been changed – it was white with black shutters and is now dark blue with white shutters. As for Matt’s swimming pool? It’s on order for later this summer.

The show was filmed last fall and featured lots of footage from Flint, including the Downtown Business District, Farmers’ Market and Stepping Stone Falls. In one scene, the couple was interviewed walking the nature trail at Ascension Genesys Health Park in Grand Blanc Township with their dogs, Chester and Chewy. And according to Katie, it was unscripted and very natural. “The show producers put us at ease and were a pleasure to work with,” she says. “It was a lot of fun.”

Jonathan Schlinker, Realtor with RE/MAX Edge, has watched HGTV’s “House Hunters” for 20 years. “It was a dream come true for me to be on the show,” he says. “It’s the first time in the show’s history that they’ve come to the City of Flint.” Schlinker, who specializes in selling Flint properties, believes that with all of the negative news about Flint, HGTV picked up on how passionate the Bachs were about moving there. “I think the producers were intrigued,” he believes. “We told them about the positive things here.”

Married 26 years, the Bachs have two children: Emily, 22 and Zach, 26. Matt is director of communications for the Michigan Municipal League (MML). Katie is director of communications at the Michigan State Housing Development Authority (MSHDA). Both organizations strongly support placemaking as an economic driver for the state. “The amazing placemaking work happening in Flint is a key reason Katie and I moved here and why we applied to have our search for a Flint home featured on an episode of “House Hunters,” Matt explains.

“While the show focuses on our family and our home search, it’s really more about Flint and the amazing architecture and amenities the city and area have,” Matt shares. “I think it did open some people’s eyes about Flint.” 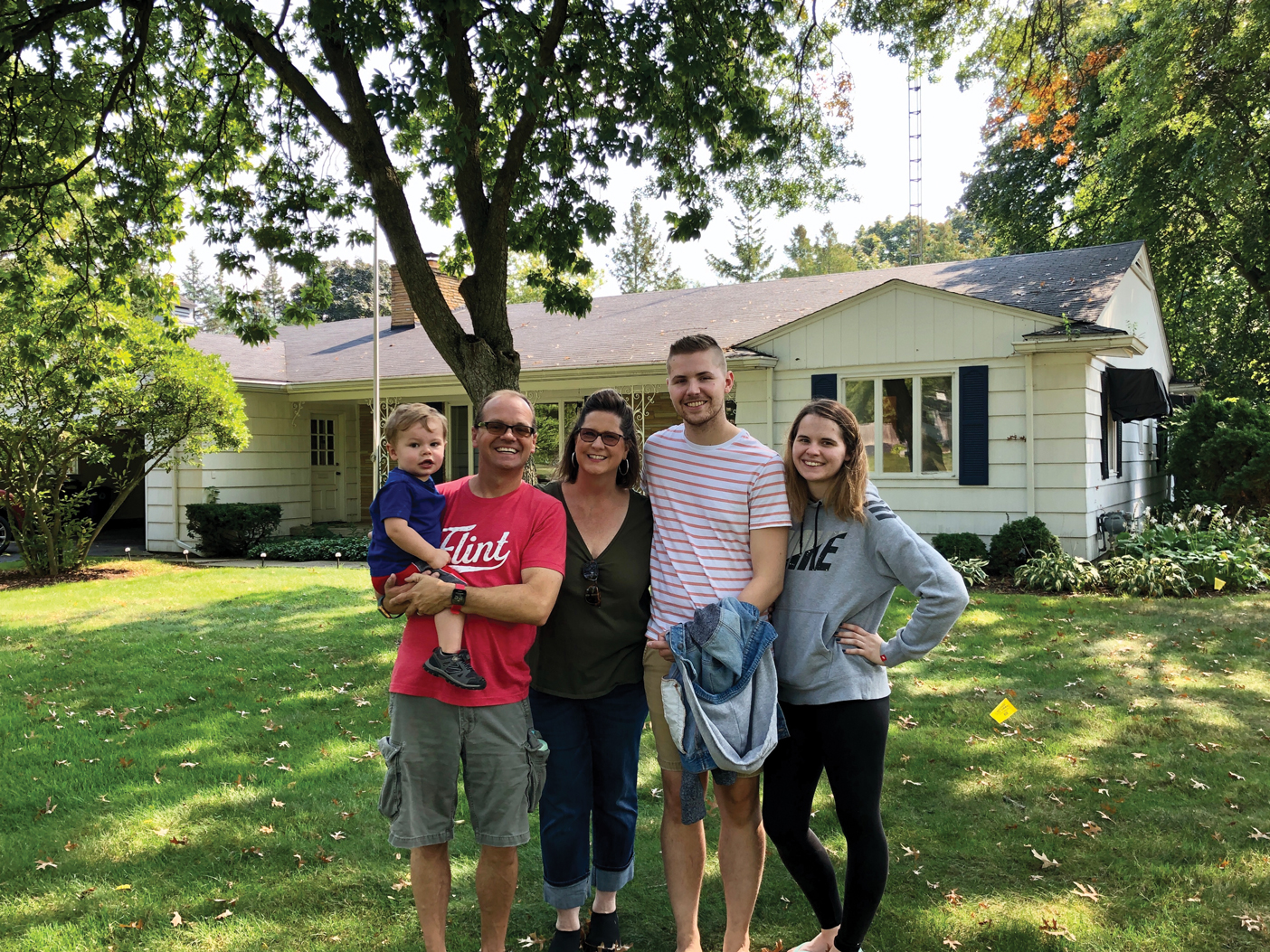 According to Matt, there was quite a Twitter discussion happening when the episode aired and his favorite Tweet was from a complete stranger named “Mr. Insufficient Funds,” which said: “Flint is the selling point.”

“I was so happy to see that because it’s true,” Matt notes. “For us, Flint really is the selling point and we want everyone to know that. Maybe our story will inspire others to love Flint as much as we do. And just maybe, they’ll want to invest in Flint or some other Michigan community, too.”

Matt works in Ann Arbor and Katie works in Lansing, and it would have made more sense, logistically, for them to buy a home somewhere in between. “We looked at places in those areas, but something was missing,” she says. “When we let down our guards and started caring less about just finding a house, the journey became more about discovering that place that made us feel whole. And Flint was home. It has been and continues to be our social and cultural center and we want to be part of its resurgence. We’re not only investing in Flint; we’re invested in Flint.”