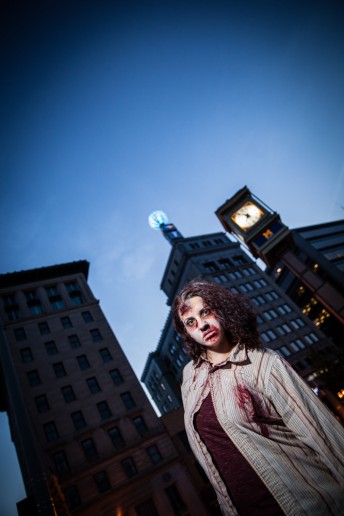 It’s that time of year … when scary things happen and zombies are spotted all around the Greater Flint Area. My City Magazine went on a quest to see what they could dig up and we didn’t have to dig very far. Kristina Lakey of Flint is an interpreter for the deaf by day – but by night, she can be found shambling around town as a zombie. The founder and organizer of the Flint Zombie Walk, Kristina is transformed (through the use of artfully applied makeup and tattered clothing) into one of the hundreds of mindless creatures that take over Downtown on the first Saturday in October.

The Flint Zombie Walk is a nonprofit organization under the umbrella of the Flint City Theater, and funds raised during the event benefits a different charity every year. Participants of the walk come from all over and the turnout ranges from 500 to 700 zombies. The event includes raffle drawings, a costume contest and a variety of vendors. “Flint is considered the Zombie Walk in the state!” Kristina exclaims. “They come from everywhere.” Kristina also teaches zombie wannabes how to dance to the music of Michael Jackson’s iconic Halloween anthem, “Thriller.” A performance of “Thriller” at Zombie Walk is a crowd favorite. Why the interest in zombies? “I grew up loving horror films. I would watch them with my mother at a very young age,” Kristina laughs. “Zombies scared me the most.” 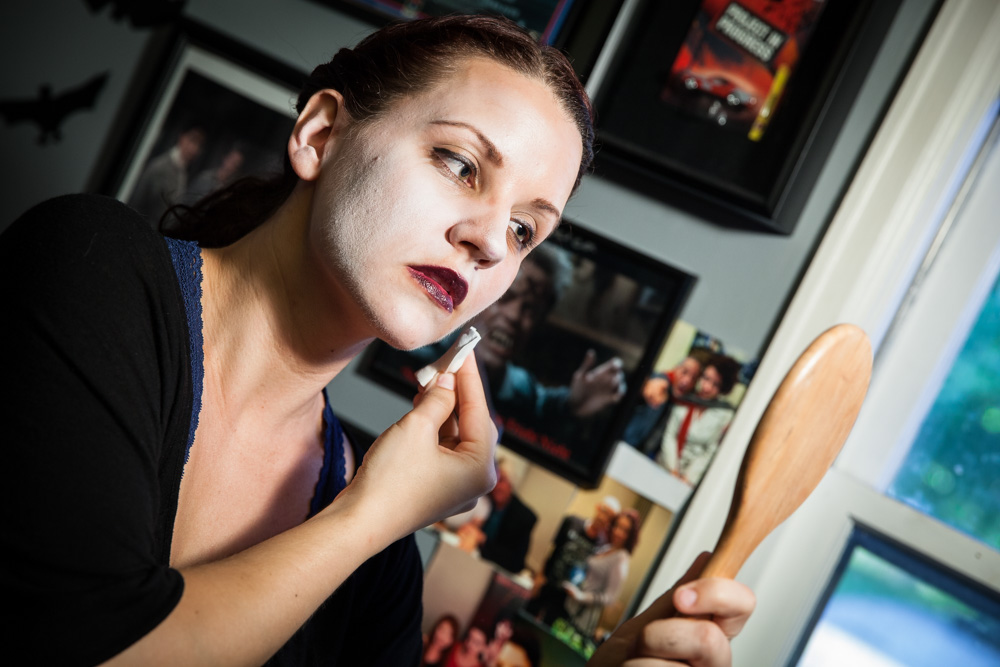 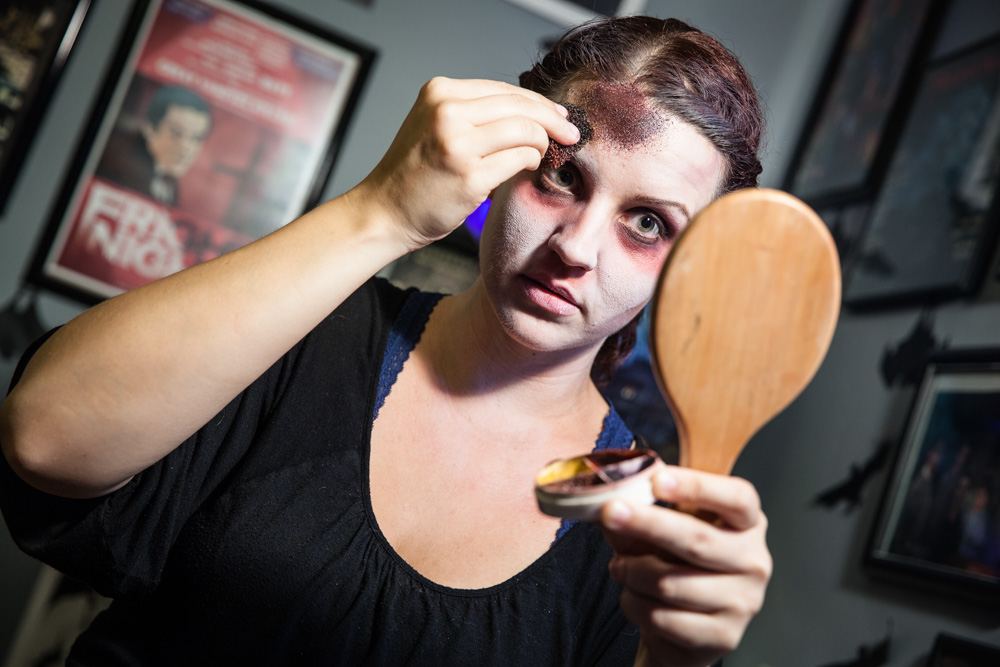 Breaking out the makeup kit, the first thing Kristina does is pale her skin, and then she shades and highlights her cheeks and her eyes to make them look sunken. Next, she applies more makeup to add realistic-looking wounds to her forehead. Her hair is made to look messy with the use of white powder. She changes her clothes – “Barbara” chooses bell-bottomed jeans and a ripped, blood-stained shirt. “Zombies wear whatever they were buried in when they died,” Kristina says. The last part of the transformation is learning how to walk, or “shamble” like a zombie. “You move as though your limbs are stiff and like walking is very difficult,” she explains. “And you limp a little, like your ankle is broken.” And then, there is the “zombie stare.” “You stare straight ahead as you walk – until you find something you want to eat.”

Finally, the transformation is complete, and “Barbara” is ready to venture Downtown. She was spotted at the Flat Lot on Saginaw Street, showing her aggressive nature when she tried to attack one of the Automotive Pioneer statues, a city landmark. This made her thirsty, so she shambled on to Table & Tap, where she sat at the bar and ordered a drink made especially for her – a Zombie Killer. Barbara then continued down the street, her stare interrupted when she passed a zombie dress on display at a clothing store. “I want that dress,” she groaned, as she tried to claw her way into the store. The evening’s activities made Barbara hungry. She spotted a nice couple sitting outside enjoying the late summer weather on the patio at 501 Bar & Grill. As she snuck up behind them, they didn’t realize that it might not be their lucky day. 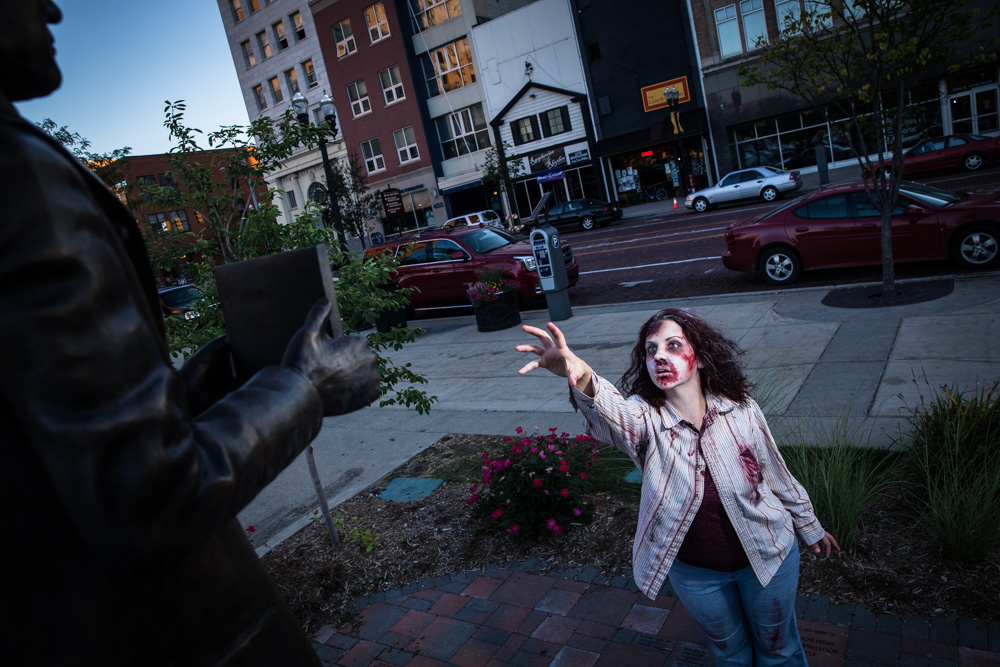 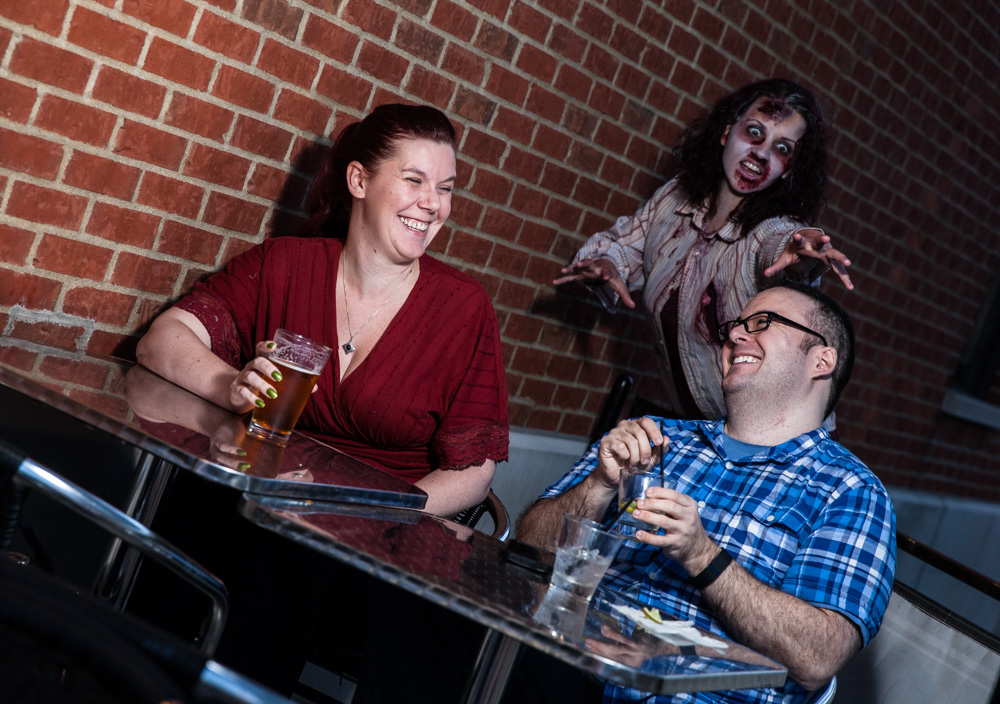 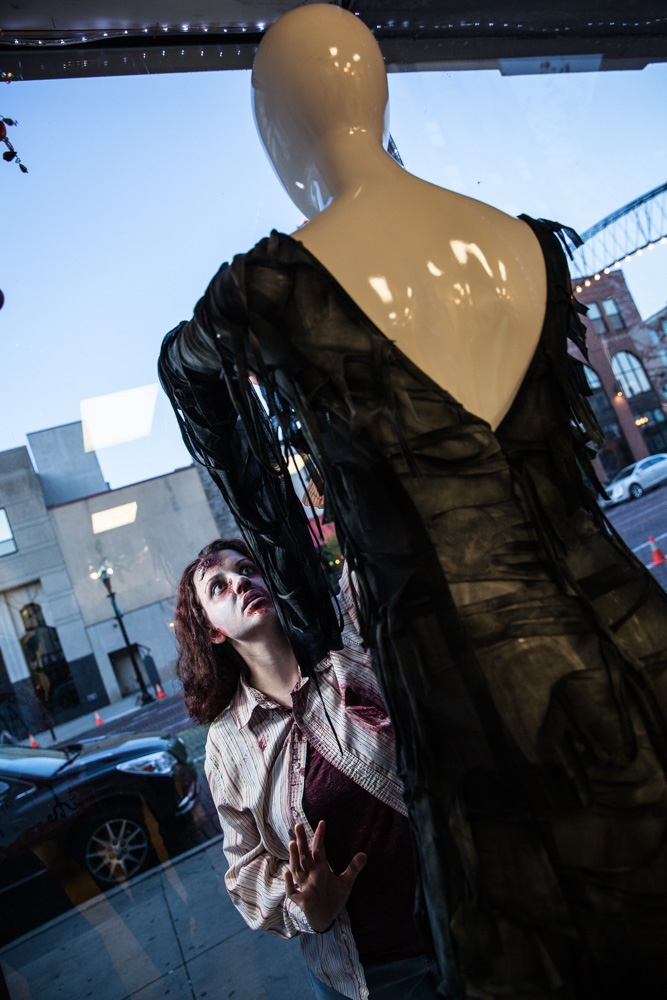 Having had more than enough zombie fun for one night, Barbara returned to her normal self and went home where her husband, Dan and their daughter, Willow were waiting for her. My City had just one more question for Kristina: Why are so many people interested in zombies? “People like to be scared,” she laughs. “We really don’t know for sure what happens after we’re dead. As a zombie, I get to live that out a little bit.”