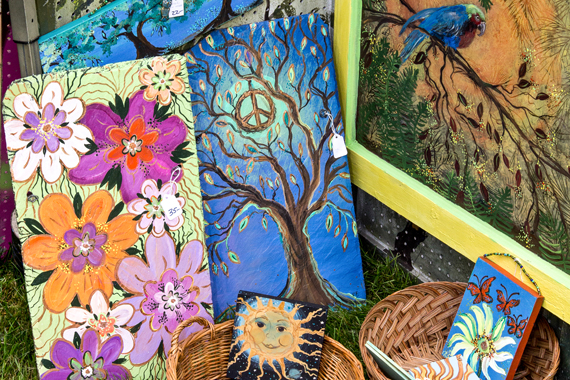 Artists and admirers alike celebrated 46 years in operation at the annual Flint Art Fair, hosted by the Friends of Modern Art on June 8 and 9. Situated once again on the grounds of the Flint Institute of Arts, spanning from the Flint Youth Theatre and Longway Planetarium to the Flint Public Library, over 100 artists from all over the United States came to display and sell their works. Several food vendors accompanied the art exhibits on the grounds, and eight live bands entertained attendees over the weekend as well.

The Flint Art Fair has been well attended each year, and the grounds of the FIA teemed with a diverse crowd of art aficionados, appreciators and aspirants enjoying the fairly cooperative spring weather.

This year’s featured artist was collagist Deborah O’Keeffe of Staunton, VA, who says she started making collages by “doing book art and branching out from there.” Her artwork is fashioned by pieces of paper that are assembled, glued down and later set with several coats of polyurethane varnish. Deborah has been making collages for 15 years, seven of those as a professional, and 2013 marks her third year at the Flint Art Fair.

A jovial mix of vendors and patrons exchanged pleasantries and transactions each day. Local glass artist Kimberly Osterwyk shared with My City Magazine the inspiration for her art, her history at Art Fair, and what she likes about the event. “I’m all about color; lots of it. It’s happy,” she smiled. “This is my fourth year at Art Fair, and I’ve exhibited here for the past ten years. It’s fun! I see old friends from Flint that I haven’t seen in years.”

The wide range of featured artwork makes the Flint Art Fair a venue for a family outing. Eleven-year-old Katie Lengyel picked out art with her mother Jenny to give as gifts to school faculty and friends. Katie mentioned that she liked “the different pieces of art and all the different things” she gets to see at the Flint Art Fair.

The Friends of Modern Art is comprised of several volunteers who not only put on the Flint Art Fair, but also several other FIA events, including the fall and winter film series and FIA art exhibitions. Along with the help of seven sponsors, FOMA once again provided the public an eventful affair and a major happening that ushers in a summer full of art activities in Flint.

Are you interested in purchasing photos from this story? Go HERE and select the “Art Fair” category.