Gabrielle Anzalone rounded the final turn of last December’s California International Marathon, anticipating the finish line coming into view, but unsure of what time the clock above it would read.

“I was averaging about 5:54 minutes per mile before slowing down a little over the last six miles, but felt I used the right race strategy,” recalls Anzalone, a 3,200-meter state champion at Grand Blanc High School and All-Big Ten track and cross-country performer at University of Wisconsin. “Still, I was not sure what kind of time I was going to finish with.”

Striding around the bend, Anzalone saw the clock was approaching two hours, 36 minutes. That meant covering the final stretch in less than a minute would put her under the “A” qualifying standard for the 2020 Olympic Trials. Those meeting the standard are compensated for their travel expenses to the Trials in Atlanta. 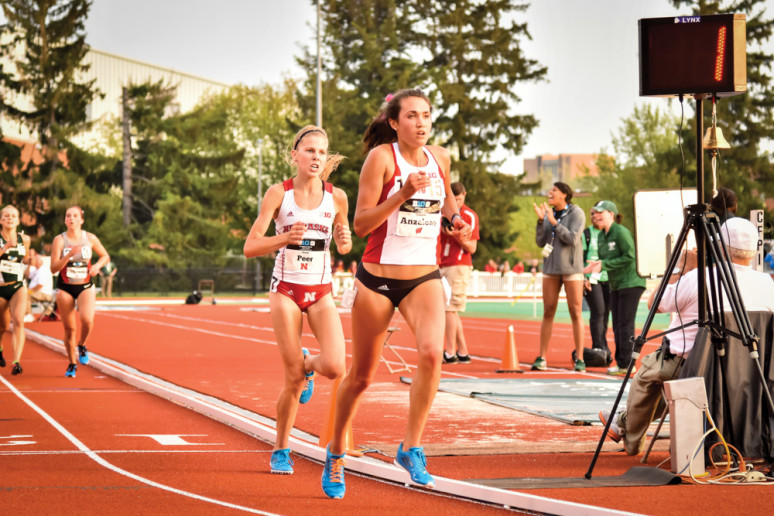 “I knew I would not be very happy with myself if I didn’t finish in under 2:37,” says the 24-year-old Anzalone, who now lives in Madison, WI. She dug deep and dashed to the finish, crossing the line in 2:36:46, good enough for 13th place in a loaded women’s field.

“It’s hard to put into words the elation I felt at the finish line – lots of tears, joy and giving thanks for all the support,” Anzalone says of the first marathon she has ever completed. “It was not easy to train while working, trying to earn my master’s degree (in social work) and dealing with some self-doubt and disappointment after my first marathon attempt – but going through of all that was worth it.”

Anzalone’s time in the event run through the streets of Sacramento was also among the top 50 by American women in 2017 and she was the only runner under age 25 on that list.

Sharing in the emotion of the achievement was Thomas Breitbach, Anzalone’s coach for the past two years. 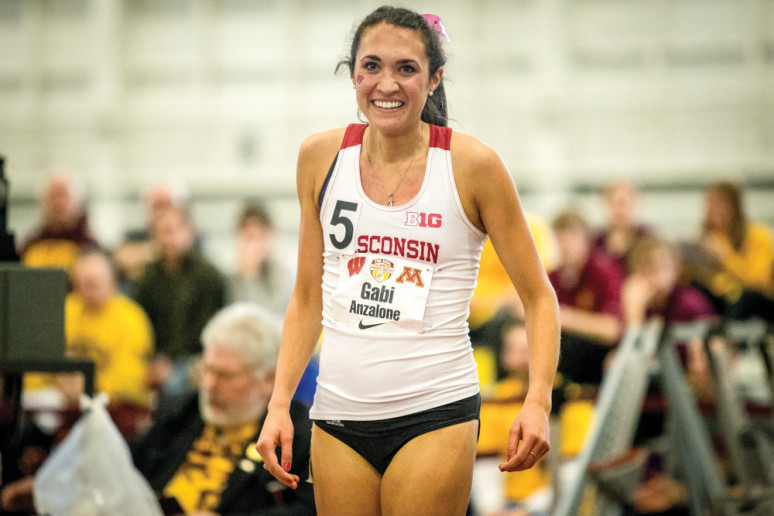 “Resilience and grit are essential qualities in an elite distance runner, especially in the marathon,” he says. “At Cal International, Gabi displayed those qualities, putting herself up in position, engaging with the competition, continuing to press while staying positive during the toughest spots. We didn’t talk explicitly about trying to hit the A standard and I think that really was a positive on all fronts. Gabi’s at her best when she is just being herself.”

Making Anzalone’s accomplishment even sweeter was that it erased the nightmare of her first marathon attempt in Chicago less than two months earlier. The Chicago Marathon’s flat, fast course is normally tailor-made for those seeking a fast time, but Anzalone realized before the race was even half over that it was not going to be her day.

“I did not race really smart, went out a little too fast, and was feeling pretty bad by mile 12 and even worse by mile 15,” she says. “I decided to continue to mile 21 where I knew my mom would be.”

Once there, Anzalone dropped out of the race.

“I knew there was going to be a lot of tears and heartbreak in not finishing because I worked so hard to prepare, but I learned so much from the experience,” she says. “In California, I went out at a more conservative pace and was feeling very good about seven miles in.” 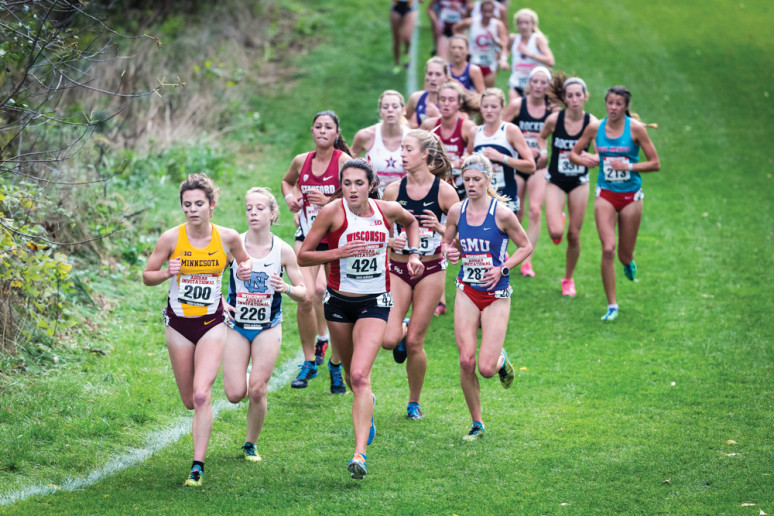 Anzalone then made an important decision. “I could stick with a group of women who were going to finish in about 2:40 or go with a group that was going to run around 2:32,” she says. “I just went for it and stuck with the faster group.”

Anzalone’s performance left Breitbach beaming. “Bouncing back physically and emotionally from Chicago showed so much of Gabi’s character,” he says. “I think the Cal marathon was a great confluence of having some experience with the marathon, but also purposefully toning down the stakes and rolling with whatever came, on top of a great last few years of training, enabled Gabi to show what was within her.”

The California International Marathon capped a year in which Anzalone also won three road races, including a half-marathon in Green Bay in 1:14:51. That’s the third-fastest time ever run by a female Michigan high school graduate.
She was 16th of 7,800 female finishers in the National 15K (9.3-mile) Championships and the top female finisher with Michigan ties at the Crim Festival of Races for the second straight year. Anzalone was seventh among women overall, covering the ten-mile course in 56:32.

Anzalone accomplished all of that despite a busy schedule which included completing an internship at an outreach agency, pursuing a master’s degree, working part-time at a shoe store and coaching at Edgewood High School in Madison.

With Trials qualification behind her, Anzalone has eased her racing schedule in 2018, but did place third among women in a half-marathon in Champaign, IL in 1:15:59.

In June, she received her master’s degree and joined North/Eastside Senior Coalition, a Madison-area senior citizen agency, as a case manager. On weekdays, Anzalone gets in training runs prior to work followed by longer runs on weekends, some reaching 24 miles. Evening workouts are a part of some days. She also plays in a frisbee league twice a week.

“I’ve been learning what it’s like to try to prepare for races while working full-time,” she says. “Madison is a great community and an outstanding place to run among lakes and parks. I also love my work, so life is good.” 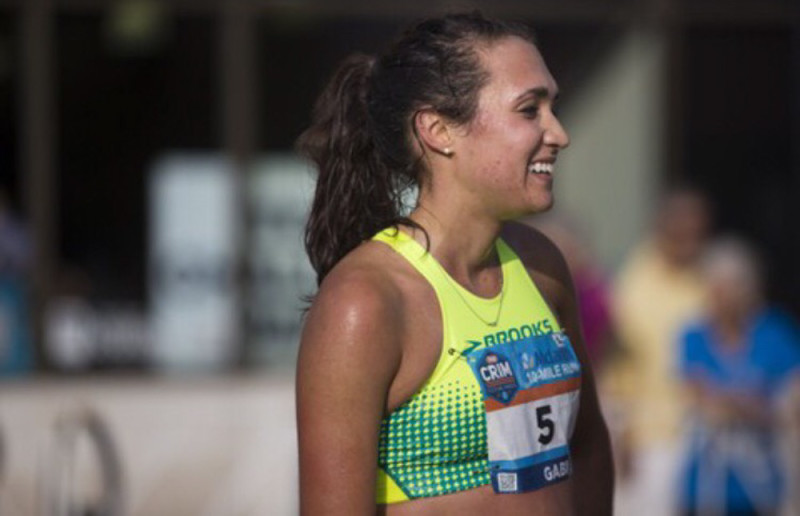 Anzalone returns to the Flint-area this month for the Crim and will attempt to finish among the top ten women for a third straight year. Her association with Genesee County’s premier running event began in 2002 when an eight-year-old Anzalone finished 96th of 581 participants in the one-mile run in 8:9. She ran the 5K the next four years, placing higher each time, including ninth among women in 2006 at age 13.

Anzalone then won the 8K (five miles) five years in a row (2007-2011). In 2010, she became the first female to win a Crim race overall, finishing in 29:13 and 34 seconds ahead of the first male finisher. College track and cross-country commitments kept her from the Crim until 2015, when she ran the signature ten-mile race for the first time, placing tenth among women before improving to third the following year.

“The Crim is special and I was excited to finally compete in the ten-mile,” Anzalone says. “I have great memories of runners I’ve met on the course who have helped me to some good times. Luckily, my coach agrees I should keep running the Crim, but it’s a hard race with the Bradley Hills section and other challenging spots. Getting to the bricks (on Saginaw St.) and heading to the finish never gets old.”

Anzalone was about seven years old when she took up running at the encouragement of parents Chuck and Doreen, also avid runners, who began entering her in road races. “My parents have always been active and ran one of the Crim races nearly every year, so they wanted to see if I liked running, as well,” she says. “From there, I started competing in more road races which led to track competitions.”

Anzalone became Grand Blanc’s No. 1 cross-country runner from her first high school race in the fall of 2007. She placed in the top five at the Division 1 State cross-country meet three times, including second as a senior, covering the 5K distance in 17:02.7, a little over a second behind Rochester’s Brook Handler. However, the time remains the fourth-fastest ever run in the 22 years the state meet has been held on the grounds of Michigan International Speedway. 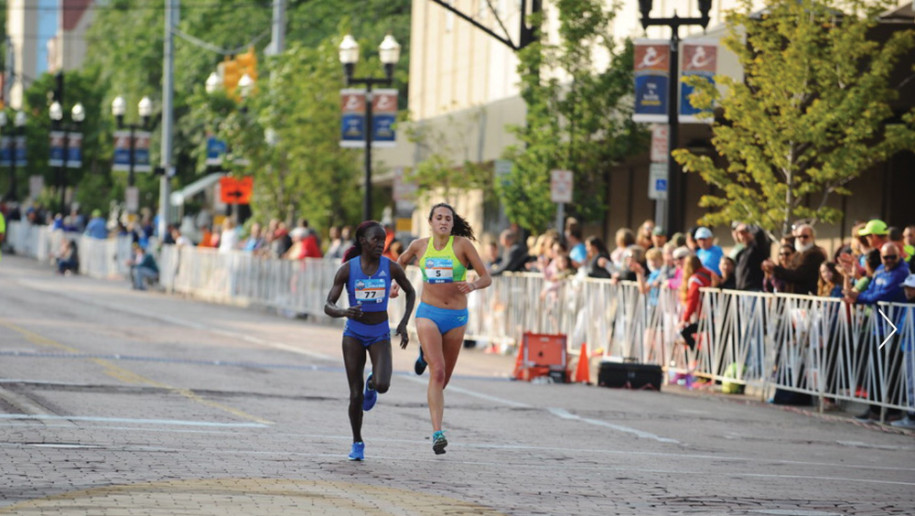 Gabi Anzalone secures 7th place among women by surging past Kenya’s
Lineth Chepkuri just before the finish line of the 2017 Crim 10-mile race.

On the track, Anzalone ran to four top-five finishes in the 3,200 meters at the state meet, including a state championship as a senior in 2011. She finished in 10:23.07, more than nine seconds ahead of West Bloomfield’s Erin Finn, a future nine-time All-American at Michigan.

At Wisconsin, Anzalone was among the Badgers’ top four cross-country runners in most races and qualified for the NCAA Championships all four years there. At the Big Ten Championships, she placed in the Top 10 twice and was twice named All-Region. Anzalone was also the Big Ten’s Co-Freshman of the Year. She finished in the top six in the 10,000 meters at the Big Ten Track Championships four times and was a three-time, top-20 regional finisher in the event.

Following this year’s Crim, Anzalone is tentatively planning to compete in the United States 20K Championships next month and the Twin Cities 10-Mile Race in October. Plans for 2019 include a half-marathon in Houston and the Atlanta Marathon. 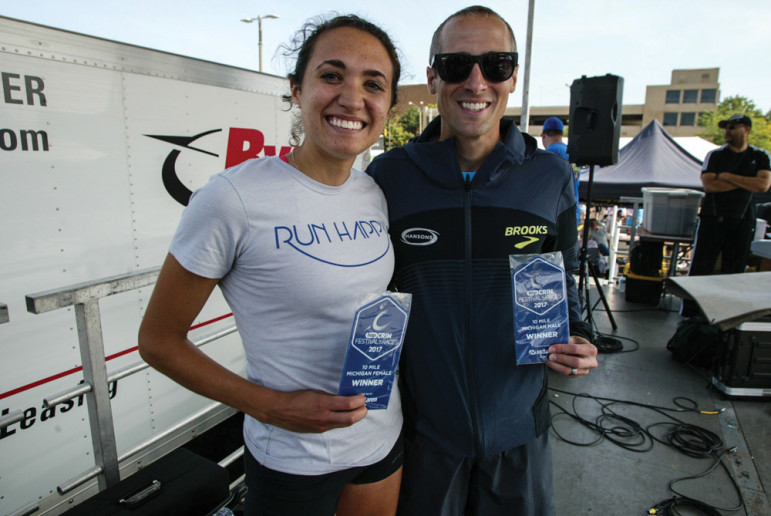 “One big goal is to make the Top 10 at a national road-racing championship, and it would be great to get under 2:34 in my next marathon and then be at 2:32 by the Trials,” Anzalone says. “I never want to put limits on myself, though.”

“Gabi has that essence of what makes a great marathoner because she is tough, gets better as the race progresses, and is not afraid of the work,” he says. “It’s a blast to coach someone like Gabi, because there are really no limits on how far she can go.”