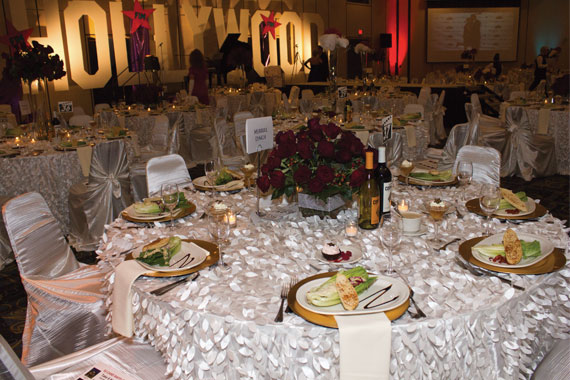 The Flint Institute of Music held its Annual Fundraising Auction on the evening of May 10 at Downtown Flint’s Riverfront Center. With a glamorous “Hollywood Nights” theme, the event included a silent auction, dinner, and a live auction. Greeted by a woman dressed as the legendary Marilyn Monroe, attendees were invited to pose on the red carpet with a vintage automobile on loan from the Sloan Museum.

Each year, The FIM fundraiser helps support local music, dance, and the theatre arts through the Flint Symphony Orchestra, Flint School of Performing Arts, and Flint Youth Theatre. Specifically, the proceeds help support students with partial or full scholarships to continue to nurture their talents. Several students of the abovementioned institutions treated the attendees to short performances throughout the night, including a theatrical soliloquy, a flautist, two pianists, and a solo vocalist. With the leadership of FIM Director of Special Events, Tina Immink, this year’s 35-member Auction Committee was co-chaired by My City Magazine Publisher Vince Lorraine and Dr. Gary Wease, MD. The opulent décor was created and provided by Brady Events and Marx Sisters Decorating Services.

Bob and Kelli McDowell of Flint are longtime supporters of the local arts. They were delighted to have the opportunity to help support FIM’s efforts through the auction, and they thoroughly enjoyed the display of talent shown during the night. “I thought it was very well done,” said Kelli. “The presentations were tasteful and the overall flow was exquisite.”

The silent auction included nearly 100 items up for bid, and the live auction featured 37 choice items, including weekend getaways to major cities throughout the world, tickets to major performances and events, and even a puppy from Adopt-a-Pet that went home with a new owner who generously bid $1,600. Through both auctions, over $116,000 was raised, matching previous years’ record donations and including nearly $72,000 for the Seeing Stars! tuition assistance program for the Flint School of Performing Arts. The money raised is a testament to the people of the Flint community, whose support for the arts is unabated.